As most readers of this blog know, Unaffiliated registered voters now outnumber registered Democrats or Republicans in North Carolina. This fact has been highlighted by print, television, and radio journalists across the state. We've written about it a few times ourselves.

How I did My Research

To find out more about unaffiliated candidates, I scraped the list of candidates who ran for partisan offices (nonpartisan elections are excluded) in every North Carolina election from 2010-2022. The raw data are available on the NCSBE web site here.

I then coded each candidate for the office they were running for, the factors associated with their election (number of candidates, number of seats open, etc.), and what happened after the votes were counted. The data that I refer to below are all available here.

Before getting to the analysis, I am required by the laws of pedantic social science to offer a few caveats:

Caveat 1: I can't speak to what happened prior to 2010. For example, The NC Association of County Commissioners indicates that 14 "independent" county commissioners were elected prior to 2010. I expect there are also a smattering of Unaffiliated candidates and winners for other offices after the introduction of the category in 1977, but prior to 2010. Unfortunately, I have no way of knowing who they were, what the details of their elections were, etc.

Caveat 2: I am only speaking to people listed on the ballot. It is possible that some other Unaffiliated candidates were elected in write-in campaigns. I just don't know

With those caveats out of the way, let's get to it.

Has the Number of Unaffiliated Candidates Increased?

One might think that in a time of massive increase in Unaffiliated voters, we would see a similar increase in the number of Unaffiliated candidates. Even with everything we know about the power of the two-party system, this Unaffiliated enthusiasm must have translated to at least some increase on the candidate side of the equation, right? 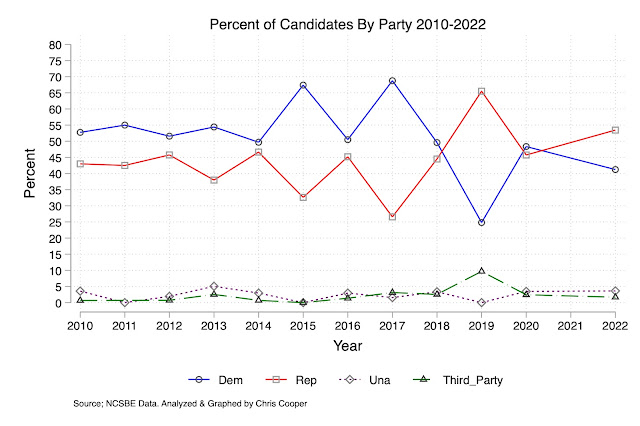 Quick side note: you may notice some weird blips in odd-numbered elections. Elections in odd years are...well...odd. There aren't many elections to start with and the ones that do occur tend to be non-partisan affairs. That's why the graph doesn't show any data for 2021; there was not a single partisan election in the state. The dearth of elections also explains the Unaffiliated candidate uptick in 2013, when about 5% of all candidates were Unaffiliated. While that may look comparatively impressive, there were only 79 candidates running for partisan offices statewide, so the total number of Unaffiliated candidates that year could fit into a Ford Fiesta.

If you want to see the trends with those pesky odd years removed, here you go: 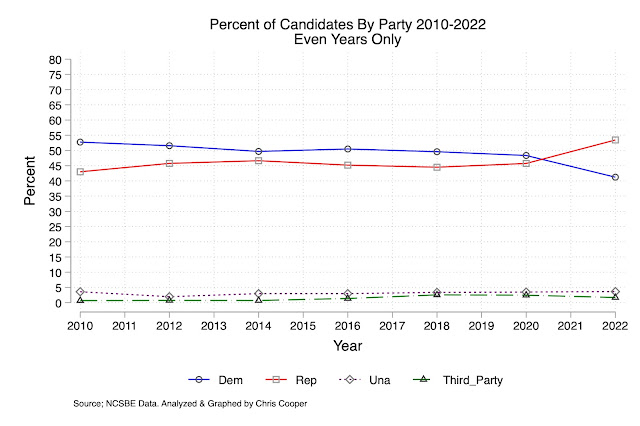 What Do Unaffiliated Candidates Run For?

From 2010-2022, 261 Unaffiliated candidates ran for partisan offices in North Carolina, that's 2.9% of the total number of candidates over that time period. 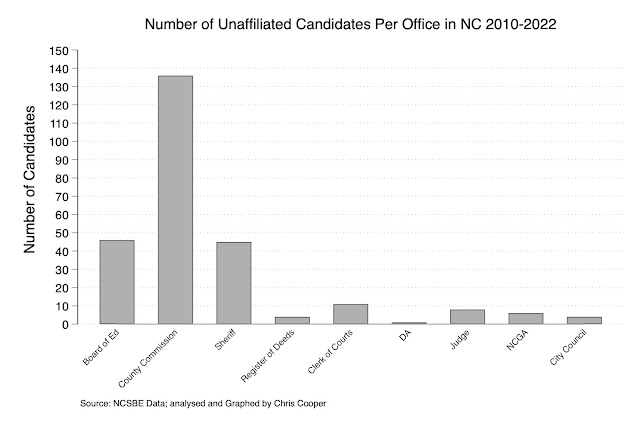 How Often Do Unaffiliated Candidates Win?

We now know that in the last dozen years, Unaffiliated candidates rarely run for office in North Carolina. But when they do run, how often do they win?

About as often as someone completes the Assault on Mt. Mitchell and feels like they've got another 100 miles in their legs. Which is to say, rarely.

It gets worse. In 9 of those 33 electoral victories, there were no Democrats or Republicans on the ballot meaning that an Unaffiliated candidate was guaranteed a victory before a single vote was cast.

When they do emerge victorious, they are most likely to do so as County Commissioners (16 electoral wins), followed by Board of Education (7 successful elections), Judge (4), and City Council (2). One Unaffiliated candidate has won for Register of Deeds, Clerk of Courts, District Attorney, and General Assembly from 2010-2020. No Unaffiliated candidate has won election for Sheriff throughout this time period .

This link includes the full list of Unaffiliated winners in partisan elections in NC from 2010 to the present. If there were a Hall of Fame for Unaffiliated Candidates, these folks would make up the inaugural class.

Simply put: it's hard to be an Unaffiliated candidate. Getting on the ballot requires a massive signature campaign. There is no party network to provide support. There is not even anyone on the State Board of Elections who shares an affiliation with "none of the above."

Every now and again Appalachian State beats Texas A&M in football. Sometimes Marshall beats Notre Dame (sorry, Susan Roberts). But these outcomes are notable because they're so unusual. Unless there are changes to make NCAA athletics more equitable, top athletes will still sign with the Aggies or Fighting Irish over the Mountaineers or the Thundering Heard.

And unless we change our electoral structures, most quality candidates will likewise continue to run with one of the two major parties.

Chris Cooper is the Madison Distinguished Professor of Political Science and Public Affairs at Western Carolina University. He tweets at @chriscooperwcu

[1] Perhaps because of the advantages afforded by partisanship, some of aforementioned Unaffiliated Hall of Fame members later abandoned their Unaffiliated status. Ben Scales (the sole Unaffiliated DA to serve in NC over these years) later switched his affiliation to Democrat, and Jack Debnam (likely the first Unaffiliated County Commission Chair in the state) recently chaired the Jackson County Republican Party. There are likely more examples; those are just two  I'm familiar with.
By Chris Cooper - September 19, 2022