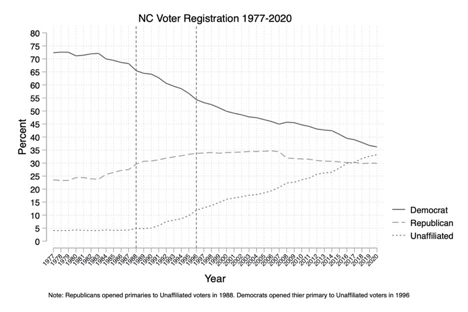 As of 2021, one-third of the state's registered voters are Unaffiliated, with 35 percent of them registered Democrats and 30 percent registered Republicans.

The figure also makes clear the effects of policy choices on party registration. In the first era, where Unaffiliated voters were shut out of the primary process, their rise was almost imperceptible—averaging an increase of only 2 hundredths of a percentage point per year.

Beginning in 1996, Unaffiliated voters could choose to vote in either both major party’s primaries and once again, the effects were clear. During this third era, Unaffiliated registration increased by .88 percentage points per year—the highest of the three eras. The same period also saw decreases in both Republican and Democratic membership (-.24 and -.67 percentage points, respectively).

Who are the Unaffiliated Voters in NC? 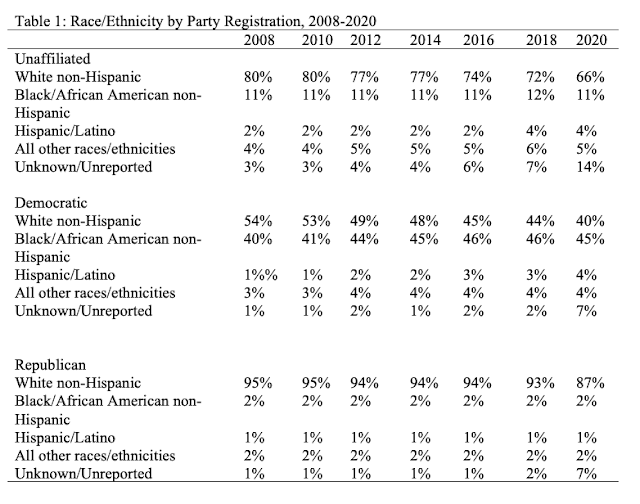 In 2018 and 2020, though, the difference between the Unaffiliated and the state-wide White non-Hispanic/Latino percentage points dropped to five and three percent, respectively, while the difference among Black percentages decreased to nine percentage points. However, the "unknown/unreported" race and ethnicity category was higher among Unaffiliated voters compared to the state (four points higher) in 2020. This is likely due to the North Carolina State Board of Elections' online voter registration portal not asking for a voter's race or ethnicity in 2020.

Another component of the data is to divide the party registrations into generation cohorts. Table 2 again presents the three largest groups, going back to the 2008 election, and gives the cohort break-downs (cohorts are defined by the Pew Research Center's generational cohort definitions): 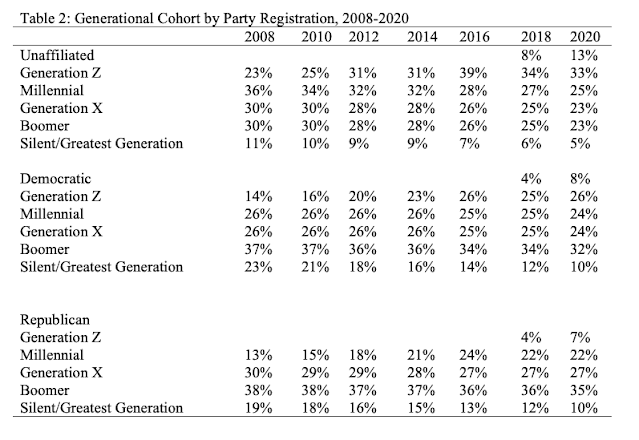 The rise of the Unaffiliated NC voter has been driven primarily by two cohorts: Millennials and Generation Z, those voters born after 1981. Yet this unaffiliated status wasn't the case with early Millennial voters.

Based on data from the Meredith Poll, we turn to analysis of a series of survey questions that attempt to understand the nature of public opinion in this key group of partisan registrants. Among other things, we are interested in exploring to what degree their public opinion might resemble one party or another. 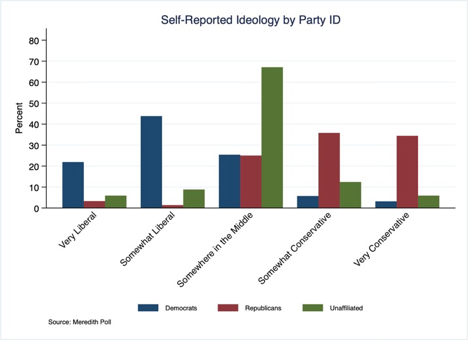 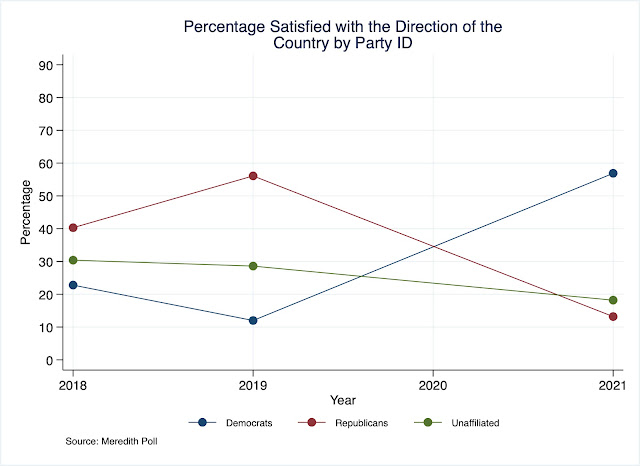 Unaffiliated registrants, however, respond less thermostatically—falling in the middle of both parties, regardless of which party is in control of the White House.

A majority of all partisans in three different polls reported believing that the current political parties do such a poor job that a third party is needed, with the exception of the Democrats in 2021 (but it’s close at 47%). 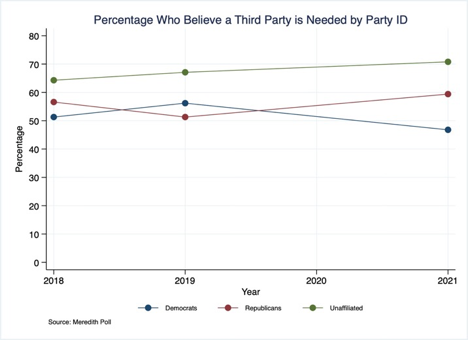 However, Unaffiliated voters have reported that they believe a third party is needed at higher levels than Republicans and Democrats. This is understandable given that Unaffiliated voters are, by definition, not tied to either of the two major political parties.

Interestingly, since 2018, the number of Unaffiliated voters who feel this way has slowly but steadily increased. This is likely related to our other findings on the sharp increase in Unaffiliated voters in North Carolina, because those who would become so disenchanted with a party that they would deregister as a partisan and choose to become Unaffiliated would likely believe that a third party is necessary.

We also asked two policy questions to see if the Unaffiliated voters would be better described as “leaners” or “light” partisans. The first question involved whether the respondent believed it was important for the United States to raise taxes on households making over $400,000, which is a Democratic proposal that might make it into the current infrastructure bill. 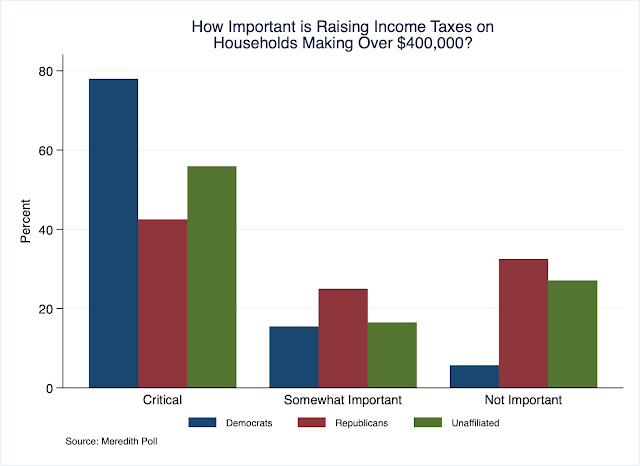 The second policy question was about the importance of community college, which is another Democratic proposal that has been floated for several years but was recently removed from the current infrastructure bill. Again, more Democrats find this issue critical or important than Republicans and Unaffiliated voters, and Republicans are more divided. 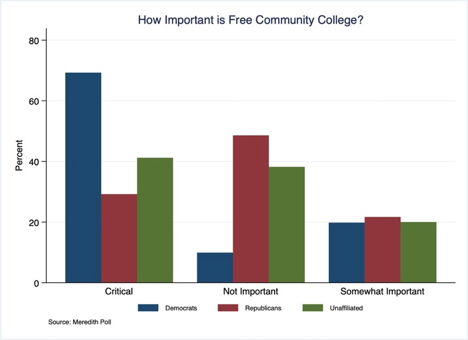 This time, though, a plurality of Republicans believe free community college is not important, and only 29% find it critical or important. Unaffiliated voters hold views more similar to Republicans on this issue as well.

With the continued rise, and likely assumption of the largest voter block in North Carolina sometime in 2022, many have asked the question: how do registered Unaffiliated voters vote?

To address this question, we computed an electorate composition percentage for registered Democrats, Republicans, and Unaffiliated voters, along with the two-party precinct vote percentage Donald Trump in the 2020 presidential election contest. To visually assess what, if any relationship, might be present, we analyzed the data through scatterplots of partisan voter composition for each presidential candidate. 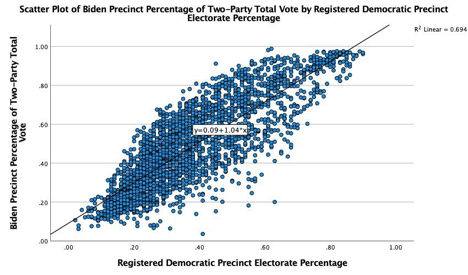 The same dynamic was found in the following figure with the Registered Republican Precinct Electorate Percentage and Trump's Two-Party Precinct Vote Percentage, though the adjusted r-squared value was much higher (0.827). 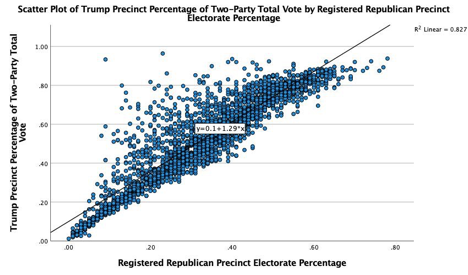 Next, we estimated a scatterplot for the precinct-level electoral composition measure of registered Unaffiliated voters on the Trump vote in 2020. 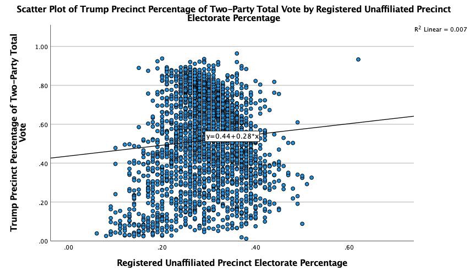 This suggests that as the percentage of Unaffiliated voters (again, the fastest growing group of registered voters in the state) increases, they tended to lean more Republican in the 2020 Presidential election. Further analysis of this dynamic is needed on this question, and is a project for the future.

A final analysis of registered Unaffiliated voters took a look at those who consistently voted in a party primary election for 2012, 2016, and 2020, using the November 2020 voter registration data and voter history data files.

Yet there are stark differences in the composition of those party-primary Unaffiliated voters, as shown in the following table: 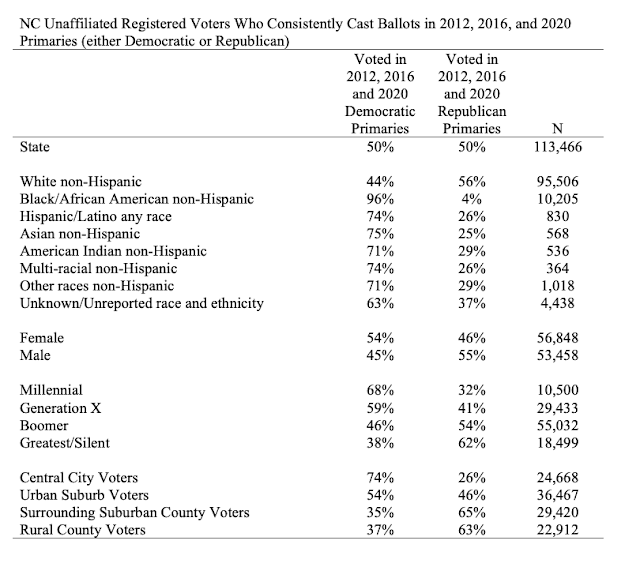 So What Does All This Tell Us About NC's Registered Unaffiliated Voters?

A significant question in the state's politics is, where do these registered Unaffiliated voters tend to lie in their partisan identification? While additional research needs to be conducted, we find an equally divided group of Unaffiliated voters splitting their party preferences, reflecting the intensely competitive nature of the state's overall political dynamics.

Further research, perhaps utilizing the percentage of a precinct's electorate that is Unaffiliated and casting votes in general elections, would be another potential way to measure how Unaffiliated North Carolina voters are deciding their partisan support.

A review of public opinion data reflects similar trends—Unaffiliated voters in North Carolina are not simply closet partisans. They hold distinct political beliefs that fall somewhere between the two major parties on most issues. Indeed, the only example where they do not fall within the two major parties is on the question of the two-party system itself, where Unaffiliated voters are, perhaps not surprisingly, less than enthralled with the current system.

Altogether, this exploration suggests that the rise in Unaffiliated voters is a trend that should not be ignored and Unaffiliated voters do hold distinct political views, on average. The two major parties should pay attention to this trend and attempt to arrest its development—not only because of what it means for profiling potential voters, but also for what it means for party organization and candidate recruitment, the lifeblood of political parties.

With apologies to American Express, the two major parties need to explain why “membership has its privileges,” lest they, too, will be shut out of important markets.

All of the authors contributed an equal amount to the research and writing of this project, and are their interpretations of the data and analyses.
By OldNorthStatePolitics.com - November 22, 2021