by Michael Bitzer and Christopher Cooper

As you can see from the graph below, the rise of Unaffiliated voters has been a long build that has only recently come to fruition. Unaffiliated voters hovered around 5 percent of the North Carolina electorate from 1977 (when the Unaffiliated category was first established) until 1988 when the Republicans first opened their primaries up to Unaffiliated voters. Prior to 1988, registrants were welcome to register as Unaffiliated, but doing so would lock them out of voting in any primary.

The Unaffiliated share of registered voters began to grow in 1988, but truly took off in 1996 when the Democrats opened up their primaries as well, creating the semi-closed primary system we have today. In September 2017, Unaffiliated crossed Republican to be the second largest group in North Carolina politics and, as of last week, they eclipsed Democratic registrants. 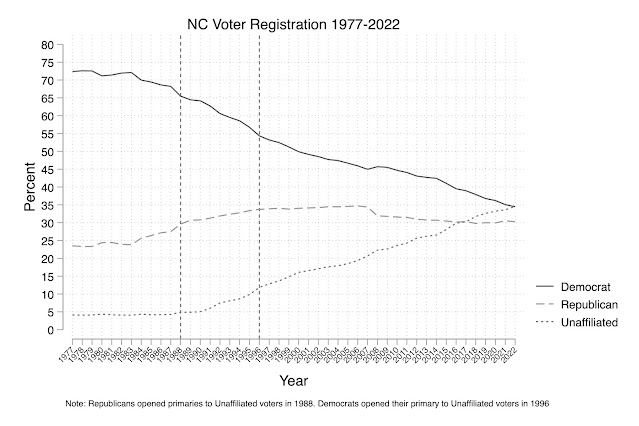 Political parties in North Carolina have considerable control over which voters get to vote in their primaries. After a US Supreme Court decision affirmed the right of state parties to open up their primaries to Unaffiliated/Independent voters, the North Carolina General Assembly followed suit in 1987 by passing House Bill 559, which gave political parties the right open up their primaries if they wished. Almost immediately after its passage, the Republican Party changed their primary rules to allow Unaffiliated voters to participate in their primary, a move that took effect in the 1988 election (first vertical line above)

According to Republican operative Carter Wrenn, the move would "strengthen the Republican Party because a lot of conservative Democrats would support a conservative candidate in the Republican Party." The Democrats were less enamored with the idea. State Democratic Party Chair James Van Hecke argued "That's why we have political parties. If folks want to participate in primaries, they ought to register and be part of a party" (both quotes from articles by the inimitable Rob Christensen).

It was not until 1996 (the second vertical line above when the Democratic Party rolled out the welcome mat to Unaffiliated voters. Even then, though, the view was far from unanimous. Democratic Executive Committee member Lavonia Allison cited fears that Unaffiliated voters, who were mostly white might "dilute the influence of blacks." Others feared "electioneering mischief." The majority Democratic position was perhaps best summarized by Democrat Herbert Hyde who put the decision in starkly political terms, admitting "we have been outmaneuvered by the other party...they have made it look like they are inviting people into their party."

When Did Counties Start to Flip? 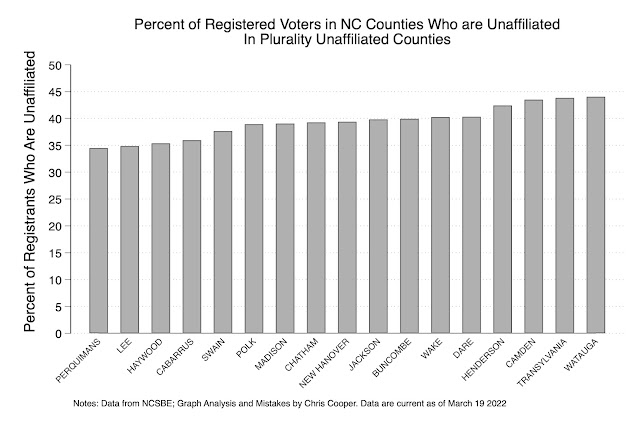 North Carolina is not alone in experiencing the dramatic rise in registered voters who do not select either of the two major parties. There are 31 states where voters register by party and Unaffiliated/Independent voters can vote in either primary in 22 of them. Unaffiliated/Independent voters are a plurality in 8 of those states, and the second largest group in 9. Clearly this the increasing popularity of Unaffiliated voters is not limited to the Old North State.

This age differential is also reflected in the generational cohorts within the state's voter pool, as shown by this next chart. 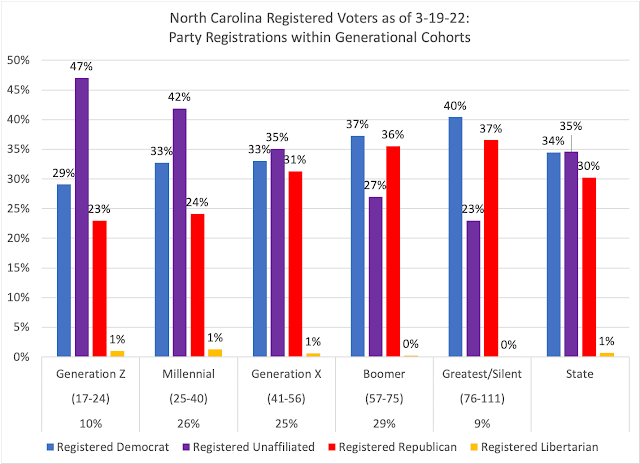 Voters at or under the age of 40 have been the primary drivers of the rise of Unaffiliated voters in North Carolina, with the youngest generation, Generation Z, nearing a majority going with no party affiliation in their registration status. Among older voters, partisan registration dominates, with three-quarters of Boomers and the oldest voters (Greatest/Silent) registering with a party. Generation X serves as a bridge between the respective non-partisan vs. partisan generations and mirroring the state-wide dynamics.

The racial dynamics of North Carolina voters show distinctive trends as well, as noted in the following chart: 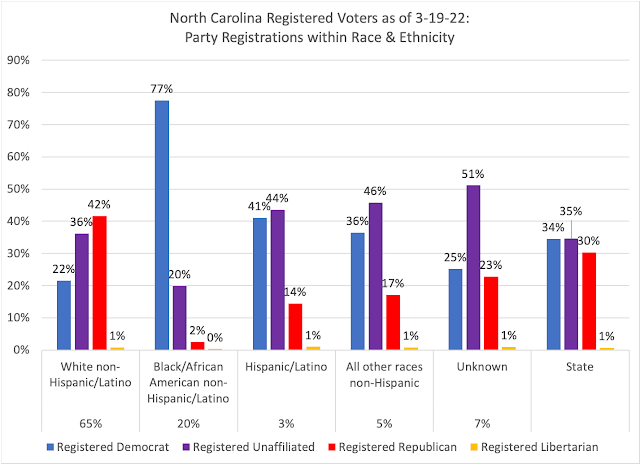 Among White/non-Hispanic voters, registered Republicans command a plurality, but the growth of the Unaffiliated, now at 36 percent, shows a tightening between the two. Among Black/African American (non-Hispanic), the historic legacy of Democratic Party affiliation is still very evident; however, two out of ten Black North Carolina voters are registered unaffiliated--more on that aspect in just a moment.
Among Hispanic/Latino and other voters of color, Unaffiliated status now dominates: for Hispanic voters, 44 percent are Unaffiliated, with 41 percent Democratic and 14 percent Republican. Among all other races (Asian, American Indian, Pacific Islander/Native Hawaiian, multi-racial and all other races), 46 percent of them are registered as Unaffiliated. Among those voters who didn't identify either a race or ethnicity, over half are registered Unaffiliated.
When breaking the voter registration by race/ethnicity and generation cohorts, one can see that all racial & ethnic groups are being influenced by younger voters. Among the newest generation, Generation Z, voters who are White/non-Hispanic, as well as those who are Hispanic/Latino, are nearing half of their registrations as Unaffiliated, and among Black/non-Hispanic voters, their Unaffiliated percentage is now over one-third. 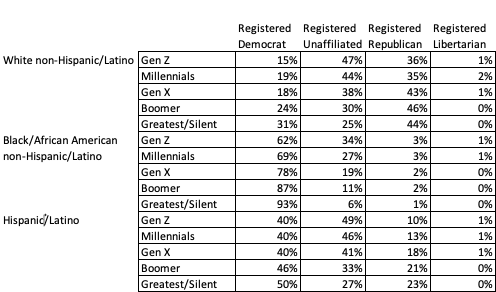 This break in partisan registration is notable among key racial and ethnic groups by generations. Democratic party registration is declining significantly among White non-Hispanic voters who are Gen X, Millennials and Generation Z, even though the general party identification among the two youngest cohorts show a strong Democratic party identification, as documented by Pew Research Center in 2020. Another key trend is among Millennial and Gen Z Black/African Americans, with over one quarter of Millennials and one-third of Gen Z going unaffiliated. This breaks the historic trend of Democratic loyalty and dominance as evident by older Black voters.
Finally, among Hispanic/Latino voters, the dilemma is on the Republican party registration side, with less than 15 percent of Millennial and Gen Z Hispanic voters registering with the GOP. Democratic party registration is steady at 40 percent, while nearly half--49 percent--of Hispanic Gen Z registered voters have gone unaffiliated.
The last analysis of registered Unaffiliateds, in comparison to their partisan registrants, is by North Carolina's modern 'regions,' namely central cities, urban suburbs, surrounding suburban counties, and rural counties.
The first chart shows the distribution of the party registrations across the four regions. 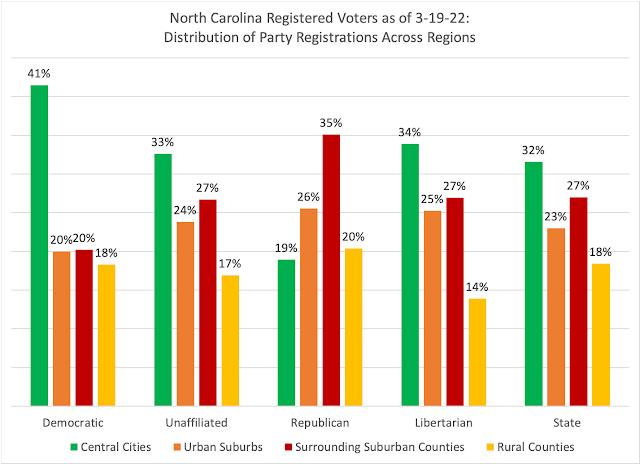 Both registered Democrats and Republicans show an 'imbalance' among their voters across the four regions: over 40 percent of Democrats are in the central cities of the state, while 35 percent of Republicans are in surrounding suburban counties. This represents the regional base of both parties.
For Unaffiliated voters, they mirror the state's geographic distribution within the regions, so we can say they are fairly distributed across the state in the voter pool.
In flipping the analysis, this next chart displays each region's party registration and distribution, again showing the geographic bases of both the Democratic and Republican parties: 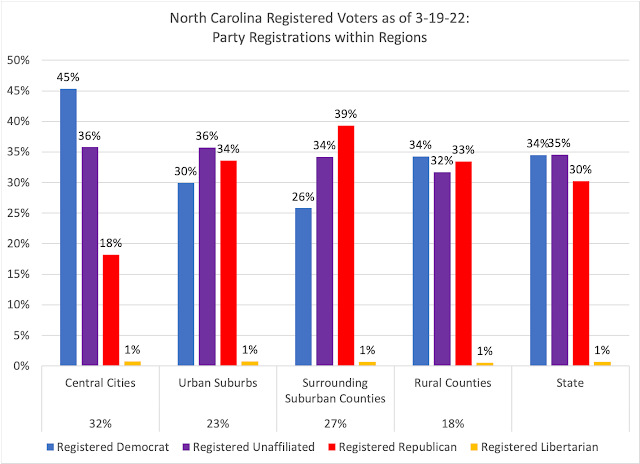 Only 18 percent of central city voters are registered Republicans, with 45 percent of those city voters being registered Democrats. Among surrounding suburban counties, registered Republicans dominate (nearly 40 percent) while a quarter of those voters are registered Democrats.
While distributed across the regions, Unaffiliated voters have become the plurality of voters in the urban suburbs, which is the most competitive area of the state in elections. In the other three regions, Unaffiliated voters will play a major role in how those regions move, either stronger to one party or towards a more competitive nature.

More analysis needs to be done on North Carolina's Unaffiliated voters now that they command the lead group of registered voters in the Old North State. Along with Drs. Susan Roberts and Whitney Manzo, this will be something we at Old North State Politics will continue to investigate and try to explain more about the role and political behavior of Unaffiliated voters in North Carolina.
One important aspect that needs further exploration: while Unaffiliated voters may command the largest group, they are often the group with the lowest voter turnout rates. Tracking from 2008 to the 2020 general elections, registered partisans are often at, if not exceeding, the state's overall registered voter turnout rate. 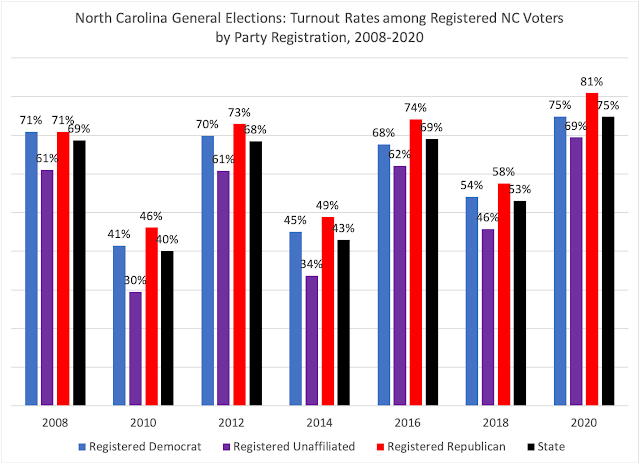 For the two major parties, we would note that they should pay attention to this trend and attempt to arrest its development—not only because of what it means for profiling potential voters, but also for what it means for party organization and candidate recruitment, the lifeblood of political parties.
With apologies to American Express, the two major parties need to explain why “membership has its privileges,” lest they, too, will be shut out of important markets.

Dr. Michael Bitzer holds the Leonard Chair of Political Science and a professor of politics and history at Catawba College; he tweets at @BowTiePolitics.

Dr. Christopher Cooper is the Madison Distinguished Professor of Political Science and Public Affairs at Western Carolina University; he tweets at @chriscooperwcu.