The following text was provided to this blog by the authors of The Almanac of American Politics 2020 Edition, who retain copyright for this material and assume responsibility for the content:

In few states today is the political climate more polarized between Democrats and Republicans--and between rural, urban and suburban areas--than in North Carolina. Bolstered by rapid population growth from other states, North Carolina, and particularly its suburban areas, has become a hard-fought battleground, especially over the direction of state government. Beginning in 2010, North Carolina Republicans enjoyed large legislative majorities and increasing success in winning races at all levels. But in 2018, after seemingly endless battles over control of the state’s levers of power, voters dialed back their support for Republicans, electing enough Democrats to break the GOP’s legislative supermajorities, and in turn bolstering Democratic Gov. Roy Cooper’s leverage in policy debates. 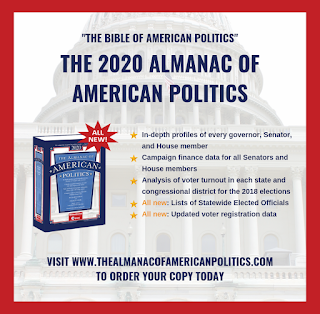