Now that the "final" calls on various states have been made (but some NC races are still too close to call), the four of us gathered for our post-Election 2020 vlog where we breakdown some key takeaways and preliminary insights, and what we want to study some more about this consequential campaign season.

Or, if you want to listen as a podcast, check us out on SoundCloud: https://soundcloud.com/michael-bitzer-622617495/old-north-state-politics-post-election-2020-podcast

The election is over. Well, mostly. Sure, the President hasn’t conceded, we will have recounts for a variety of offices in North Carolina, there might be some litigation (it is North Carolina after all), and we don’t have individual level data on who voted (for that, we have to wait for the holy grail of North Carolina politics, The Voter History File, to be updated). Despite these significant limitations, there are a few conclusions that I feel (fairly) safe to make at this admittedly premature stage.

2020's Election Is All But Done...Except for Tuesday's Voting and Counting

The nation, and North Carolina, have finally arrived at this point: just two days before the final votes are cast in Election 2020, and then the counting begins on what is shaping up as a historic election, by pretty much any standard.

The level of early voting--with estimates of over 90 million ballots cast nation-wide before Tuesday, November 3--is certainly one for the record books, and especially in North Carolina's period of early voting, made up of both absentee by mail and absentee onestop, which most refer to as 'early voting in-person.'

According to the U.S. Election Project, as of Sunday, Nov. 1., two-thirds of all the votes cast in 2016 have been already submitted in the 2020 election.

In North Carolina, 2020's early ballots are 95 percent of all the votes cast in 2016, which equates to nearly 62 percent of the 7.3 million registered voters having already voted as we head into Tuesday's general election. It would only take another 238,000 voters to match 2016's total ballots cast; that 238,000 would be just 3 percent of the current 7.3 million, equating to 65 percent voter turnout.

If past presidential election years are any indication, we should see registered voter turnout at least 69 percent: 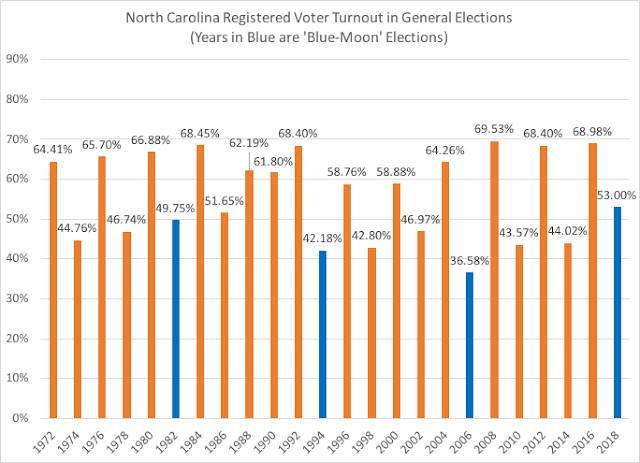 In a realistic scenario, North Carolina could be looking at a low to mid-70 percent turnout rate when the polls close Tuesday night; meaning, anywhere from a potential 725,000 to 943,000 voters could show up on November 3, and that would give the state either a 72 or 75 percent registered voter turnout rate this year.

So, here are a number of data points about what we know about NC's early votes, who has cast ballots so far, and what we should expect come Tuesday's final voting. Be prepared for a deep data dive into the numbers.

How many North Carolinians have early voted?

Welcome to the third episode of the Old North State Politics vlog, along with a podcast version.

On this episode, we spend some time talking about Election 2020, where we've been (exhausted) and where we may be headed (hopefully to a quick resolution post-Tuesday).

If you want to watch the video, you can click below or go to YouTube and watch it there.

And if you want to listen to it as a podcast, check out the episode on SoundCloud.

Here's What We're Thinking About for November 3rd

Instead of a traditional run-down on the presidential and gubernatorial contests, the four of us decided to take a slightly bigger picture, and pose a series of questions about "what we're thinking about when November 3rd finally rolls around?" Here are some of our thoughts about what to be looking for and thinking about on the night the polls close; we didn't coordinate our questions and answers among ourselves, so if there's repetition, it's a pretty good bet that the topic is something worth considering very strongly. And yes, we could potentially disagree with each other, but we'll let the readers try and figure that aspect out. 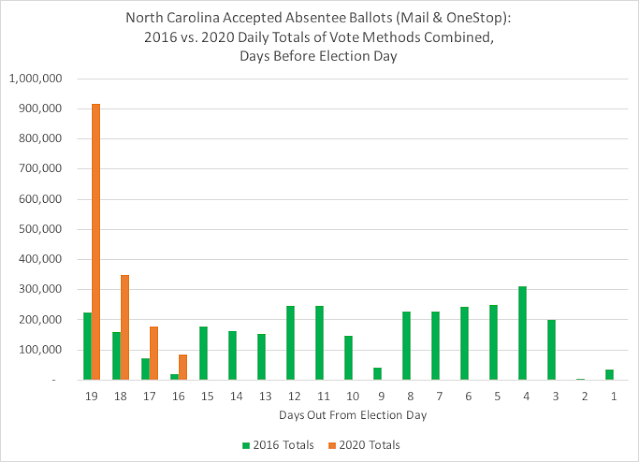