The second of a series leading up to November's general election where I wrap up the political week that was with WFAE during Morning Edition, with a focus on the US Senate race in North Carolina between Richard Burr and Deborah Ross.
By OldNorthStatePolitics.com - August 27, 2016 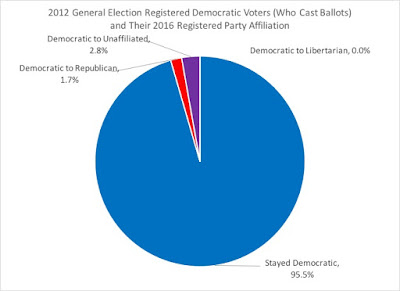 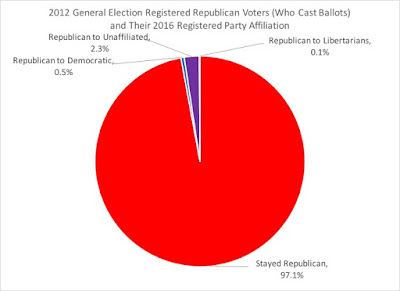 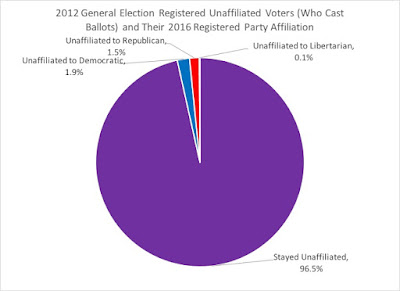 In looking at the July 30, 2016 data file from the North Carolina State Board of Elections of the 6.6 million registered voters, I began to explore the impact of the past four years of registration, as it stands on July 30.

In doing so, I isolated the pool of active and inactive (those who have not confirmed their registration or failed to vote in two federal elections, but can still cast a ballot) voters into two groups: those who have registration dates up to, and including, 2012, and those who registered since January 1, 2013.

In the July 30 voter pool, 5.4 million voters, or 81 percent of the total pool, were registered before or during 2012, with 1.2 million, or 18 percent, registered since the beginning of 2013.  This does not include those voters who have been removed for various reasons (death, etc.), who are temporary registered, or removed for other reasons (see this FAQ from the NCSBE for more information).

One area of interest that I have is the impact of the changing generation cohorts within the registered voter pool. State-wide, the total voter pool has a plurality of Baby Boomers (those born between 1945 to 1965), at 34 percent, with Millennial voters (those born after 1981) at 29 percent, Generation Xers (born between 1966 and 1980), at a quarter, and those of the Silent Generation (born before 1945) at 12 percent.

For those NC voters who registered before and then after 2012, the generational impact is quite striking. 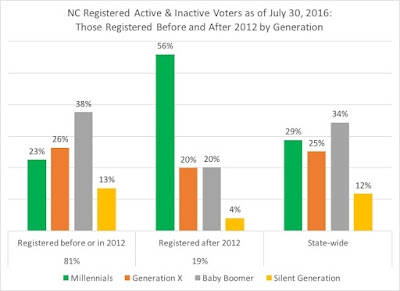 Taking the pre- & post-2012 registration groups, I then analyzed the party registrations for the current pool of NC voters: 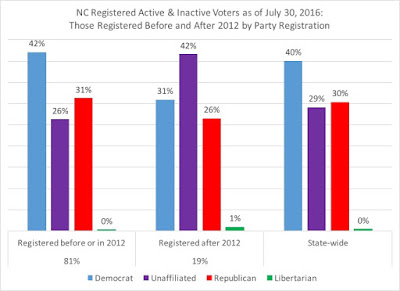 The rise of the 'unaffiliated' voter in North Carolina has been significant, but this indication of the post-2012 registration division by party is most notable. Here's the 2013-2016 (as of July 30, 2016) party registration data: 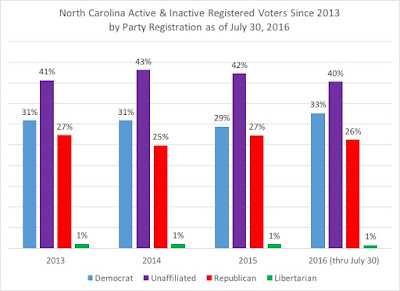 Next, I analyzed the two registration groups by their racial identification: 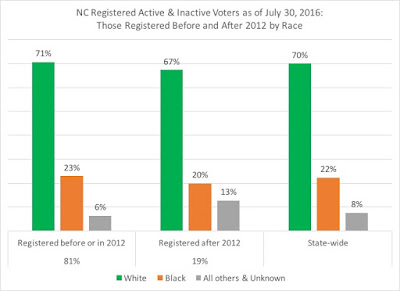 The notable rise of post-2012 "all others & unknown," and the declines in 'white' and 'black' voter registration, will most likely continue to diversify the North Carolina electorate. This diversification will also be due to the rise of the Hispanic-Latino voter: Finally, I isolated the Millennial Generation and explored their party registration within the pre- and post-2012 registration groups: 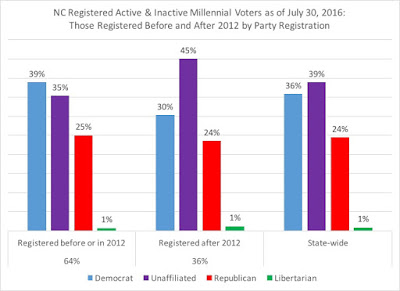 With two more months of voter registration (barring a ruling by the Supreme Court of the United States regarding NC's election law overhaul), estimates should put the voter registration pool (i.e., the eligible voters to cast ballots in November) at somewhere in the neighborhood of 6.8 million. Further analysis to see which of these voters will actually show up in November, but the continuing change in North Carolina's voter pool will be one to watch leading up to November.
By OldNorthStatePolitics.com - August 24, 2016 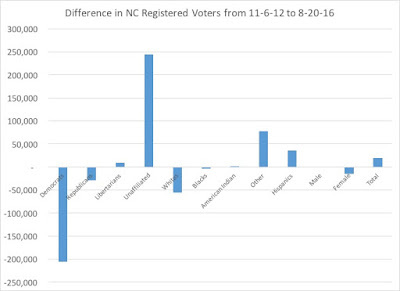 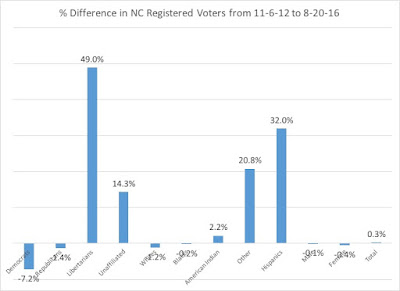 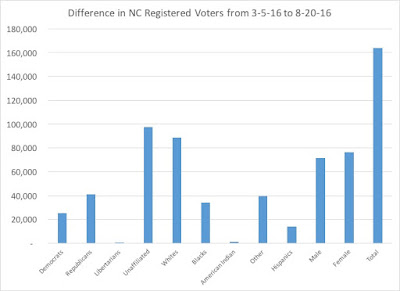 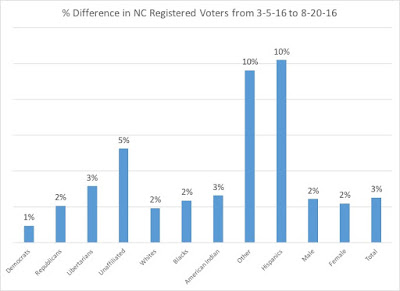