I found this article on "A Quiet Exodus: Why Blacks Are Leaving White Evangelical Churches" to be an interesting exploration of the controversies surrounding evangelicalism in today's political environment.

In particular, Michael Emerson, co-author of "Divided by Faith", a study that explored the racial relations within the evangelical movement, said in the article:

"Everything we tried is not working. ... The election itself was the single most harmful event to the whole movement of (racial) reconciliation in at least the past 30 years,” he said. “It’s about to completely break apart.”

Much has been made about the support by most white evangelical voters to President Trump. In fact, one of the president's evangelical advisory board members said recently:

This tension between what many see as the violation of Christian principles and values for a candidate who supporters believe may not necessarily be one of their "flock" but will pursue evangelicals’ policy issues has become a main source of trying to understanding this paradox of faith in light of today's partisan divides.

In the 2016 American National Election Study (ANES) of the national electorate, questions were asked of the respondents' religious faith and identity, along with a multitude of other questions. I decided to investigate those respondents who identified as "born-again" Christians on a series of questions asked, along with comparisons within the evangelical/born-again Christian respondents based on race and ethnicity. First, the numbers of born-again Christian respondents within the survey was 1,408, with the following percentages of their self-identified racial and ethnic categories: 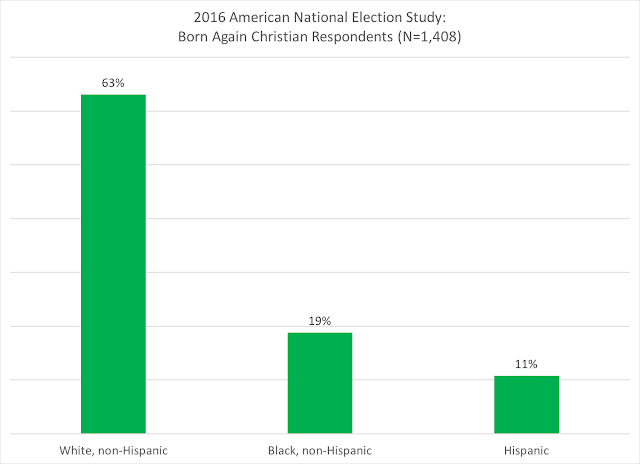 In comparison to to the total number of Christian respondents, born-again Christians were 47 percent of the respondents; among each racial and ethnicity group: 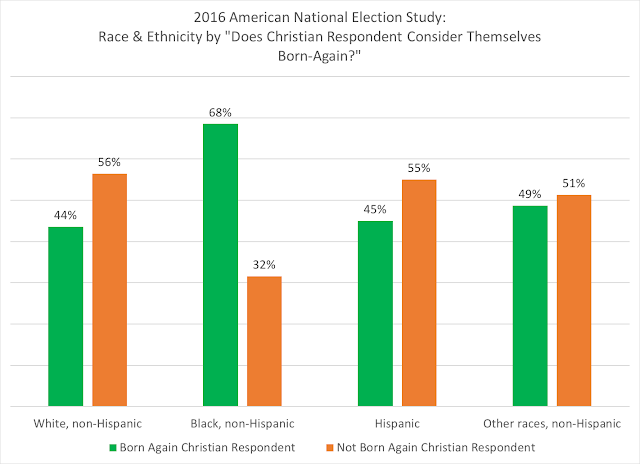 While a lot of attention is paid to "white, non-Hispanic" evangelicals, over two-thirds of black Christians consider themselves born-again Christians in 2016's electorate.

Next, I examined the self-identification of both born-again and not born-again Christians based on their ideology, partisanship, and presidential vote choices. 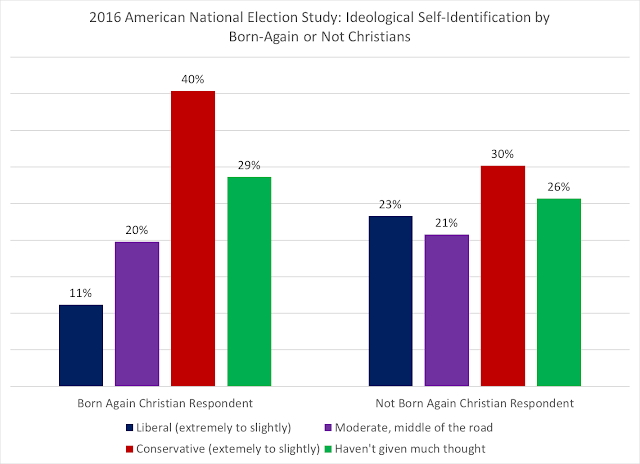 Among partisan self-identification between born-again and not born-again Christians in 2016's electorate: 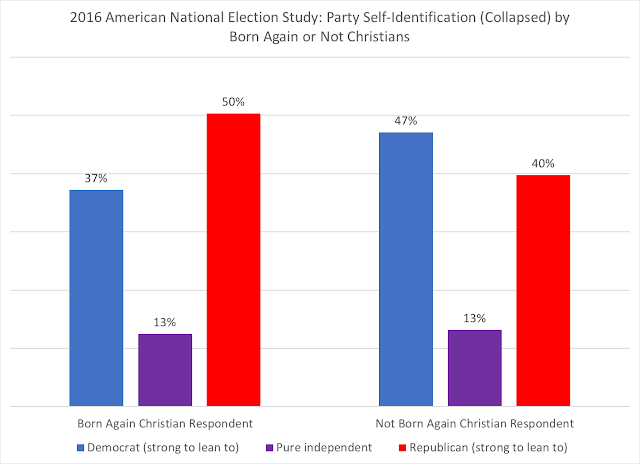 Finally, both groups were compared when it came to their presidential vote choices: 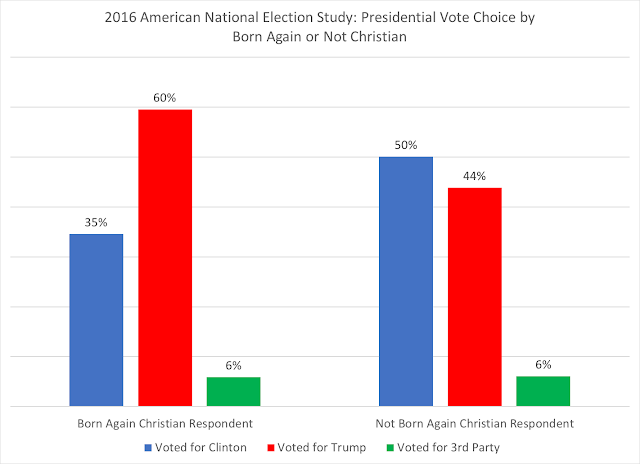 I then dug into those born-again Christians and separating out white non-Hispanic, black non-Hispanic, and Hispanic voters. A few questions asked about their religious practice, so I wanted to gain a sense of how different or similar race and ethnicity played within the born-again Christian community in the 2016 electorate.  One question asked was "how much does your religion provide guidance in day-to-day living?" Among the most faithful, one would expect to see a fairly high response to this fundamental question about faith and daily living: 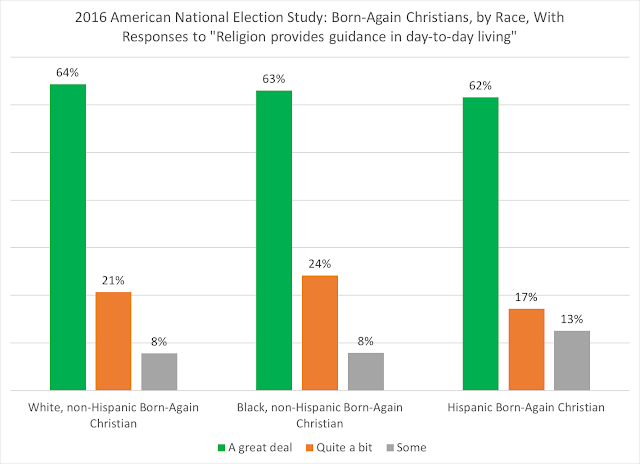 For the most part, there was no clear difference between racial and ethnic lines among born-again Christians when it comes to their religion guiding their daily living.

Another question asked on the ANES was whether they saw the Bible as the word of God, or something else: 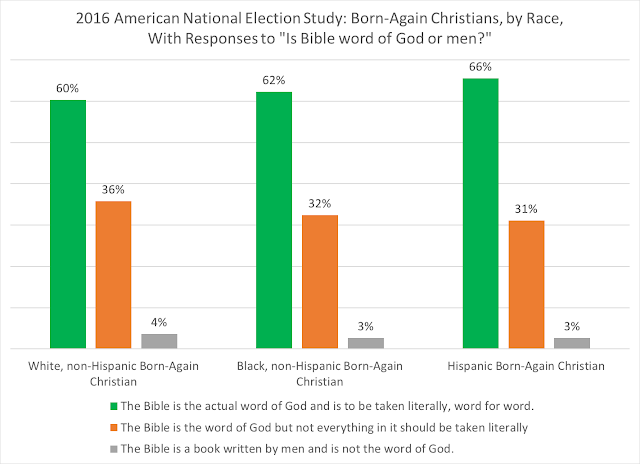 Among ideological self-identification, white non-Hispanics are very clear in their ideological perspective: 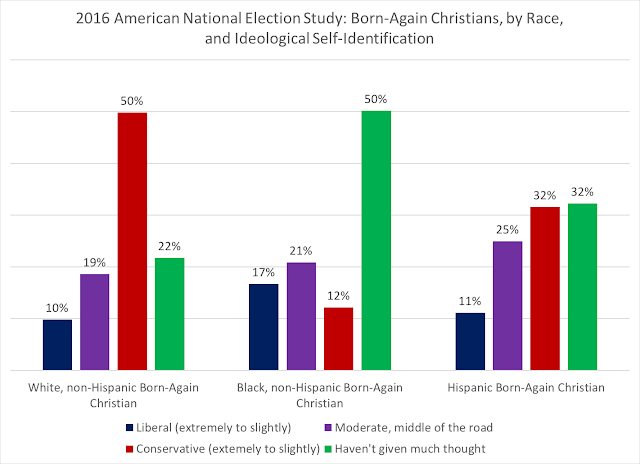 Among partisan self-identification within born-again Christians by race and ethnicity: 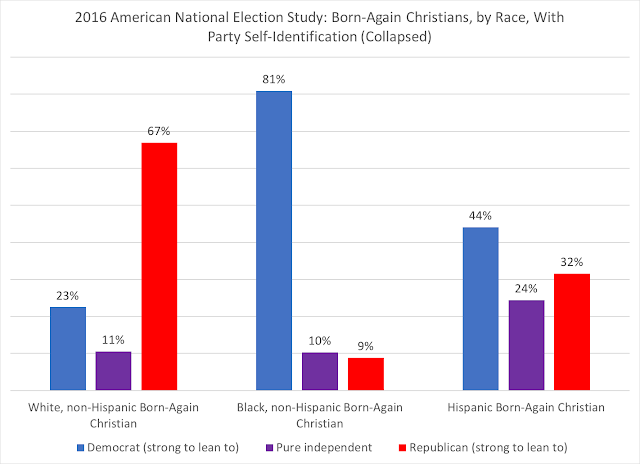 Finally, in breaking out the presidential vote choice by race and ethnicity among born-again Christians: 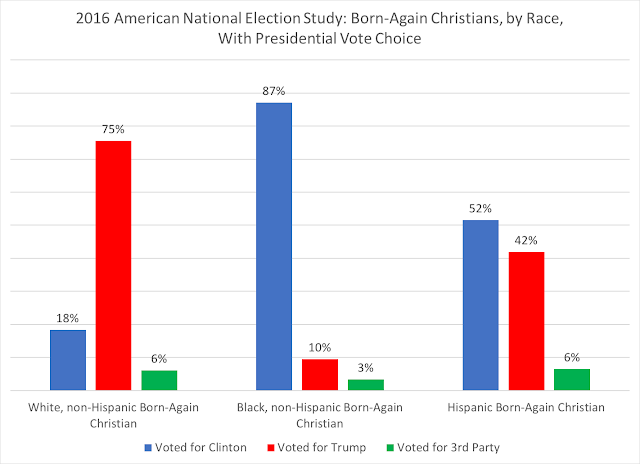 Again, black/non-Hispanic voters demonstrate the strong loyalty to Clinton as the general black voter population, but three-quarters of white/non-Hispanic born-again voters cast their ballots for Trump, while among the overall white voting population, Trump received 53 percent of the vote, per ANES.  Among Hispanic voters, 70 percent of them voted for Clinton in the 2016 ANES, while only 52 percent of Hispanic born-again Christians voted Democratic.

Two interesting questions spoke to how voters viewed the presidential candidates, both of whom were seen as not the most "presidential" when it came to fielding candidates by the major parties.

The first question was about the presidential candidates and their honesty, with one of the responses being "not well at all" when it came to honesty: 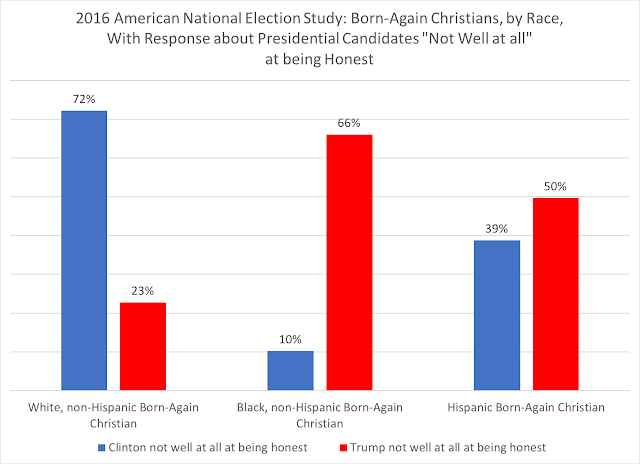 The second fascinating question was about whether each of the major presidential candidates had feelings of "disgust" by the respondents: 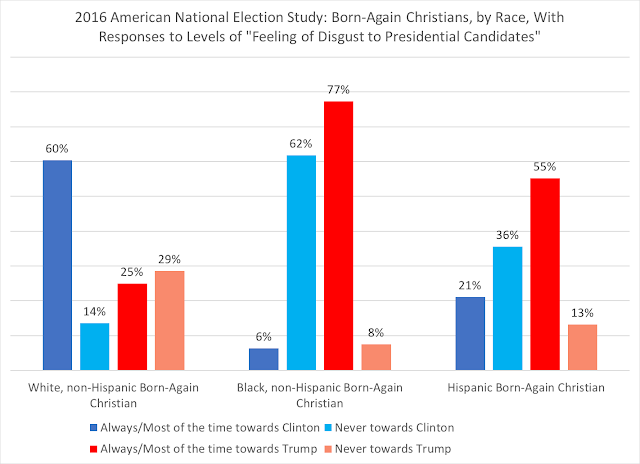 It's not surprising that the white and persons-of-color evangelical movements are splitting over their partisan divide, even though they share a great deal in common with their religious faith and beliefs. The commitment that white evangelicals have towards Donald Trump makes most observers scratch their heads in disbelief, especially in trying to reconcile the moral with the political. That notwithstanding, as Robert Costa points out in "Trumped!",  the 2016 election showed that:

"Evangelicals were looking at Republican (primary) candidates and the waning interest they had in finding someone who was just like them. Trump didn't speak in their political language or cadence, and he had in the pst backed liberal positions, but he was disruptive to the political class that they viewed uneasily, especially with regard to religious liberty. ... Evangelical and others in their sphere had changed "their tune on morality" to Trump's benefit." (page 104)

Ultimately, white evangelicals sought a presidential candidate not of their spiritual cloth, but for someone who would advance their partisan and political agenda, even with the moral baggage that may cause some of strong religious faith to question that candidate. Born-again persons of color, even with their similarity to white born-again Christians, held very different partisan views, and thus the divide is not surprising when reviewed in light of the above responses.