In the previous post, I looked at the dynamics of voter registration within North Carolina's 13 congressional districts. This post begins a two-part review and analysis of the state's General Assembly districts, first with the 50 districts in the state senate. With much of the attention being paid to NC's congressional districts in this "blue-moon" election cycle, the state legislative races will command state-wide attention, with the Democrats attempting to at least break the Republican's super-majority numbers in both chambers.

The map of the most recently approved upper chamber districts:

Like with the congressional districts, this analysis looks at five demographic aspects for each district: the district's percentage of party registration, the percentage of race and ethnicity of voters, the percentage of the district that is urban, suburban, and/or rural, the breakdown by generations within the district, and the gender divide within registered voters.  All of the data comes from the North Carolina State Board of Election's voter registration file that was released on March 3, 2018.

If this mid-term election becomes an environment that moves against Republicans, it will most likely be due to increased voter turnout among Democrats with depressed levels of Republican turnout, along with more minority, young, and female voters showing up than in a normal mid-term election. We may also see more urban voters turning out, thus the five categories that will be analyzed in each district.


With the percentages within each state senate district being:

Twenty-one state senate districts hold Republican registration percentages at or above 35 percent, with twenty-nine districts below 35 percent; many political observers have noted that when a district hits 35 percent registered Republicans, the "flip" from Democratic to Republican leaning happens. Six districts are currently held by Republican incumbents but have less than 30 percent registered Republicans that is the GOP's state-wide average (districts 7, 25, 19, 1, 15, and 13, in descending order of GOP registration percentage). These may be key senate districts to watch this fall, if the potential Democratic wave is large enough in the state and Republican enthusiasm is dampened beyond their normal mid-term turnout advantage in the state.


In terms of race and ethnicity within the state senate districts:


With the 69 percent of state's voters being white and non-Hispanic, eight Republican-held senate districts are below that percentage: 12, 25, 11, 10, 15, 7, 19, and 13, in descending order. Four of these districts are also below the mythical 35 percent registered Republican mark, again making them potentially important districts to watch come November with two categories that may be against Republicans in this year's electoral climate.

Looking at the districts through a regional view, namely the percentage of voters living in an urban, suburban, and/or rural county:

With 54 percent of the state's voters living in urban counties, and urban areas having trended more and more Democratic (see this post), eight Republican-held districts have 100 percent of their voters in an urban county: 17, 9, 15, 19, 24, 27, 39, and 41. Another six Republican districts (6, 46, 42, 31, 18, and 7, in descending order) have above the state-wide average of urban voters residing in their districts. Only two Democratic-held districts--3 and 4--have urban voter percentages below 30 percent.

In looking at the age ranges in the districts, I divided the voters into generational cohorts, as defined on the top row:

And by percentages (with an additional column adding the Generation Z + Millennial percentages together):

Much has been made about whether young voters, specifically Millennials and Generation Z voters, will show up in this year's mid-term election. While the two youngest generations constitute a plurality now of North Carolina registered voters, surpassing Baby Boomers, their turnout rates have been substantially below their registration percentages (see this previous post). If you take the 32 percent of the state-wide voter pool of voters under the age of 37, eighteen senate districts have a higher percentage of young voters, with seven of those districts held by Republicans (15, 6, 19, 45, 9, 12, and 41, in descending order). One Democratic-held district, 3, has a little over a quarter of its voters under the age of 37.

Finally, in looking at the upper chamber's districts by gender, we find the following:

In comparing five categories--party registration, white/non-Hispanic, urban, young, and female--that may move against Republicans in this fall's election, three Republican-held senate seats are in four of the five categories that are off the state-averages: districts 7, 15, and 19. Four other Republican-held districts--12, 13, 25, and 41--have three of the five characteristics off from the state-wide averages. As noted by the North Carolina Free Enterprise Foundation's Partisan District Ratings, districts 1, 7, 9, 13, 19, 25, and 41 are considered "competitive": two of these competitive districts (7 and 19) match four of the above categories, with three other districts (13, 25, and 41) being in three of the categories that could be warning signs for the GOP. 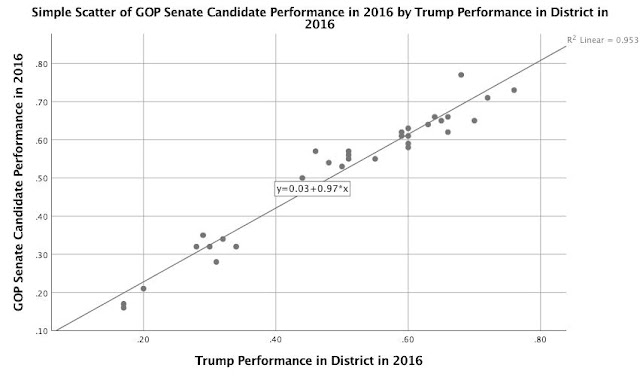 After removing the districts where the GOP candidate did not have any competition (thus received 100 percent of the vote) and the districts where no GOP candidate opposed a Democrat, the relationship between Trump's performance and the GOP state senate candidate's performance is quite striking, with an R-square of 0.953, a strong indication of partisan loyalty from the top of the ballot to the middle of the ballot. Many times, mid-term elections tend to be referendums on the president's party, and it will be important to watch Trump's approval ratings in the state throughout the campaign season leading into November.

The next post will explore the 120 districts of the North Carolina state house, based on the same five categories of voters.