In a previous post, I noted that the dynamics that both Democrats and Republicans were going into with this year's mid-term elections would be based on both demographic, partisan, and regional aspects. This blog post dives deeper into the legislative districts, since the Old North State is experiencing is "once in a blue moon" election cycle with no marquee state-wide race, such as U.S. Senate or governor's contest (a reminder: NC governors are elected in presidential years, unlike many chief executives in the states).

In analyzing the congressional (this post) and state legislative districts (next post), I draw upon the March 3, 2018 data "download" from the NC State Board of Elections of the over 6.8 million active and inactive voters on the rolls. Using this information, I can draw out the various dynamics (party registration, race, age/generation, region, etc.) to analyze and see what trends are evident in the numbers of voters. Of course, these numbers will change/shift between now and November's general election, but this will set a baseline of sorts for future analysis of the voter pool.

First, looking at the state's congressional districts, which look like this (and may still change, thanks to a variety of lawsuits over the districts):

For those not from North Carolina, Republicans hold 10 congressional districts while Democrats hold 3 districts (the 1st, 4th, and 12th, of which the 1st and 12th are generally considered majority-minority districts at this time).

Within the 13 congressional districts, the partisan/party affiliation breaks down as:

Thus, the percentage within each congressional district by partisan registered voter composition is: 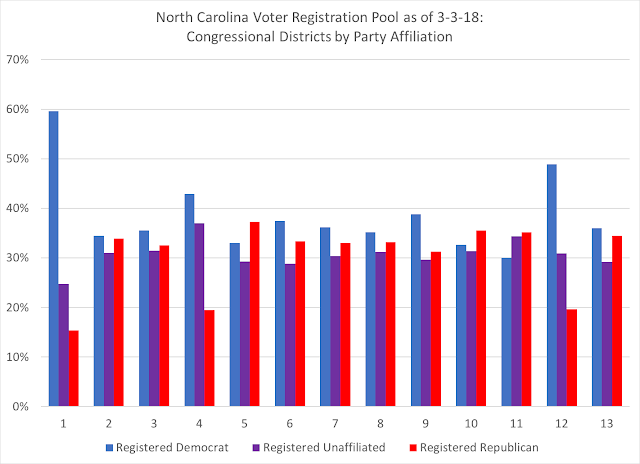 It has been traditional "lore" in North Carolina political circles that once a legislative district hits 35 percent Republican registration, the district tends to flip to the GOP in voting behavior. Currently, three congressional districts are at 35 percent or greater, with seven between 33 and 35 percent, and one (the 9th, out of Mecklenburg down to Cumberland counties), at 31 percent.

In terms of racial and ethnic dynamics within each congressional district:

In terms of percentages within each congressional district based on race and ethnicity: 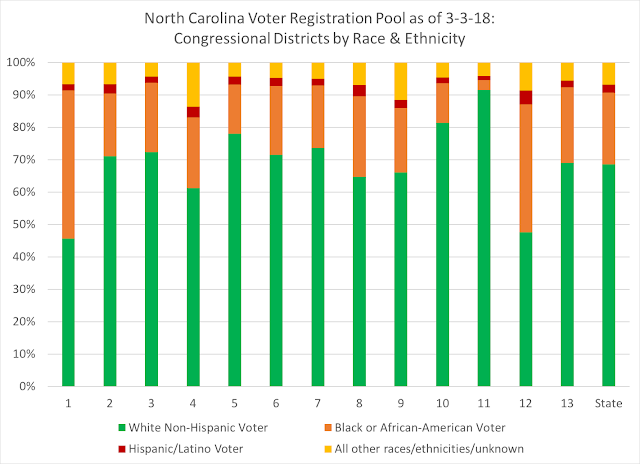 By regionalism (meaning, urban, suburban, and rural county voters, as defined by the U.S. OMB):

And by percentages of regionalism within the congressional district: 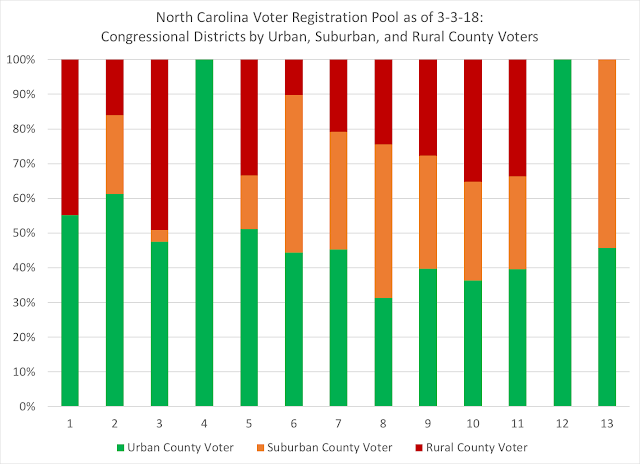 Another analysis is by generations within the congressional districts:

And by percentages for generations within congressional districts: 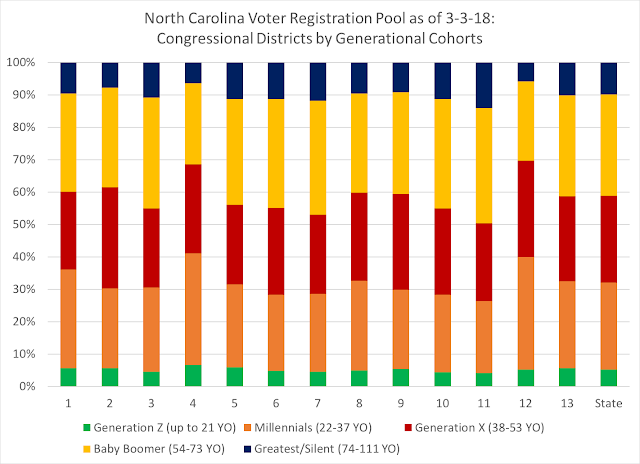 While 32.1 percent of the state's registered voters are under the age of 37 (Millennials and now Generation Z), four districts--the 1st, 4th and 12th (all held by Democrats) and the 13th (held by a Republican freshmen incumbent)--have higher percentages than the state of younger voters.

Finally, much has been made about the 2018 mid-term elections may be another "Year of the Woman," especially among voters. The gender breakdowns by congressional district are: 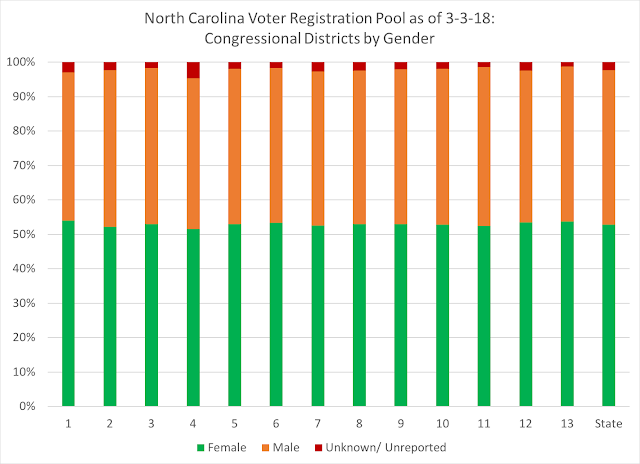 The congressional districts with the highest female percentages of voters are the 1st, 12th, and 13th, all with 54 percent of their registered voters as women. As is nationally the case, women tend to be a higher percentage of voter turnout in North Carolina elections. 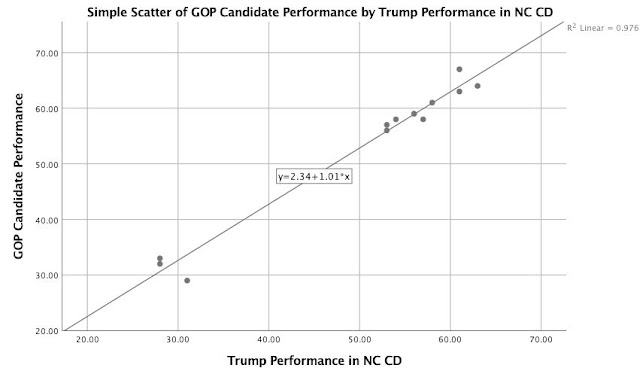 As shown by the line of fit and the R squared value of 0.976, Trump's vote can explain a great deal of the vote for the GOP congressional candidate in 2016. This close connection shows that partisan loyalty is very strong from the top of the ballot down to the congressional level, and if Trump's performance or approval is depressed in the state, the impact may be important to watch in North Carolina for Republican congressional candidates (some further thoughts on that can be found in this post).

With Larry Sabato's Center for Politics recently changing (as of March 8) two NC congressional districts--the 9th and 13th--from "Likely Republican" to "Lean Republican" classification, it will be critical to watch the ultimate turnouts in the various districts to see how November may play out, especially among key demographic groups.

I'll be doing a similar analysis (probably without charts, due to 170 seats) of the North Carolina General Assembly districts, both state house and state senate, and will be posting those numbers in the next article. Thanks for reading.
By OldNorthStatePolitics.com - March 09, 2018