So, what patterns are we seeing this thus far in North Carolina? As Michael Bitzer explained last week, we plan to give a relatively brief rundown on the mail and early vote in NC mid week through the end of early voting period.

For those who like their election-induced dopamine hits quicker, I encourage you to ignore the better angels of your nature and check Twitter. For North Carolina, Michael Bitzer, Gerry Cohen Andy Jackson and I post daily updates. For updates from multiple states, check Michael McDonald and John Couvillon.

Why Look at Mail Voting Data?

These data are important because they are our first look at actual voting behavior in the 2022 General Election. I spend a lot of time thinking about how we can run better elections and how elections can give us a better sense of the will of the people. These can data help us do that in real time.

These data are not, however, useful in predicting the outcome of the election. If that's your goal, I encourage you to close this tab, and instead practice belomancy, myomancy, tyromancy, or any other equally helpful way to predict the future. 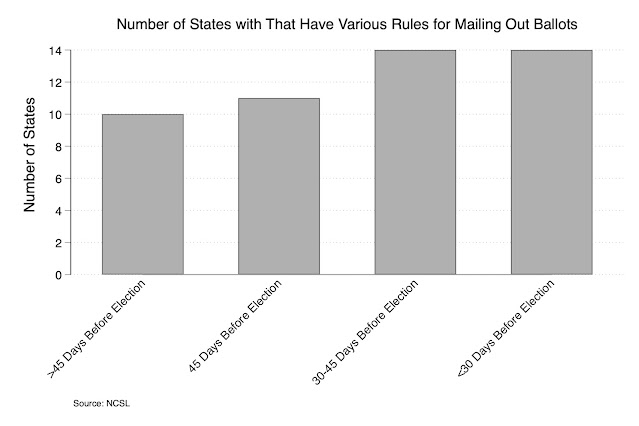 It's also worth noting that the data reported below (and next week, and the week after...) are not ballots accepted, but rather ballots accepted and processed. That may seems like a small point, but is highlights the critical fact that election administrators are doing this week. In a small county, for example, it could be that the person in charge of this processing is out for a day, or is delayed because their kid got strep throat. For that reason, expect to see some adjustments every day.

Last point of context: these ballots are *accepted* but not *counted* in North Carolina. We know who cast a vote and many of their demographic characteristics. We do not know who they voted for. No one does. We'll have to wait until election deadline (see what I did there?) to find out whether these votes were cast for one party or the other.

Raw Numbers
Thanks to the pandemic and unusually high voter turnout, 2020 witnessed a record number of mail votes, whether measured by raw numbers, or as a percentage of the total votes cast.  In 2022, most observers (including Michael Bitzer and me) expect to see mail ballot totals that pale in comparison to 2020. At the same time, we expect that the way you cast a vote, like exercise or putting out decorative gourds in the Fall is habit-forming. Some people who cast a mail vote for the first time in 2020 likely found that they preferred it. So--we expect to see mail balloting in 2022 fall above 2018 and below 2020.
Thus far, that's exactly what has happened. As of this morning 11,412 North Carolinians have cast a vote by mail and had that vote accepted and processed. That's more than 12 times the number that were accepted on the same day in 2018, but about 18 times fewer than were accepted on the same day in 2020. The figure below shows those numbers by day. 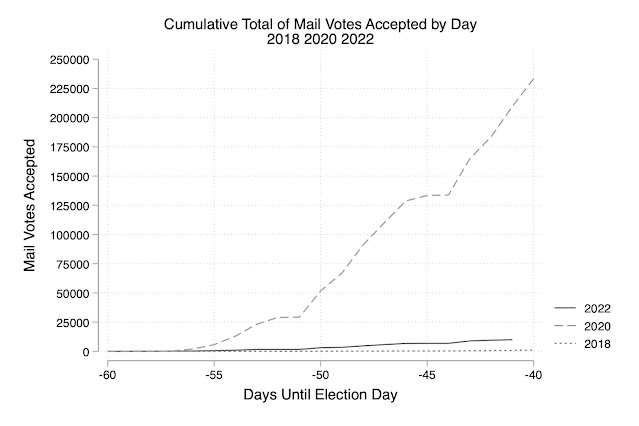 Who's Voting?
We are used to talking about political polarization in who people vote for. In recent years, polarization has come to how people cast their vote as well. As I wrote just after the 2020 election,

Early signs suggest that this polarization remains in mail voting in 2022. Through September 28, 2022, 53% of the votes cast by mail in North Carolina have been by registered Democrats, 15% by registered Republicans, and 31% by registered Unaffiliateds. In 2020, 46% of mail voters were registered Democrats, 34% registered Unaffiliateds and 20% registered Republicans. In 2018 throughout the entire mail voting period, 43% of ballots cast by mail were from Democrats, 26% from Republicans and 31% from Unaffiliated.
After the Dobbs decision, many commentators have been curious whether we would see a massive increase in female turnout. At this very early stage (refer to caveats above), it doesn't seem that female enthusiasm has translated to mail voting (at least not yet). Through September 28, 52% of votes cast have been by females, 43% by males and 6% by people who chose not to identify with a gender. The 2020 numbers were similar with 54% of mail votes cast by women and 39% by men. In 2018, throughout the entire voting period, 57% of votes cast by mail were from women and 40% by men.
In terms of race, 18% of mail voters thus far identify as African American, 68% identify as White. In 2020, 18% of mail voters were Black or African American and 65% identified as White. In 2018, 17% of mail voters were African American and 73% were White.
Not surprisingly, the mail voting electorate thus far tends towards the latter half of the life-cycle. The average age of voters thus far is 62. In 2020 the average age was 54 and in 2018, the average age of all mail voters was 55
Wrapping Up
Thus far, we do not see any substantive and unanticipated changes in mail voting in North Carolina. In terms of turnout, 2022 falls somewhere in between 2020 and 2018, albeit closer to 2018. In terms of demographics, we don't see any massive shifts, but rather the continuation of patterns that have been present for the last few election cycles.
Want to know more? Fear not. Next week Michael Bitzer will be back with more analysis and an update and I'll be back the following week. As more ballots are accepted and processed, I plan to expand the analysis a bit.
----
Chris Cooper is Madison Distinguished Professor of Political Science and Public Affairs at Western Carolina University. He tweets at @chriscooperwcu
By Chris Cooper - September 29, 2022