North Carolina Has Votes (by mail, at least)

North Carolina can claim another first, and that is the first state in the nation with ballots sent out and being returned and accepted for votes for this November 8th's general election.

As my colleagues Chris Cooper and Gerry Cohen (among others) are prone to do, we will cover the returns of absentee by mail (and beginning on Thursday, October 20th, the submissions of absentee onestop, or early in-person ballots) and looking at the trends and patterns emerging so far in the run-up to November 8.

Chris and I plan to post a weekly update here at the blog, usually on Wednesdays, but we'll also have analysis on our respective Twitter feeds, if you need your "data hit" on a daily basis rather than just weekly.

Now, a serious statement of caution: do not read into these numbers anything other than "these are who are showing up" to cast ballots. Trying to predict which candidate may/may not be ahead (the horse-race aspect to our elections) may be as futile as predicting the success of the Hail Mary App State-Troy game finale.

As political scientists who study North Carolina politics and especially voter and elections data, we can tell you the 'fool's errand' of thinking mail-in votes will give us any indication of the final tally: in 2020, the mail-in votes went 70 percent for Joe Biden, who lost the state ultimately by 1.3 percent.

Also, it will be a challenge to figure out what percentage of the final ballots cast will come from absentee by mail voting, along with the percentages for absentee onestop (early, in-person) and on Election Day. Historically, North Carolina voters have been moving more and more to "early" voting, either by mail or in-person. In 2018's mid-term election, three percent of the votes came by mail, with 53 percent coming in-person and 44 percent coming on Election Day. With 2020's COVID, the general election saw a dramatic shift in delivery of ballots: 18 percent came by mail (that equated to 1 million ballots), while 65 percent came in the early voting period, leaving only 16 percent of voters using Election Day to cast their ballots.

One key area of interest for myself (and likely for Chris) will be the voters who voted in-person (either early or on Election Day) in 2018 and who switched to voting by mail in 2020: what do they do this year? Again, the dynamics of the final results will tell us a lot, but we can start to see whether voters who tried a new vote method continue that pattern, or revert back to their old way of voting.

Of those returned, 3.6 percent, or 3,323 ballots, have been accepted for November's general election, meaning these voters have 'banked their ballots' and are done with the general campaign and election. 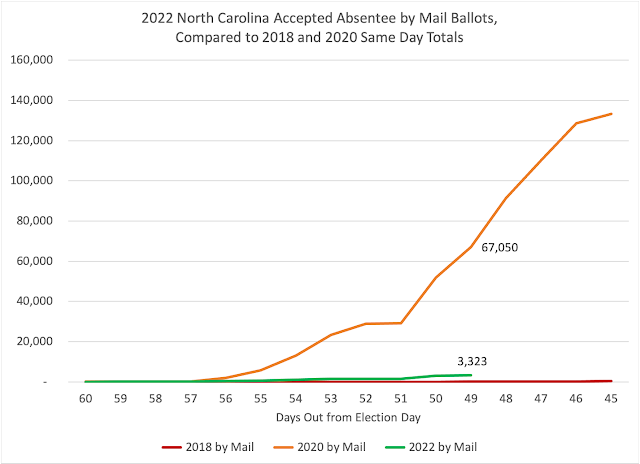 In comparison to the past two election cycles, 2022 is substantially above 2018's point in time (only 91 ballots had been submitted at the same point in time (days) out from Election Day), but well below 2022 (over 67,000 ballots returned and accepted).

In other ways, we can also analyze the votes coming based on voter demographic characteristics, especially this year in terms of gender and generational dynamics.

In looking at gender, female voters are carrying the majority of early mail-in ballots, and are slightly more Democratic than the state-wide total so far. 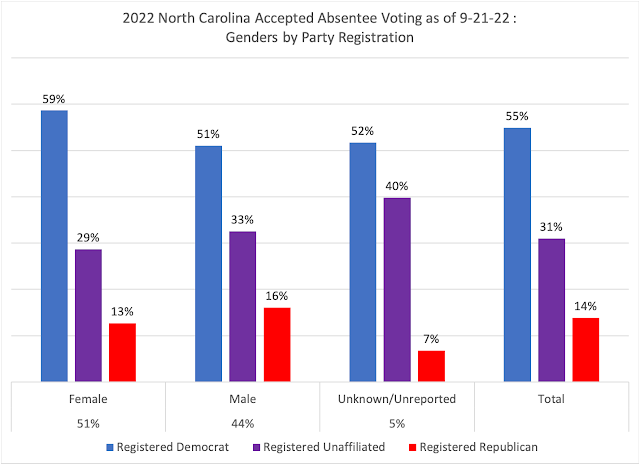 In looking at age, the distribution of mail-in votes so far is skewed in the way we would expect, to older voters. A histogram distribution of voter age shows that the mean age as 60 years old. 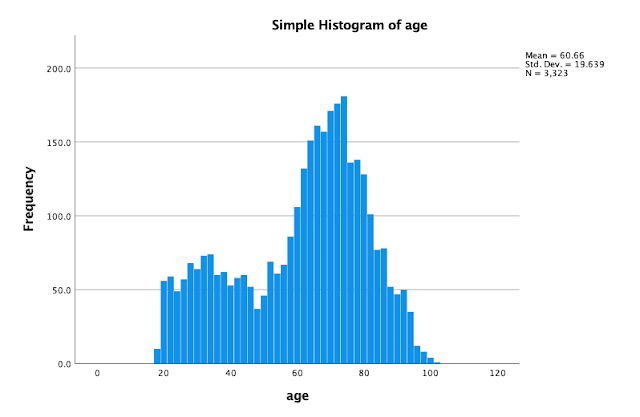 What is interesting in the above distribution the increased frequency of voters in the 20 to 40 age range (that would be Generation Z and Millennial voters), the dip in 40 to 60 (generally Generation X), and the the expected bell-curve distribution from 60 to 95 (Boomers and Greatest/Silent generations).

In terms of actual generation cohorts (as defined by Pew Research Center), we see the party distributions among each cohort early on reflect the general pattern of voter registration, especially among unaffiliated voters. 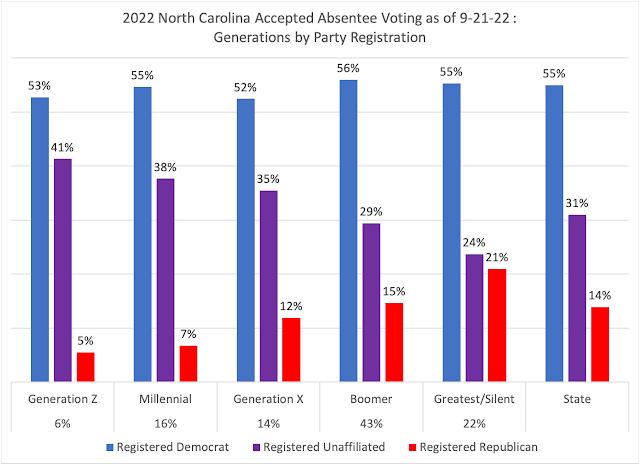 Again, the likelihood is that we will see a significant bulk of all generations cast their ballots via early in-person (known as absentee onestop), so not much to read into these trend lines so far. 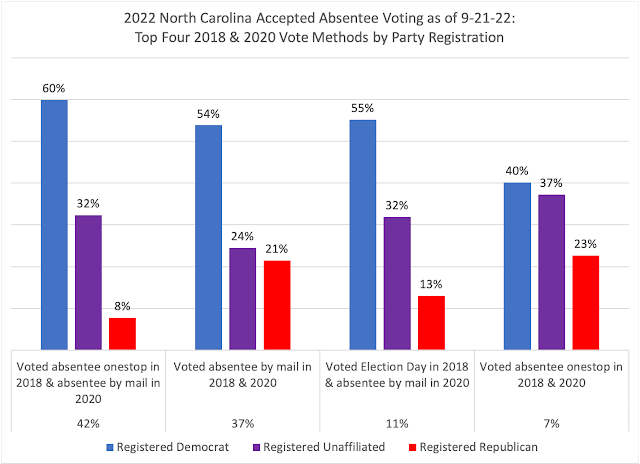 Generally what we tend to know is that voters can be 'creatures of habit,' and that they may find a voting method of convenience and then stick with that method. This year's mid-term election will be an important test of whether voters who switched to mail-in voting will continue, or revert back to perhaps their previous vote methods.

The take-away for me at this early point in the ballot game: we're seeing a substantial uptick in returned ballots from the last mid-term election, which means there is some interest and engagement amongst these early voters. But will trend hold over the next several weeks? Stay tuned.