Two recent polls about the US Senate race in North Carolina raised the eyebrows of many political observers in the state and around the nation. The June East Carolina University Poll had Democratic challenger Cal Cunningham tied with Republican incumbent Thom Tillis (41-41). Public Policy Polling (PPP) released their June poll results that had Cunningham up eight points over Tillis (47-39).

This race, expected to be very competitive by national forecasting organizations such as the Cook Political Report, appears to be a toss-up, according to the ECU Poll, but less so in the PPP Poll.

The discrepancy in these results is not unique to these two polling organizations. Results about North Carolinians preference for president in April showed equally dissimilar results from the Civitas Poll and my own Meredith Poll.

These differing results do not mean there is anything wrong with the methodologies used by the polling organizations. It reflects a more fundamental fact about public opinion that early polls—those conducted months before Election Day—are going to have results that differ, often wildly. The reality is that the surveys administered closer to Election Day are going to be more consistent with each other and show more stability in public opinion.

Poll results from 2016's race between Hillary Clinton and Donald Trump illustrate how results from different polling organizations becomes more stable and less diverse over time. By the time that North Carolina polling organizations administered their October 2016 surveys, all showed a very competitive presidential race and one in which the outcome—Trump’s victory in NC—was within most poll’s respective margins of error. 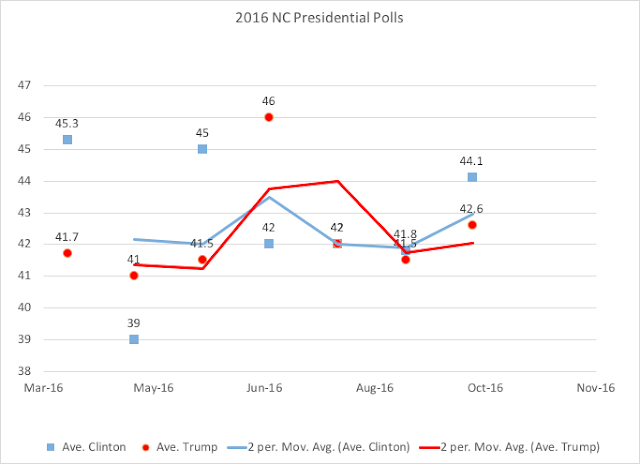 In a similar fashion, 2016 polls about the gubernatorial race between Pat McCrory and Roy Cooper mirrored the presidential ones. Early polls, particularly the April polls, showed differing results. By the October administration periods, poll results were much more consistent from the different organizations and all showed a very tight race—a race Roy Cooper won by just over 10,000 votes. 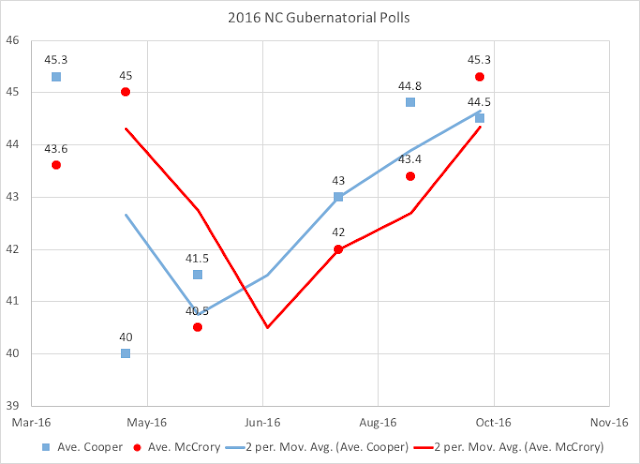 Just as with 2016 polls, we should expect to see that the results from fall 2020 polls show a similar pattern of becoming more consistent. That does not mean, however, that there will not be differences in the results reported by the different organizations.

North Carolina is fortunate to have six polling organizations that regularly survey its citizens on political and social matters. Four are associated with academic institutions—East Carolina University, Elon University, High Point University, and Meredith College—while one is affiliated with a policy organization—the Civitas Institute—and another is a private organization—Public Policy Polling.

These data collection techniques, as well as their different sampling methodologies, produce diverse results. The 2016 election cycle demonstrates these differences. Four polling organizations reported results from their October survey administrations (the Meredith Poll did not administer a survey in October 2016 and the East Carolina University Poll began in 2019). There were notable differences in their results.

Among the polling organizations listed above, the Civitas Poll was the one whose results were closest to the final tally of the Clinton-Trump matchup with their sample being the only one of the four to show Trump leading. Public Policy Polling’s results were outside their reported margin of error (+/-3.3%).

However, in examining the results from the same polling organizations for the October survey about the 2016 governor’s race, the Elon Poll and that from Public Policy Polling had results showing Roy Cooper ahead. The Civitas Poll results from October, however, had Pat McCrory ahead.

The point is that no single poll most accurately reflects the public opinion of North Carolinians. All of the polling organizations do good work, but citizens, journalists, or pundits should rely on the polling averages of the organizations listed above.

Organizations such as Real Clear Politics and Five Thirty Eight operate this way and incorporate North Carolina polls into their work. These organizations are primarily concerned with presidential and US Senate elections, rather than the range of questions that the six polling organizations regularly ask North Carolinians.

To help citizens and others better understand these dynamics, Old North State Politics will soon feature the North Carolina Polling Average, featuring an average of the results reported by the six organizations on common topics: presidential and gubernatorial approval, satisfaction with the direction of the nation and state, election preferences, and opinion on major policy issues.

Dr. David McLennan is a professor of political science at Meredith College, where he founded and directs the Meredith Poll.

McLennan teaches American Government, Campaigns and Elections, Political Leadership, Women in Politics and other courses at Meredith, with research interests focused on the impact of negative advertising on political attitudes, image restoration for politicians in trouble, polling methodology, and barriers to women’s electoral success.