The makeup of a state’s electorate can change in a few ways. The first is what is euphemistically known as “generational replacement”—people enter the electorate when they come of age and they exit the electorate when they shuffle off their mortal coil. People can also register at any point after they reach 18—large-scale registration can spur small pockets of registration and affect the shape of the electorate. Voters can also from one state to another—influencing the electorate in the state they leave and that they move to. A small, but important number of registered voters also have their voting rights temporarily suspended after committing a felony.

In North Carolina, people can register as members of the Democratic, Republican, Libertarian, Green, or Constitution Parties. Or, they can avoid all of these party affiliations and instead register as “Unaffiliated.” As the graph below demonstrates, and as Michael Bitzer illustrated in his snapshot of North Carolina voters on this blog, North Carolinians are choosing the Unaffiliated option with greater and greater frequency. 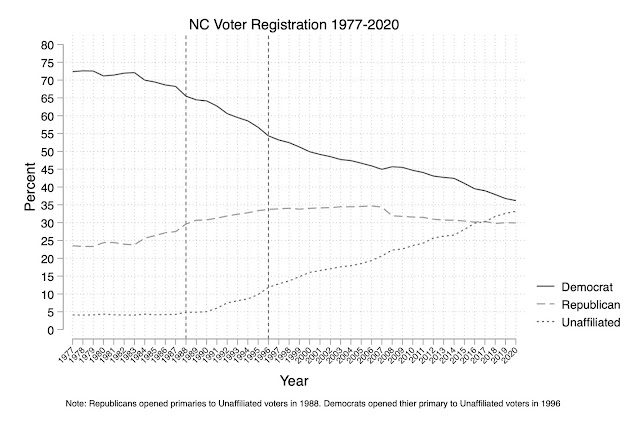 And, while it is well-documented that younger people are choosing the Unaffiliated option in greater numbers (again—see Bitzer’s recentsnapshot, also reflected in the graph below), there is less evidence about how party switching has contributed to the rise of Unaffiliated voters in North Carolina. 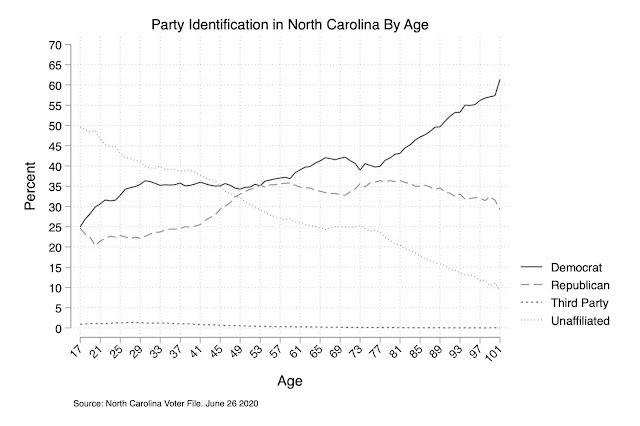 The Mouse That Roared

The graph below uses data from the North Carolina State Board of Elections to examine the frequency of party switching in North Carolina from 2000 to 2019. The solid line shows the actual numbers from each year and the dashed line averages those numbers so the trend is easier to see. 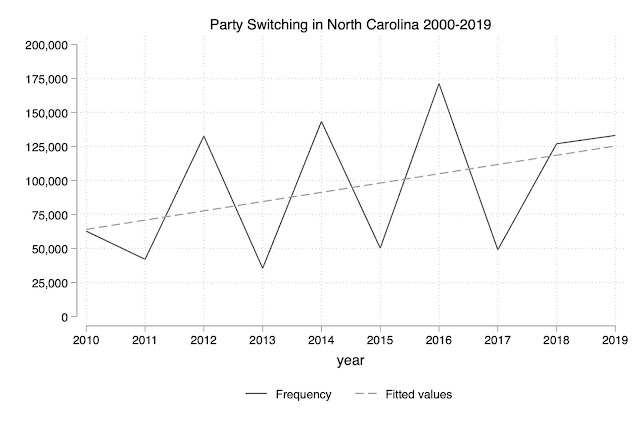 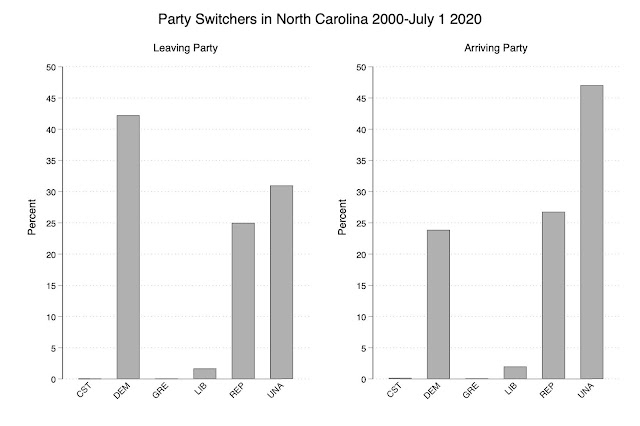 The graph below translates the trends highlighted above into slightly different form—by calculating the net registrants gained and lost by each party through party switching (number of registrants gained-number of registrants lost). Here, it is clear that Democrats have been the biggest loser in terms of party switching, while Republicans have improved their lot slightly and the Unaffiliated designation has, of course, gained a good bit of ground.  The pattern of Democratic loss is not surprising as Democrats are the largest group of registered voters in the state (and therefore have the most to lose). 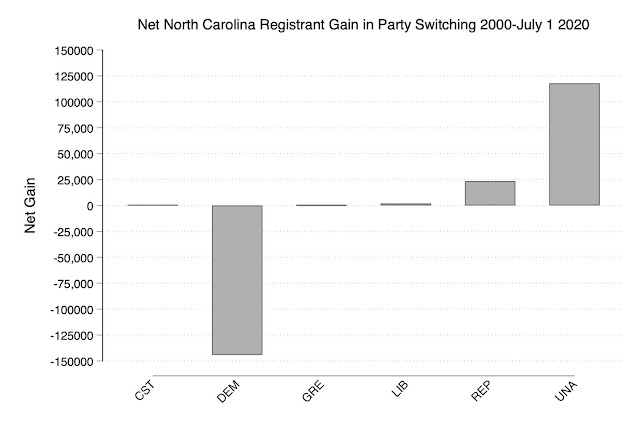 What Does This All Mean?

Most of the analysis we tend to see about voter registration in North Carolina (or any state, for that matter) focuses on a snapshot of time and is agnostic as to how various people became Democratic, Republican, or Unaffiliated registrants. By peeling back the curtain a bit and examining party-switchers, we can learn more about the patterns of individual voters. And, here we see that although party-switchers don’t create the primary tides of partisan change in North Carolina, a million examples of party switching is nothing to ignore.

Further, the evidence provided here suggests that party switching is on the rise and will only become more important in the coming years. Finally, these data demonstrate that party switching is one way that Democratic Party has been losing voters. If the Democrats wish to maintain their hold on the plurality of North Carolina voters, they need to concentrate not just on recruiting new voters, but on convincing existing voters to stay.

In the analysis above I was careful to refer to switches rather than switchers. This wasn’t a keyboard hiccup, but rather a conscious choice as many who switch parties do it more than once. In the most extreme example, one North Carolina voter switched his party affiliation 88 times (44 times to Democrat and 44 times to Republican) between 2010 and July 1, 2020!

Dr. Chris Cooper is the Madison Distinguished Professor of Political Science and Public Affairs at Western Carolina University. He tweets at @chriscooperwcu.