Two weeks ago, I posted an article about the estimated number of absentee by mail (ABM) ballot requests submitted by North Carolina registered voters, based on a July 7th report from the NC State Board of Elections and information from various county boards of elections. At that point, the estimated requests stood at 69,500.

Following that, the State Board began a daily report of the requests, found here, that not only gives the status of requests by counties, but also various demographic factors, such as voter race, gender, ethnicity, and age ranges. In the past week since the report has been posted and updated daily, the numbers of ABM requests have grown considerably, and this piece will see where things stand now as we are under a hundred days away from the general election, and more importantly, only forty days from when the ABM ballots will sent out to voters.

As of Monday, July 27, the estimated total requests for NC absentee by mail ballots stands at 92,370, up from the initial estimated number that was posted of 69,500, an increase of thirty-three percent over the past two weeks. Based on projections that I'll discuss shortly, we could easily see North Carolina reach an estimated 100,000 requests within the next week, most likely by Monday, August 3rd.

Why "estimated" still? Right now, we have 91 out of the 100 counties in the state reporting numbers. A few more counties had previously reported numbers, but they are not accounted for in this daily generated report, so we may be operating on out-dated figures at this point. Granted, the 91 counties giving numbers represent over 95 percent of the 2016's requested ABM ballots, with the few counties not having reported at all accounting for a small percentage ultimately. It will be nice to have all 100 counties reporting actual numbers, but we'll take what we can get at this point for analysis purposes.

In addition, some of the counties may still be processing and accounting for ballot requests that have come in, so the expectation is that over the next week or so, the numbers may 'smooth' out in terms of the numbers posted each day. Then again, more and more North Carolinians may request the ballots; more on that aspect later.

So What Do We Know About the Voters Requesting ABMs?


According to today's report, several different factors can be examined regarding the 92K requests so far. For the most part, the types of voters asking for the ballots are generally within the traditional patterns regarding ABM ballots; but there are two factors that are quite striking in terms of where the ballots are coming from that bear watching.

First, a comparison of what we are seeing each day against what we saw on the same day out from the general election in 2016. As a reminder, 2016 had a little over 233K requests for mail-in absentee ballots, and on this day in the request process, there were a total of a little over 18,660 requests submitted.

This year, the requests hit the same number in mid-May, and haven't looked back. In fact, the steep since mid-June is quite remarkable. 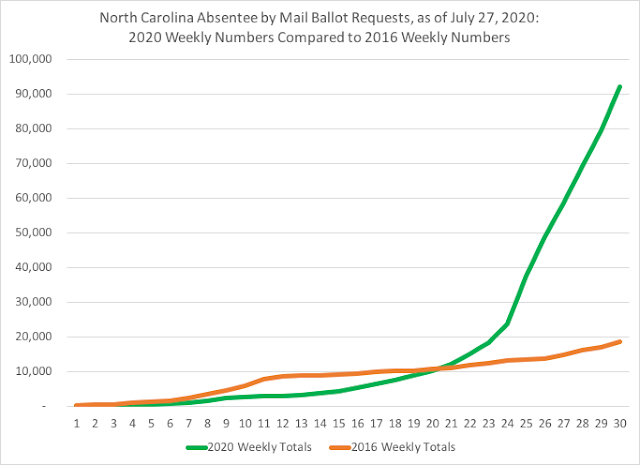 Today's total represents a nearly 5 times increase over where NC stood just four years ago. Yes, five times the number of ABM ballot requests are already in, compared to the exact same day four years and its total then.


Within today's report of ABM requests, we can also count the numbers of voters by party registration, and this shows a significant shift as well against historic trends of absentee by mail voting patterns. 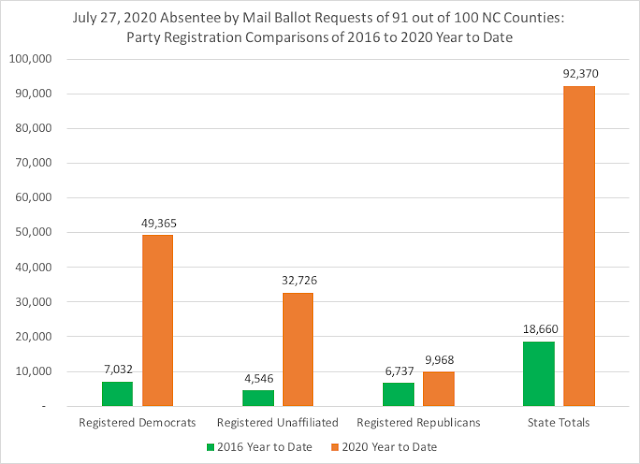 Registered Republicans are up a little under 1.5 times ahead of where they were four years ago this same day, while registered Democrats are up 7 times, with registered Unaffiliated voters up 7.2 times.

This is a notable shift from what we saw just four years, particularly in terms of the percentages among these groups within the requests. 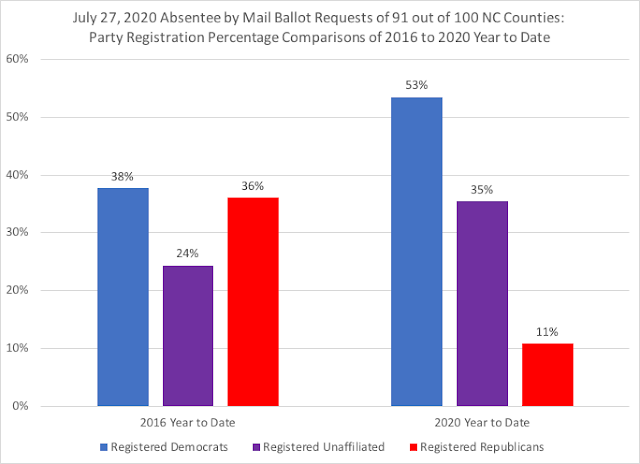 This imbalance among party registration can be hypothesized by a number of explanations, such as:


There's really no way to know for certain what is driving these numbers, unless pollsters running their surveys ask voters "have you requested your ballot, and why?" After the mail-in ballots are sent out to voters and the ballots are returned and accepted, another data file will be available on those who have cast ballots. We'll have a better number of those types of ballots, and more importantly, will be able to match voter history data (such as, what vote method did voters use in the past compared to this vote method) to make some more educated guesses.


Among voter race, white voters are the predominate group requesting ballots, and reflects a typical trend in North Carolina absentee by mail voting. 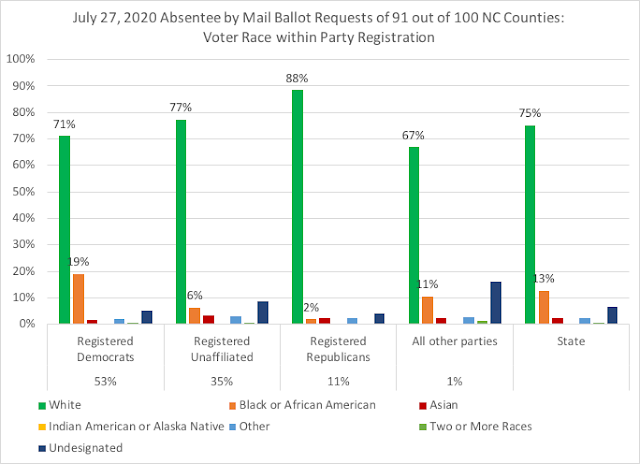 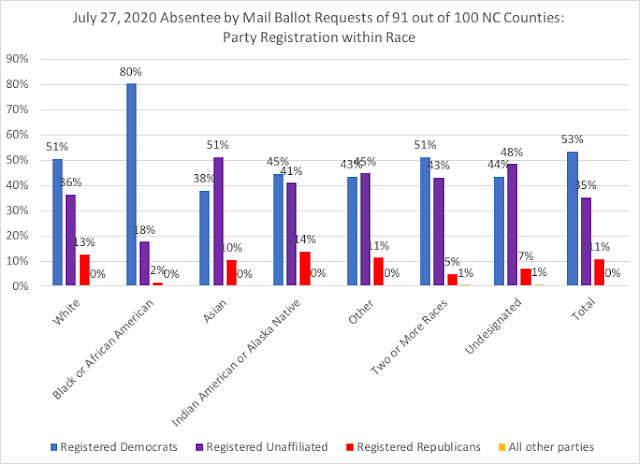 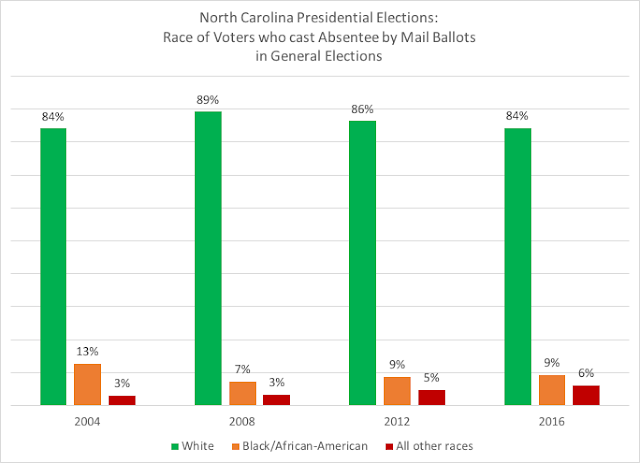 In the past four presidential election years, white voters generally have been around 85 percent of the absentee by mail ballots cast, though this year's requests of 75 percent white so far is down from that historic average of ABM ballots cast.


The State Board of Elections created age ranges within the report, and they don't quite align with generational cohorts. For example, the 18-25 range covers the first Generation Z voters along with the tail end of Millennials (those currently 24 to 39 years old), while the 26-40 pretty much covers the bulk of the Millennial generation. Those 41 to 65 are both Generation X (40 to 55 years old) and the end of the Boomer generation (56 to 75 years old), while the 66 and older are both Boomers and Silent generations. 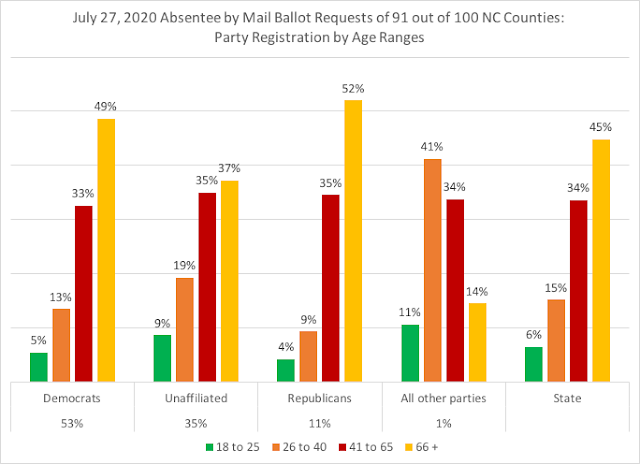 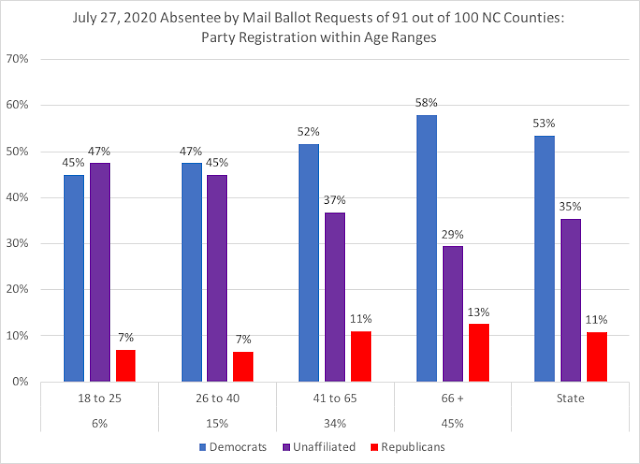 Within the purely Millennial range of 26-40, registered Democrats and Unaffiliated voters are 92 percent of the ballot requests so far, with registered Republicans at 7 percent, below the state's Republican share of 11 percent. Along with the 18-25 YO range, which sees an exact flip between the percentages of registered Democrats and Unaffiliated voters, this is an intriguing trend to watch carefully moving forward.

In regards to the registered voters within the 41-65 and 66+ age ranges, older North Carolina voters tend to be more partisan registered and not unaffiliated, unlike younger cohorts who have been driving the state's unaffiliated registration status.


Among voter gender, the fact that women are 56 percent of the requests so far, when typically they are 52 percent of all the ballots cast, seems to show a possible early enthusiasm and interest by women in this year's general election. And we know that from polling and campaign strategy, the gender gap may be a significant divide in this year's voting behavior, among many other 'divides' in our nation's politics and voter choices. 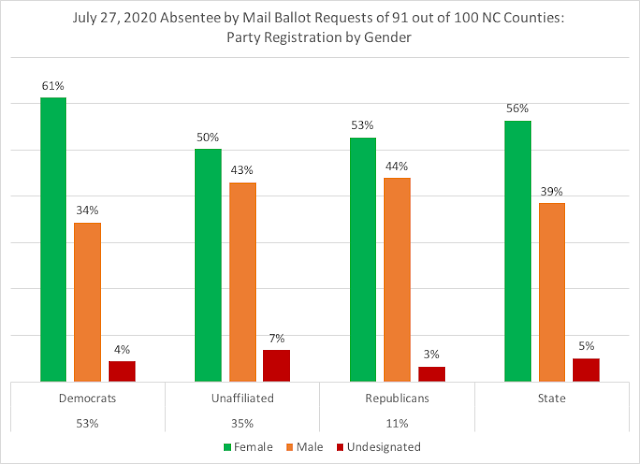 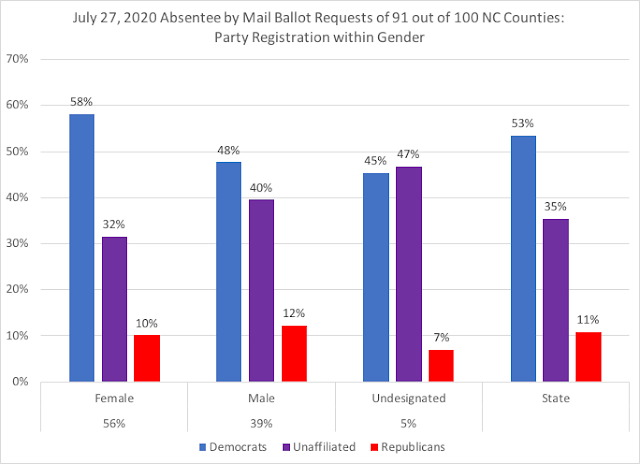 All three regions are up in their numbers, but there's significant differences from just four years ago. Urban counties are 73 percent of the total ballot requests, with suburban counties accounting for two out of every ten requests, and rural counties are 8 percent. 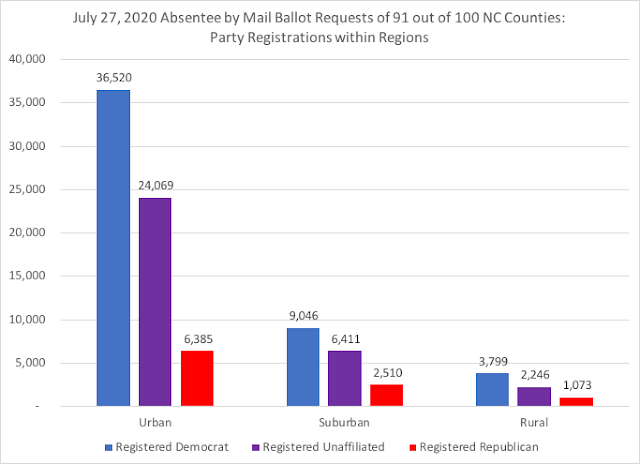 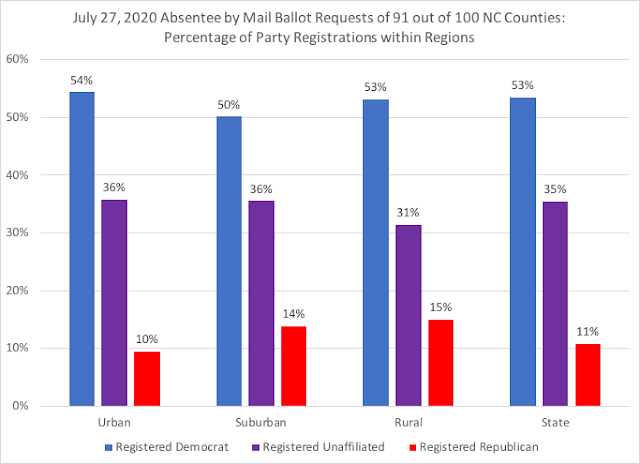 In comparison to 2016 at this same time, urban counties were 67 percent, while suburban and rural counties were nearly tied, at 17 and 19 percent respectively. 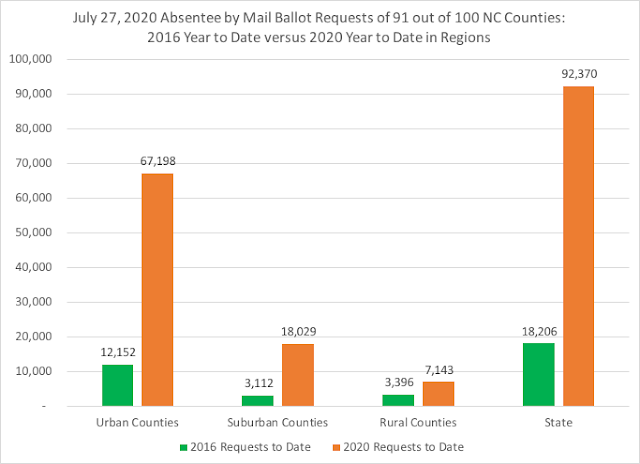 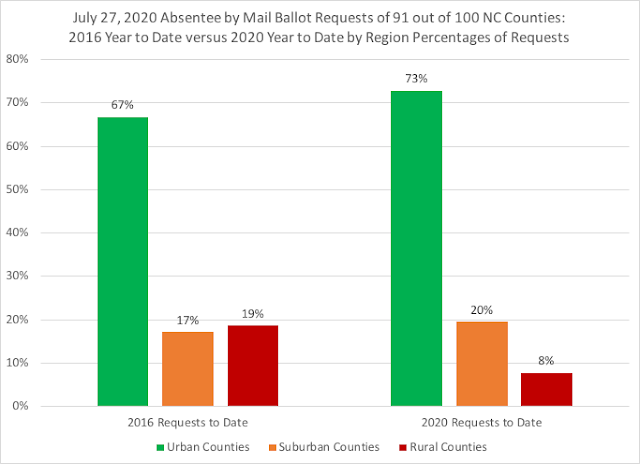 However, so far, urban counties the dominate region in 2020, while rural counties are behind in their percentage of the overall requests.


What To Look For This Coming Week

I'll be continuing to post some of the above analysis for the coming days at the blog's Twitter account @oldnorthstpol, but a couple of things that I'll be looking for:

--------------------
Dr. Michael Bitzer holds the Leonard Chair of Political Science at Catawba College, where he is a professor of politics and history; he tweets at @bowtiepolitics.
By OldNorthStatePolitics.com - July 27, 2020