It's Official: 7 Million Registered Voters in the Old North State

Well, to be exact: 7,005,862 registered active and inactive voters, according to the NCSBE as of September 8, 2018. While not much has changed among the various statistics that I generally follow and report on, I'll go ahead and repeat some and give some further observations as we enter the home stretch of the mid-term campaign season. 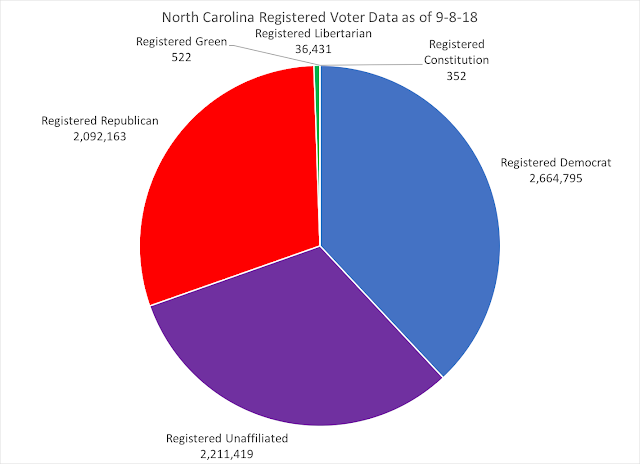 Registered Democrats are 38 percent, while registered unaffiliated voters are 31.6 and registered Republicans are 29.9 percent; the other parties--Libertarian, Green, and Constitution--are less than one-half of one percent of the total pool of registered voters.

Racially, the electorate continues to diversify: 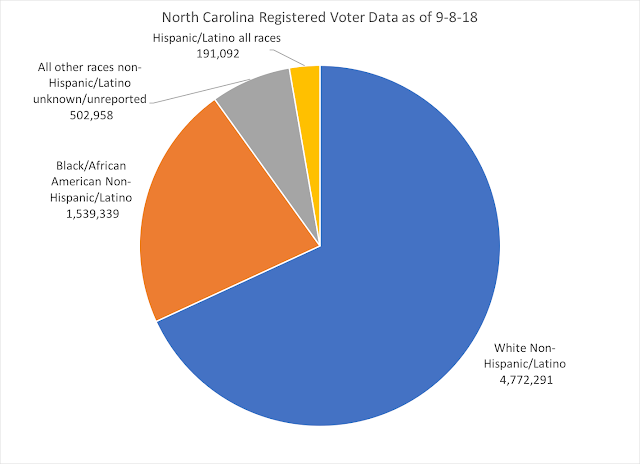 Generationally, the voter pool has a plurality of voters under the age of 37, composed of Millennials (those between the ages of 22 and 37) and Generation Z (21 years old or younger). 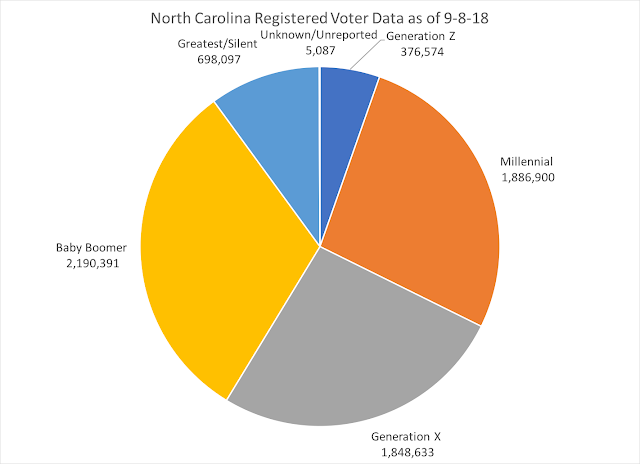 In breaking down the party registrations by race/ethnicity and generational cohorts, the dynamics continue as they have for some time; first, by race and ethnicity: 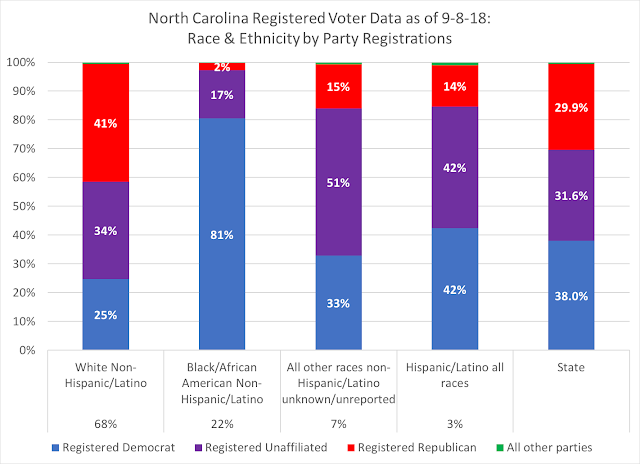 Among the generational cohorts: 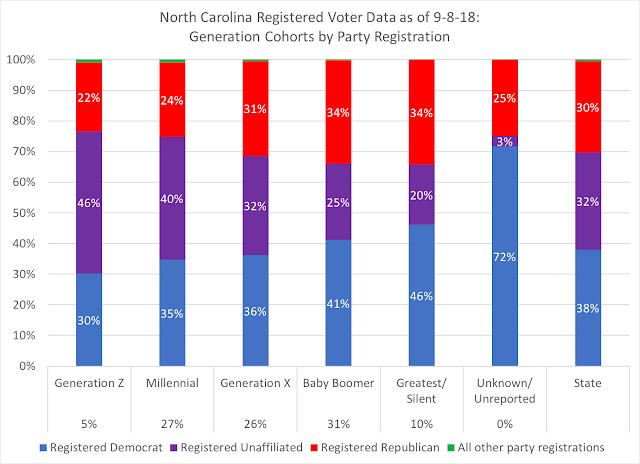 The growing purple band in the middle of all the cohorts, especially among younger voters, is the reason for the overall rise of registered unaffiliated state-wide. But as registration for the Democratic Party drops to now 30 percent among Generation Z voters, the decline for the Republican Party--to 22 percent of Gen Z voters--is something that has been occurring for some time.

Flipping the numbers, one can see the racial and generational composition of the two major party registrations and unaffiliated voters: 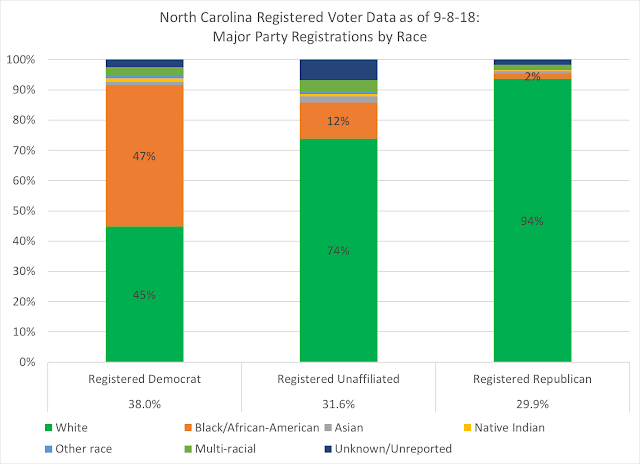 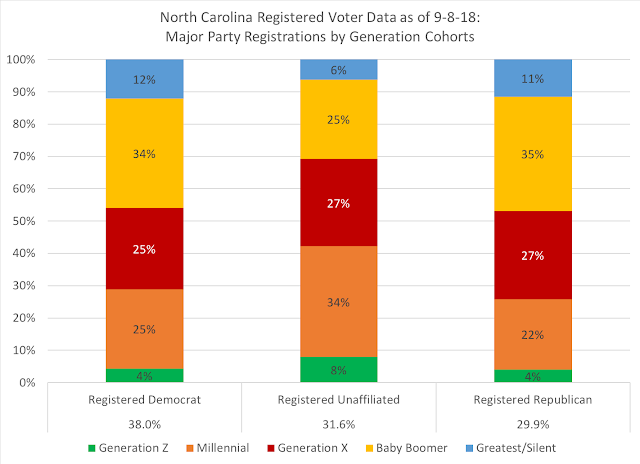 If registered unaffiliated voters were a "party," they would claim a decidedly younger voter population (42 percent of unaffiliateds are under the age of 37), while Democrats are 29 percent Millennials and Generation Z, to 26 percent for the Republicans.  Racially, the Democratic Party is a majority-minority party, while Republicans are overwhelmingly white.

In looking at the 'regional' dynamics of the voter pool, well over half of the 7 million registered voters live in an urban county, as defined by OMB. 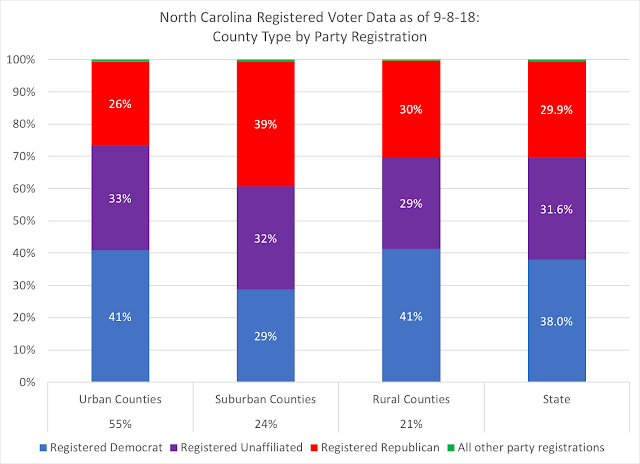 Within those urban counties, registered Republicans are barely a quarter of the voters in these counties, while they make up the plurality (39 percent) in surrounding suburban counties. Rural counties show the closest similarity to the state average.

But if you break out the 'central city' within an urban county from the surrounding suburban areas within that urban county, one sees a distinctive difference among the suburbs: 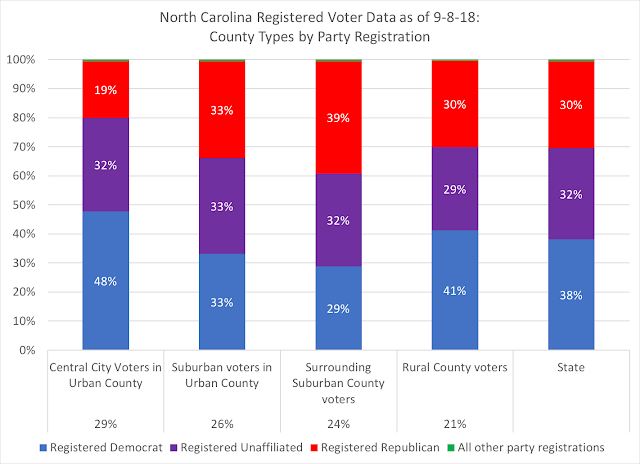 Within the central cities (like Charlotte, Raleigh, Asheville, Winston-Salem, and Greensboro, for example), nearly half (48 percent) of the registered voters align with the Democratic Party, while less than one in five urban voters are registered Republicans. Within the suburban areas of the urban counties, the division is neatly into thirds among the three top registrations.

And in looking at each party registration and their regional composition: 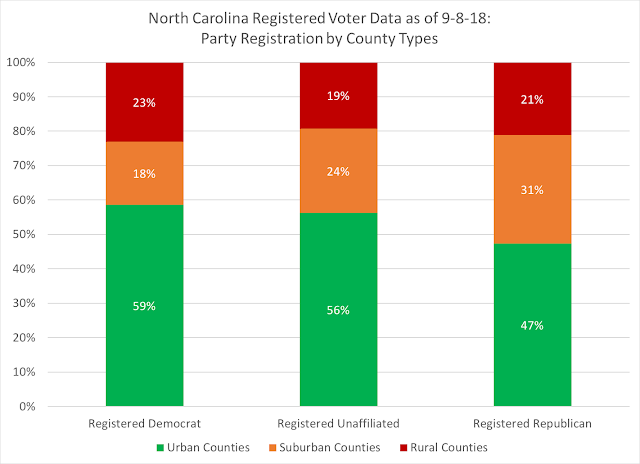 So, with a voter pool of 7 million, what might we expect as a potential turnout for this year's blue-moon election cycle? The past two "blue-moon" elections were in 1994 and 2006: 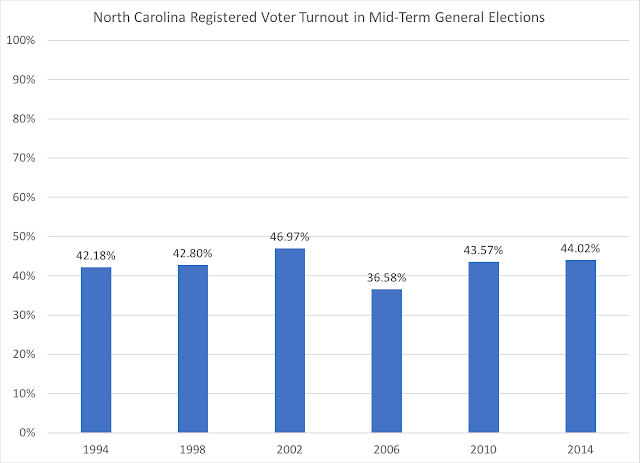 But a key difference will be: which party has a better turnout? Traditionally, registered Republicans have held the advantage in turnout among their registered voters in mid-terms, with the exception of the Democratic wave year of 2006: 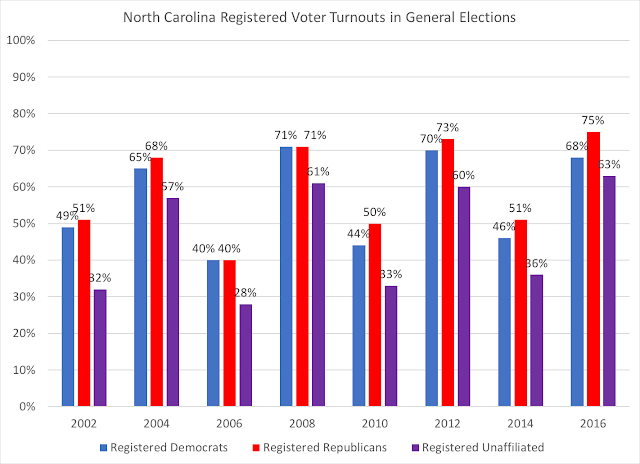 If this is a true Democratic wave year for the U.S. House of Representatives (but maybe not in the U.S. Senate), and all signs (in my estimation), point to it, then a comparable year would be 2006's turnout rate, which saw both parties tie in their turnout rate. But in a Republican wave year, like 2010, half of all registered Republicans turned up to cast a ballot, with a six point advantage over registered Democrat's turnout rate.

With the first ballots going out and being returned, some indication of Democratic enthusiasm, or traditional Republican superiority, may be evident in early voting in the Old North State. But much like the tease that has been Hurricane Florence, a lot of bobbing and weaving may lead some of us guessing at the forecast for November.
By OldNorthStatePolitics.com - September 13, 2018