With the previous posts on congressional and state senate districts, I looked at the voters within each district and utilized five categories to classify: percentage of party registration, racial and ethnicity, regionalism, generations, and gender. This post wraps up the series with a deep dive into the North Carolina State House districts, all 120. Needless to say, with that many districts, I'll be putting the numbers and the percentage tables at the end of the piece, with analysis to follow. The analysis is only based on the demographic numbers and percentages; candidate quality (incumbent, challenger, etc.) is not taken into account.

The current map, as has been challenged through several lawsuits, shows the following district lines, with Republicans controlling 76 seats out of the 120 in the chamber:


Using the mythical "35 percent" rule when it comes to Republican registration within a district, 53 districts have at least 35 percent Republicans, with only one of those districts--40--currently held by a Democrat. Of the fifty-one districts where registered Republicans are below their state-wide average of 30 percent, ten are held by Republicans: 51, 2, 25, 119, 49, 92, 1, 8, 46, and 61. If Democrats can swing a significant portion of these districts come November, it will aid them in seeking to break the super-majority control of the lower chamber.


Of the fifteen counties that have a female voter registration percentage of 55 percent or greater, four of those counties have Republican representatives: 61, 8, 25, and 52.


Of the five categories where Republicans have worse numbers than the state-wide average in each category, two districts--8 and 61--match in all of these areas. One other Republican-held district, 25, has four matching categories, and two Republican districts--14 and 51--are in three categories.

Finally, like with the congressional and state senate districts, I compared the vote percentage performance of Donald Trump compared to the Republican state house candidate in the 2016 election, taking out those districts that did not have a Democratic or Republican challenger. The scatterplot and the "line of fit" is: 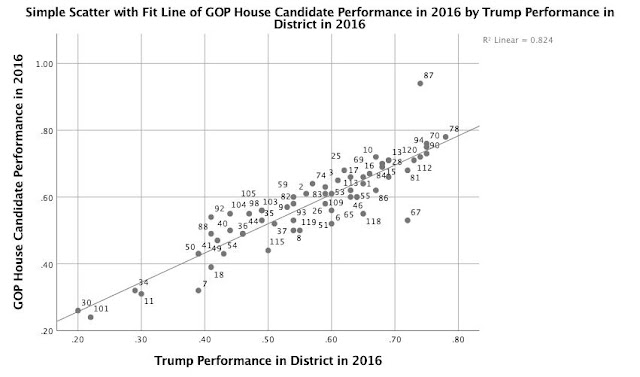 Unlike the state senate, the value of the R-squared is only at 0.824, meaning that Trump's performance in the district would predict only 82 percent of the Republican state house candidate's performance. But still, that shows a significant level of straight-party ticket voting going on in the state.

Again, combining the above data with the NC Free Enterprise Foundation's classifications of competitive NC State House seats, several of the districts are considered "competitive," with several others listed in either lean or strong categories per NCFEF.

One more point to make to wrap up this series: I think, much like another political scientist has observed, the chance that 2018's electorate will look like anything that we have seen in a mid-term election is highly unlikely. While past voter participation and turnout rates can give a general "sense" and some patterns to different types of elections (presidential vs. mid-term, for example), the volatility of this year's political environment seems to point to "anything can happen" (and generally has: see Alabama's special election for U.S. Senate and the closeness of the Virginia House of Delegates elections last year, along with Charlotte's mayoral race). And while past performance of a district "may" show some indication of how a district may run, I am becoming more convinced that this year's elections may be one that nobody can (nor should) predict; instead, look at the baseline numbers within the districts, take into account the different factors that may give clues to the mood of the environment, and then play your cards as they are dealt.

The old adage in political campaigns is, "you can't beat somebody with nobody." And that extends to voters as well: "you can't get somebody to vote if they aren't registered." That should be lesson number one for any political party, candidate, and campaign.

The state house district numbers and percentages for each of the five categories are presented below: