As we enter almost a week of in-person absentee (early) voting in North Carolina, the combination of both in-person and mail-in ballots is getting very close to one million total absentee ballots cast in the Old North State.

First, here are the numbers of both Mail-In and In-Person Ballots by party registration of the voter:

To give some comparison of where North Carolina was four years ago in terms of cumulative absentee ballots: 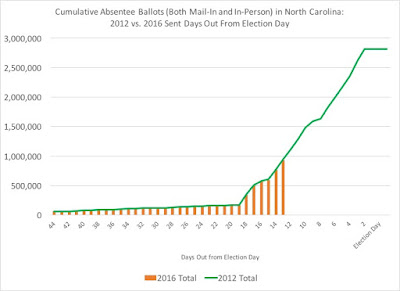 Currently, this year's total is 2 percent behind where we were in 2012 (943,088 total absentee ballots were at this same day four years ago). 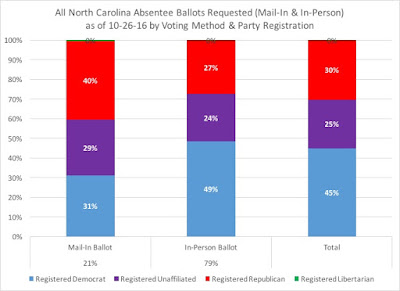 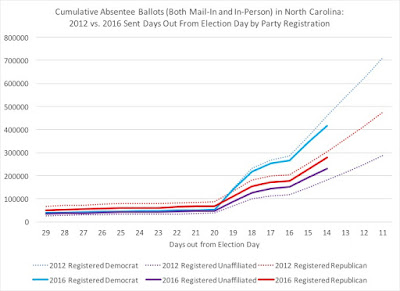 While both registered partisans are running behind (both registered Democrats and registered Republicans are nine percent behind their 2012 same day totals), registered unaffiliated voters are 28 percent ahead of where they were four years ago this same day. 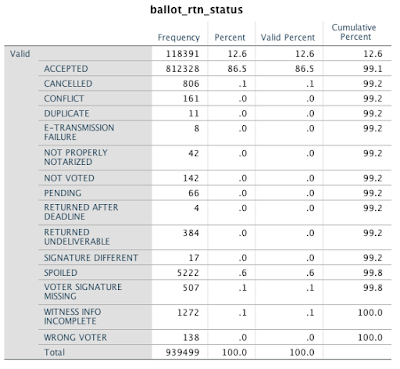 Among the accepted ballots so far:

Of the 812,328 accepted mail-in and in-person ballots, the party registration breaks down as: 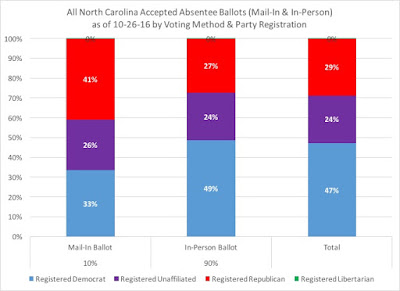 Turning to the in-person absentee ballots, the total number of ballots submitted and evaluated for acceptance:

Of the ballots that have been accepted (733,270), the daily numbers for the period of this form of early voting is: 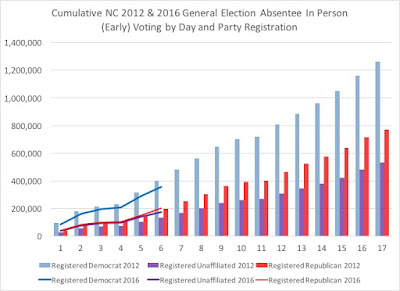 In isolating the first week of in-person absentee ballots: 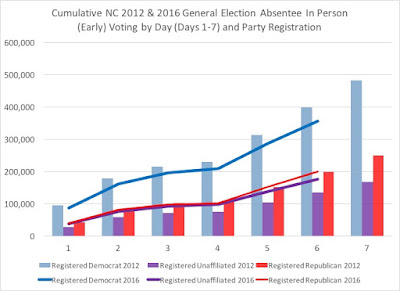 In comparison to the 2012 cumulative totals, this year's in-person absentee ballots are where things stood four years ago (733,269 compared to 2012's same day total of 733,745). In terms of party registration performance, registered Republicans have met their same numbers from four years ago, while registered Democrats are down 11 percent, and registered unaffiliated voters are 30 percent ahead of where they were the same day in 2012. 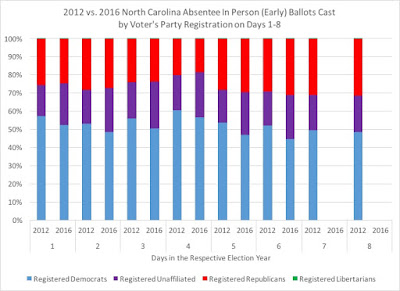 In terms of race within the absentee in-person voting based on party registration: 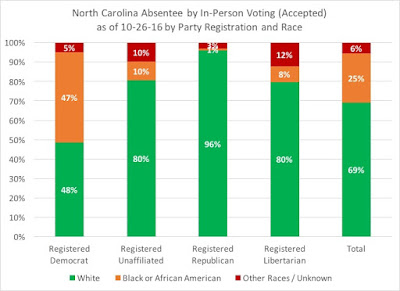 In terms of daily percentages of absentee by in-person ballots by race of the voters: 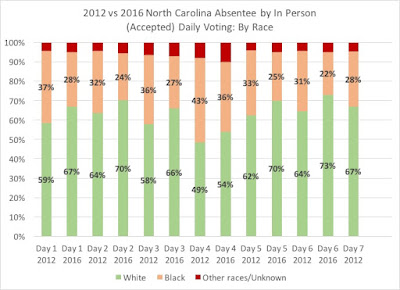 In terms of gender of voters who have cast absentee by in-person ballots, women are still at 56 percent of the ballots, with female registered Democrats being 49 percent of the female ballots: 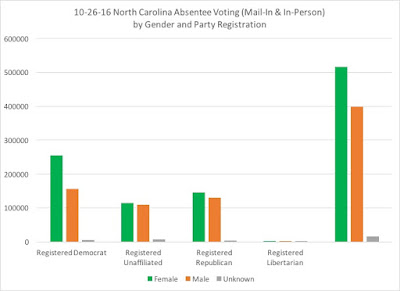 Of the voters who have submitted absentee by in-person, I looked at their registration status (if they were registered in 2012 or afterwards) and, if registered in 2012, did they vote in that general election: 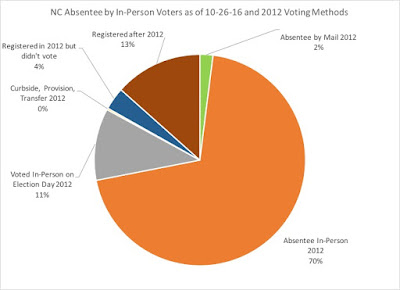 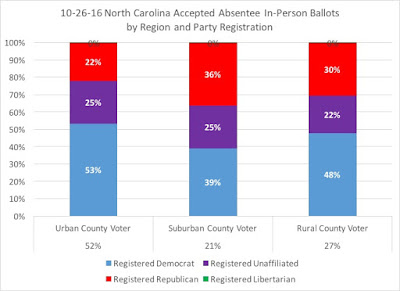 Non-native born voters continue to be a dominate group of the accepted absentee in-person ballots: 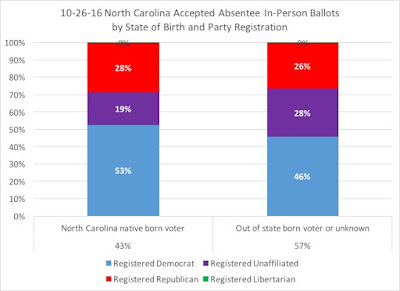 Finally, the generational break-down of accepted absentee in-person ballots continues to show a majority of voters being Baby Boomers and older: 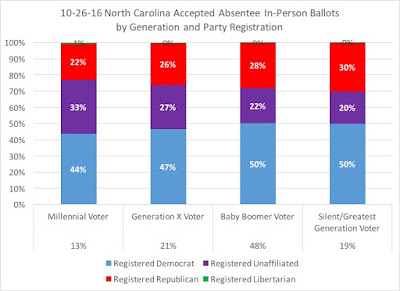 UPDATE: the following graphs look at the mail-in absentee ballots so far in North Carolina. With over 196,000 mail-in ballots and over 79,000 of them returned and accepted, here are the various break-downs by party registration and other information. 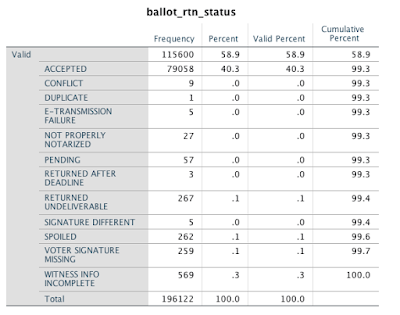 The acceptance rate for overall ballots is currently 40 percent, with registered Republicans at 41 percent, registered Democrats at 43 percent, and registered unaffiliated voters at 36 percent.

Overall, registered Republicans continue to claim a plurality of this method of early voting in North Carolina: 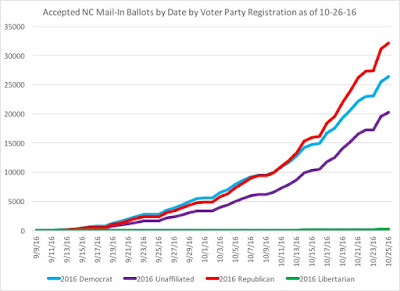 Registered Republicans are 41 percent of mail-in ballots, with registered Democrats at 33 percent and registered unaffiliated voters at 26 percent.

However, in terms of party registration and performance, there is a significant decline in registered Republicans utilizing this voting method in comparison to 2012. 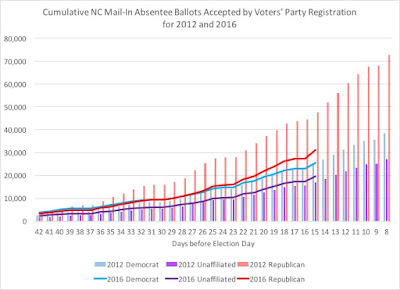 Of the outstanding mail-in ballots yet to be returned: 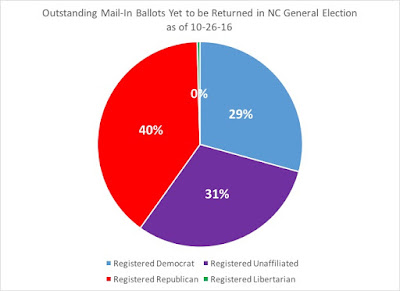 Finally, the 2016 North Carolina voter who is using mail-in absentee ballot and whether they were registered in 2012 and if so, what their voting method was, is: 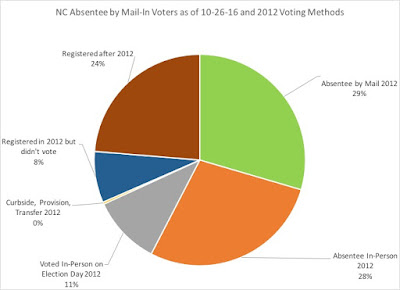