As of September 27, North Carolina absentee mail-in ballots have now reached 69,193~ requests, continuing to outpace the same-day from election day numbers from 2012. 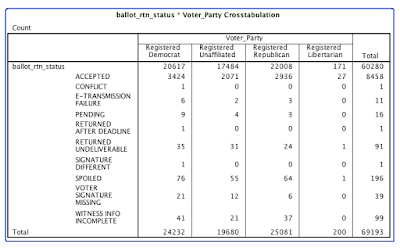 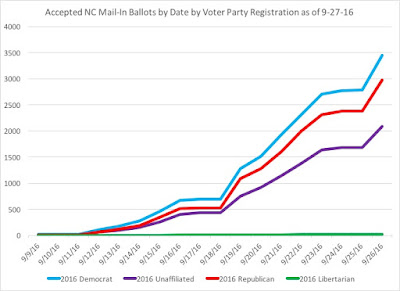 In comparing this year's mail-in accepted ballots to where things stood four years ago (same-day comparison to Election Day in both years), registered Democrats are still over-performing compared to 2012: they are 155 percent of the same day cumulative number from 2012. More interesting, registered unaffiliated voters are at 166 percent of their same-day cumulative numbers from four years ago. Registered Republicans are slightly under-performing their current numbers compared to four years ago, at 97 percent. Total absentee mail-in accepted ballots are 130 percent of where the numbers were in 2012.* 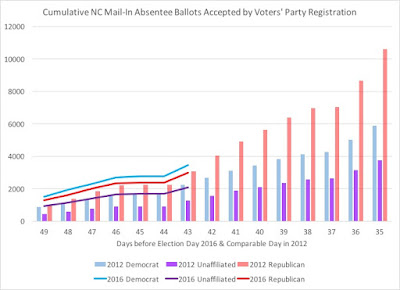 Finally, the outstanding mail-in ballots (that have not been returned) have gone to a slight Republican advantage. 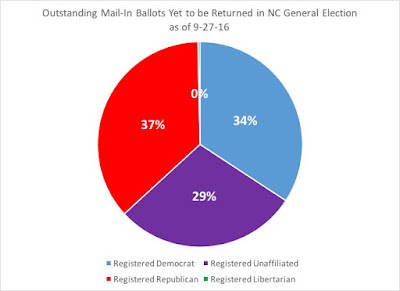 As a final observation, interest seems strong now that we are going into the third full week of mail-in voting in North Carolina. We can't read into vote choices by these, but it is obvious that North Carolina voters are interested in this year's election (from analysis done over the weekend, 30 percent of voters who have cast mail-in ballots did not participate in 2012 or were not registered in 2012).

~ corrected due to duplicate records.
*corrected percentages now include both faxed and e-mailed requests for mail-in ballots from 2012.
By OldNorthStatePolitics.com - September 27, 2016