Now that North Carolina has a few days of In-Person Absentee ballot casting (otherwise commonly known as Early Voting), we can start to do some comparisons with the performance of different groups--registered Democrats, Republicans, and Unaffiliated voters, for example--to their performances in 2008's record-breaking early voting activity.

In the below graphic is the trend line for early voting as a whole, with all ballots cast as In-Person Absentee votes.  In comparison to 2008, the cumulative early votes cast are exceeding those posted four years ago. 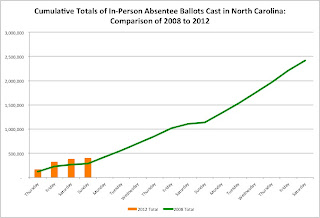 In looking deeper into these ballots cast, though, we can also see some partisan patterns emerging that could give an indication that the Democratic ground-game is back in full operation this year.

In looking at the trend lines for registered Democrats, Republicans and Unaffiliated voters casting ballots, all of them are above their 2008 numbers--with Democrats making considerable totals added to their numbers from four years ago. 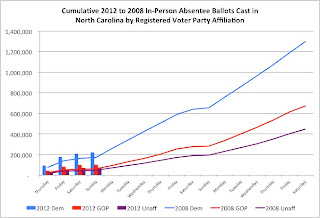 The next three charts detail the three different groups and their progress so far in the first four days of 2012 early voting in comparison to 2008's trend lines. 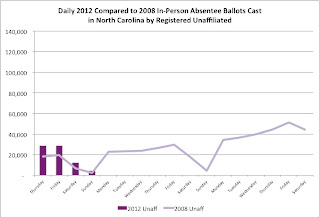 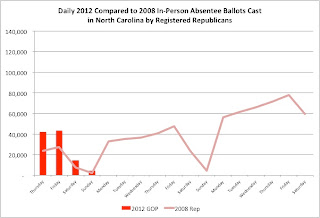 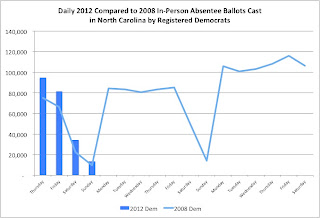 While all three groups of voters are above their 2008 trend lines, Democrats had impressive numbers in the first four days of early voting.

With that being said, a major qualifier must be made at this point: not all North Carolina registered Democrats will vote Democratic.  Granted, we know from exit poll data going back several presidential elections that self-identified partisans will typically vote 90% of the time for their party's candidate, but in the Tar Heel state, it is likely that some registered Democrats--who are older, white, conservative, and rural--are actually Republican voters.

So, while the numbers look good for Democrats, a major caveat has to be warned in reading into how these voters may be selecting their presidential candidate.

One other facet of early voters could be the racial composition. In 2008, black registered voters made up 22% of the entire electorate, but that combines both early voting and Election Day voting. Among early voters, black voters were 29% of all the early votes cast, with white voters being 67% of all the ballots cast in early voting. 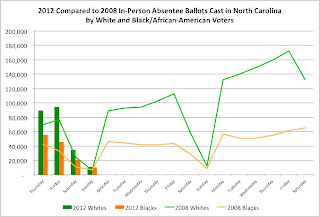 I'll be posting more about the early voters casting ballots over the next two weeks, and will be posting some summaries at the other blog I write for, WFAE's The Party Line.

Just a reminder: in 2008, we had 4.3 million votes cast in the North Carolina presidential election, with 58% of those votes coming before Election Day.  While I'm not sure we will see a repeat of that 4.3 million total votes cast, I may be rethinking that due to the numbers of early votes we are seeing in just the first four days.