With over 216,000 absentee ballots added on Halloween, North Carolina's absentee ballot pool is getting closer to two million ballots, with 95 percent of those having been accepted as votes for the November 8 general election, now a week away (and everyone say AMEN).

The total absentee ballots, by party registration and method of voting, stands at 1,970,525:

This represents a nearly 8 percent increase from the same day in 2012. 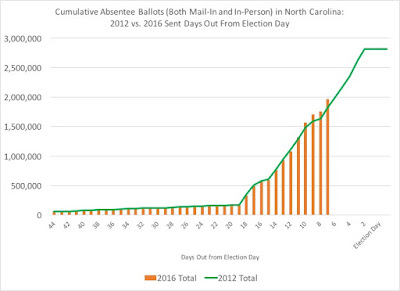 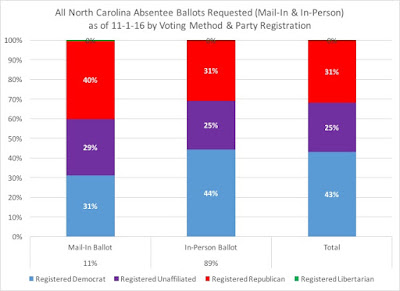 These party percentages have held pretty steady over the past few days. However, in looking at the comparison of party break down to four years ago, the notable differences are still there in this year's absentee ballots: 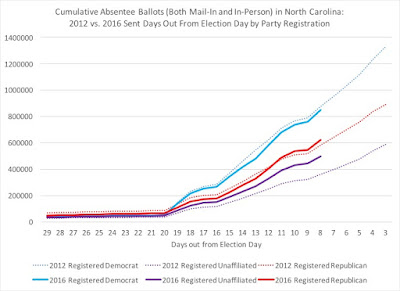 In looking at the racial composition of all absentee ballots so far: 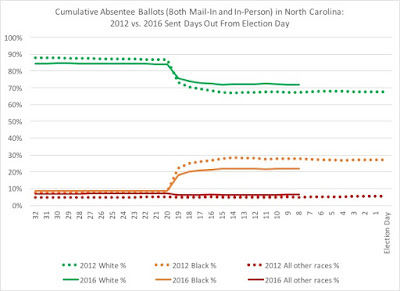 White voters continue at their 72 percent of the absentee ballot pool, with black voters at 22 percent and all other races at 6 percent. While white voters are 15 percent ahead of their same-day totals from 2012, black voters continue to lag their 2012 same-day totals, down 16 percent. What is remarkable is that all other races (Asian, Indian American/Alaska Native, Multi-racial, other races) are ahead of their same-day 2012 totals by 39 percent.

With the interest in female voters, North Carolina's absentee ballot pool continues to be dominated by women, at 57 percent of all the ballots: 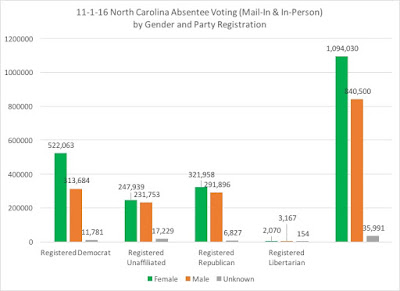 The next key step in this analysis is to look at the return status of the ballots, with a focus on 'accepted' ballots: 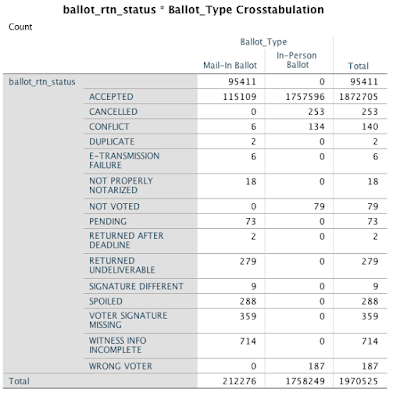 Out of the nearly 2 million absentee ballots, 1,872,705 have been returned and accepted as votes for the general election. Of those, the overwhelming majority are in-person ballots: 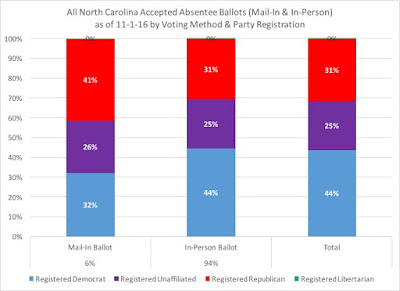 
Compared to four years ago, the accepted absentee in-person ballots are running 11 percent ahead of where we were four years ago on the same day. 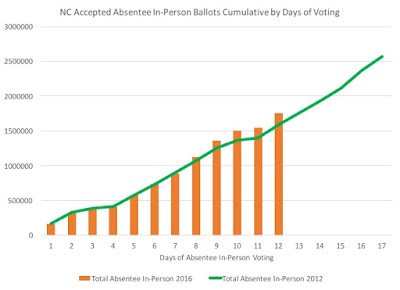 Within the party registration, though, there continues to be some key differences. 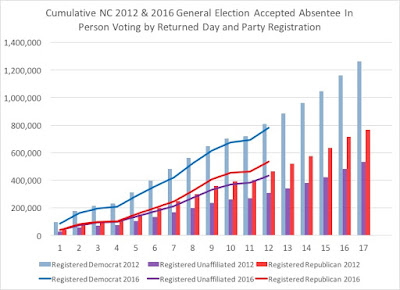 The daily party registration percentages for the last half of in-person balloting is: 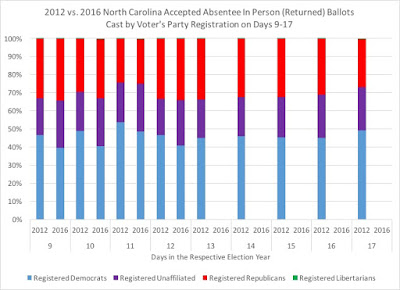 In terms of looking at the accepted in-person ballots' racial composition by party registration: 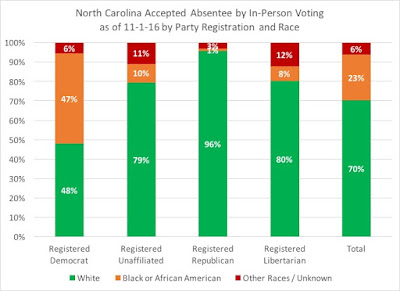 The daily percentages based on race for accepted absentee in-person ballots: 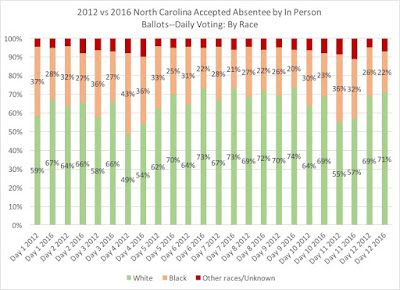 This year's in-person ballot voters are slowly becoming more diversified in their 2012 voting methods and registration, with the growing percentage having registered after 2012 and those who voted in 2012 on Election Day: 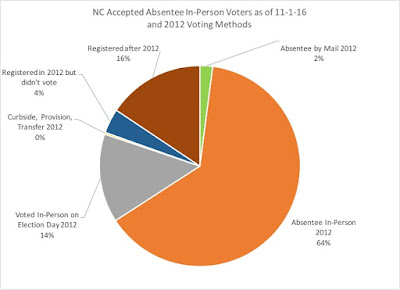 Finally, the three factors that I'm watching are graphed below: region (urban vs. suburban vs. rural county voters, native vs. non-native, and generations by party registration): 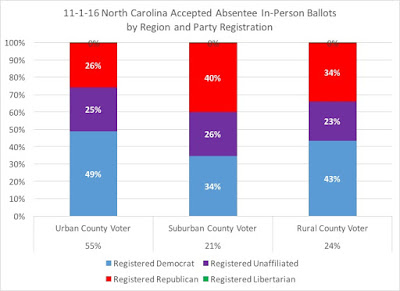 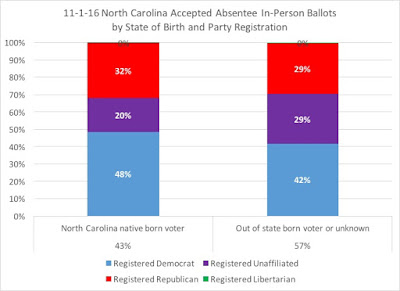 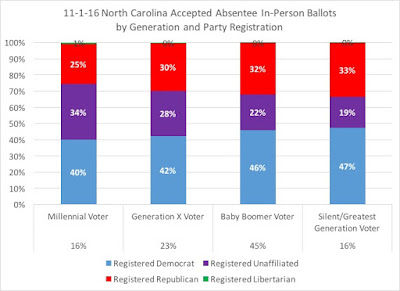 Now, turning to the other vote method of mail-in absentee ballots, this form of early voting is currently running significantly behind 2012's same-day totals (83 percent of where ballots stood four years ago). 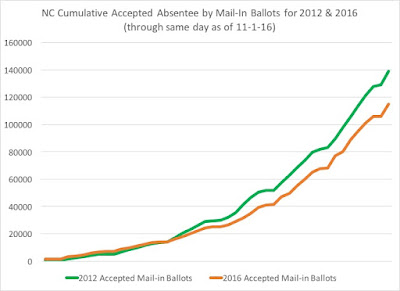 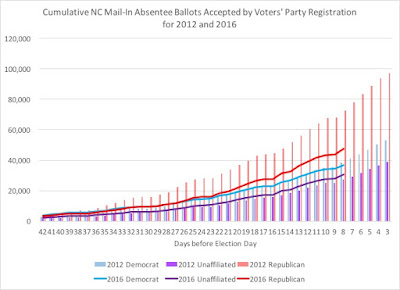 Of course, if registered Republicans can get their outstanding ballots returned, they could start to eat into their deficit. 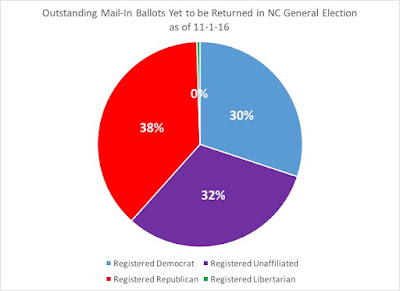 The shift from mail-in ballots to in-person ballots may be one of the big take-aways from this year's election.
By OldNorthStatePolitics.com - November 01, 2016