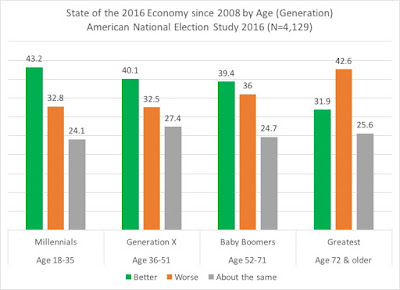 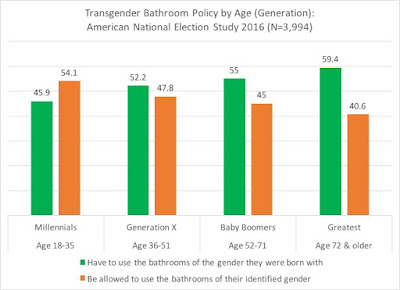 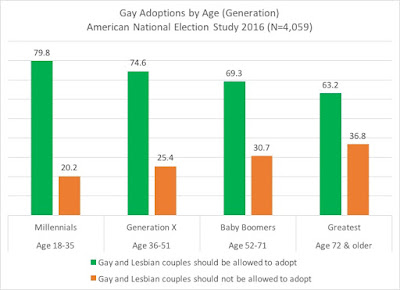 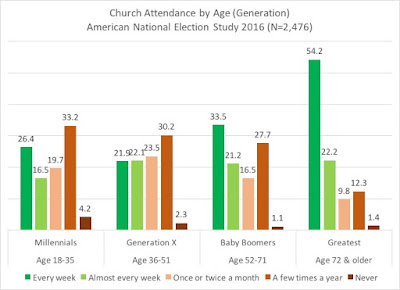 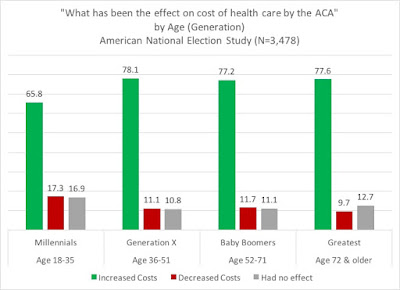 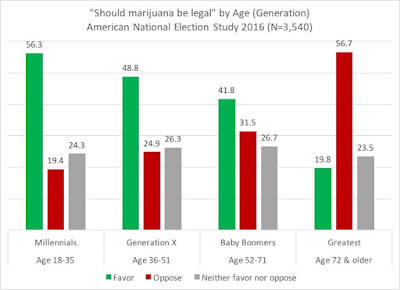 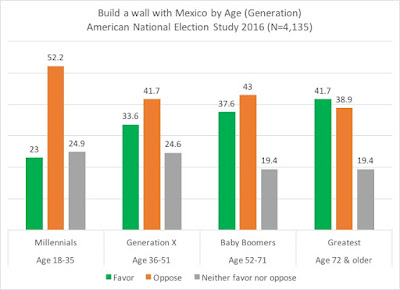 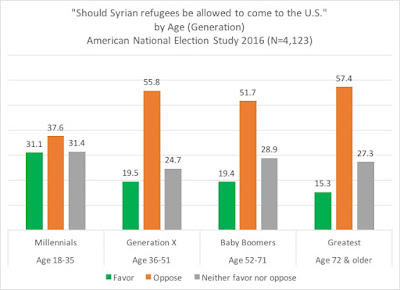 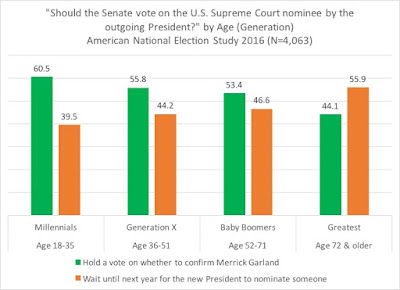 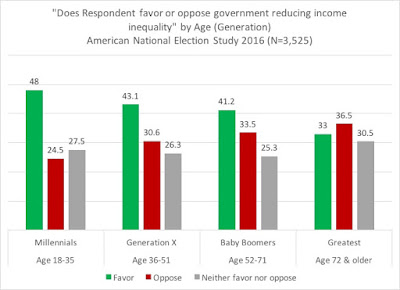 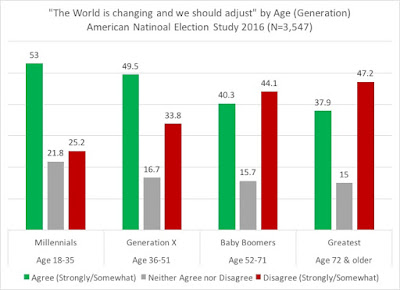 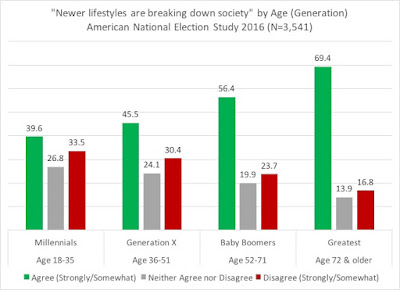 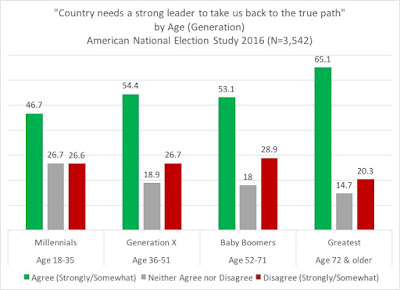 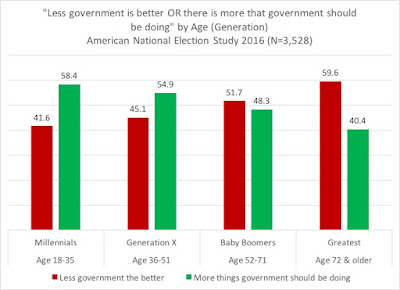 Analysis of Generations in the 2016 Election: Partisanship, Ideology, Vote Choice, and Feelings Toward Clinton & Trump

In exploring more about the "generational shift" occurring in North Carolina politics (particularly from a voter registration and turnout approach--see previous posts on this blog site), I wanted to take a larger view of the differences between Millennials (those born after 1980) and Baby Boomers (those born between 1945 and 1965), with Generation Xers (born between 1965 and 1980) and the Greatest Generation (born before 1945).

One invaluable data resource to explore these differences is the 2016 American National Election Study, a massive survey of over 4,000 individuals who are contacted both before and after a presidential election. This survey asks a battery of questions, not just on politics but a variety of policy questions and a range of issues.

For those who would like to use the 2016 ANES data, the folks at UC-Berkeley have developed a website that allows users to put in various questions (by first finding the variable) from the survey and run cross-tabs to analyze the survey pool (it's a little tricky at first, but once you get the hang of it, you can spend a great deal of time running numbers).

For example, if you wanted to "recode" the "age" question of the respondents into generations (in 2016, Millennials were 18-35; Generation Xers were 36-51; Baby Boomers were 52-71; and Greatest Generation members were 72-90), you would find that the 2016 pool ("electorate") broke down into the following generational cohorts: 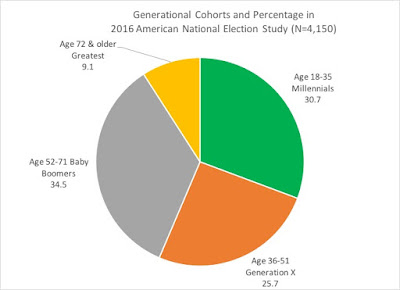 Using this division of the 2016 ANES data, I began to run cross-tabs of the data by different characteristics and policy questions asked in the survey. For example, what was the party self-identification by the generations? 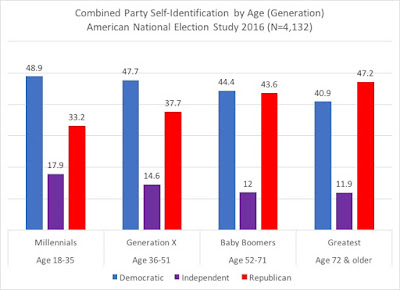 Democrats (those who identify as strong, not strong, and leaners combined) are a plurality of both Millennials and Gen Xers, while Baby Boomers have a nearly even divide between the two political parties. Members of the Greatest Generation have a plurality of Republican self-identification. Barely a third of Millennials self-identify with the GOP, while nearly 18 percent of the youngest generation don't identify with either political party. 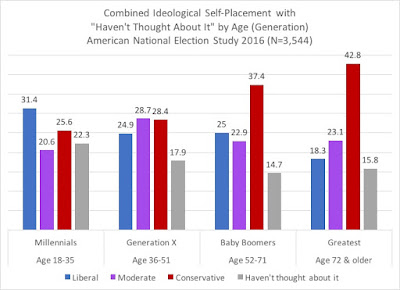 Not surprising, Millennials have the largest portion within a cohort that "haven't thought about it," while the oldest voters (Baby Boomers and the Greatest) have the lowest portions within their cohorts of "undecided" ideological identification.

Dropping the "undecideds/unknowns" out of the analysis paints an ideological picture of the four cohorts: 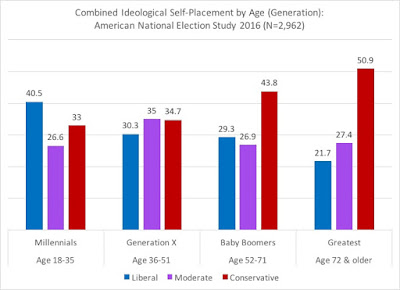 Conservatives claim a plurality of Baby Boomers (43.8 percent) and a majority of the Greatest Generation (50.9 percent), while Gen Xers are nearly evenly divided amongst the three categories. A plurality of Millennials, as documented in other surveys such as the Pew Research Center, are liberal in their ideology. But will Millennials potentially grow "more conservative" to match their older cohorts when they reach 50 years and older?

To compare, I went to the 2004 ANES Survey and, adjusting for the age categories, ran a comparison of ideological self-identification between the two election surveys. 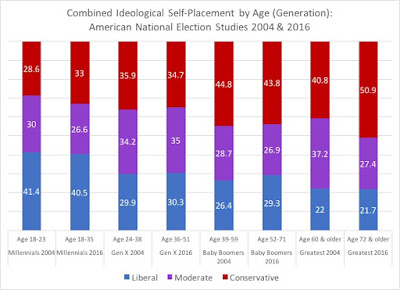 Having looked at both the partisan and ideological self-identification of the generations, I looked at the presidential vote choice among the cohorts: 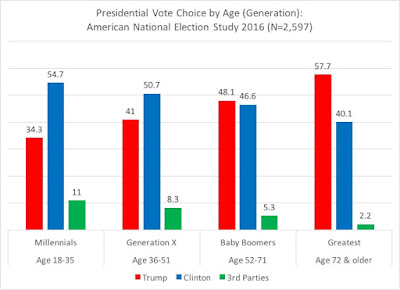 The almost mirror images among Millennials and Greatest generation cohorts is pretty striking: while nearly 55 percent of Millennials cast their ballots for Clinton, nearly 58 percent of the Greatest Generation went for Trump. While there was a 17 percentage vote gap between Greatest Generation voters for the two candidates, the 20 percentage vote gap among Millennials is significant, taking into account the likelihood that they are more liberal and more Democratic in identification.

The greatest vote share among the cohorts going to third-party candidates was, not surprisingly, among Millennial voters.

Much was made about the unpopularity of both major party's candidates. In looking at two questions about the presidential candidates and the respondents' feelings about the candidates, another generational divide emerged: first, as demonstrated in the combined "feelings thermometers" when asked about both Clinton and Trump.

A feeling thermometer asks a respondent, on a scale of zero to 100 (zero being ice cold, 100 being burning hot), to state a number as to how they felt about each candidate. In classifying "warmth" as being any response over 55 and "cool" as being any response under 45, I grouped each generation's responses to both candidates into the following "warmth" and "coolness" towards both Trump and Clinton. 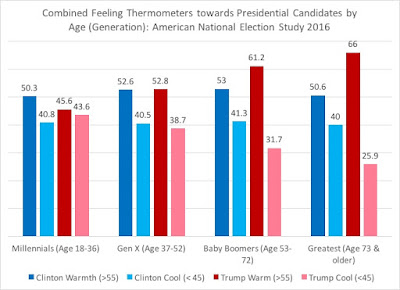 While all four groups saw consistently similar responses to Clinton, typically at 50 to 53 "warmth" and 40 "cool," it was the generational differences in responding to Trump that stands out: while Millennials were barely more "warm" than "cool" to the GOP candidate, the 30 to 40 percentage gap among warmth and coolness by Baby Boomers and the Greatest Generation is striking.

Another set of questions asked about whether the respondents were "never proud of" either candidate or were "always disgusted by" a candidate. 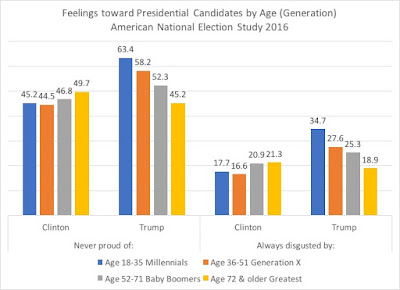 But even with this level of disgust by Millennials, it clearly did not translate into enthusiasm in their voting: 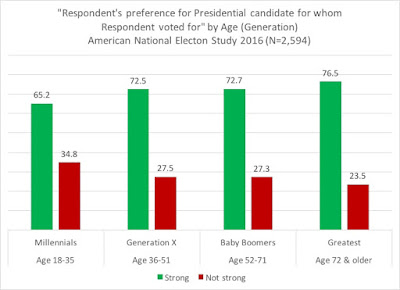 One of the more interesting findings regarding voting was a question posed in the ANES regarding the election integrity: does the respondent believe that the votes are being counted fairly?

For all of the talk about vote and ballot integrity, it was Millennials who had the lowest outlook on whether their vote would be counted fairly: 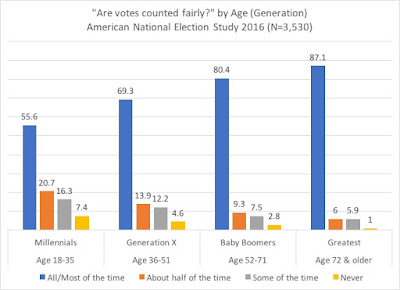 To wrap up, much of this ANES data is in line with another major study of the generational divide in American politics from the Pew Research Center. While older voters have higher participation rates than younger voters, and thus dominate the electoral fortunes, the tectonic shift that is currently underway in the country will reshape the political landscape.

In the next blog post, I'll be looking at this generational divide through the lenses of various policy issues and concerns, such as the state of the 2016 economy, transgender bathroom policy, the ACA's (Obamacare's) effect on health care costs, marijuana policy, and the role of government.
By OldNorthStatePolitics.com - July 25, 2017