I have a new blog post at WFAE's The Party Line on the growth, and what some might say as the disappointment in turnout, among North Carolina's fast growing 'unaffiliated' voters.
By OldNorthStatePolitics.com - September 26, 2014 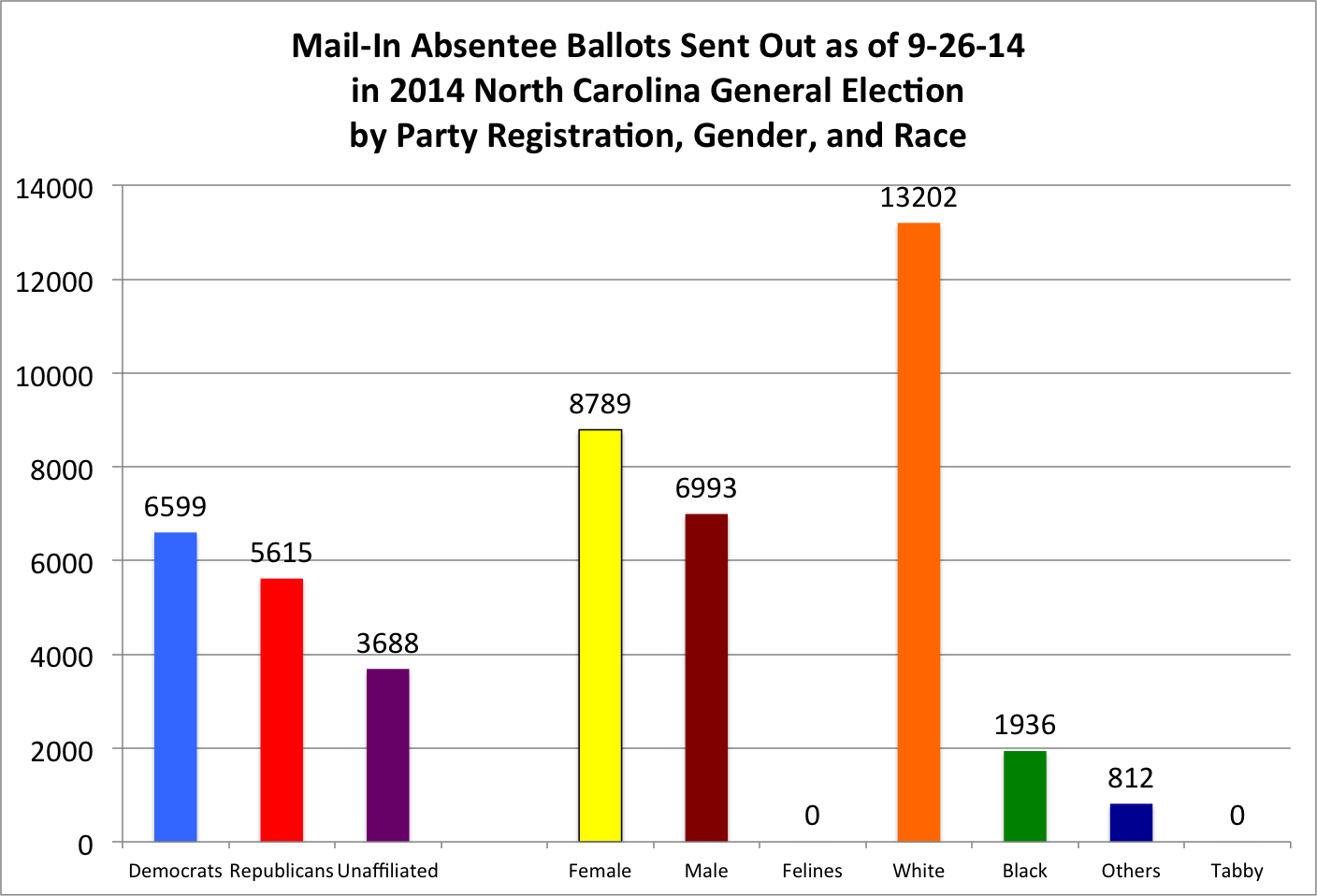 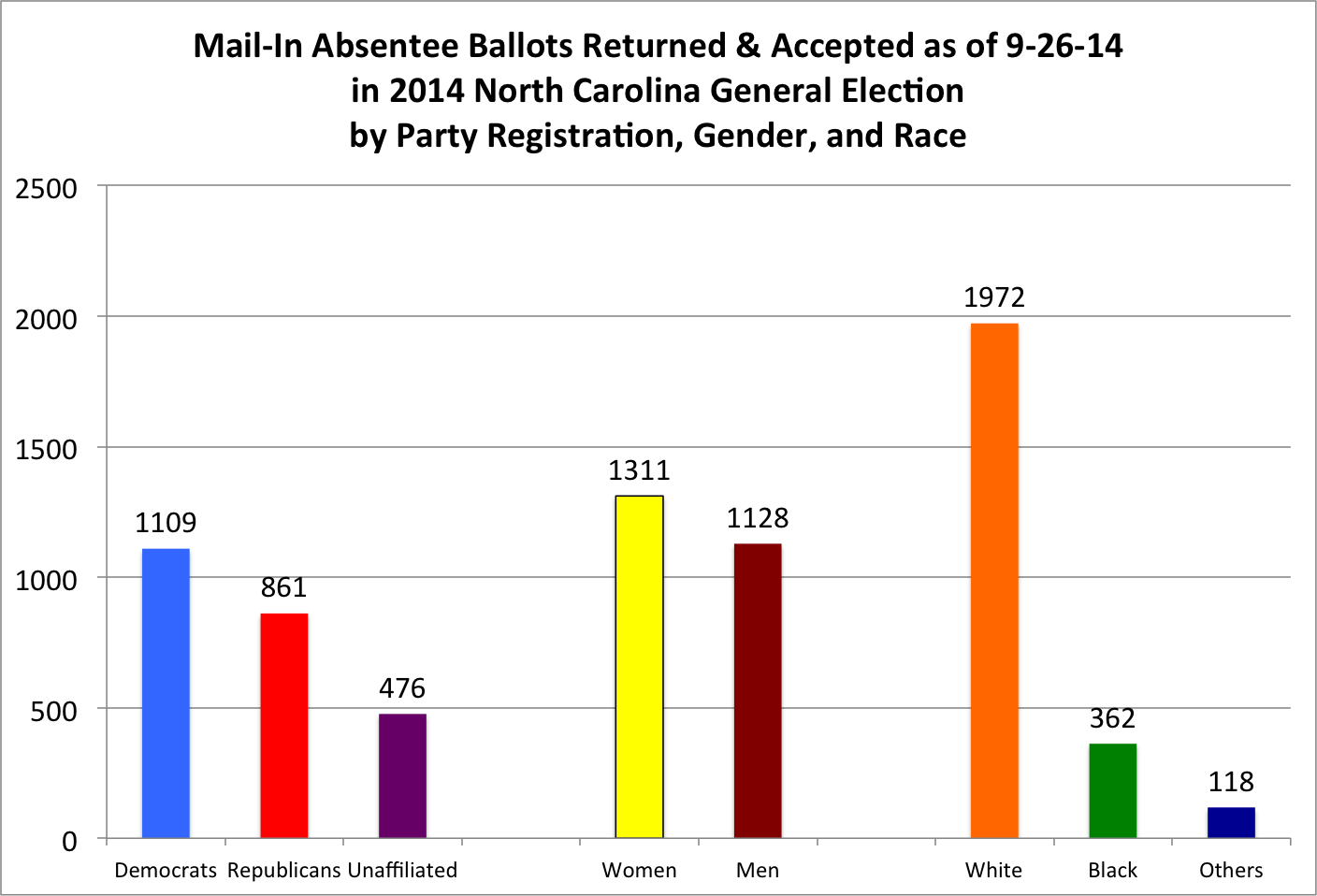 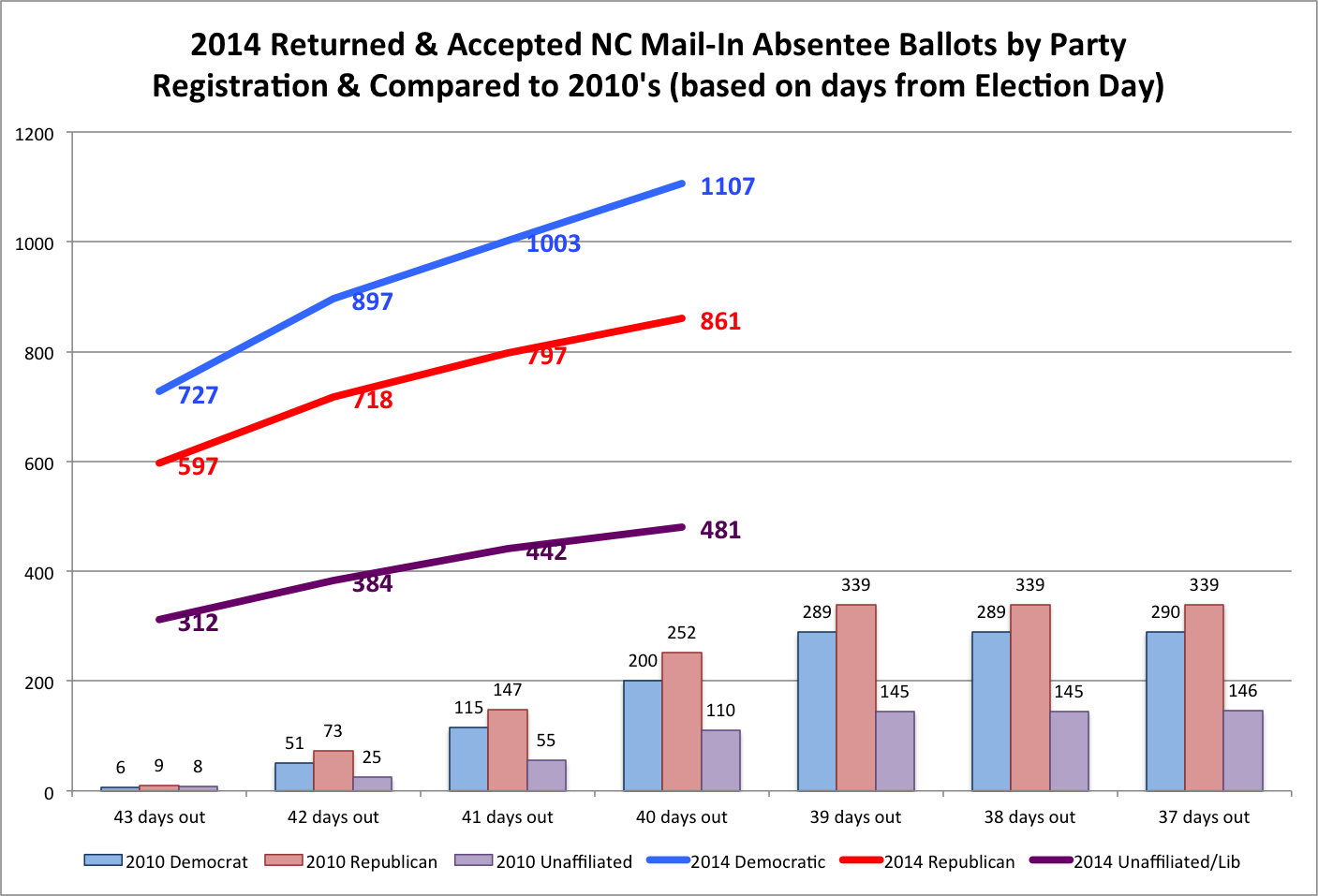 Not much has really changed with the steady stream of requests for and returns & acceptances of mail-in ballots in North Carolina's general election.

As of today, 15,147 requests have been submitted for mail-in ballots, an increase of 5% from the previous day.  Of these requests, 41% are from registered Democratic voters, 35% from registered Republicans, and 23% from registered unaffiliated voters.  Women are still 55% of the requested ballots, with white voters at 83% and black voters at 12%. 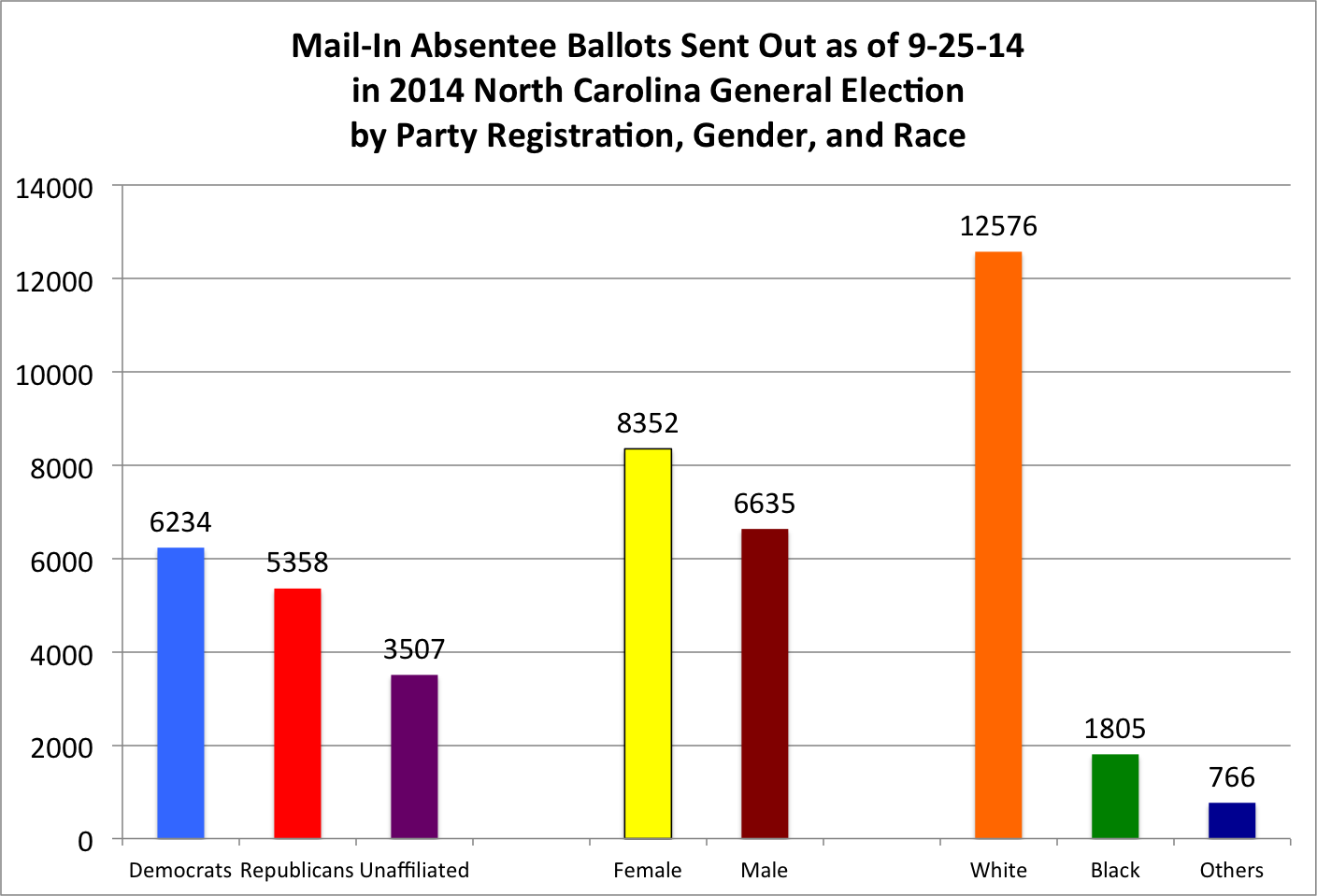 For returned and accepted ballots, 2,236 ballots are now considered votes (15% of the requested so far).  Democrats are right at 1,000 (45% of the total returned & accepted), with Republicans at 36% and unaffiliated voters at 19%.  White voters are 81% and black voters are 15%, slightly higher than their requested rate. 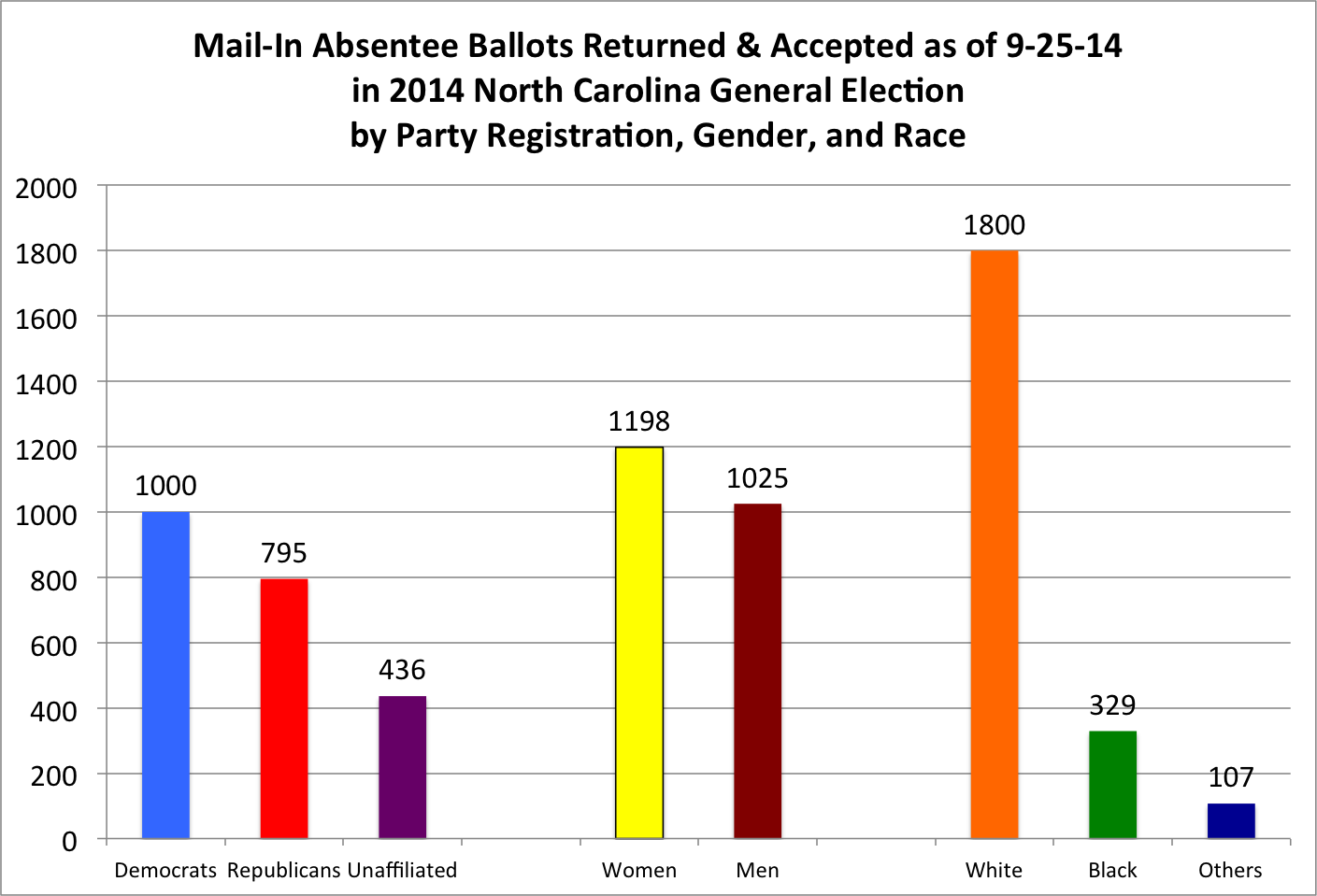 Finally, in comparing this year's mid-term election's mail-in ballots that are returned and accepted to 2010's same figures, the trend continues: this year's numbers are substantially higher, and Democrats continue their edge against Republicans (just a reminder: Republicans have traditionally been the plurality of ballots coming via mail-in). 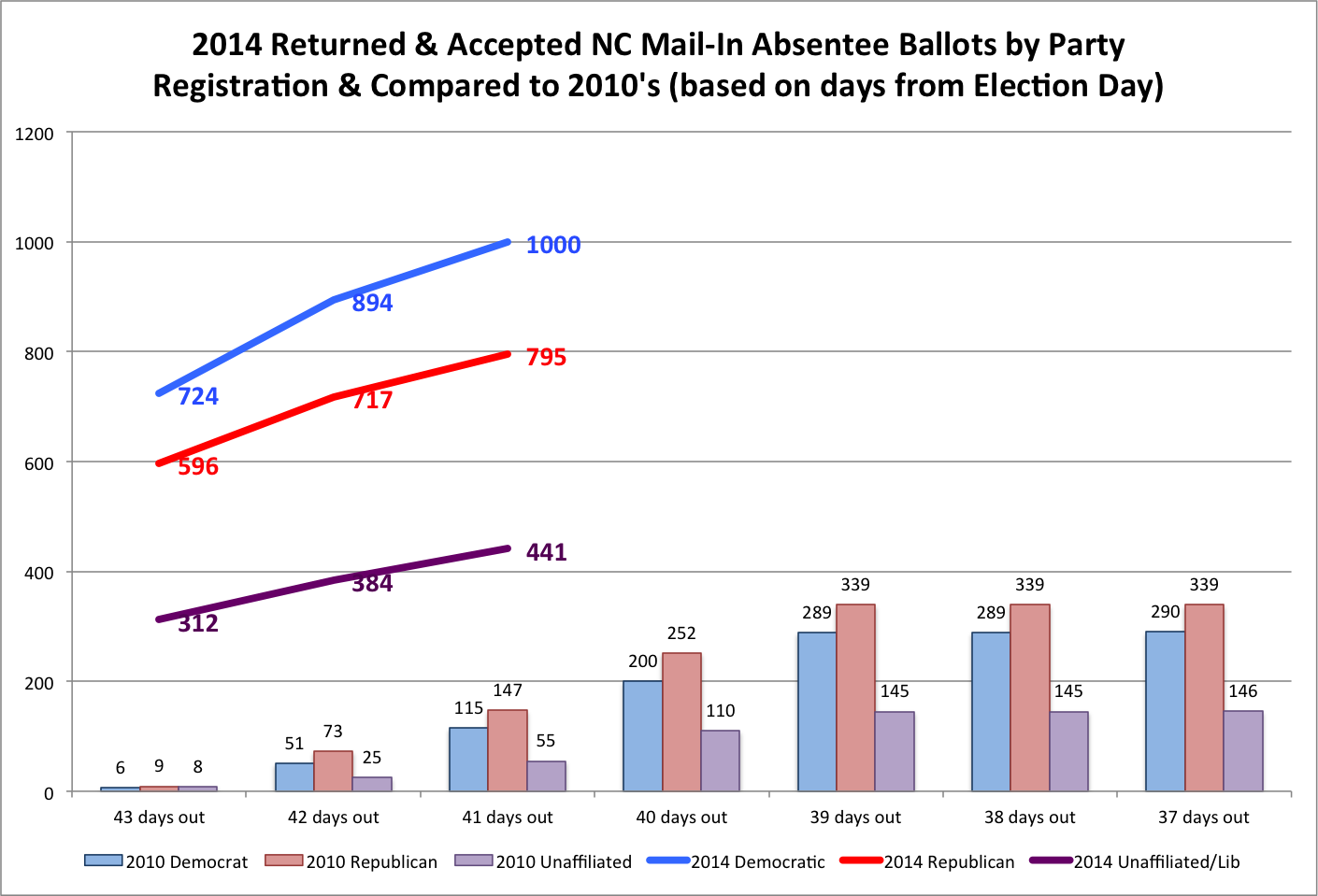 Again, the above chart tracks 'day-to-day' comparisons from Election Day out in 2010 and 2014 and the number of cumulative ballots for both parties that have come in to that day (today, Sept. 25, is 41 days out of from Election Day). 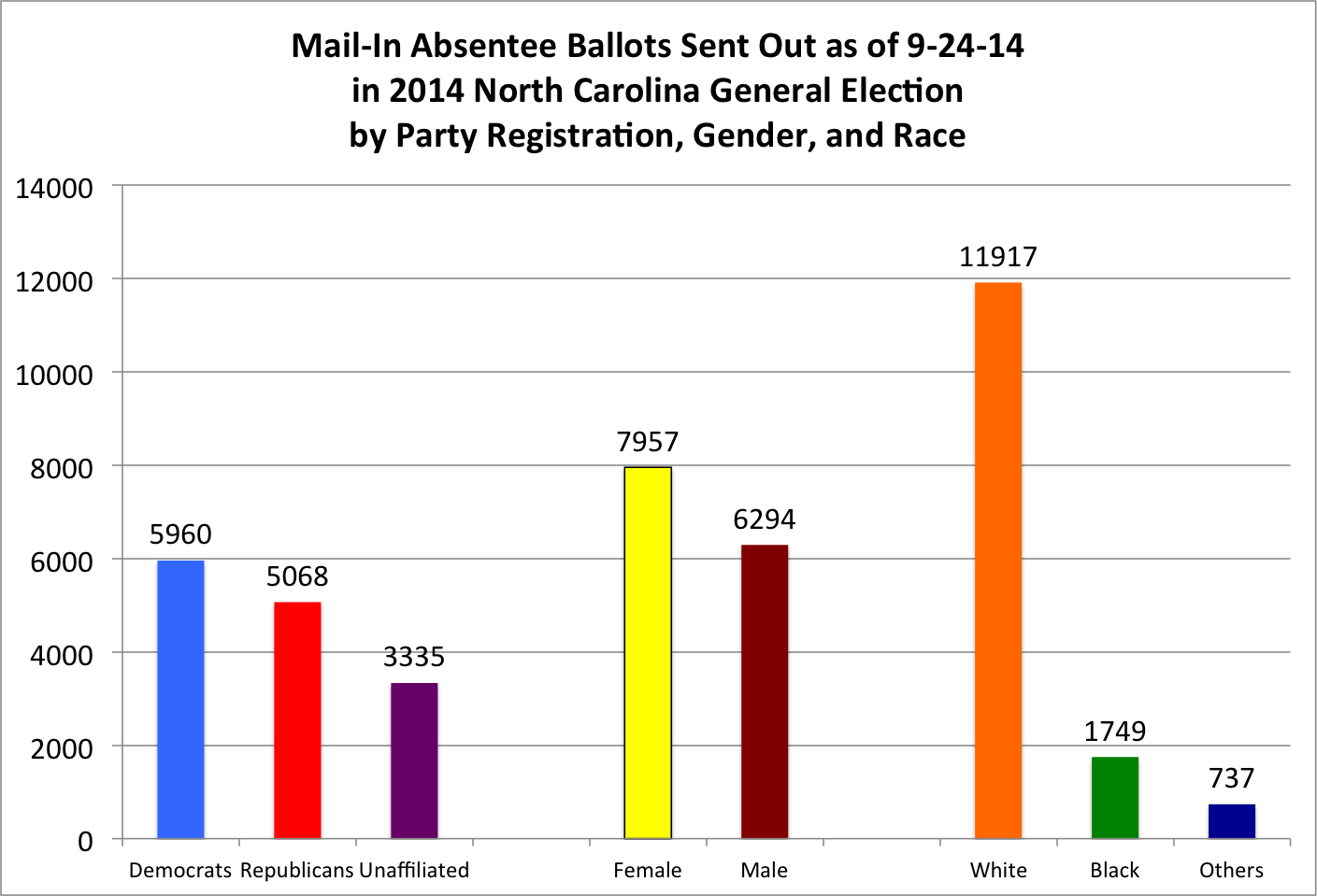 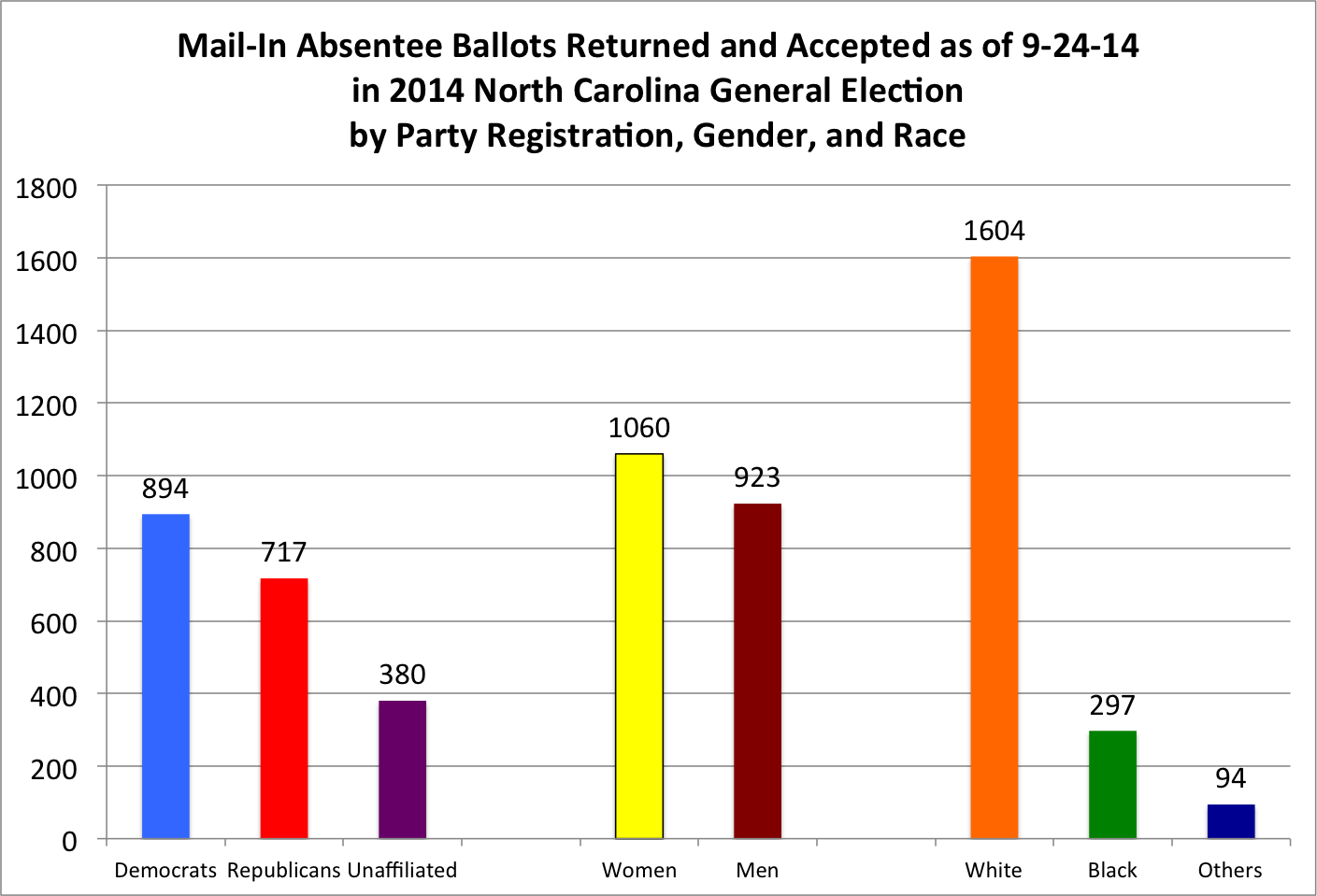 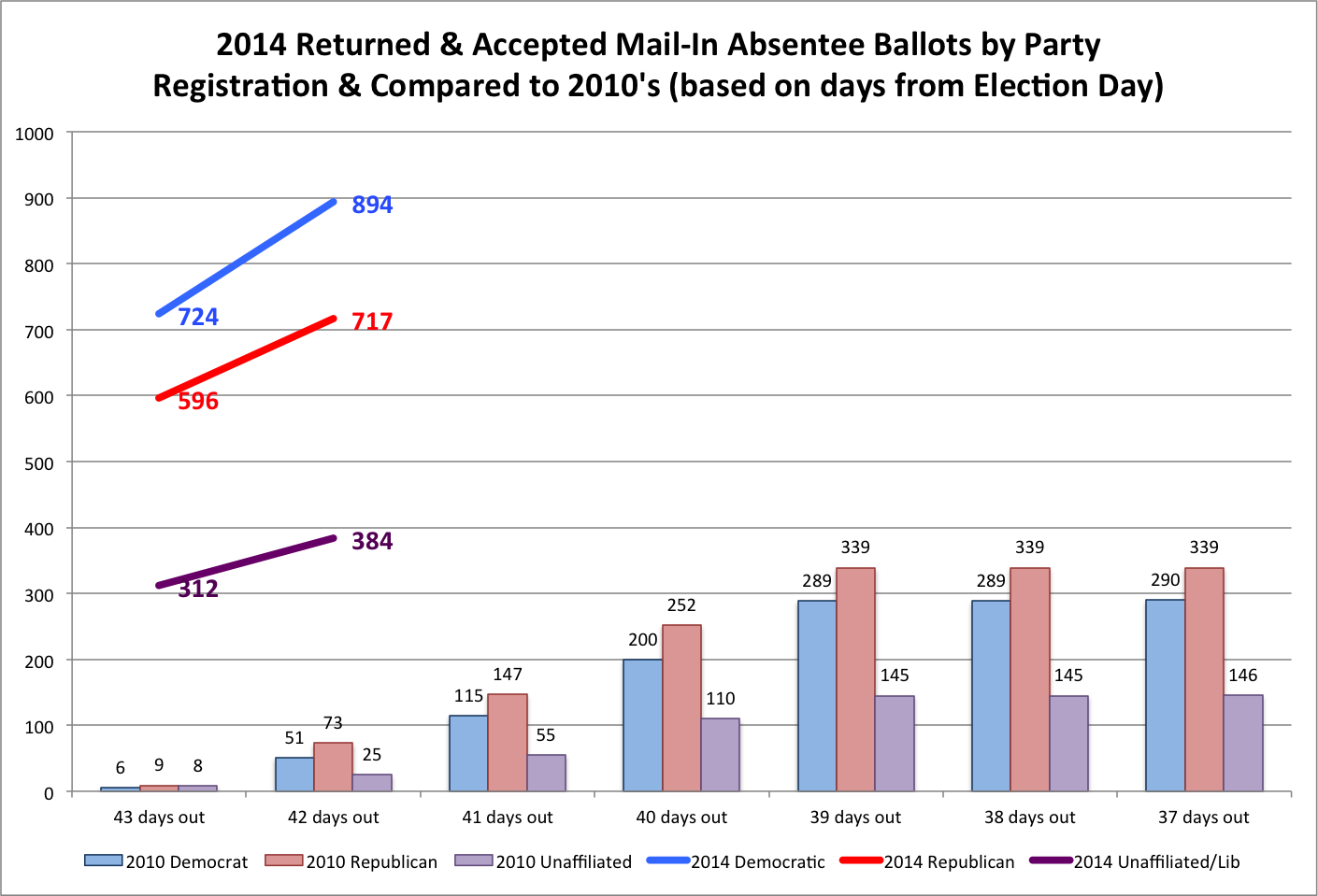 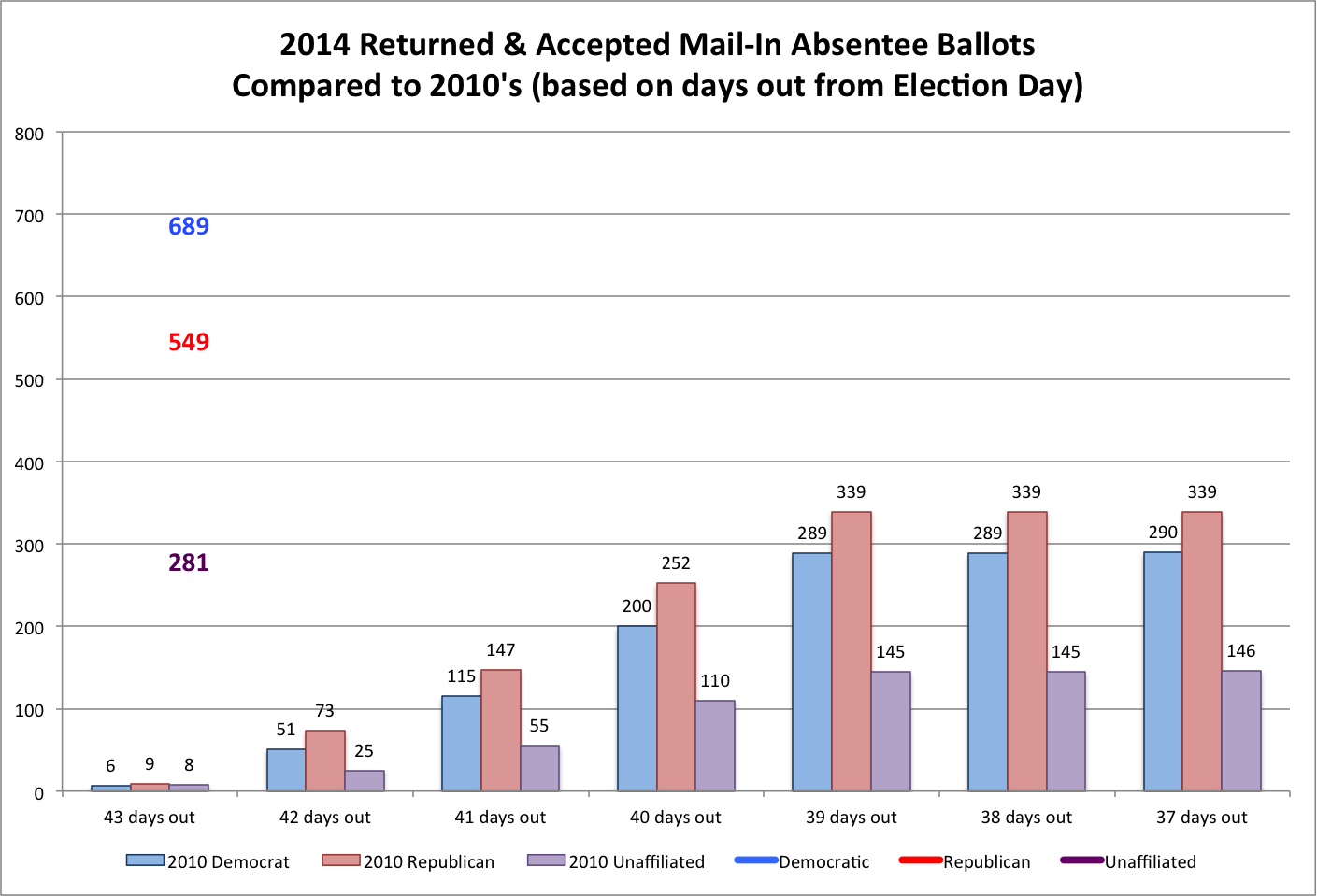 With the latest data file from the NC State Board of Elections, 13,648 North Carolinians have requested mail-in absentee ballots for the 2014 general election, with 1,622 (12%) of those requested ballots returned and accepted as votes in for the general election. As with previous analyses, the trends continue to be in the favor of registered Democratic voters. 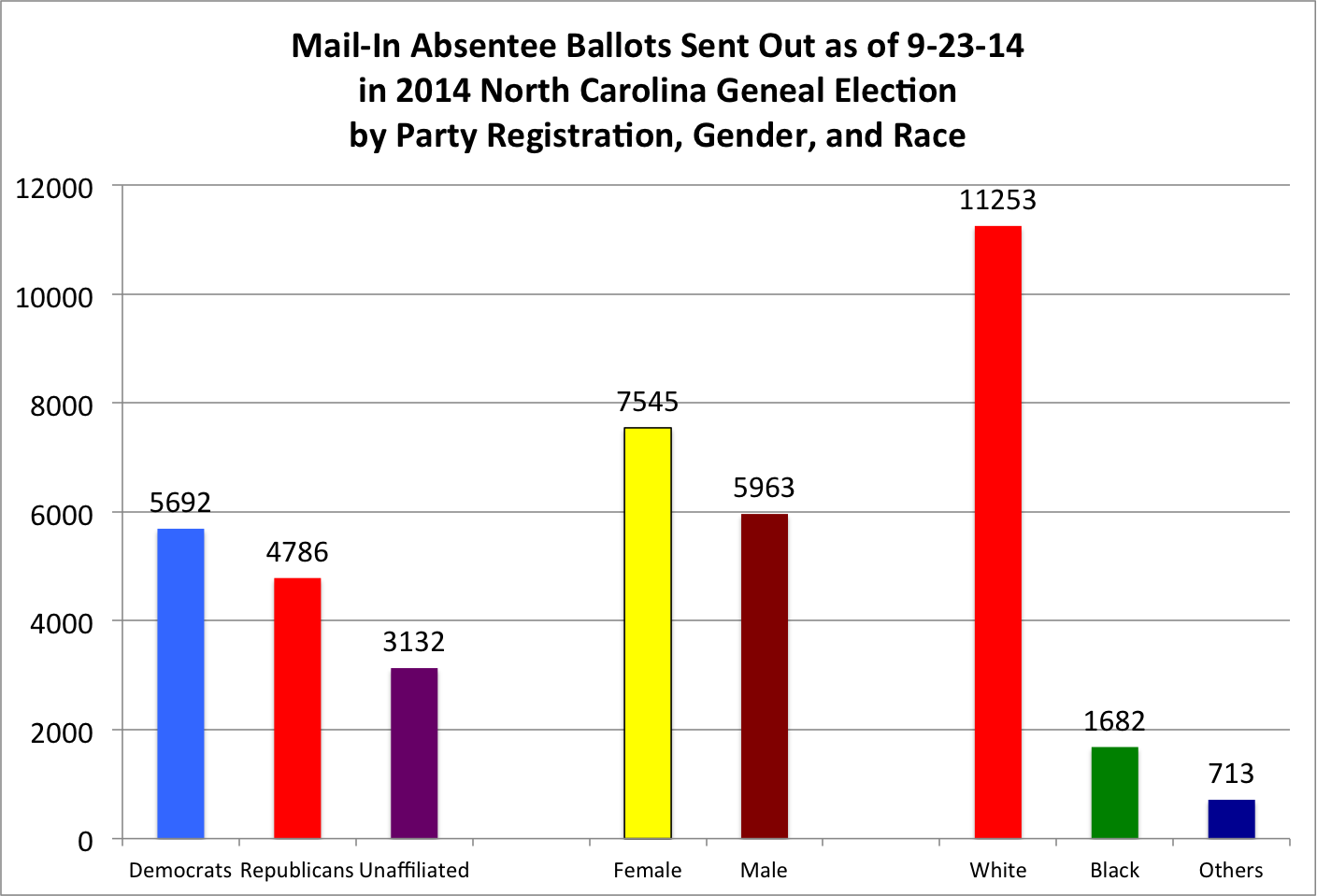 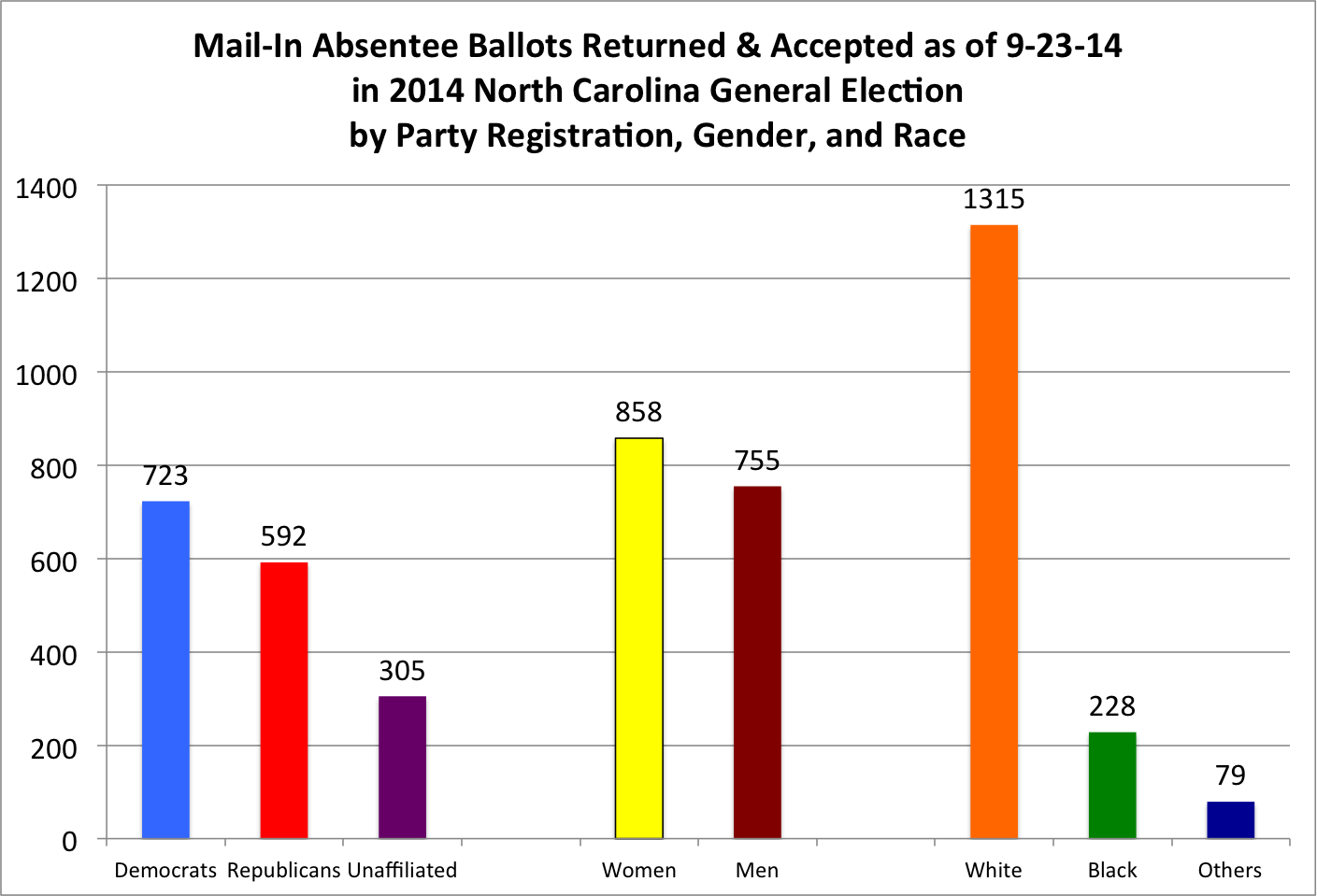 In comparison to the 2010 mail-in absentee ballots, this year's overall numbers are below 2010's, but Democrats are still leading in returned/accepted ballots over Republicans, which was the opposite from 2010. 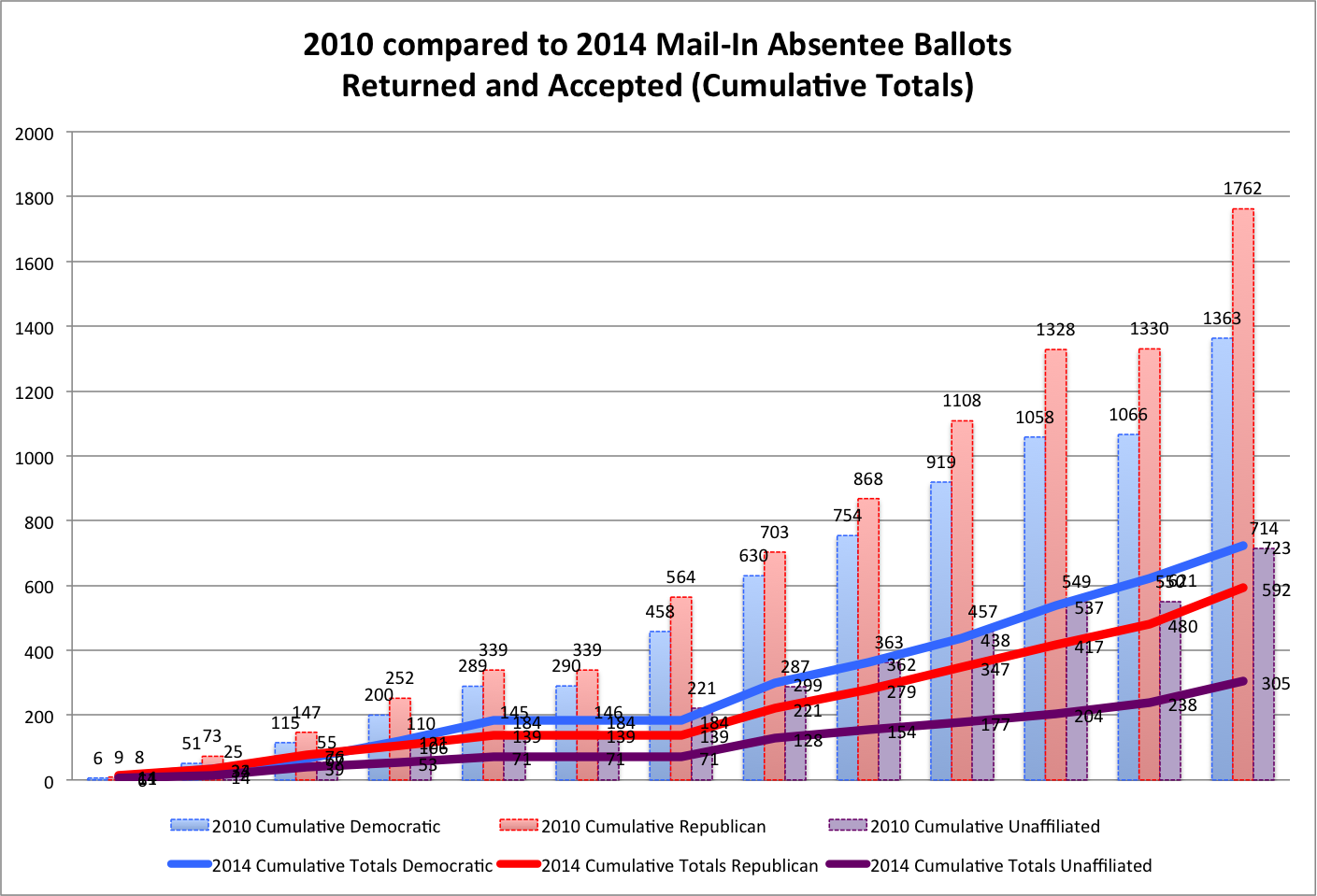 From these very early (and I stress, very early) figures, it would start to appear that Democrats are mobilized in their potential grassroots operation in an area that has traditionally been dominated by Republicans.
By OldNorthStatePolitics.com - September 23, 2014