For all absentee ballots, requested and by method (mail-in and in-person), 2,962,113 were recorded yesterday, with today's voting still to go (most counties go until 1 PM, but a few are later in the afternoon). 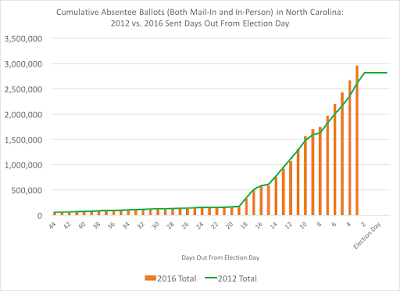 This year's ballots is 13.4 percent ahead of where things were on this same day in 2012.  The numbers by party registration and vote method are: 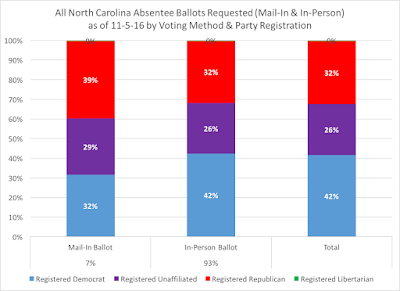 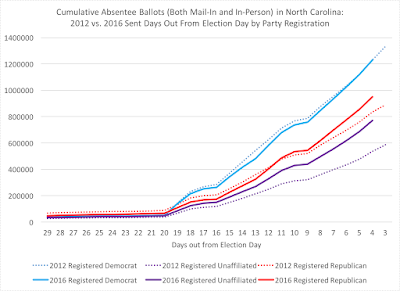 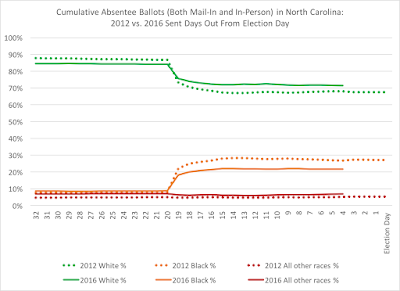 Black voters have been making up their deficit from four years ago, now down only 8 percent from their 2012 same-day numbers (down 59,200 ballots), with white voters up 19 percent and all other races up 53 percent.  This all other races category could be something to watch with their dramatic rise.

In terms of gender, women continue to be 56 percent of the ballots cast: 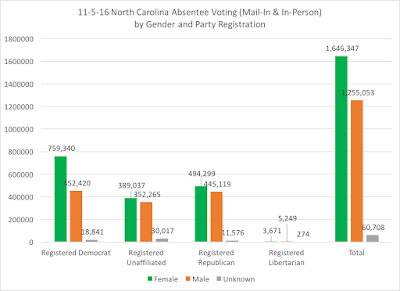 Next, the analysis moves to accepted ballots that will be counted as votes on Tuesday: 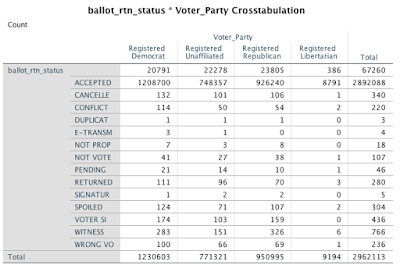 Among the party break down by voting method:

Among the accepted ballots, registered Democrats are 42 percent, Republicans 32 percent, and unaffiliated 26 percent. 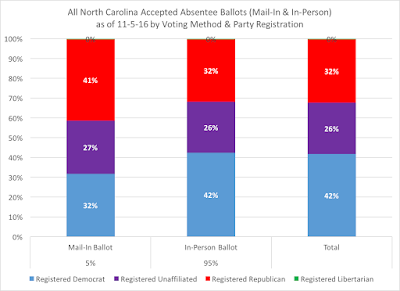 The overwhelming number of accepted absentee ballots continues to be from in-person voting, with the analysis shifting to that method.

For this year's 2.7 million accepted in-person absentee ballots, North Carolina has seen a 15 percent increase in this voting method in comparison to the same day total from 2012. 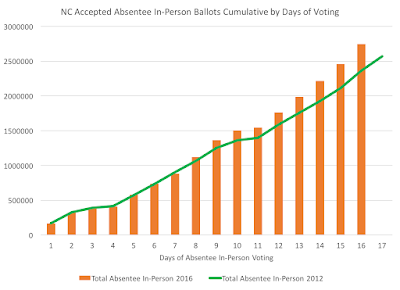 In comparison to 2012's same day totals, this year's trends continue the pattern of registered Democrats continuing to be a plurality of the ballots cast, but only meeting their same day totals from four years ago, while registered Republicans and unaffiliated voters are ahead of their same-day 2012 totals. 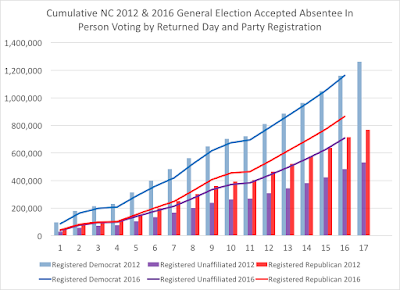 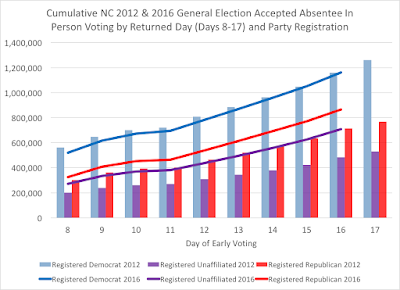 The daily percentage by registered party affiliation for the second half of in-person voting: 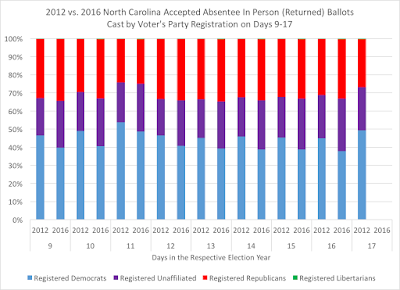 The racial composition of accepted in-person absentee ballots is: 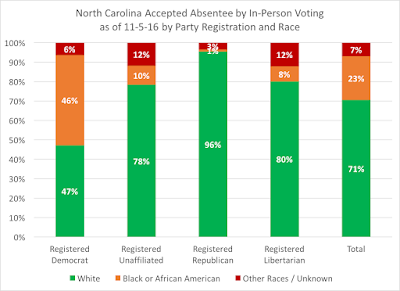 What is interesting is that the unaffiliated voter group has become more racially diverse over the past few days, making the white percentage drop down to 71 percent while the black percentage has creeped up to 23 percent.

The daily percentage of ballots cast by race is: 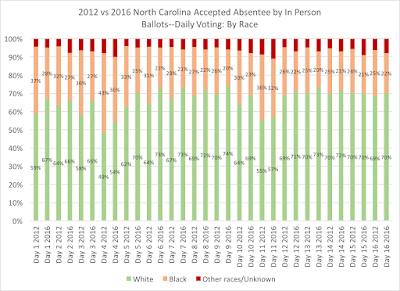 Among this year's in-person absentee voters, their voting method from 2012 has dropped among those being repeat in-person early voters to those folks who voted in-person in 2012 and weren't registered in 2012. 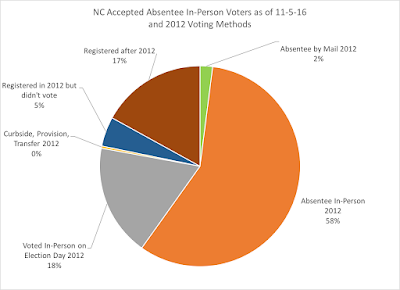 The analysis by region, native vs. born outside of North Carolina, and generations: 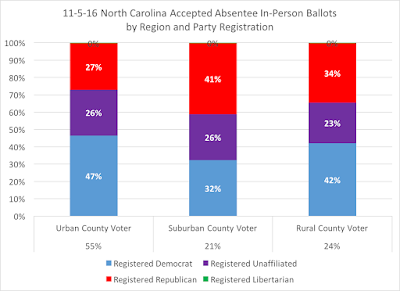 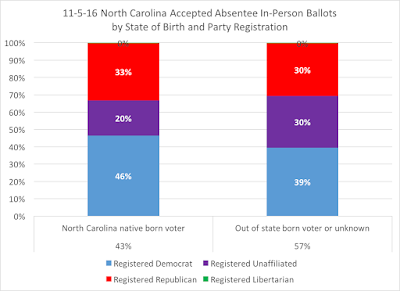 Among those born out of state, the interesting component is that unaffiliated voters are now equal in percentages to registered Republicans. 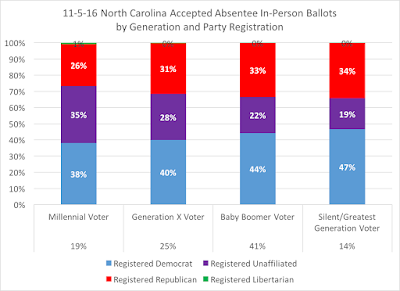 Millennial voters are continuing to inch up in their percentage, with Baby Boomers dropping to 41 percent from 46 percent early this week.

In the past few days, I've started looking at the turnout among registered voters in various categories. Today, I've decided to look at all accepted ballots (mail-in and in-person) to compare against the group's registration data.

First, the numbers and the percentages of turnout by race and registered party affiliation among all accepted absentee ballot voters: 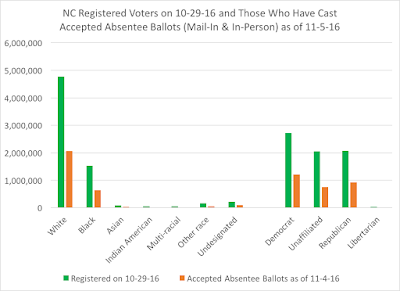 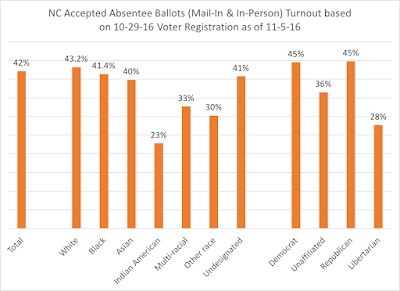 It should not be surprising that registered unaffiliated voters are a lower turnout rate than partisan voters.

Next, by gender, nativism, region, and generation among all accepted absentee ballot voters: 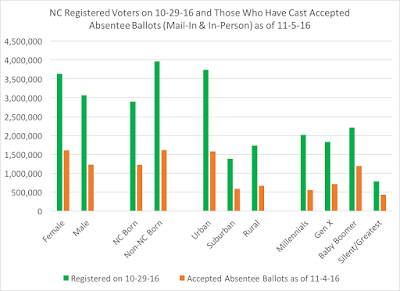 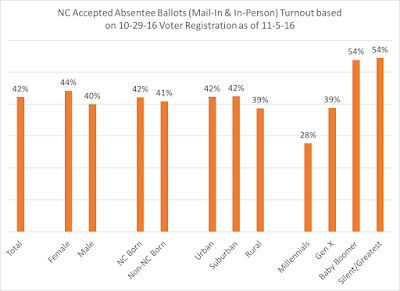 What's interesting is that the rural county turnout rate is slightly behind the urban and suburban group; one would think rural voters would be the 'great missing voter' who would be showing up for a particular candidate, but this doesn't seem to be the case so far in early voting when compared against urban and suburban voters.

The other noticeable trend is in the generation cohorts, with both Baby Boomers and Silent/Greatest generations well over 50 percent turnout so far; millennials are lagging, and will be interesting to see if they show up on Election Day.

I just ran some further analysis on all accepted absentee ballots (both mail-in and in-person) with some crosstabs. First, the registered party registrations by their generation cohorts: 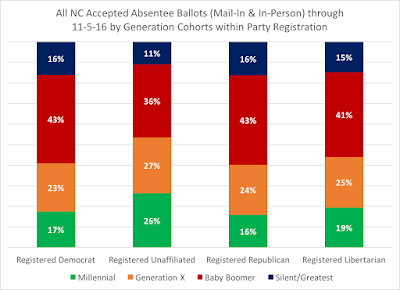 While a majority of both registered Democrats and Republicans are older (more than 51 years old, belonging to Baby Boomer  and Silent/Greatest generations), registered unaffiliated voters are a majority under the age of 50 years old (belonging to Generation X and Millennials). 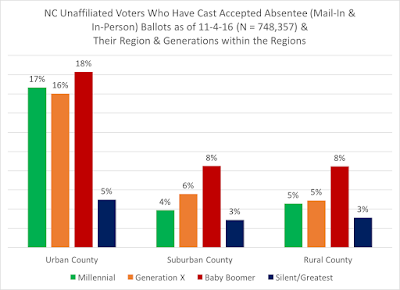 One third of all unaffiliated voters are either Millennials or Gen Xers living in an urban county in North Carolina. The 'assumption' of these voters is that they would lean Democratic in general. But we'll have to wait and see what happens Tuesday, especially through North Carolina's exit polls.