I decided to run some final analyses on today's (9-23-16) NC absentee mail-in ballots that have been requested, most notably by the region of the state (urban county, suburban county, rural county) and party registration.

What struck me was the dominance, this early, by urban county voters using mail-in balloting. 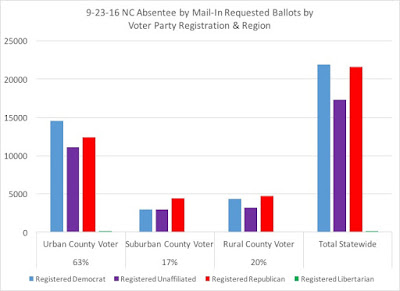 Here are the party registration percentages for each region: 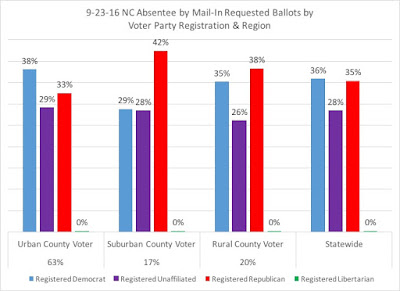 If one was to make an 'educated guess' about these trends, urban Democrats are most likely pure-party loyalists, meaning that they will likely vote for their party's nominee. Conversely, the legacy of native, rural, conservative Southern Democrats who may be registered Democratic are more likely to be Republican voters. However, the impact of non-native North Carolinians could give more of a sense of 'party-loyalty' based on voter registration (a big if, mind you).

One more set of analysis was the number of native North Carolinians compared against non-native born voters, split by region: 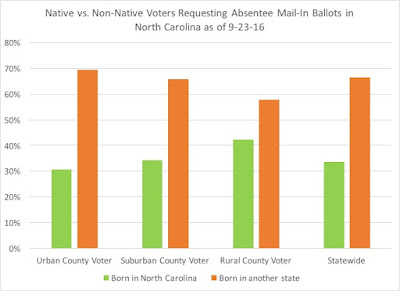 Non-native North Carolinians are two-thirds of the requested 61,000 mail-in ballots so far, and are nearly 70 percent of the urban county voters requesting ballots. Not surprising is that the closest 'region' based on native vs. non-native are rural counties.

Two more: here is the breakdown by generations and regions: 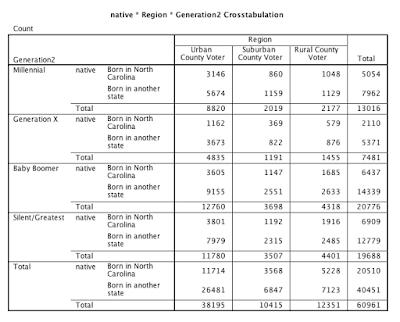 And then by party registrations and regions for native vs. non-native NC voters who have requested mail-in ballots: 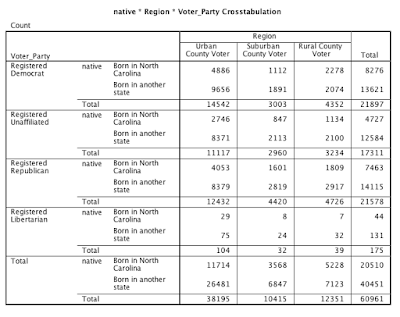 It will be interesting to see if this trend of non-native North Carolinians continues at such a high percentage over the next few weeks.

I'll post something tomorrow morning before taking the weekend off and be back on Tuesday with Monday's requests and processing.
By OldNorthStatePolitics.com - September 23, 2016

Ran some further analyses of the 9-23-16 North Carolina accepted mail-in ballots (total = 5,426) and whether these voters had shown up in 2012 and their voting methods that year.

The following graphs show the over numbers and voting methods (and if they didn't vote), the party registration for each, and the generational cohort: 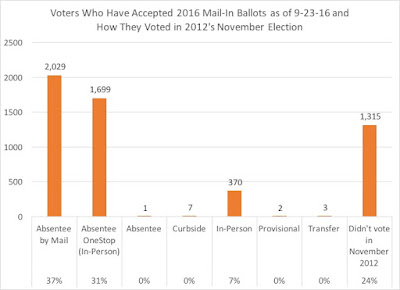 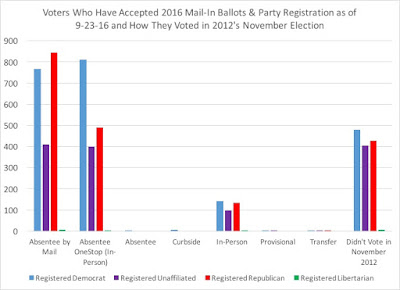 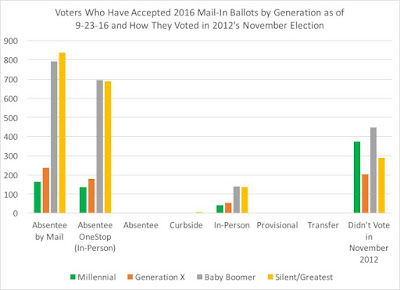 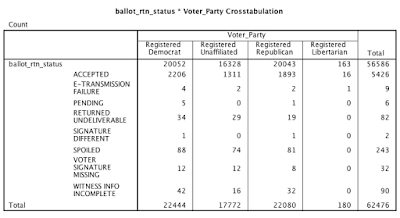 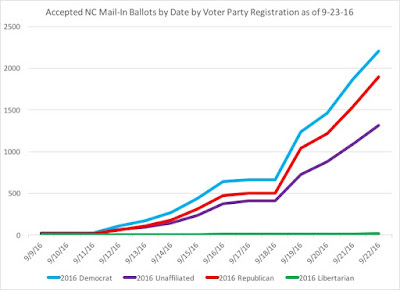 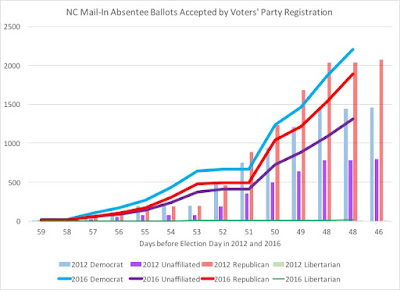 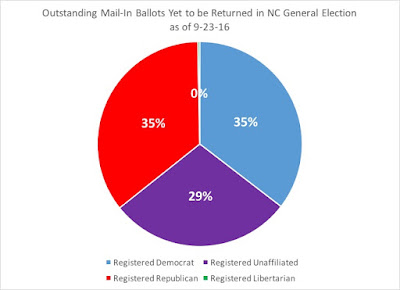 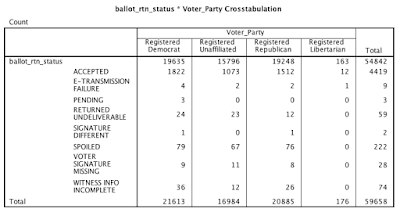 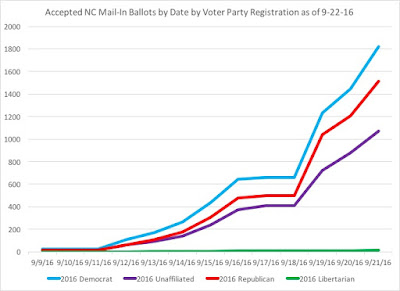 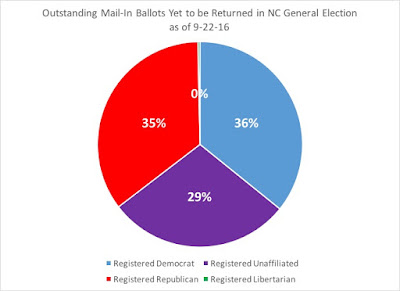 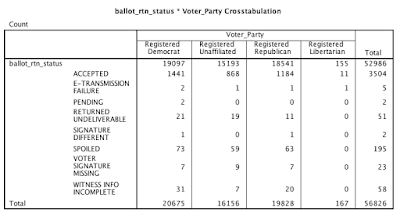 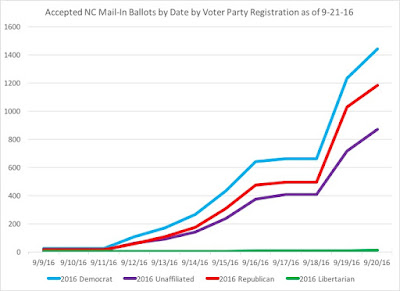 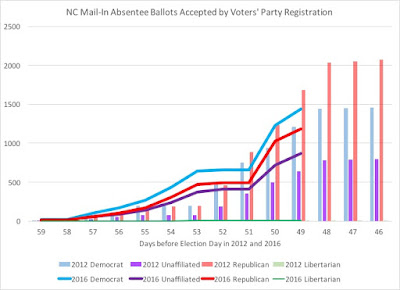 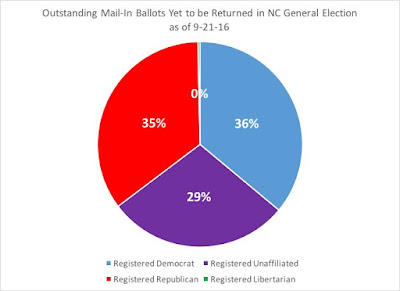 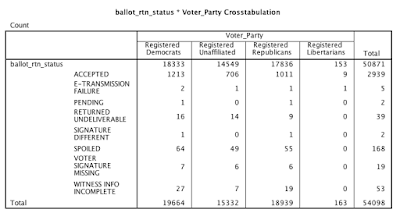 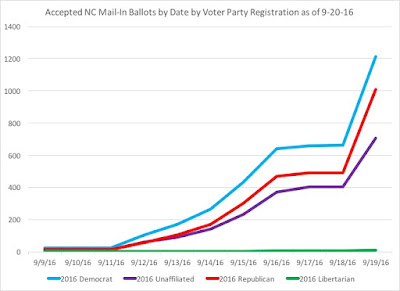 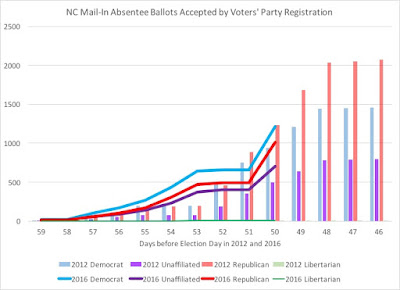 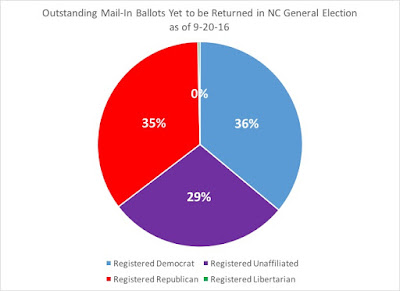 As we await the updated numbers from the NC State Board of Elections and the 100 counties about the mail-in absentee ballots requested and received (on Tuesday, due to mail from the weekend and processing the bulk on Monday), some further information on the voters who have requested NC mail-in ballots.

I was curious what this year's voters, who have requested mail-in ballots in 2016, did in 2012: did they vote four years ago, and if they voted, how? 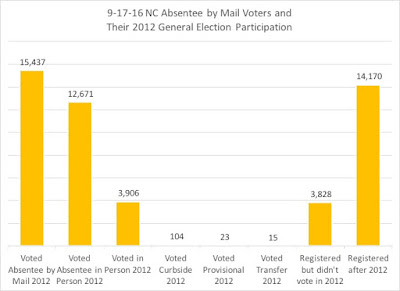 Then, breaking these numbers into percentages, we find the 50,000 voter pool who have requested mail-in ballots with their 2012 activity to be the following: 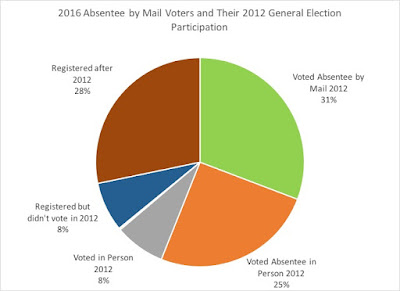 Finally, I looked at the group who registered after 2012 (28% of the 50K plus mail-in ballot requests as of 9-17) and broke that group by their current party registration: 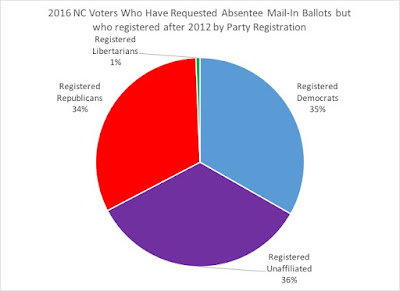 Of course, we only have a week of mail-in ballot requests and even more importantly, of accepted ballots, so far, but it seems like there is an interest in 'banking one's vote' earlier this year, considering that less than 1/3 of the voters requesting mail-in ballots this year did the same last year. Another such analysis of the second week of mail-in balloting will be useful to see if these trends hold.
By OldNorthStatePolitics.com - September 18, 2016