An abbreviated version of today's posting: all North Carolina absentee ballots have hit over 1.7 million, with nearly 1.6 million accepted as early votes for the November 8 general election (12:15 PM: updated with new information found below).


The 1.7 million ballots, which accounts for all absentee ballots (mail-in and in-person) by sent date, represents a 6.8 percent increase over the same-day cumulative total from 2012's general election absentee voting period (1.59 million). 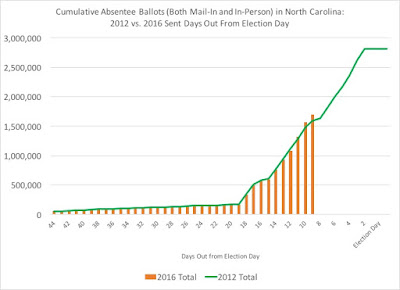 Currently, registered Democrats are 43 percent of all ballots, with registered Republicans at 31 percent and registered unaffiliated voters at 25 percent; but there are differences in the voting method. 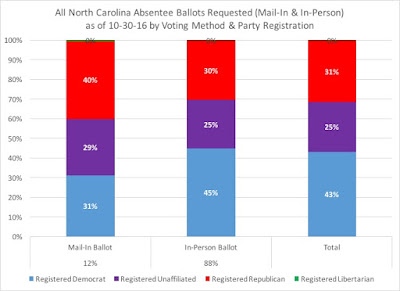 However, there are differences between the party registration within this total absentee ballot pool in comparison to four years ago on this same day. 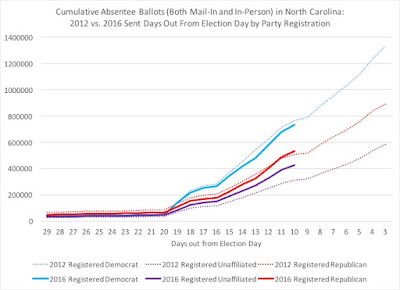 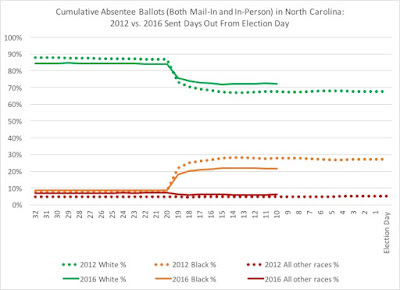 Updated: some have asked about the "all absentee ballots for white voters by party registration" to see if the trend lines are still comparable to 2012's percentages of white voters by registered party. Here is the information updated to today based on all sent ballots: 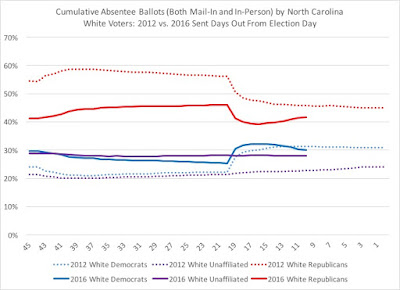 In looking at differences based on gender, female voters still make up 56 percent of all absentee ballots so far: 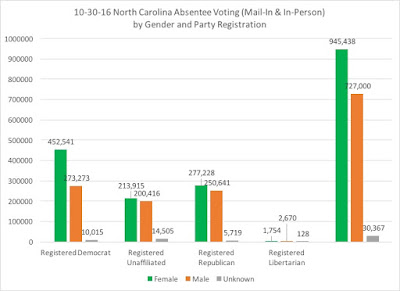 Among all the absentee ballots so far, the returned status of the ballot are: 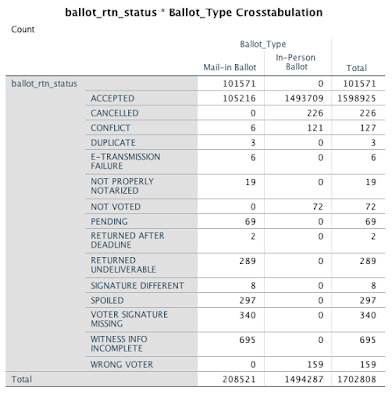 Of the 1.7 million absentee ballots, nearly 1.6 million have been accepted, with registered Democrats at 44 percent, registered Republicans at 31 percent, and registered unaffiliated voters at 25 percent. 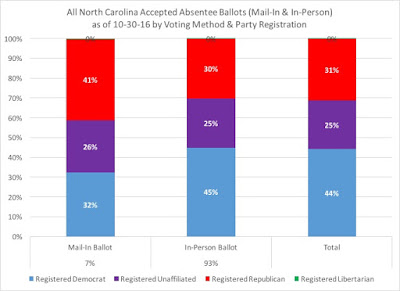 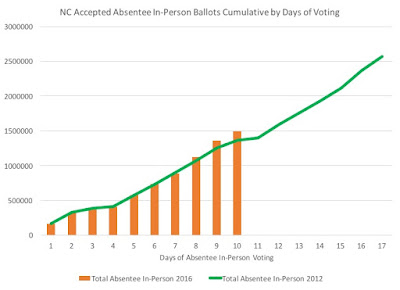 The return status of in-person ballots are:

While there are more ballots than four years ago, of the accepted in-person ballots so far, registered Democrats are slightly behind their 2012 same-day totals (down 4 percent), while registered Republicans are ahead (14 percent) and registered unaffiliated voters are well ahead (41 percent) of their same day numbers from four years ago. 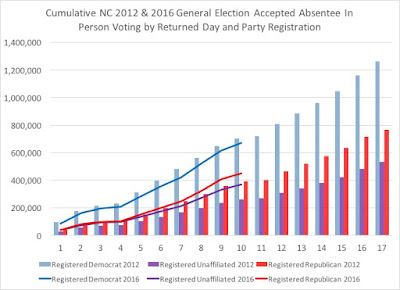 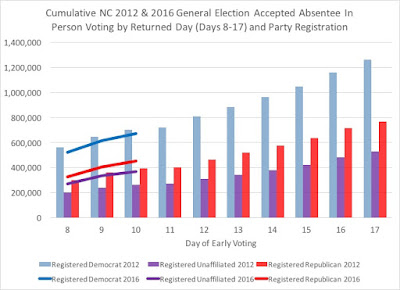 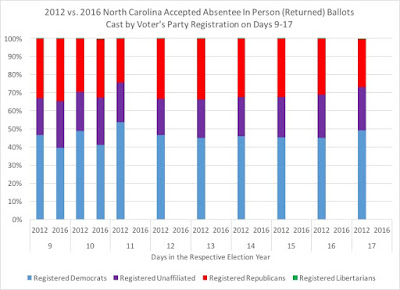 Among racial percentages of in-person ballots accepted, here's by party and the daily percentages by race for the first ten days: 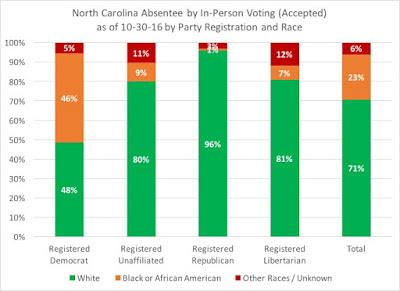 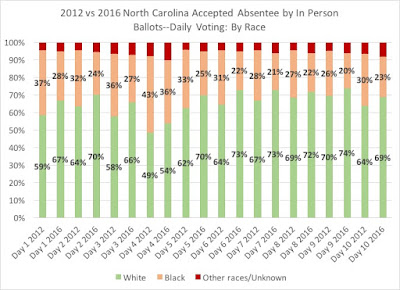 Another update: there are three areas that I am interested in: regionalism in North Carolina (meaning, the differences between urban, suburban, and rural voting patterns), native-born vs. born out of state, and generations. Here are today's updated charts for these three areas: 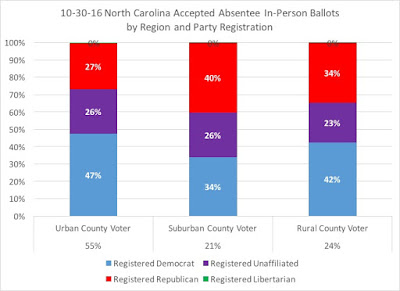 Urban voters continue to dominate this year's numbers, as they did in 2012, though four years ago, when in-person absentee voting finished, urban county voters were 57 percent of the ballots; among those urban county in-person ballots, registered Democrats were 52 percent. 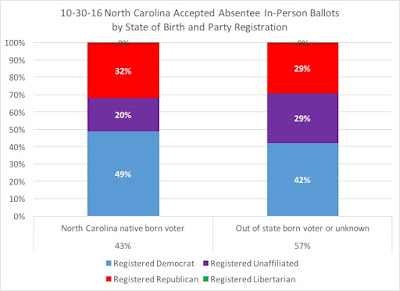 Unfortunately, the birth state information isn't available for the 2012 numbers, so no comparison can be made, but the fact that non-native voters are a significant majority is an interesting trend. 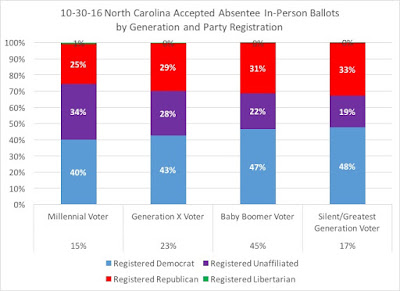 Finally, among the generations, Baby Boomers continue to be a significant plurality of voters; in 2012's final in-person absentee ballots, Baby Boomers were 41 percent of the ballots.


The cumulative totals of mail-in ballots still lags behind 2012's over numbers for the same day (2016's numbers are 82 percent of where things stood in 2012): 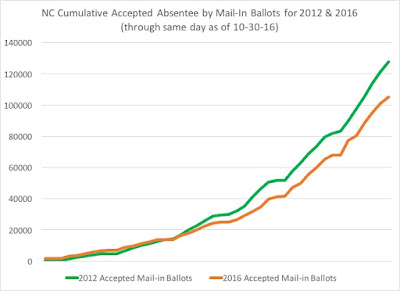 This is due mostly to registered Republicans not at their same numbers from four years ago, even thought they still lead in percentages (41 percent to 32 percent Democratic and 26 percent unaffiliated): 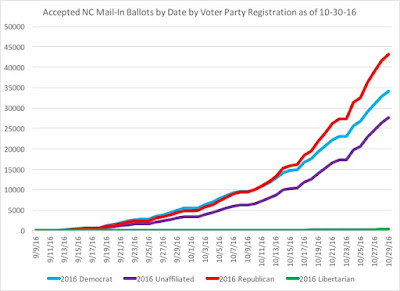 The comparison to 2012's same day totals by party shows the stark differences: 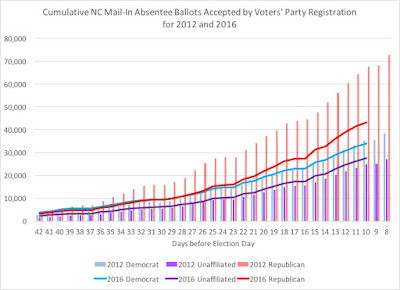 Finally, outstanding ballots (roughly 101,000) are still from registered Republicans, but that pool is starting to shrink over the past few days: 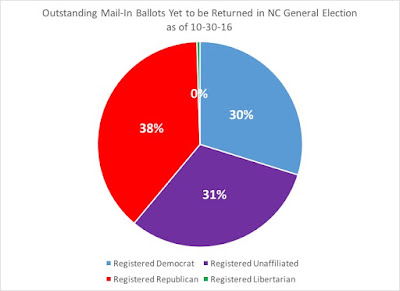 I hope to have some more analysis later tomorrow. Today's absentee voting, by in-person, will be another key test, especially with the likelihood of "Souls to the Polls" activities across the state.
By OldNorthStatePolitics.com - October 30, 2016