Lay of the Political Landscape: An Analysis of the 2020 North Carolina State Senate Races

This is the second in a series regarding the 'state of the field' when it comes to the North Carolina General Assembly, the U.S. House districts, the gubernatorial contest, U.S. Senate race, and the presidential contest in North Carolina. Between now and early September, each week will see a new post analyzing the data and dynamics and giving some assessment (but not a forecast) of what to look for in November. This week we posted an analysis of the state's 7 million registered voters, and continue this week with the upper chamber of the General Assembly, the North Carolina state senate. In the coming weeks, we'll have the companion legislative analysis for the state house, along with the congressional, gubernatorial, U.S. Senate, and presidential contests in the Old North State.

It is relatively easy to keep up with national and state-level races. Polling results, campaign finance data, and career details of the candidates are available to anyone with access to a library card, newspaper subscription, or keyboard. State legislative races, however, can be more difficult to follow. Their sheer number makes them hard to keep track of (170 in North Carolina), and the diffuse nature of state politics means that there’s not “one source” to find most of this information across all states.

This is a problem not just for politicos, but for anyone who wants to follow what we would argue is the most important policy-making body for issues that affect people’s lives. Concerned about voting rights/voter security, abortion rights/right to life, gun rights/gun regulation, the quality of the roads you drive on, or economic development issues? The fault lines on those issues lies squarely in the purview of the state legislature.

In order to attempt to bridge the gap between importance and knowledge, this entry provides a brief(ish) update and analysis on the 50 races for North Carolina Senate in 2020. One of us (the one with the trademark bow-tie) posted a similar analysis in February. This one builds off of that base with some new data and some new analysis.

As we draw closer to this month's nomination conventions and then Labor Day's 'unofficial' official start to the fall campaign season, Old North State Politics will be running a series looking at the 'lay of the political land' when it comes to North Carolina's pool of registered voters, the General Assembly, the thirteen U.S. House districts, and the gubernatorial, U.S. Senate, and presidential contests. Between now and early September, each week will have a new post analyzing the data and dynamics and giving some assessment (but not a forecast) of what to look for in November. This week we start with a ground-level analysis of the state's registered voter pool, followed later this week with the upper chamber of the General Assembly, the North Carolina state senate.

As we inch towards the general election on Tuesday, November 3rd, we are starting to see North Carolina's voter registration pool shape up, with some key demographics and factors at play in the eligible pool of voters. And even with COVID-19, the numbers are on pace with four years ago, although there are some interesting patterns shaping up within the voter pool.

Recently, North Carolina again went over 7 million registered voters, which the state has done before, but due to comprehensive maintenance of the voter rolls, that number dipped below 7M in January 2019 thanks to the removed voters.

With the August 1, 2020 statewide data file, we can look at not just the current standing of registered voters in the Old North State, but we can also get a profile of this year's registered voters who have been added to the pool so far.

Of the 7,040,308 voters in the August 1 data file, party registrations have remained consistent throughout the year: 36 percent are registered Democrats, 33 percent registered Unaffiliated, and 30 percent registered Republicans, with the remainder made up of registered Libertarians, Greens, and Constitution party voters. 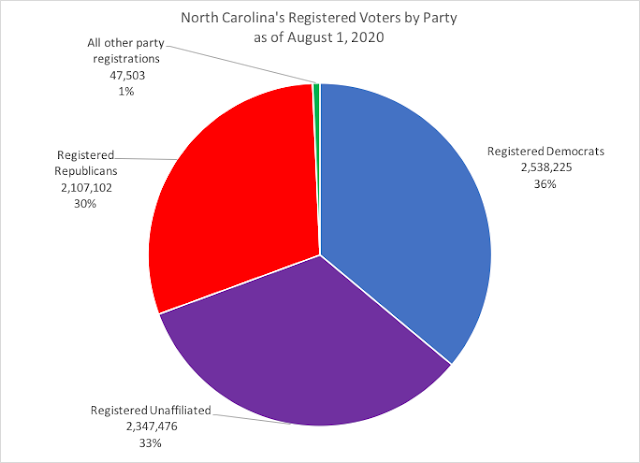