Where is the Surge of Democrats & Unaffiliated Voters In NC's Mail-In Ballots?

What has been most notable about North Carolina's mail-in ballots for the 2014 general election has been the surge in not only ballots from registered Democrats but from unaffiliated voters as well.

The other posts so far have been tracking the cumulative and daily totals of the mail-in absentee ballots, but with this post, I wanted to take a look at the location of these mail-in ballots to get a sense from 2010's election.

In terms of the counties with the largest overall requested ballots (for all voters), it is the typical counties that you would expect to see:

In looking at the state's one hundred counties, 33 counties are seeing registered Democrats requesting ballots at a level over 50 percent from their 2010 total numbers; for example, Greene County's requested ballots from Democrats is 268 percent over their total 2010 accepted ballots number. Two other counties, Bladen and Onslow, are also over 100 percent in requested ballots compared to their 2010 final accepted ballot totals.

Only 10 counties have registered Republicans over 50 percent of their requested ballots from 2010's total mail-in absentee ballots.

Below is a map indicating the counties where Democrats, Republicans, and unaffiliated (or some combination thereof) are currently at 50 percent in requested ballots compared to their total 2010 mail-in accepted ballots. 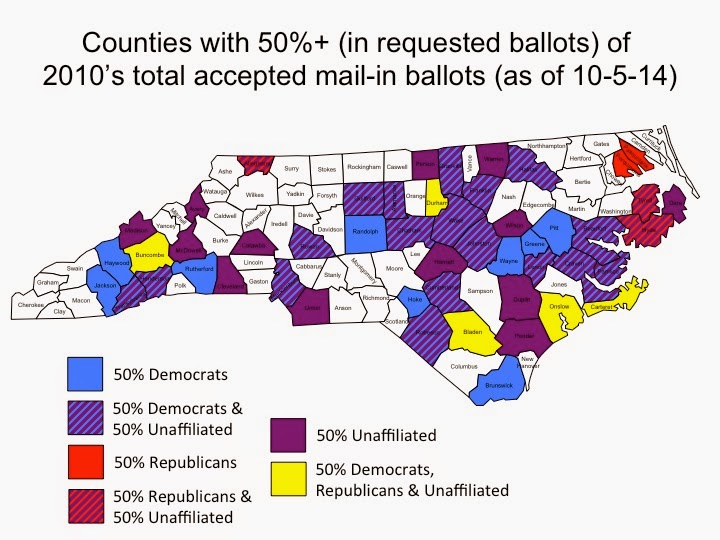 Granted, not all requested ballots will be returned and accepted, but the surge in both Democratic and unaffiliated voters, in comparison to four years ago, is one of the early remarkable aspects to this year's heated electoral contest in North Carolina.

For those interested, here are the 100 North Carolina counties with their percentages of current requested mail-in absentee ballots (as of 10-5-14) to their final 2010 accepted ballot numbers: