With this past weekend's close of early, in-person voting for North Carolina's May 17 primary, we thought we'd revisit some of our thinking from last week and add in a few more data points (thanks to the great work by the N.C. State Board of Elections and the various counties with their public files) and observations (and questions) about what we might see come Tuesday's election.

First, an overview of where things ended up with North Carolinians casting early votes, and boy did they ever.

Over 570,000 ballots were cast and accepted for Tuesday's primary, marking a significant departure from what has been the norm for mid-term primary elections. If you want some details, such as demographics or congressional districts, check out our Tweet threads from Sunday here and here.

This first chart shows both presidential and mid-term election years and the number of early ballots (both absentee by mail and absentee one-stop, or in-person) cast in each year's primary election.

In 2008 and 2012, presidential primaries have typically garnered well over half-a-million ballots, while the most recent two presidential primaries have seen about three-quarters of a million ballots come before primary election day. In mid-terms, however, that level of engagement has been well off, except for this year. With over half-a-million ballots cast early in 2022's mid-term, we could be seeing another 'new day' in North Carolina primary elections.

In general elections, North Carolina voters have taken to early voting like ducks to water, but with mid-terms, they generally have waited until Election Day to cast their ballots. But since 2006's primary election, voters have started drifting more and more to early voting, as evident in this second chart.

One of the biggest questions we have is: does the onslaught of early ballots in 2022's primary indicate more engagement by primary voters, or are voters who would have shown up on Election Day simply substituting their ballot to early, and thus potentially reducing the number of ballots to come in on Tuesday?

Of course, we'll just have to wait and see what happens, but if the above trends continue to move in the overall direction, maybe 40 to perhaps 45 percent of this year's primary votes are already banked, with the remaining 55 to 60 percent on Election Day.

One clue may be found in the data of these early voters: how many voted in 2020's primary, and what was their vote method in that primary?

So we have about the same number of 2020 primary voters who voted on Election Day switch to being early voters this year, with another quarter being voters who didn't vote in 2020's primary--but could have--plus new voters.

So What Could We See For Tuesday's Turnout?

North Carolina's primary elections have been typically low-turnout affairs, with presidential primaries attracting three out of ten registered voters, while mid-terms range from 12% to 21%, with most hovering around 15%. 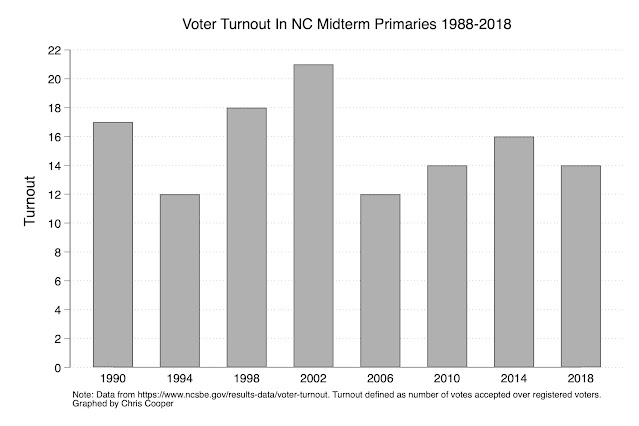 With the record number of early votes, neither one of us would be surprised if registered voter turnout falls between 16 and 20 percent.

If you take different scenarios of 15, 18, and 20 percent to the 7.2 million registered voters in the state, and take out the 570K already banked, here's what we might get for Election Day and total votes cast. 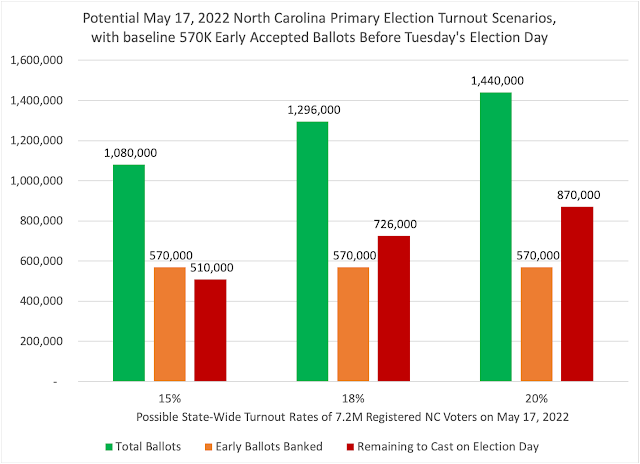 We could imagine different scenarios that lead to the same basic conclusions: one is that if we see 15 percent voter turnout, that would mean that 53 percent of the votes came in before Election Day, something that would be a significant shift from the trend noted above (going from 36% early ballots in 2020's presidential primary to over half early ballots this year). Possible, but unlikely.

If we see two out of ten registered voters ultimately cast ballots, then that would make about 40 percent of the total votes cast came early, with 60 percent (870K) coming in Tuesday. Again, potentially more in line with the trends noted in the chart above, and an impressive showing for a midterm. Of course, "impressive" is in the eye of the beholder: two out of ten voters may not sound impressive, but when compared to 15 percent, it is.

What About the Unaffiliated?

The secret is out that Unaffiliated voters are the largest group of registered voters in North Carolina. So, what clues can the early voting data give us about this critical group of voters? Unaffiliated voters are responsible for more than one in every four votes cast thus far in North Carolina. While this is lower than Democrats (40% of votes) and Republicans (33% of votes), it is nonetheless a large voting bloc and, critically, one that can choose which primary they want to participate in. 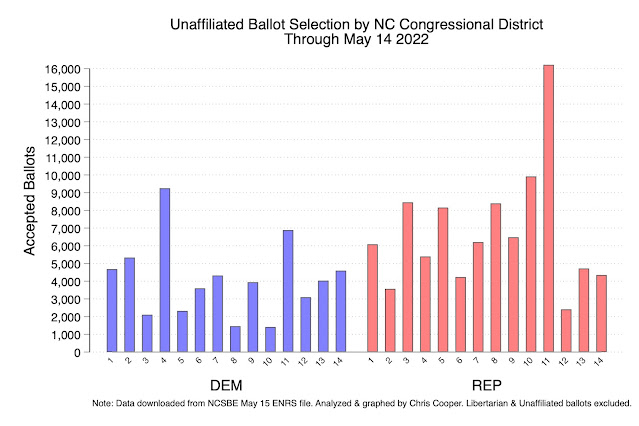 Until we get the final data from the county and state canvassing process, we won't be able to answer a lot of important questions, such as:

In the end, these data can tell us a lot about the ways North Carolinians are practicing their civic duty thus far in this election cycle, but they don't tell us much about the ultimate outcome of the election, or even what the final turnout numbers will look like. For that, we'll have to wait until after the votes are counted.

Chris Cooper is the Madison Distinguished Professor of Political Science and Public Affairs at Western Carolina University. He tweets at @chriscooperwcu.

Michael Bitzer holds the Leonard Chair of Political Science and is a professor of politics and history at Catawba College. He tweets at @BowTiePolitics.