NC Registered Voter Pool Hits 7 Million: Who Are They? And Who Has Registered Since 2016?

This past week, North Carolina's voter registration pool hit 7 million (7,003,881 to be exact), which includes active, inactive, and temporary registered voter records. As we hit the half-way point of 2020, I'll take a look at who these 7 million voters are, based on a number of characteristics that are contained in the voter registration data file, along with who has registered since the last presidential election year of 2016 and since the beginning of the year.

As a reminder: the North Carolina State Board of Elections updates the data file of all registered voters every Saturday, with the data records found here. In the files are voters who are classified as "removed" or denied (approximately 976,000); they are not included in this analysis.

Voters by Race and Ethnicity:

In looking at the racial and ethnic demographics of North Carolina voters, I decided to merge the two classifications and analyzed the voters in that fashion: meaning, I separated out "Hispanic/Latino" voters into their own category (of which they could be any racial category), while making all races "non-Hispanic/Latino," if the voter indicated, combined with "no response." 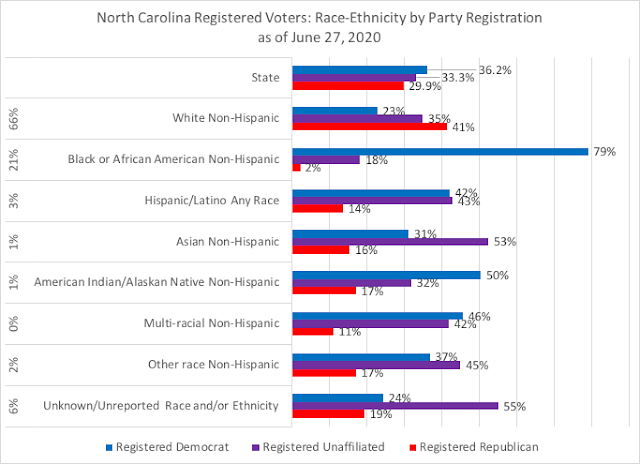 Half-way through 2020, and with four months to go before November, two-thirds of the 7 million registered voters classified themselves as white, non-Hispanic, while black or African American/non-Hispanic voters are 21 percent. Hispanic/Latino voters are 3 percent, with each of the other racial categories at two percent or less. The percentage of voters who did not identify either their race or ethnicity is six percent, and that category is growing, especially among younger voters.

Among Hispanic/Latino voters, a nearly even divided between registered unaffiliated and Democrats (at 43 and 42 percent, respectively) leaves registered Republicans at 14 percent. All other races and the 'unknowns' see a combination plurality of registered Democratic and unaffiliated as well.

Among the state's 7 million registered voters, those who are under the age of 40 (Millennials and Generation Z cohorts) constitute 37 percent of the voter pool, with Boomers at 30 percent and Generation X at 25 percent. The dynamic of "growing unaffiliated" amongst the younger generations has not abated, but has continued to grow.

As to single generation cohorts, Boomers are the plurality, with Millennials at 27 percent and Gen Z at 10 percent. 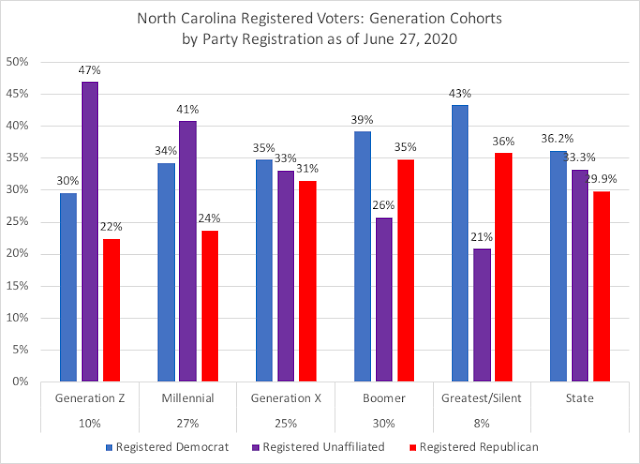 Nearly half of Gen Z voters (those under the age of 23) are registering as unaffiliated, with 30 percent going Democratic and 22 percent aligning with the GOP. Generation X is the most reflective of the state-wide pool, while the percentage of unaffiliated voters significantly decrease amongst older voters.

Among the four regions that I use as classifications--central city urban voters, urban suburbs, surrounding suburban counties, and rural counties--urban areas continue their domination of the state voter pool, with 55 percent of the registered voters living in an urban county.

Nonetheless, there are discrete differences within those urban areas, namely the central cities versus the suburbs within that urban county. 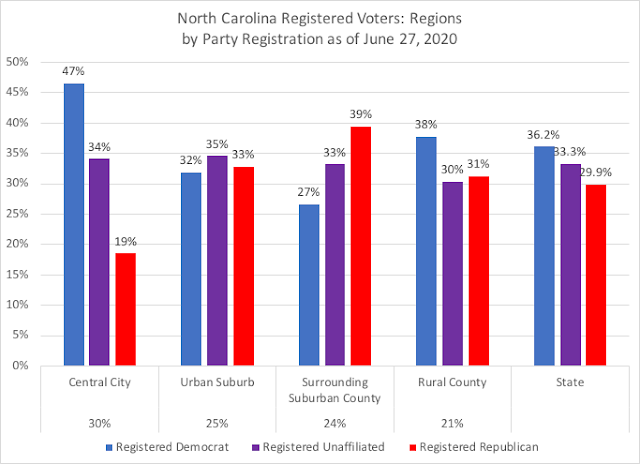 In terms of partisan registration, central cities reflect the Democratic dominance that has become the national and state-wide trend, with less than 20 percent of city voters registering with the Republican Party. Within the urban suburbs, however, registered unaffiliated voters are growing and reflect the battleground status that is likely that region in elections. The surrounding suburban counties tend to be the most Republican areas of the state, with nearly 40 percent of registered voters aligning the GOP. North Carolina's rural counties seem to be at a Democratic advantage, but careful consideration of this trend is important to note: with significant populations of voters of color (both black/African-American and American Indian) and an older, but phasing out, generation of white registered Democrats who are (in all likelihood) Republican voters, one needs to take this region's pattern of party registration under careful consideration.

Finally, the gender gap is evident in the voter party registrations. 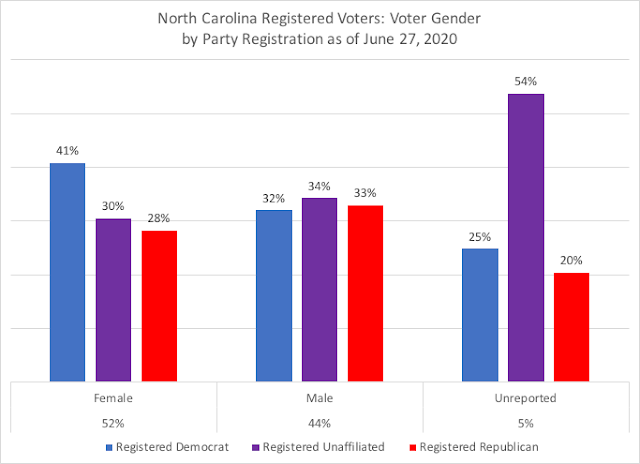 
I decided to isolate the voters who had registered since the last presidential election in 2016 and look at these same analyses for this group of voters, which numbers slightly over 1.6 million of the 7 million total. 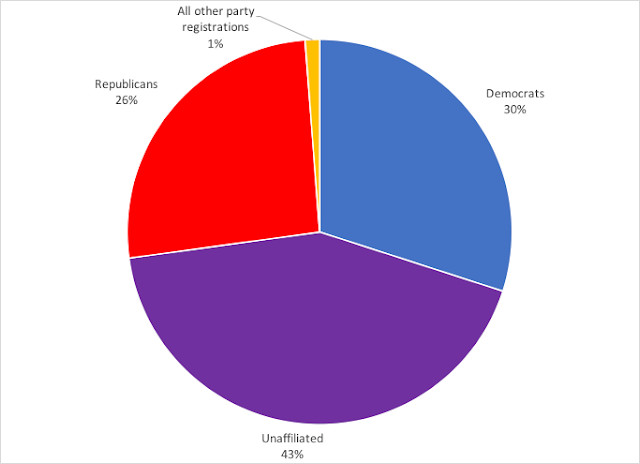 Amongst the racial and ethnic classifications, 56 percent of the past three years of new voters in North Carolina classified themselves as white, non-Hispanic, while 16 percent did not respond to one or both of the classifications. 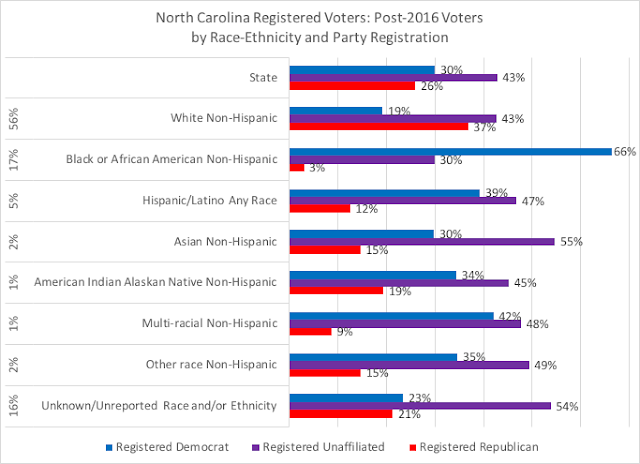 Five percent of post-2016 new voters identified as Hispanic/Latino, while 17 percent are black or African-American/non-Hispanic.

Among the other racial categories, Republicans garnered only 21 percent among 'unknowns', while Democratic and unaffiliated voters predominated among the other voters of color.

Within the generational cohorts, over 60 percent of the post-2016 voters are either Millennials or Generation Z, with nearly half of the Gen Z cohort registering unaffiliated. 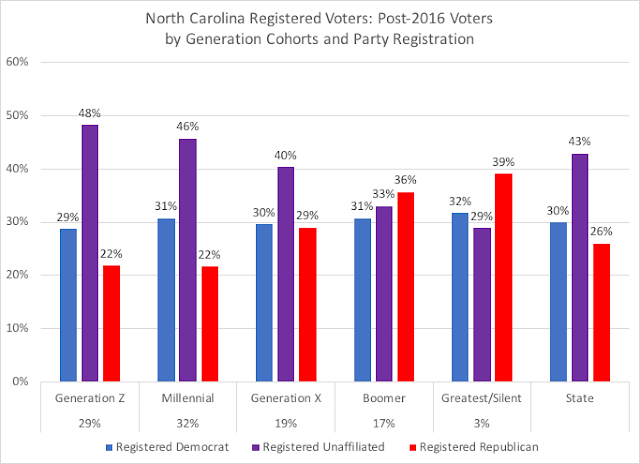 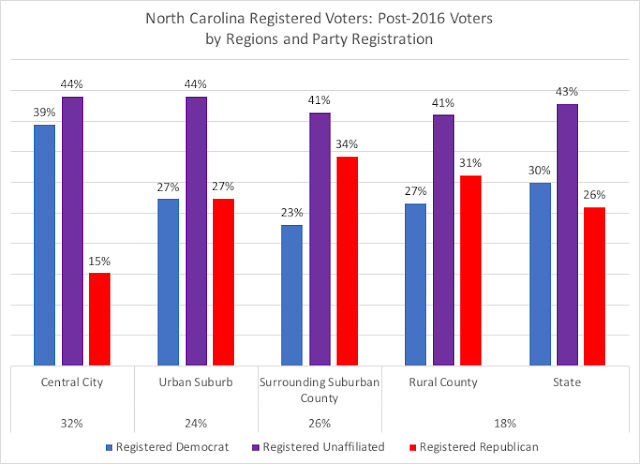 Half of the post-2016 registrants were in the suburbs (either urban or surrounding counties), but over forty percent of each were going unaffiliated, as were those in rural counties.

As a final set of analyses, I decided to break gender into female and male categories and look at each within generational cohorts and party registrations. 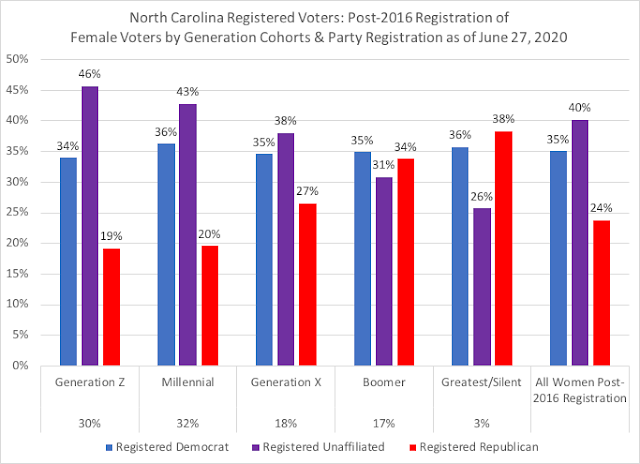 And while younger post-2016 women saw only one-in-five registered Republican, younger men who registered after the last presidential election were almost evenly divided in their partisan registration. 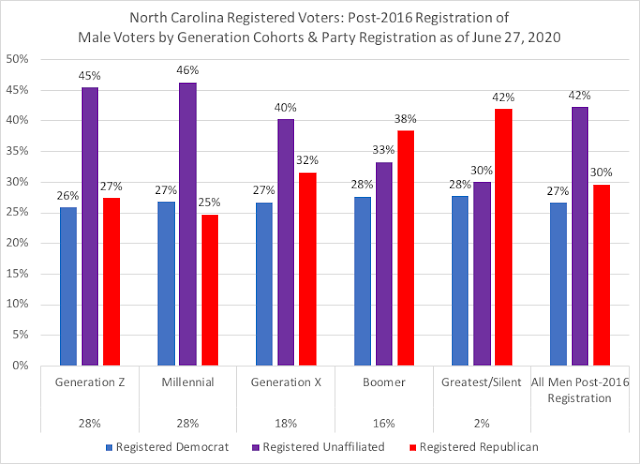 
Considering the mid-March arrival of the COVID-19 pandemic and the 'stay-at-home' orders, voter registrations in March, April, and May took an expected hit in the numbers of new voters this year. 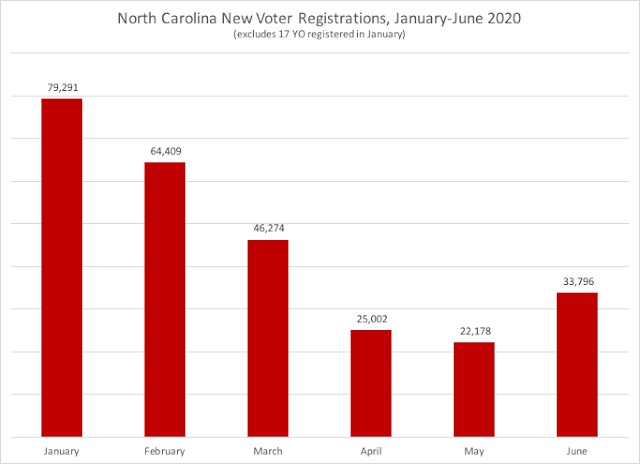 As is the usual pattern following a primary election, voter registrations tend to drop off, but 2020's numbers are below those in 2016 and even in 2018 (for April and May). 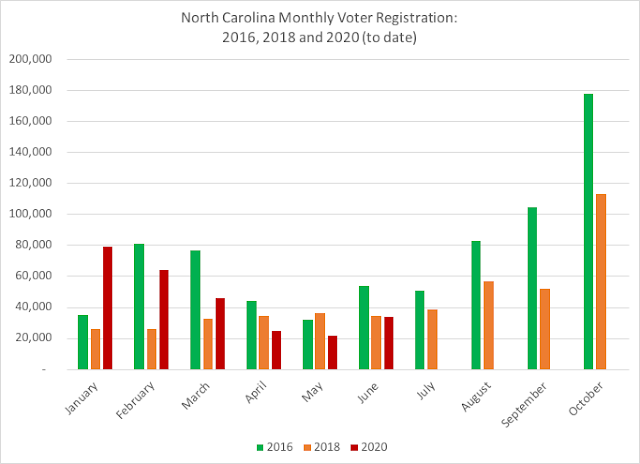 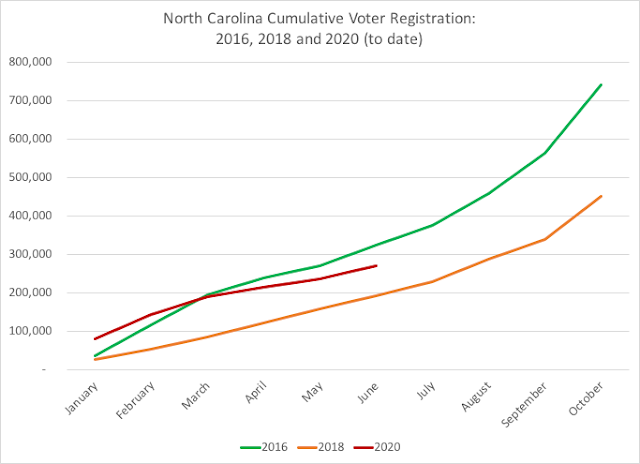 The impact of COVID-19, and its possible resurgence in the fall (or perhaps the continuation of the first wave), is something that nobody can predict at this point in the campaign cycle. But with only four months before Election Day, the voter pool could be solidified in the next few weeks, barring a significant push by the campaigns and eligible voters to register for the general election through things like online registration and the COVID spread dissipating between now and mid-October.

That will likely shift the attention of the campaigns to registered voter mobilization and turnout, rather than on registration. And with 7 million potential voters, if 2020 reaches or slightly exceeds 2016's registered voter turnout of 69 percent, we could see potentially 5 million ballots cast come this November.

Dr. Michael Bitzer is the Leonard Chair of Political Science and professor of politics and history at Catawba College. He tweets at @bowtiepolitics.
By OldNorthStatePolitics.com - June 29, 2020