What effects might the "Great Cessation" have on North Carolina's counties?

“Doggone scary” and “grim” are two ways one state lawmaker has described North Carolina’s state budget outlook after learning that we’re looking at a $4 billion shortfall during the next two years due to the economic impacts of Covid-19. The state budget director has also said North Carolina will experience a recession soon, if it isn’t already here.

But what about county budgets? After all, these local governments have arguably been even harder hit than the state, given that counties run many of the hospitals that care for Covid-19 patients and administer many of the state’s welfare programs that help families get through business closures and unemployment. Since counties run elections, too, they’ve been doing all this while trying to administer the upcoming 2020 election cycle; no small feat in a “normal” year, it’s been a nightmare trying to safely conduct representative democracy in the midst of a pandemic.

Luckily, I have a dataset that covers all 100 North Carolina counties from 2006-2018 and I can calculate what we might expect regarding county budgets by looking at what happened from 2009-2011, the years directly following the Great Recession. Because budgets are generally decided one year in advance, we must begin our analysis one year past the start of the Great Recession (some say it began in December 2007, but we’re going to just go with 2008 as the starting year).

Looking at all North Carolina counties together, from 2009 to 2010, 70% of counties experienced a decrease in their budget. Half of those were double-digit decreases. The largest cuts were experienced by Durham County, which cut its budget from the 2008-2009 fiscal year by a shocking 40%, and Iredell County, which cut its budget by 35%. This is all the more striking considering that Durham County grew by over 5,500 people in that time, and Iredell County grew by 2,300 people. So, at the same time that these counties were experiencing rapid expansion in the number of residents they need to serve, they were also drastically cutting services.

I decided to take a closer look at Durham County, since this was the county hardest hit by the Great Recession. The following chart shows the dramatic cuts to health and human services spending in Durham. Even more striking is that this spending has never been restored- it’s as though post-recession Durham is operating under a new normal in this area, despite the fact that all other areas of Durham’s spending have returned to their previous levels (and, in the case of public safety spending, increased by 50%).

By request, I have updated the post to include Wake County's budget by spending type. Like Durham and Mecklenburg, education spending was hit hard- cut 29% between 2009 and 2010. However, education spending has bounced back (and then some) since. Unlike Durham and Mecklenburg, health and human services spending has not experienced huge cuts in any one year; it's been more slowly chipping away over time, losing an average of 6% each successive year. 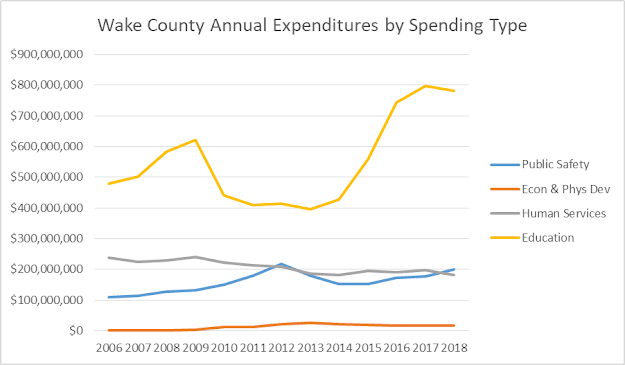 So what can we expect from the coming economic downturn? We will likely see most counties reduce their budgets, as we saw in 2010. Given the extreme volatility on Wall Street during the pandemic, with the Dow Jones experiencing its highest drop ever in March, some believe the “Great Cessation” may even end up worse than the Great Recession. Based on what happened in 2010, this is bad news for education and health and human services spending. While schools may actually be saving a little money during the pandemic, though (through less lighting, heating, cooling, etc.), health and human services is by necessity experiencing very high demand. Add to this the fact that since 2010 the North Carolina population has increasingly shifted away from rural areas and toward urban areas, and our largest counties are set up to struggle quite a bit for the next decade, if not longer.

*This chart and its accompanying analysis have been updated to correct for a data entry error. I apologize for any confusion.