Where the NC Voter Pool Stands Halfway Through 2019

When breaking down different factors based on party registration, there continues some intriguing patterns to the voter pool.

Within NC's voter pool, white voters make up 68 percent, with Black/African-Americans at 22 percent and all other races (Asian, Native Indian, Multi-racial, and other races) at 10 percent.

The party breakdowns by each racial category is: 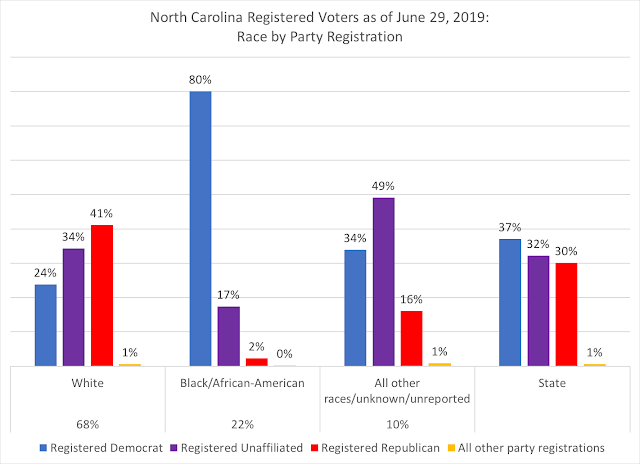 Within the party registrations, registered Democrats are a majority-minority party: 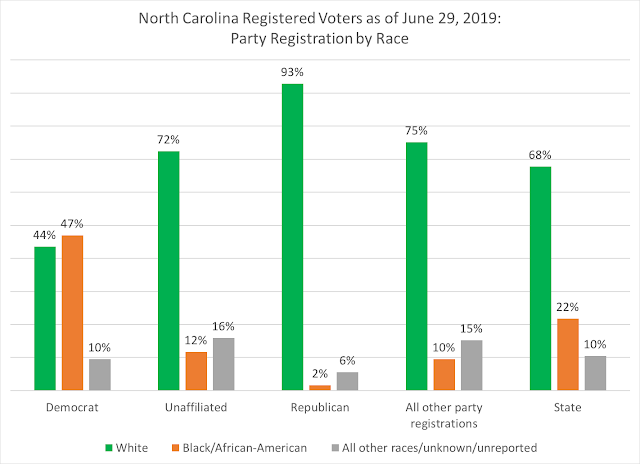 Not surprisingly, registered Republicans are 93 percent white, while unaffiliated registered voters are slightly more white than the state breakdown.


Within gender, women make up 52 percent of the state's voters: 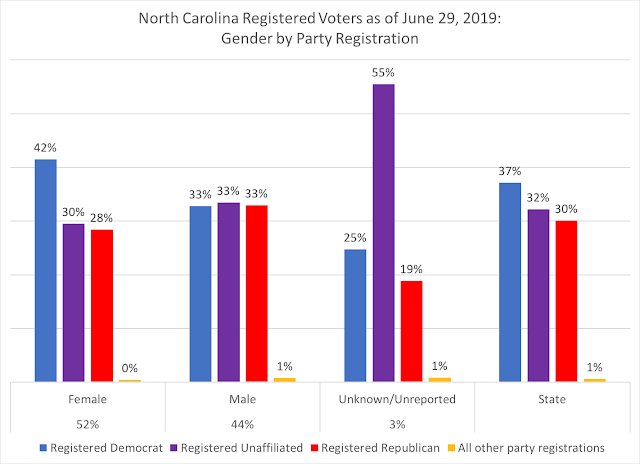 
Hispanic/Latino voters are 3 percent, or a little under 200,000 out of the 6.6 million registered voters, and are either registered Democrats or unaffiliated: 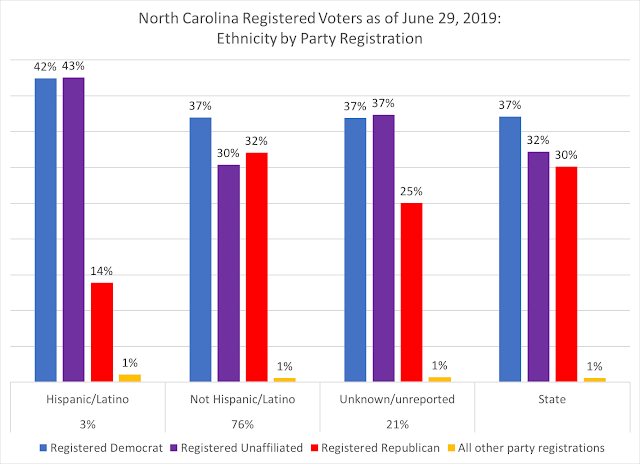 Among the party registrations, both registered Democrats and unaffiliated show that influence, though the number of voters who did not report or decided not to answer the ethnicity question on the voter registration form may influence the overall distribution. 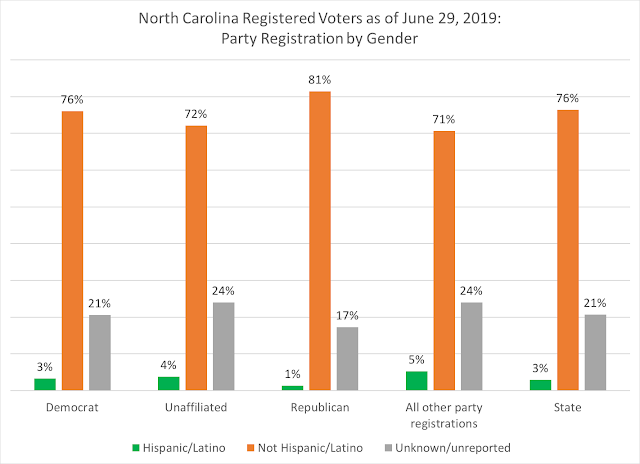 The generational-party registration pattern has continued, with younger voters selected "unaffiliated" more than the party registrations. Generation Z is inching close to nearly half of them selecting neither party, while 30 percent are registering Democratic and 22 percent Republican. 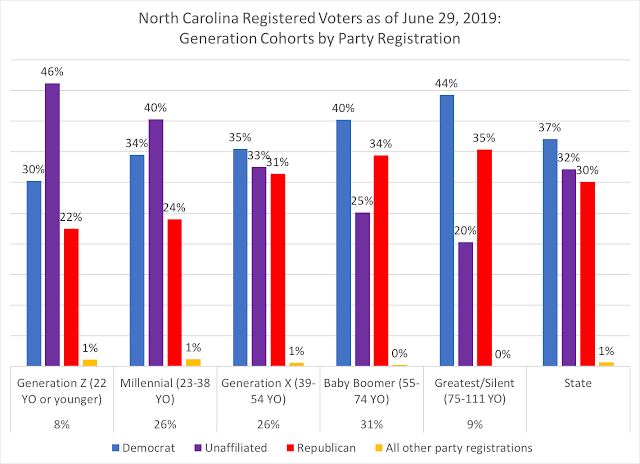 Among the party registrations, 44 percent of unaffiliated voters (again, nearly one-third of the 6.6 million registered) are Millennials or Generation Z, while 31 percent of registered Democrats are under the age of 38 and 27 percent of Republicans are among the two youngest generational cohorts. 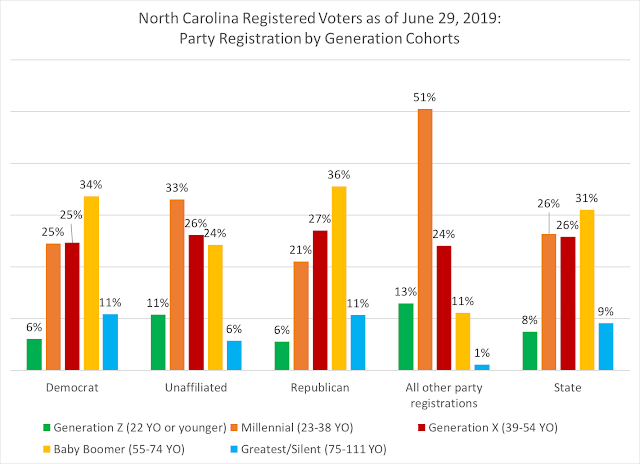 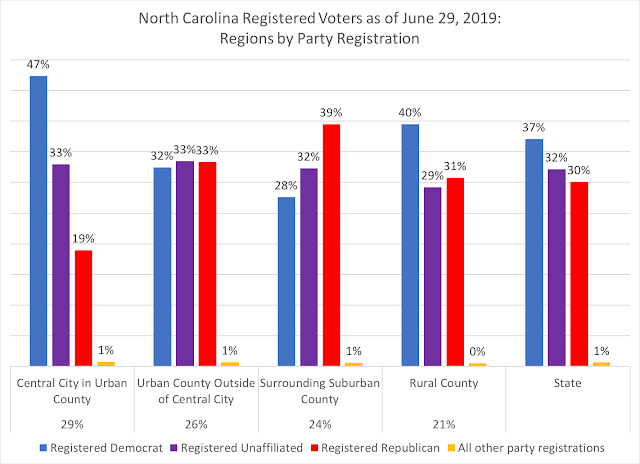 Among the parties, the regional compositions show an important facet to the politics of the state: 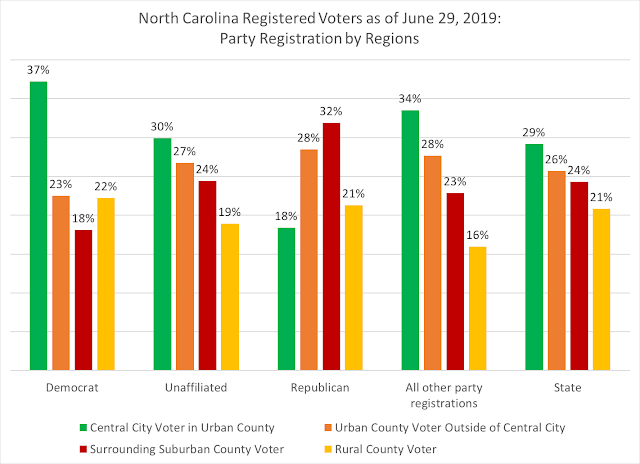 
I decided to explore the voter registration data by some other combinations, first with generations and race. As the country demographics continue to diversify, North Carolina's voter pool reflects that dynamic as well: 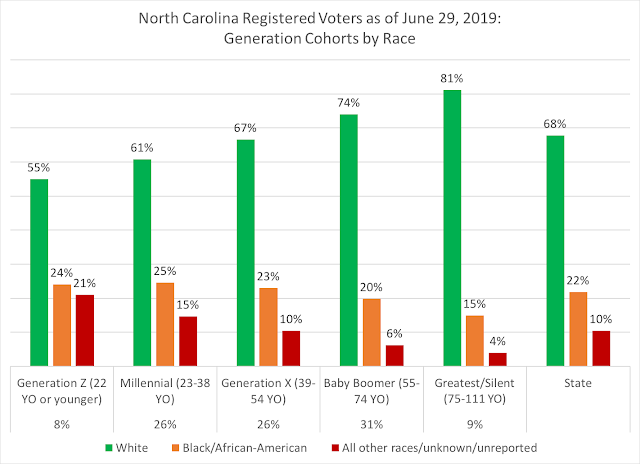 Generation X, those between the ages of 39-54, appear as the "bridge" between older and younger voters, by reflecting the state's percentages as a whole. Younger voters, especially the emerging Generation Z, are less white, while at least three-quarters of older voters are white. This dynamic also plays out when looking within the racial categories and the generation distributions: 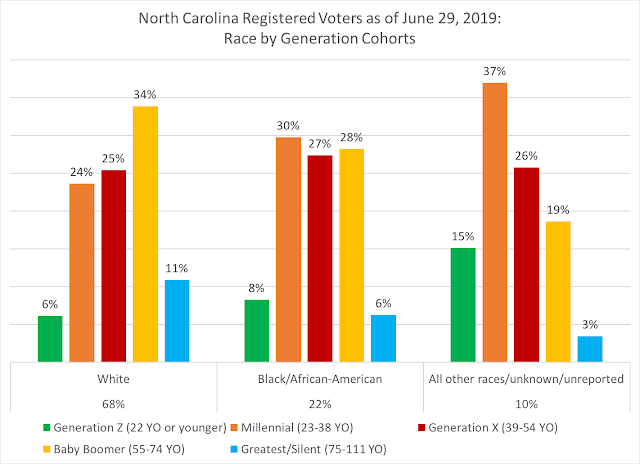 With 42 percent of voters of color under the age of 38, the generational replacement will continue to shift the potential NC electorate towards a less-white voter pool.


Next I looked at the intersections of regions and generations, thanks in part to this Wall Street Journal article about Millennials now moving to the suburbs.

Among North Carolina registered Millennials, 38 percent of them are in central cities, while only 20 percent are in surrounding suburban counties. Generation Z, in comparison, have only a third in the central cities, and more distributed in the other three regions. 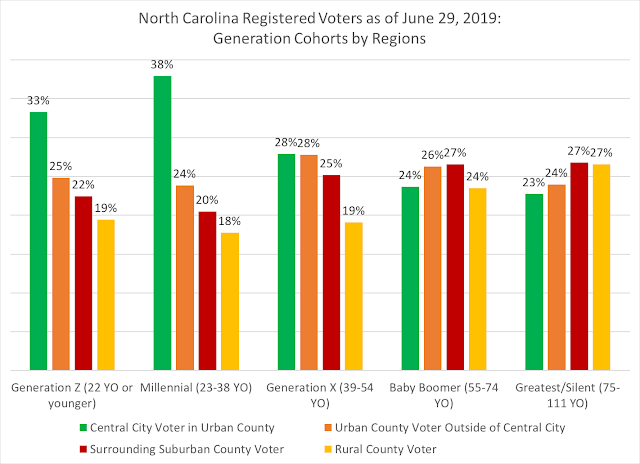 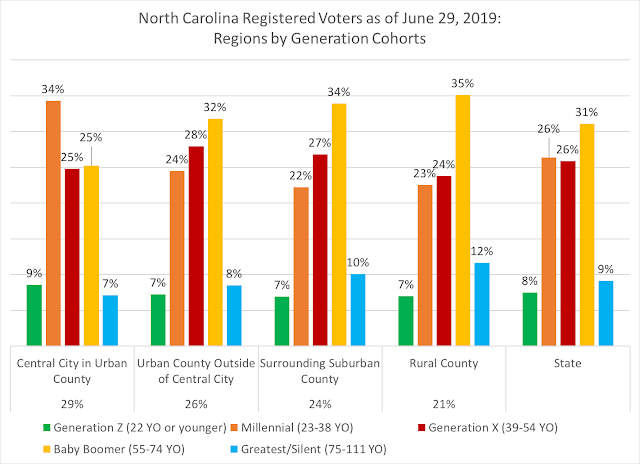 For suburban areas of the state (both within an urban county but outside the central city, along with the surrounding counties), Baby Boomers are one-third of all registered voters.

Nearly half of registered voters in rural counties (47 percent) are over the age of 55 years.

Finally I looked at the new registered voters since 2016's presidential election for each month over the past two and half years by generational cohorts: 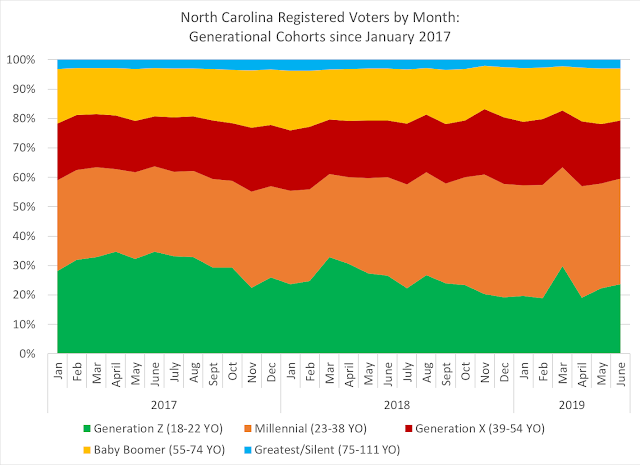 As we enter the second half of 2019 and watch the numbers of new registrants, the question becomes how much more diversification with the potential North Carolina electorate will we see, along with seeing if the potential electorate reaches 7 million registered voters. Expectations are that the 2020 election will see considerable interest, and if 2018's mid-term election (with 53 percent registered voter turnout) is any indication, new records may be set for the Old North State's electorate come November 2020.
By OldNorthStatePolitics.com - July 02, 2019