A Review of "The Long Southern Strategy"

Occasionally I have the opportunity to guest host WFAE's Charlotte Talks and interview some really fascinating people about a politics. Most recently, I interviewed Rob Christensen, former political reporter and columnist for the Raleigh News & Observer on his new book about North Carolina's Scott Family dynasty and the state's era of progressive politics, as well as former North Carolina attorney general, secretary of state, and 1984 Democratic gubernatorial candidate Rufus Edminsten on his new book.

This week I'm interviewing Drs. Angie Maxwell and Todd Shields of the University of Arkansas on their new book, "The Long Southern Strategy: How Chasing White Voters in the South Changed American Politics." 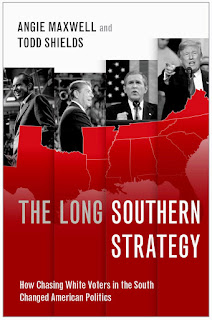 It is a deeply rich and extensive study of how the American South transformed from a deep blue, Solid Democratic region to now a Solid Republican South (albeit some states deeper in their red hues than others).

As someone who observes, teaches, and studies North Carolina politics, South Carolina politics, and Southern politics in general, this book provides a comprehensive analysis of not just how the region of the Old Confederacy transformed political, but what factors drove that transformation. For many historians and political scientists, the "Southern Strategy" was driven by Richard Nixon and Strom Thurmond in the 1968 and 1972 presidential contests, designed to realign the Democratic South, that was breaking away from its national party moorings, into a Republican South.

But Maxwell and Shields identify a 'longer' perspective about this strategy, one that I have taught extends back to the "unholy alliance" of FDR's New Deal Democratic Party, a party that became the majority party in the nation, thanks to the foundation of the Democratic Solid South. But this New Deal party had factions within it that would eventually make it 'unholy' and untenable for duration, namely Northern liberals, members of the Jewish and Catholic faiths, the evolution and growing power of black voting power in the Northeast and Midwest, all housed within a party that was previously dominated by white, conservative Southern Democrats, who espoused and sought to uphold their segregationist society.

The first public and major eruption in this coalition was following FDR's death and Harry Truman's ascension to the presidency and his re-election bid in 1948. As told in "The Dixiecrat Revolt and the End of the Solid South," the fissure came out in the open when the Democratic mayor of Minneapolis stood before his party's 1948 convention and proclaimed that it was time for

"the Democratic Party to get out of the shadow of states' rights and to walk forthrightly into the bright sunshine of human rights..."

This speech prompted some deep South Democrats to literally walk out of the convention and form their own presidential party and ticket, the Dixiecrats headed by then Governor Strom Thurmond of South Carolina. That same speaker who promoted civil rights as a Democratic party platform and Southern walkout would go on to be the party's presidential candidate in 1968: Hubert Humphrey.

Maxwell and Shields focus their attention on the events of the 1964 presidential campaign and the candidacy of Barry Goldwater, the conservative Republican whose forces won over the GOP and lead to the Johnson presidential landslide victory. But Goldwater's stunning defeat heralded in the rise of the Republican South, along with Thurmond's 1964 party switch and eventual take over of the South Carolina Republican Party (something I documented in my master's thesis).

As the authors note, the transformation to a Republican South was often two steps forward, one step back. But their key aspect to understand this long Southern Strategy is based on three critical factors: race, especially the cultivation by the Republican Party of southern whiteness, gender and the feminist backlash, and religion, or more importantly, the rise of the Christian Right and evangelical Christianity.

The book takes each of these factors and presents both historical and modern data to explore and develop these themes, bringing them together as a comprehensive theory of how and why the South realigned itself to the Republican Party, and how now the Republican Party is realigned to the South's ideology. The book's focus on white southern identity and its politics will certain raise some interesting conversations, but the focus on identity politics needs a thorough discussion and understanding for today's political environment. This book pairs well with a recent study "White Identity Politics," by political scientist Ashley Jardina, along with Katherine Cramer's "The Politics of Resentment" about not just the rural dynamics of Wisconsin, but for understanding rural politics across the nation (I have used in my State & Local Politics class before and it was well received by students). Another book that I haven't had a chance to get to yet is "WhiteShift."

As a political scientist and historian, I was fascinated with, and convinced by, Maxwell and Shields' evidence and findings. For the average lay reader, a warning: there is quite a bit of data in the analysis (which lends to the credibility of their findings), but sometimes the average reader may get lost in various regression analyses. Maxwell and Shields do a good job at explaining what their data findings demonstrate, so readers should be able to get the meaning behind the number crunching.

In the end, Maxwell and Shields make a convincing case that the Southern Strategy is one that we need to view in the light of history over the long term, with multiple factors leading to where we are, not only as a political region, but as a nation in our politics.

The conversation with Angie and Todd will be Tuesday, July 2 on WFAE, which you can catch the streaming of it here or listen to the show later or via any podcast outlet.
By OldNorthStatePolitics.com - July 01, 2019