As another chapter in exploring the Old North State's 2018 mid-term election data, it appears that North Carolina isn't just experiencing a tectonic shift among generational cohorts, but also within the geography of the state.

Like the rest of the nation, North Carolina is experiencing the 'urban-rural' divide in its politics, but with some clarifications as to the division. This analysis looks at the turnout rates in four 'regions' of the Old North State: at urban county voters who live within a central city (Charlotte, Raleigh, etc.), those voters who reside outside the central city but within that same urban county, voters in the surrounding suburban counties to the urban county, and then all rural votes. This page denotes which counties are in each category, based on the U.S. Office of Management and Budget's classification.

The state's registered voter turnout was nearly 53 percent for the 2018 election, one of the highest in recent elections. But broken down within the four regions, there was an obvious suburban dynamic to the mid-term's turnout rate. 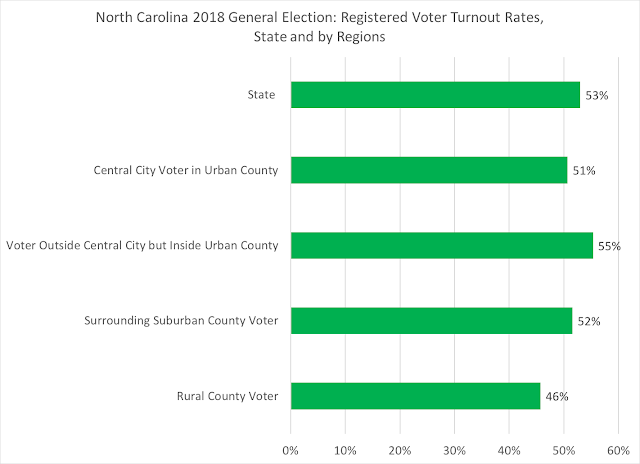 When looking at the key elections in the 2018 mid-term, that of congressional contests, the competitive races in the Fourth, Ninth, and Thirteen congressional districts drove turnout higher, with the Fourth having the highest registered voter turnout at 58 percent, followed by the Ninth and Thirteenth at 53 percent. Interestingly, the Eleventh Congressional District in the mountains garnered a registered voter turnout rate of 55 percent.

Within each congressional district, the following charts show the turnout rate among the different regions within each district: 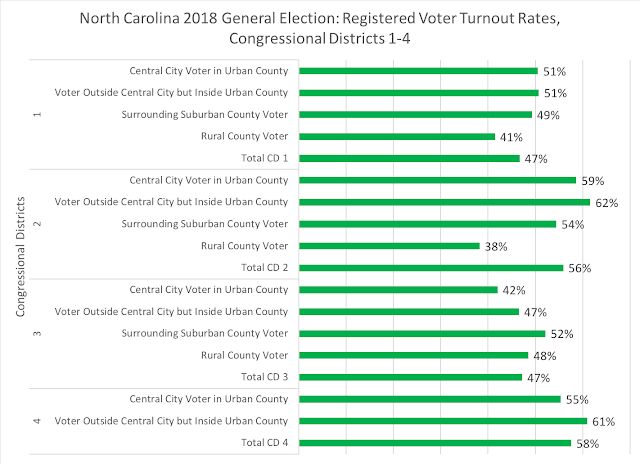 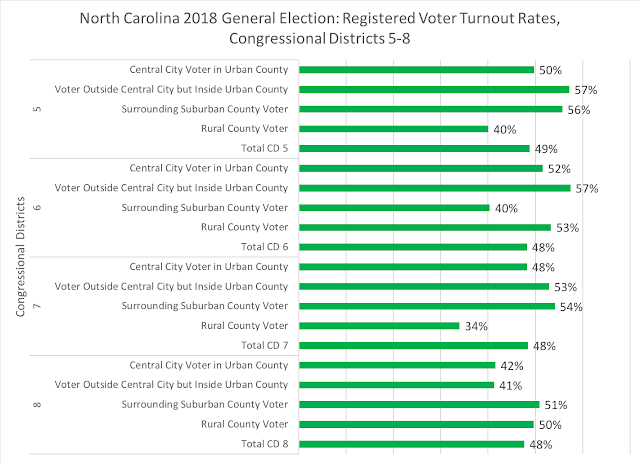 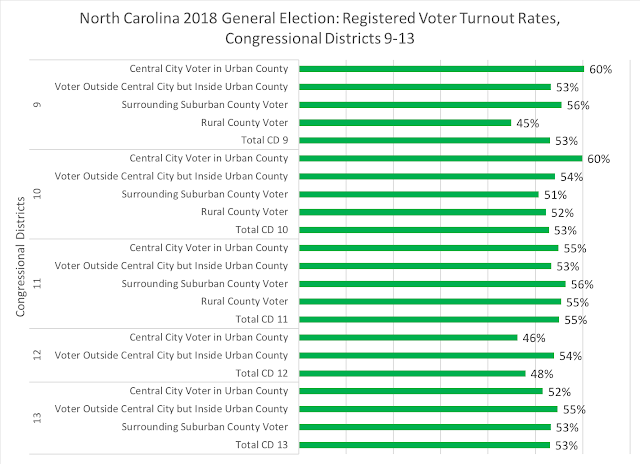 Typically, in NC mid-term elections, registered Republicans have the highest voter turnout rate among the party registrations within the voter pool, but 2018 was an exception, due to voter enthusiasm across the board: 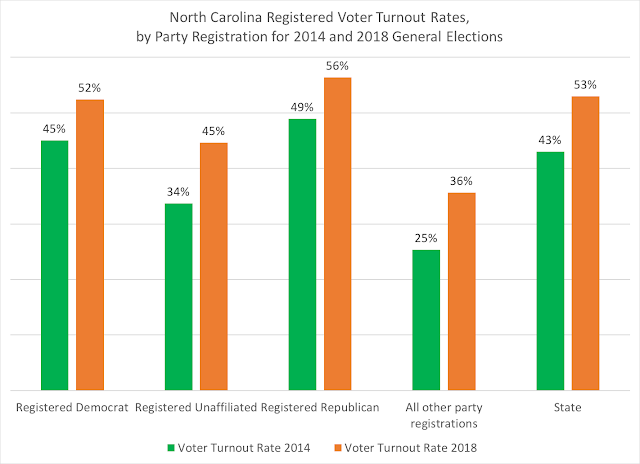 When compared to four years ago, the state turnout rate went up ten percentage points, with registered partisan (Democratic and Republican) turnout out going up 7 percentage points. But registered unaffiliated voter turnout went up 12 percentage points over the last mid-term, from a little over a third of registered voters in 2014 casting ballots to 45 percent in 2018. 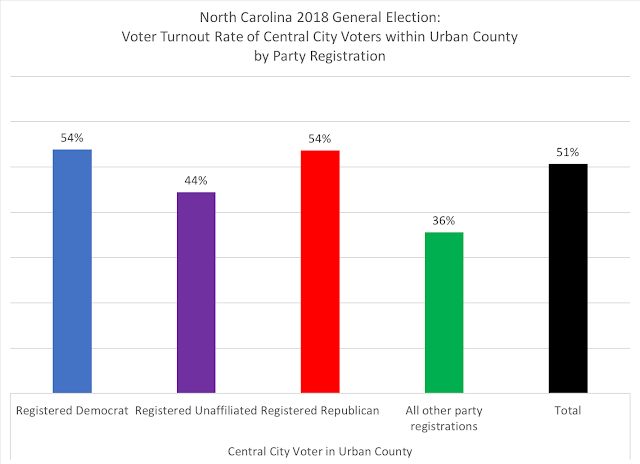 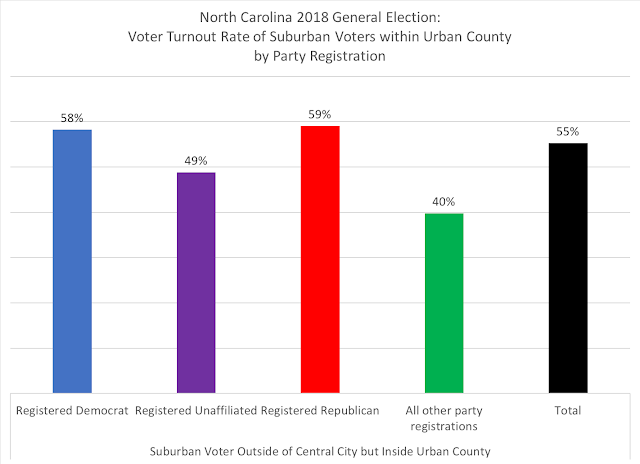 However, within surrounding suburban counties and rural counties, registered Republicans had much higher turnout rates in comparison to registered Democrats, and well over each region's overall turnout rates: 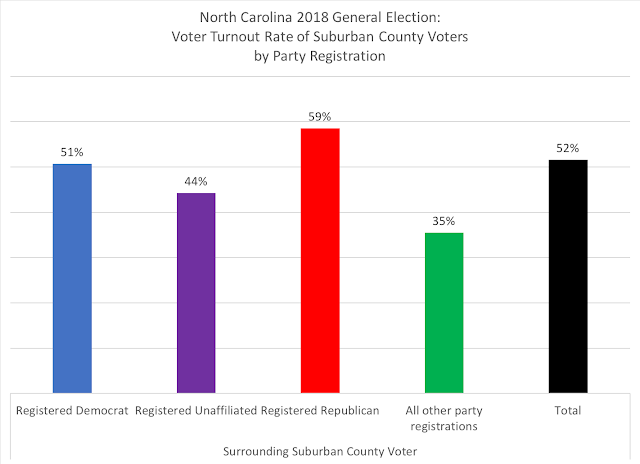 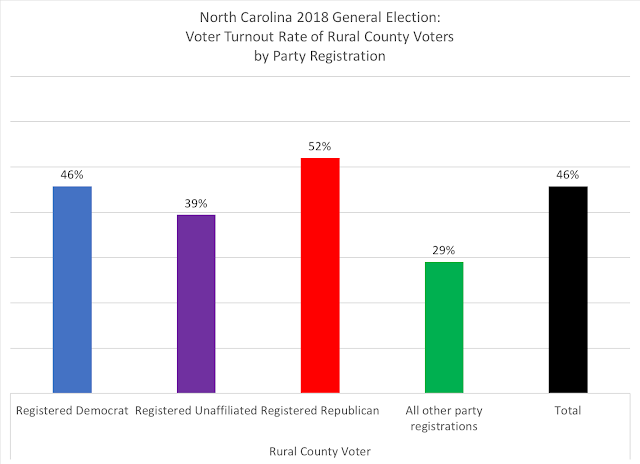 As the nation continues to see a divide between urban and rural areas, North Carolina is another prime example of this geographic polarization. Along with the generational divide, the tectonic shifts in the electorate will likely be more evident in 2020's contest, as the state continues to be a potential political battleground.
By OldNorthStatePolitics.com - May 06, 2019