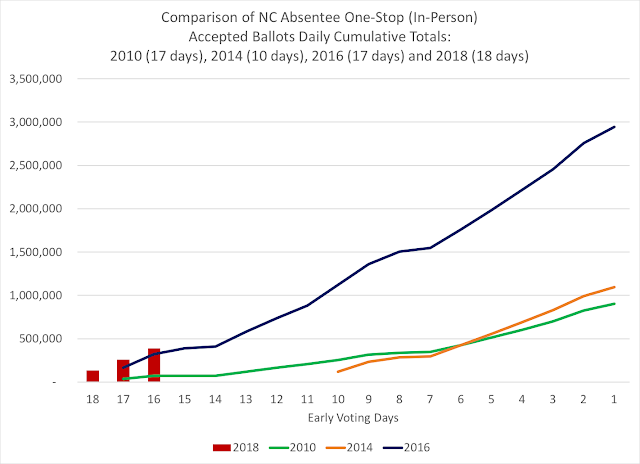 North Carolina is currently tracking at the 2016 presidential level of accepted absentee in-person ballots. Broken down by party registration of the voters who have cast early ballots so far: 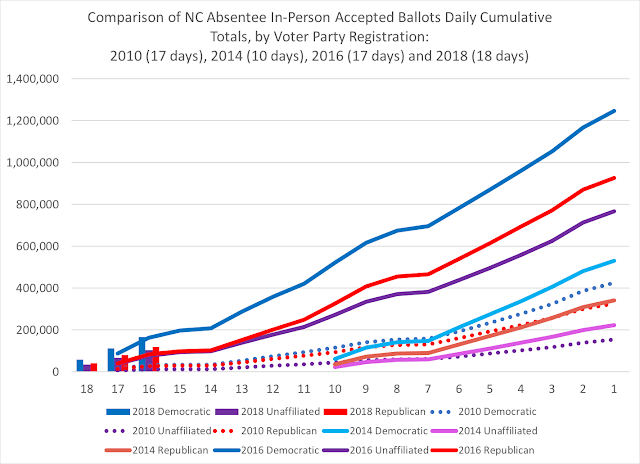 All three major party registrations--Democratic, Republican, and unaffiliated--are running ahead of where they were in 2016's early voting cycle.

I'm not sure the momentum of a presidential election trend can be sustained this year, but if so, the Old North State is heading for a record-breaking mid-term election cycle in what should be one of the lowest turnout elections in a cycle (the last 'blue-moon' election year was 2006, and saw a 36 percent registered voter turnout). 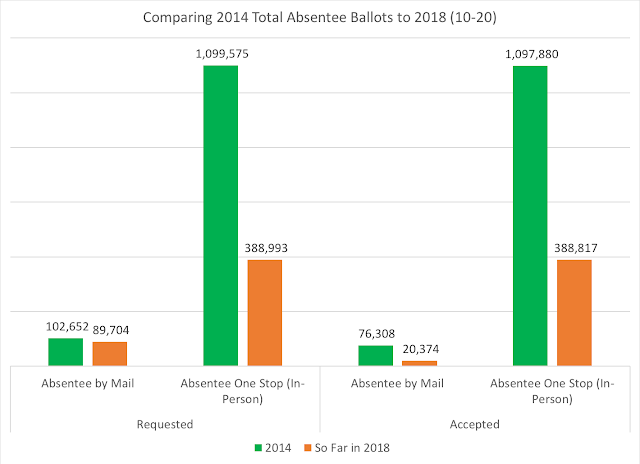 More importantly, the absentee in-person ballots requested is at 35 percent of 2014's final numbers for both requested and accepted.

Of these nearly 389,000 ballots cast and accepted so far in early voting, registered Democrats have a plurality of the ballots, followed by registered Republicans and then registered unaffiliated voters: 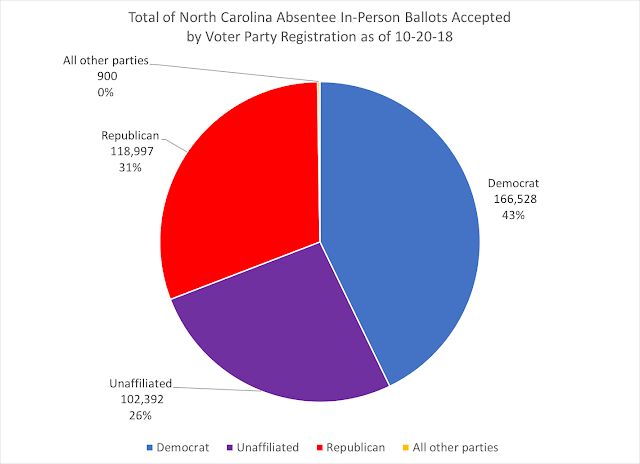 In looking at the age and generational cohorts of these early voters, the average age of voters casting absentee in-person ballots so far is 61 years old, with 71 percent of the ballots coming from Baby Boomers or the Greatest & Silent generations. A comparison of each generational cohort's percentage of the entire NC registered voter pool to the ballots cast so far shows the skew towards old voters: 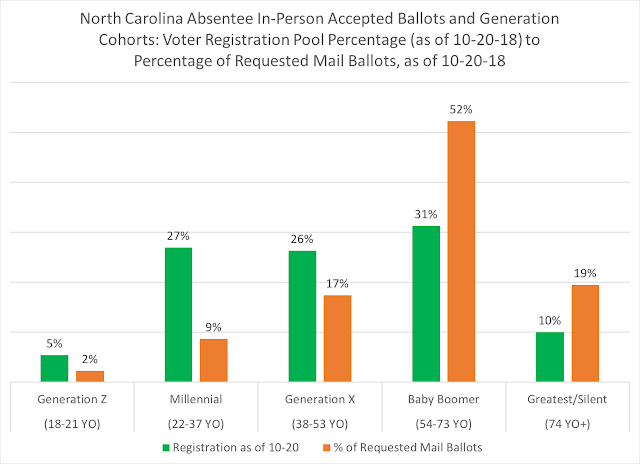 The party registration of these cohorts is: 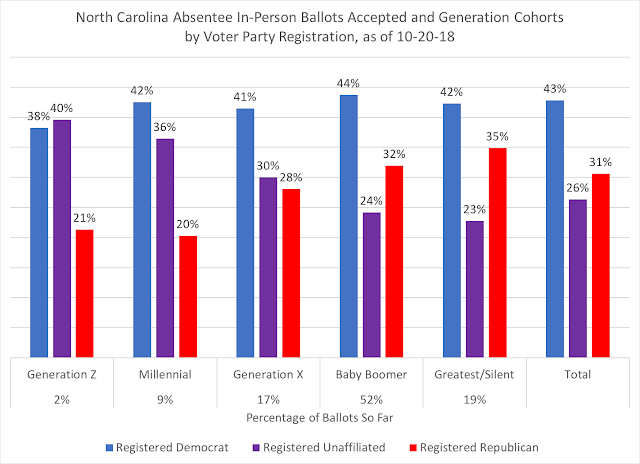 The breakdown of these votes by congressional district shows a fairly even distribution, with the 11th Congressional District (in the mountains) leading: 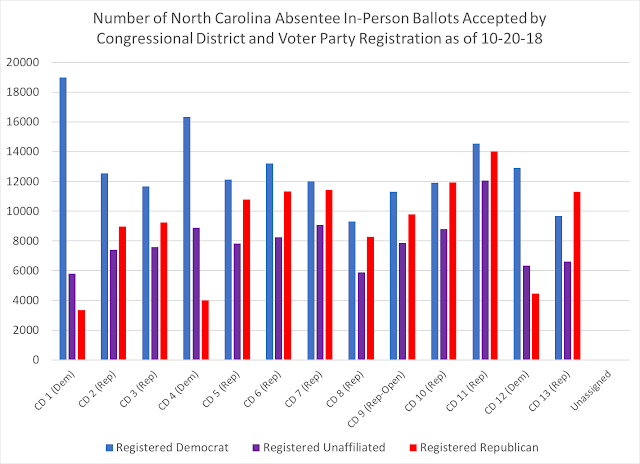 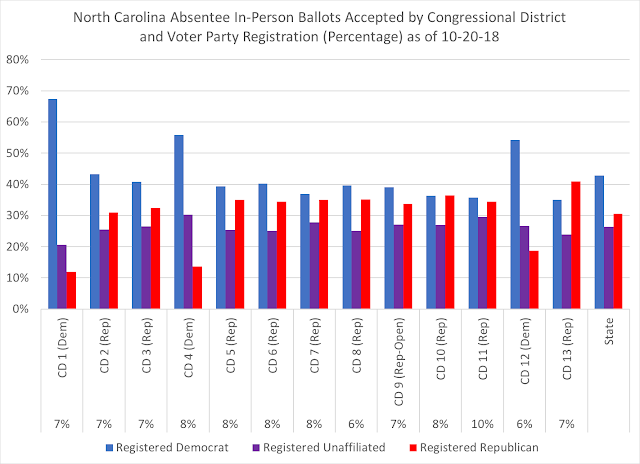 In looking at how these 2018 mid-term early voters cast ballots in the last mid-term election (or didn't): 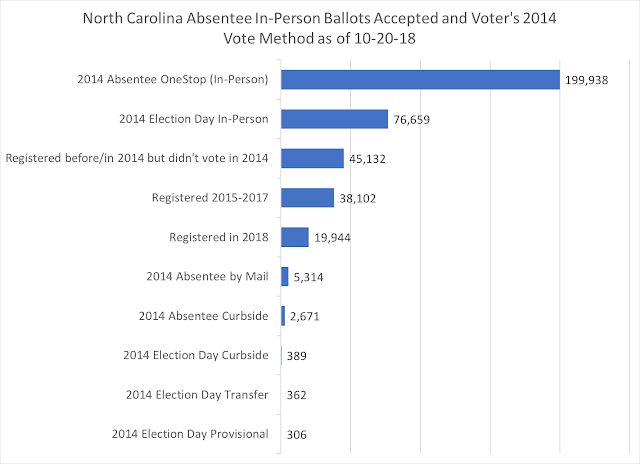 The party registration within each of these categories shows a registered Democrat advantage in all except those who voted by mail in 2014 and have voted in person this year: 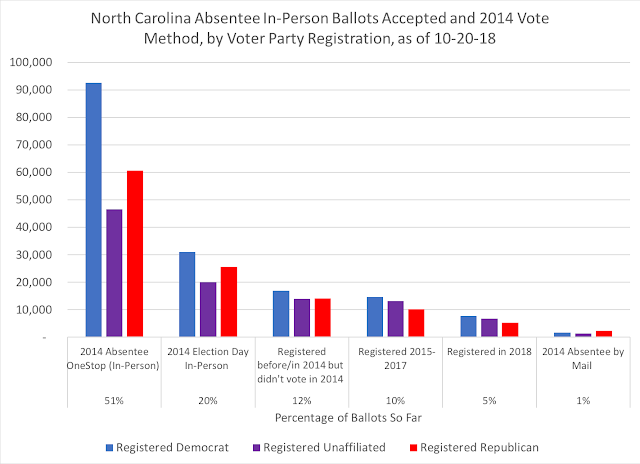 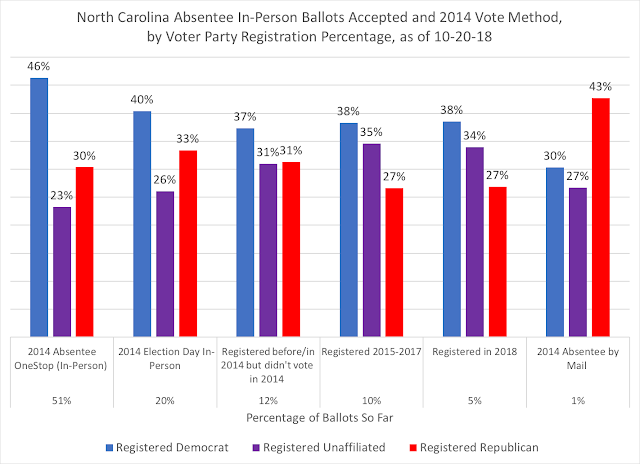 Of particular value to political operatives and campaigns are those voters who cast ballots other than in-person in 2014: 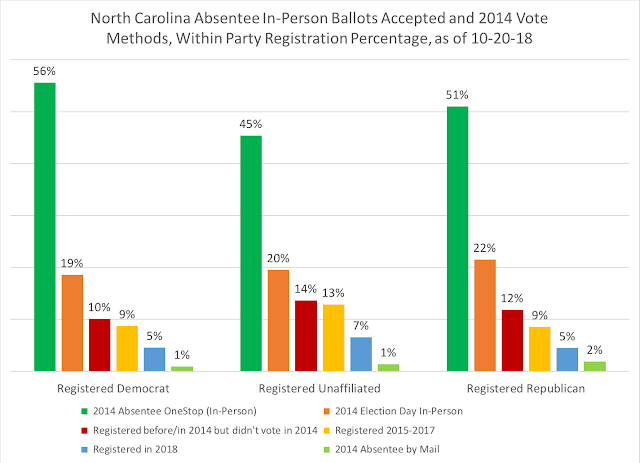 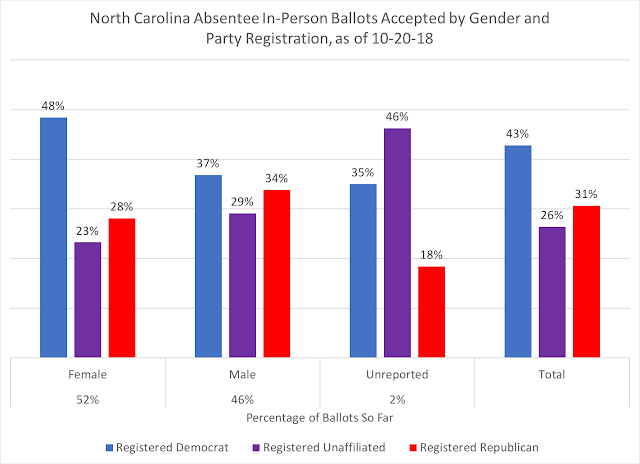 And by gender and 'region' of these voters: 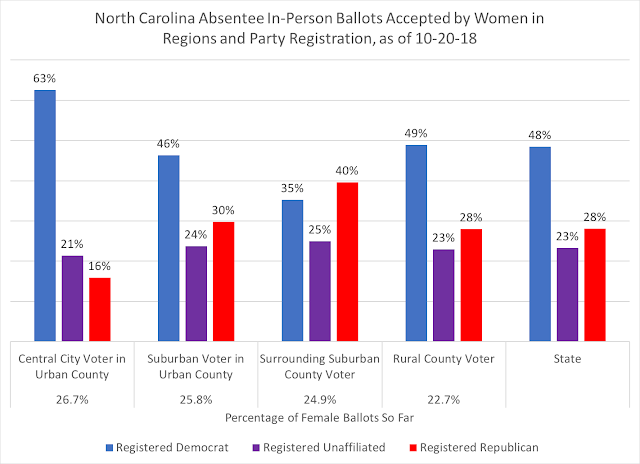 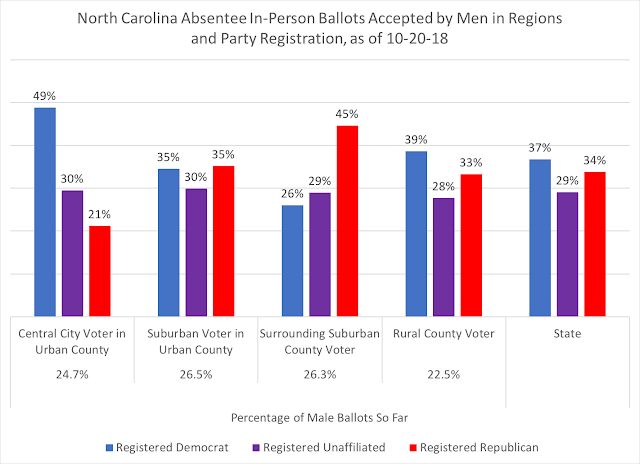 The racial categories of NC's absentee in-person voters shows that three-quarters are white: 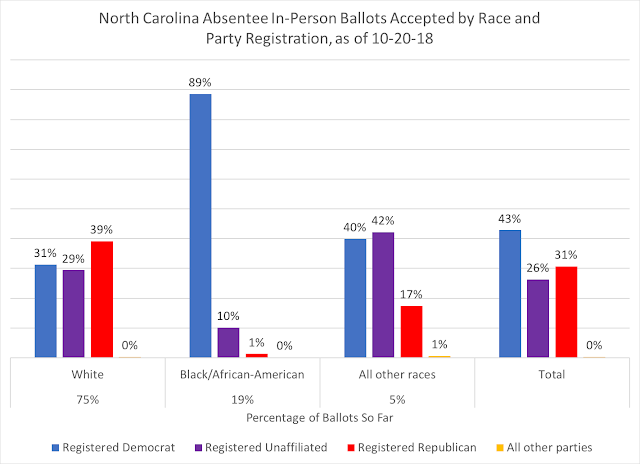 And since it's all about turnout, here are the turnout rates by voter party registrations: 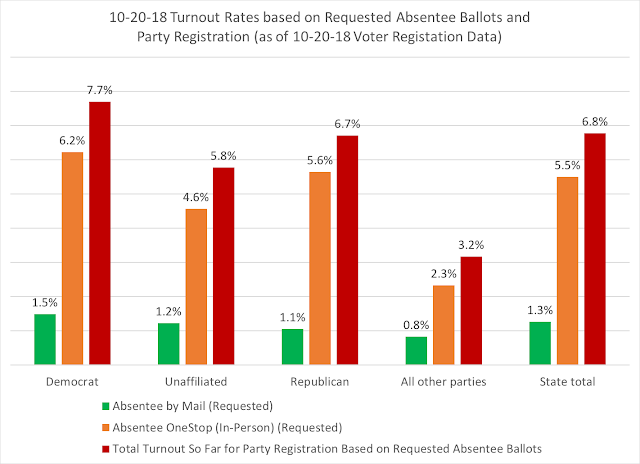 Registered Democrats have an overall higher turnout rate than registered Republicans and unaffiliated voters, but it is still very early in the process.

One new set of analyses that I did was to look at how North Carolinians have used the different voting methods (absentee by mail, absentee one-stop/in-person, and Election Day voting) and the different kinds of election years (presidential versus mid-term) to see if party registration tended to differ in which voters used which methods in different years.

The first comparative graph shows the 2018 presidential election and the 2010 mid-term election: 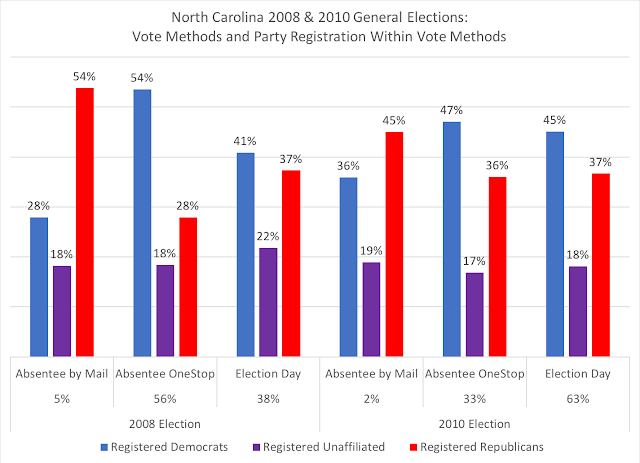 Notice that in 2008, a majority of votes came before Election Day, with registered Republicans dominating the absentee by mail while registered Democrats dominated in the absentee in-person voting method.

In 2012 and 2014, a similar pattern continues, but slightly less in certain areas: 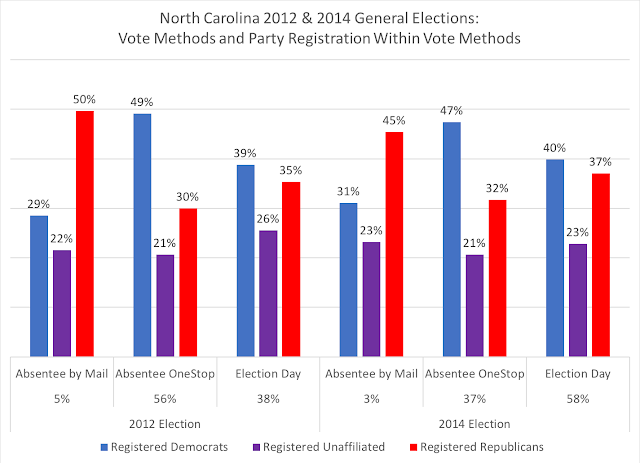 Again, a majority of votes in 2012's presidential year came before Election Day, but 2014 saw a majority on Election Day. The partisan differences between absentee by mail and absentee in-person continues to show from the previous two elections. 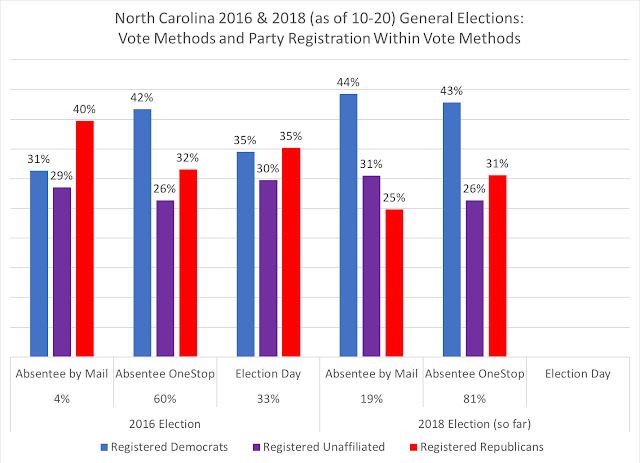