With a Week to Go Until NC's Primary Election, Where Are The Voters?

With a week to go before the May 8th primary election in the Old North State, voter turnout in early voting has been, to use a political sciencey-term, lackluster (and that's being kind).

According to the May 2nd NC State Board of Elections and Ethic Enforcement statistics, a little over 2 percent of the state's voters have requested ballots: 187,000 out of the 6.9 million registered active and inactive voters based on almost three weeks of early voting. This really isn't surprising, though, due to the fact that there is no major state-wide primary contest driving folks to the polls (thus, the 'blue-moon' election cycle that North Carolina tends to have every twelve years, with no gubernatorial (elected in presidential years) and no U.S. Senate contests).


Of the 187,000 plus voters who have requested ballots for the primary contests, the state-wide division between those voters taking the Democratic ballot versus Republican ballot breaks down to a 58 to 41 percent, respectively. But within the congressional districts, the divide between party ballots selected are more stark: 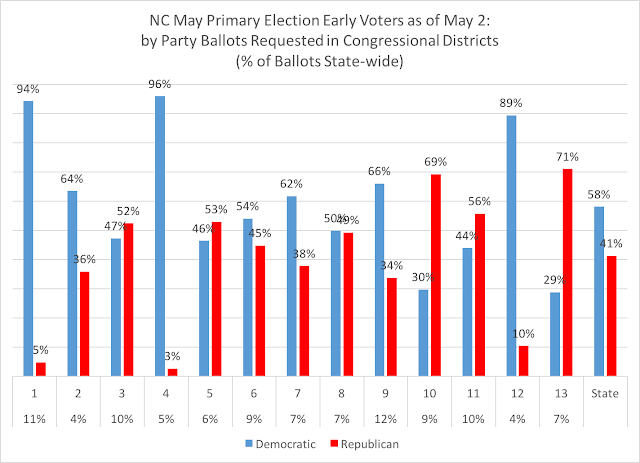 Due to the fact that the first, fourth, and twelfth congressional districts are so heavily Democratic, it's not surprising to see that 90 percent or more of the ballots selected from early voters are for the Democratic primary. The largest percentage of ballots requested in the state comes from the 9th Congressional District, where there are two hotly contested primaries: the Republicans battling between incumbent Robert Pittenger and Rev. Mark Harris (who lost the 2016 nomination battle to Pittenger by less than 135 votes) and the Democrats' contest between nationally-favored Dan McCready and Christian Cano. However, two-thirds of the so-far early requested ballots in the 9th are Democratic ballots. More on this later.

A carefully-watched aspect to this year's election is the influence of younger voters, especially those of Millennial (currently 22-38 years old) and Generation Z (18-21 years old). But in North Carolina, younger voters aren't making the impact, at least in early votes, that was promised: 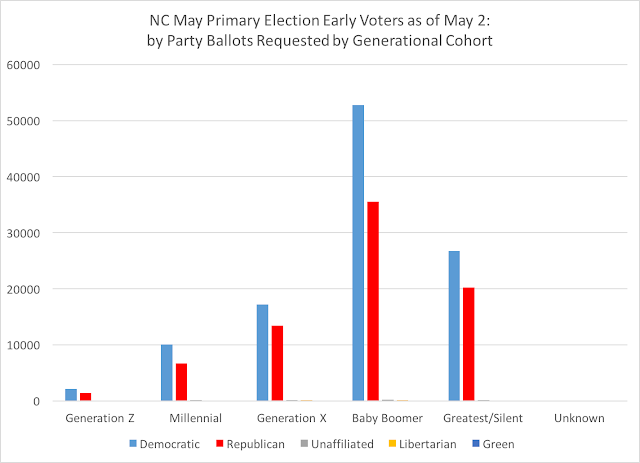 Barely 11 percent of the 187,000 ballots requested so far are to voters under the age of 37, with party ballots selected within each generation cohort here: 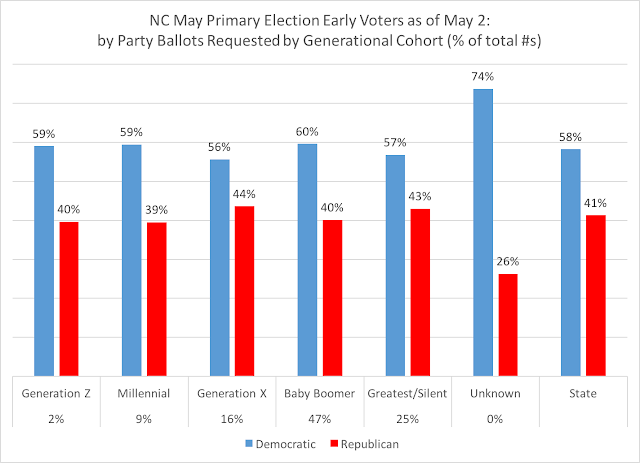 As should be noted, when it comes to party ballots, voters within the two partisan registrations (Democrats and Republicans) can only select their party primary ballots, but unaffiliated voters in NC can selected either party ballot (but only one party primary). Breaking down party registration within the cohorts so far for early voters shows distinctive partisan interests by generations, especially among unaffiliated registered voters: 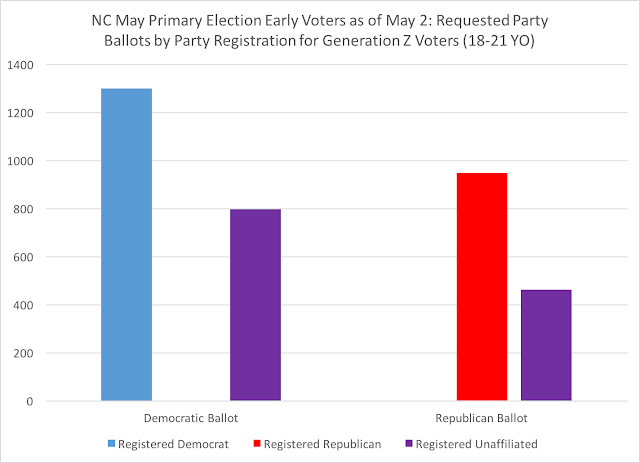 Of the Gen Z early voters so far who are registered unaffiliated, 61 percent picked Democratic ballots compared to 36 percent selecting the Republican ballot. 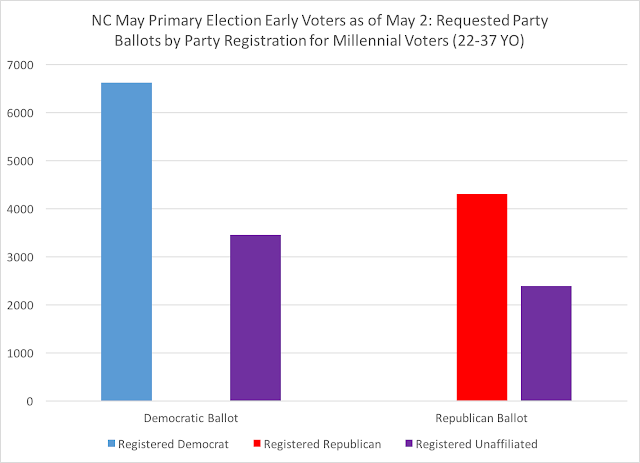 Among Millennial unaffiliated voters who have cast early ballots so far, 58 percent picked the Democratic ballot to 40 percent selecting the Republican ballot. 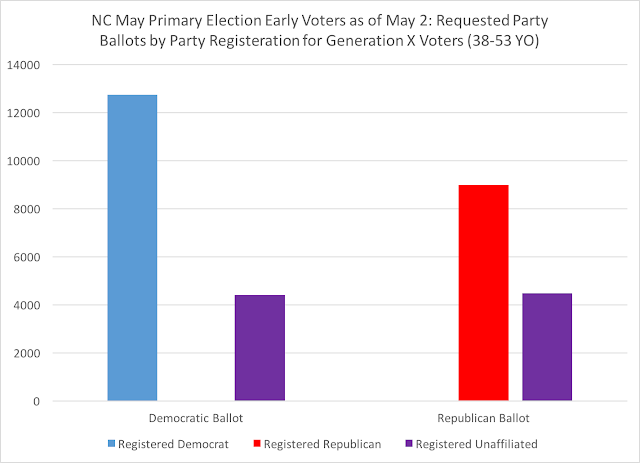 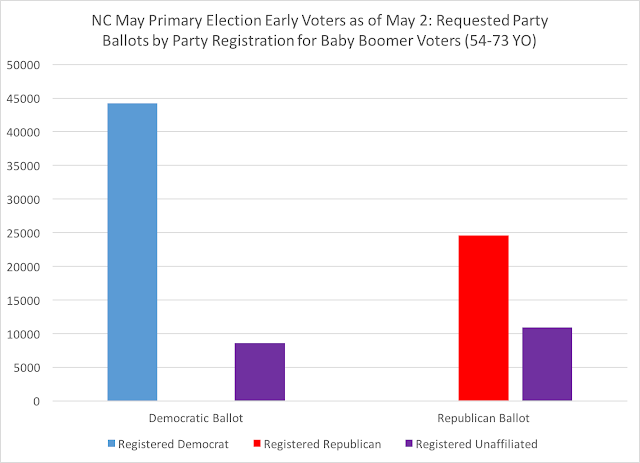 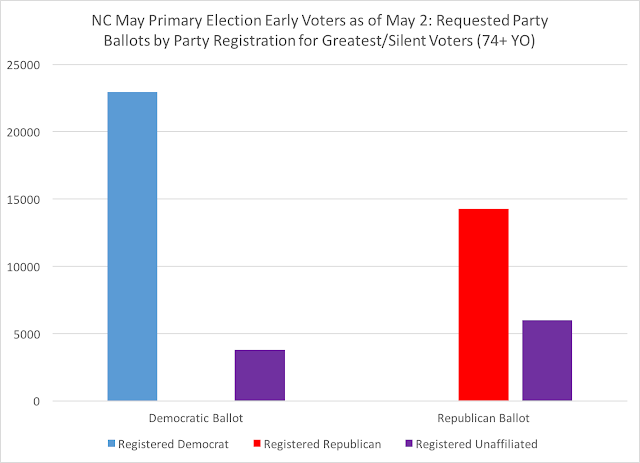 And among older voters who are registered unaffiliated, 60 percent chose the Republican primary ballot to 38 percent Democratic. 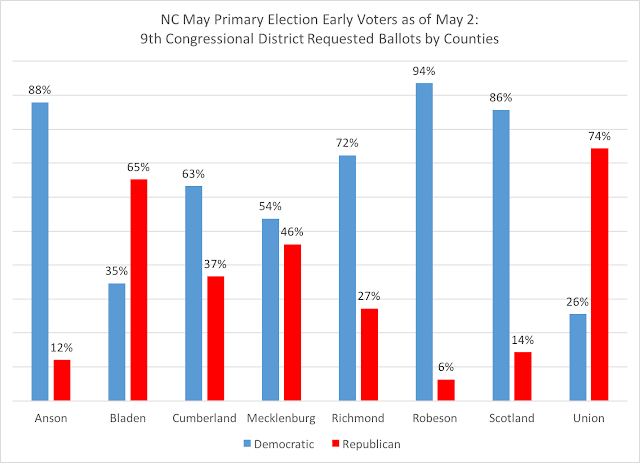 And among the partisan primary ballots requested: 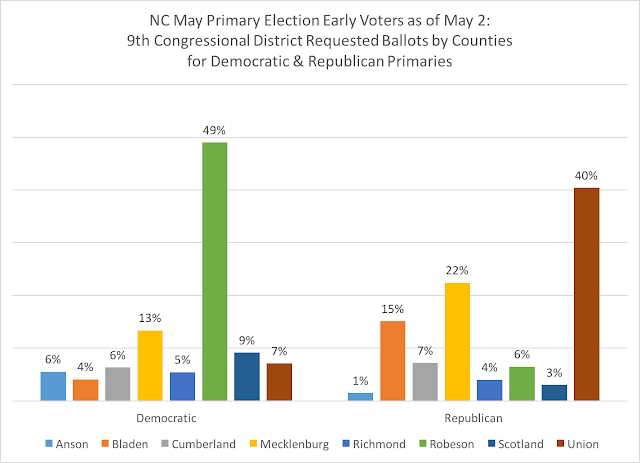 So far, among Democratic ballots for the McCready-Cano contest, nearly half of the early ballots are coming from Robeson County, while the Pittenger-Harris-Goins contest is drawing a disproportionate percentage from Union County. To give a sense of where the 2016 dust settled between Harris and Pittenger and the third candidate in that race, here are graphs from that June contest that may be somewhat similar to this year's contest (i.e., a low voter turnout): 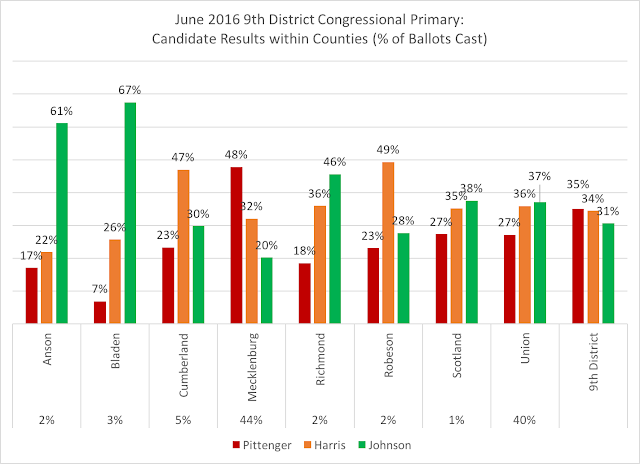 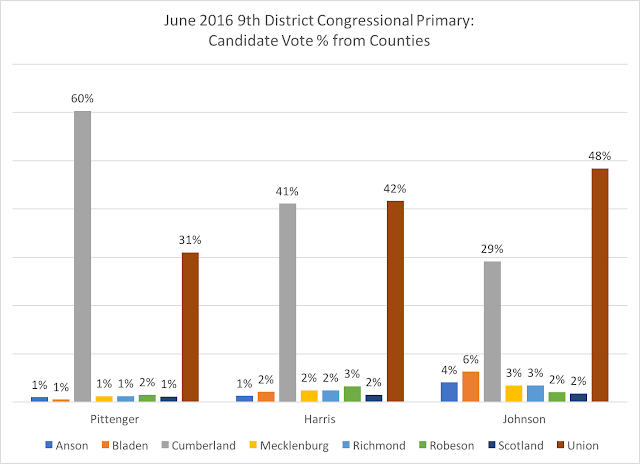 The key counties for this year's contest may again be Union and/or Mecklenburg. Based on early votes so far within the GOP primary, Union has 40 percent of the early ballots cast as of May 2. Will Pittenger be able to use the power of incumbency to secure a renomination, or can Harris draw on his former Union County strength from 2016 and attract the former Johnson voters in that county to his side?

Finally, in the state's last "blue-moon" election cycle, the 2006 primary election held in May that year attracted 12 percent of the state's 5.4 million registered voters. If we finish early voting (on Saturday, May 5) with a little over 3 percent of the state's voters casting early ballots, could we see these early votes as either a fourth or a fifth of the total ballots to come in for the primary election? My guess at this point: when we close the polls on next Tuesday, probably 15 percent state-wide voter turnout as a total, but I wouldn't be surprised at all if it was less.
By OldNorthStatePolitics.com - May 02, 2018