Urban vs. Suburban vs. Rural: Where's the Battleground?

In a discussion on WFAE's Charlotte Talks, I joined both Jonathan Kappler of the NC Free Enterprise Foundation and Dante Chinni of the American Communities Project to discuss the idea that in this year's mid-term elections, suburbs could be the electoral battleground fields.

I've done a lot of data investigating and researching into North Carolina's "regionalism" of urban vs. suburban vs. rural counties, but wanted to get a clearer picture of the national landscape and how the Old North State might line up, or be misaligned, to national patterns, especially when it comes to presidential voting patterns.

First, though, there needs to be some clarity of what we mean by the three terms: urban, suburban, and rural. There is no commonly accepted definition of what it means to be urban other than related to "cities." There is, however, the U.S. Office of Management and Budget's delineation of "metropolitan statistical areas," which classifies MSAs as having "at least one urbanized area of 50,000 or more population, plus adjacent territory that has a high degree of social and economic integration with the core as measured by commuting ties."

Therefore, for this analysis, using the term "urban" will mean a county with an major city or "central city" and the associated counties ("surrounding counties") that feed into that central city's county.

So, for example, Charlotte's MSA has the Queen City as its "central city" and Mecklenburg County is the "central county"--thus the MSA's urban area. The surrounding counties--Gaston, Lincoln, Iredell, Cabarrus, Rowan, Union, and a few counties in South Carolina--would be those "adjacent" areas that have "a high degree of social and economic integration with the core as measured by commuting ties."

The OMB has a second classification for potential "urban" areas: micropolitan statistical areas. These areas "have at least one urban cluster of at least 10,000 but less than 50,000 population, plus adjacent territory that has a high degree of social and economic integration with the core as measured by commuting ties." In North Carolina, areas like Mount Airy is considered a micropolitan statistical area.  Typically these areas have only one county associated with the designation.

Finally, there remains the counties not included in either metropolitan or micropolitan statistical areas. These are considered "rural" counties in this analysis.

Once this classification was developed based on OMB's listing, I acquired the 2012 and 2016 county-level data for 49 states (Alaska was excluded in this analysis) and classified each state's counties into whether they were part of an MSA (and whether the MSA counties were a "central county" or "associated county"), a micropolitan statistical area, or neither of the statistical area designations, and thus considered a "rural" county. 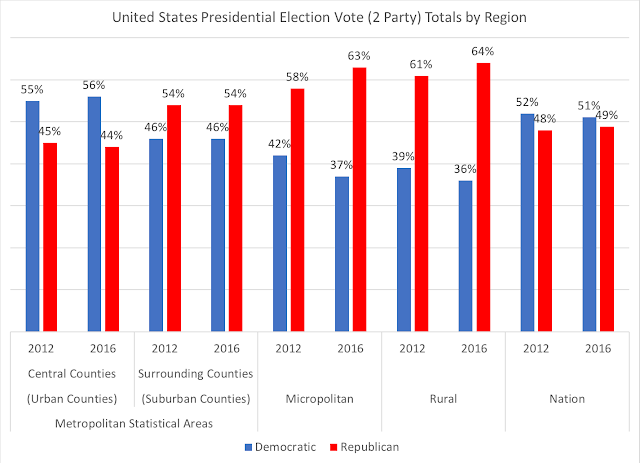 * chart updated with national percentages to give context to the regions and corrected suburban percentages.

Comparing it to 2016's presidential totals and percentages in the four categories, the "gap" between the partisan camps stayed in all four: 56 percent of the urban vote went to Clinton, while 54 percent of the suburban vote went for Trump. The largest jumps, however, were in the micropolitan and rural areas: 63 percent and 64 percent for the Republican, respectively.

In looking at North Carolina's urban, suburban, micropolitan, and rural county dynamics in both 2012 and 2016 presidential elections, some differences are apparent between the Old North State and national trends: 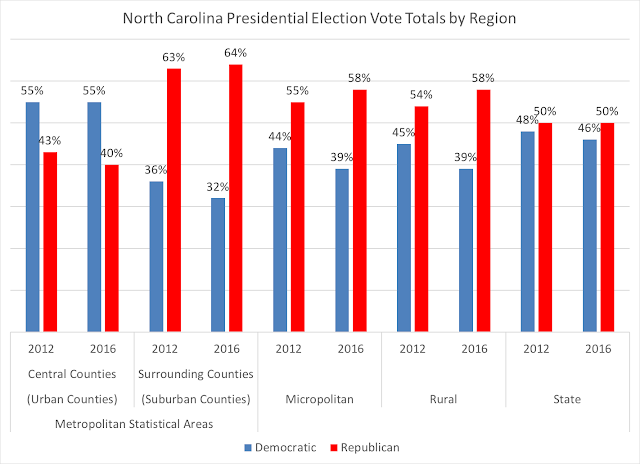 * chart updated with state percentages to give context to the regions.

To give a sense of the current dynamics of North Carolina's regions (combining both micropolitan and rural counties together), the following data is from the April 7, 2018 voter registration data from the NC State Board of Election and Ethics Enforcement.

First, looking at the party registration within the three different regions--urban, suburban, and rural: 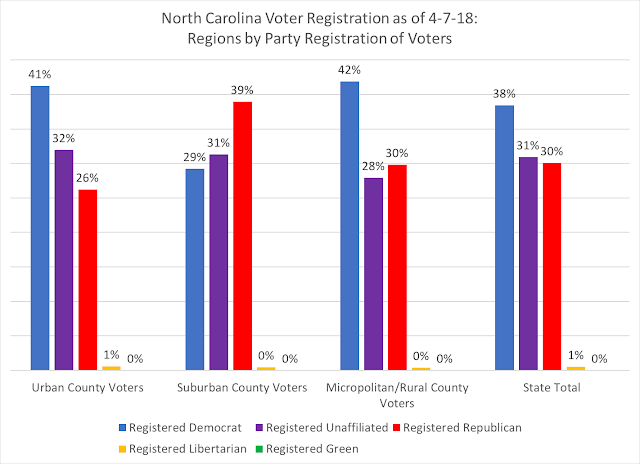 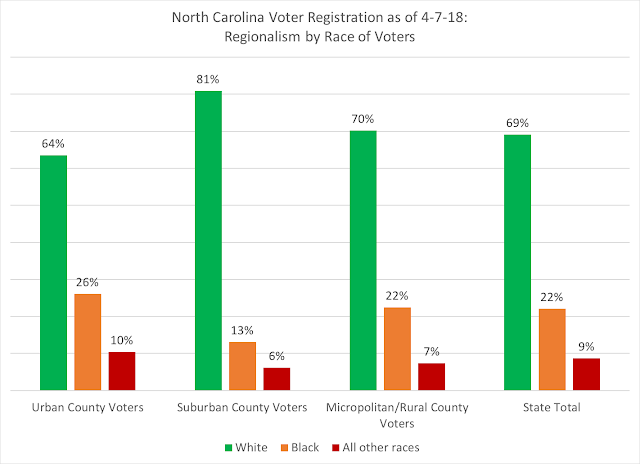 Finally, the generational composition of the three regions: 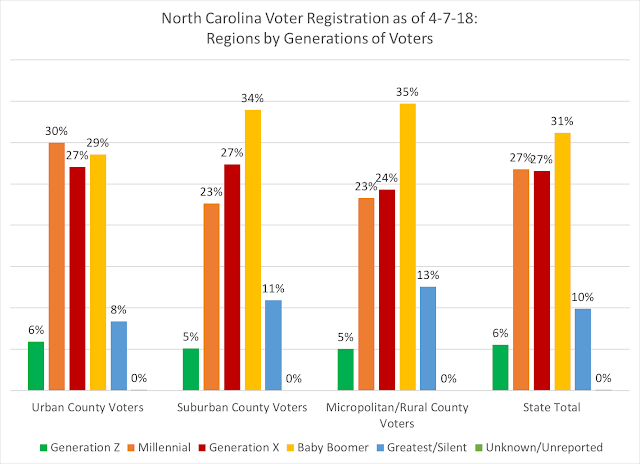 With suburbs the new fascination of political analysts, the dynamics of voter behavior shows urban voters aligned against suburban and rural voters, at both the national and North Carolina level.  While suburbs may be this year's political fixation as to "battleground" status, the battle seems lopsided, at least from the data.
By OldNorthStatePolitics.com - April 17, 2018