As has been my want over the past few years, I'm going to present a "here's where we stand" analysis of the voter registration pool in the Old North State. While a lot of folks are making their 2018 predictions, I've decided to stay away from the mindless "here's what's going to happen" in the new year because if the past three years have taught us anything about politics, it is that punditry predictions are usually pointless.

Another notable facet of the voter registration pool is the ascent of Millennials and Generation Zers (Millennials being born between 1981 and 1998, with Gen Zers being after and the first ones registering this year). The entire pool breaks down with Baby Boomers (born between 1945 and 1965) still claiming the plurality of the voter registration, but just barely at 32 percent, while Millennials and Gen Zers combined are at 30 percent; Generation X (those born between 1966 and 1980) at 26 percent, while the Greatest/Silent generations (born before 1945) are 11 percent of the pool.

The party registration within these generational cohorts continue to show the drive towards the unaffiliated among younger voters: 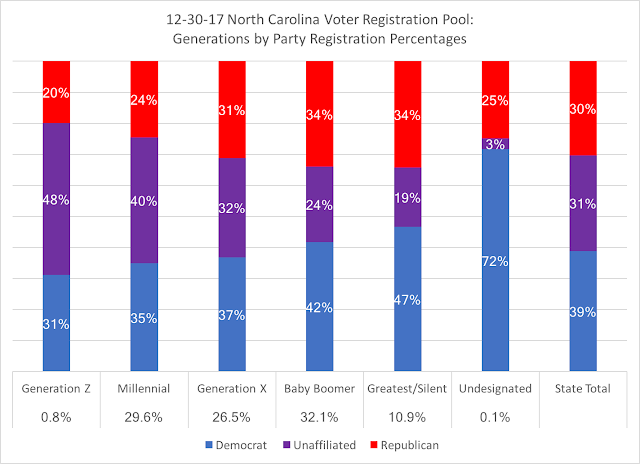 Some key takeaways within this one graph:


I had thought (again, this is a dangerous thing to do) that by this point, voters under the age of 35 (Millennials and now Generation Z) would be an equal percentage to Baby Boomers, but they haven't quite caught that generation yet. Perhaps this year, but most definitely by the next presidential election in 2020, North Carolina will have a voter pool with a plurality of the younger generation cohorts.

Sticking with the generational analysis, I analyzed the voter registration pool by generations and different attributes, such as by "region" (urban, suburban, or rural county locations): 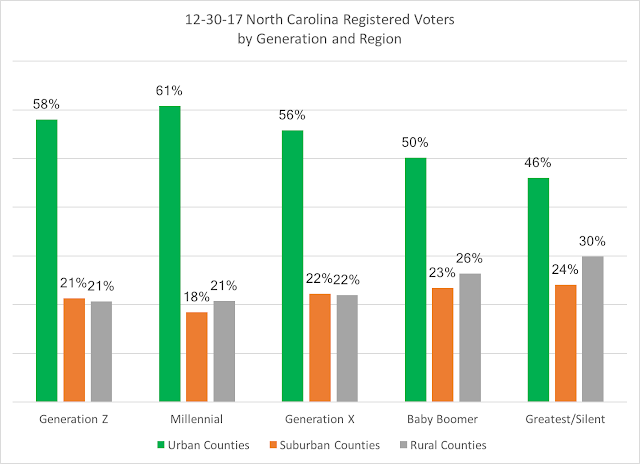 And then by race within each generation: 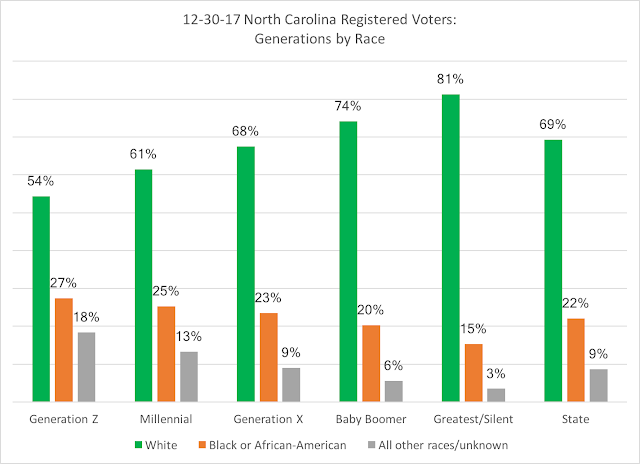 Within the two graphs, we see other important dynamics that are impacting North Carolina politics: the urbanization of the state and the racial diversification of the voter pool. In general, 54 percent of all North Carolina voters live in the nineteen urban counties (as defined by the OMB), with another 22 percent of voters living in 24 suburban counties out of the 100 counties (more on this "regionalism" later as well).

Taking these two aspects--generation and race--and then finding the party registration, one see more specific evidence of the rise of unaffiliated voters in the state: 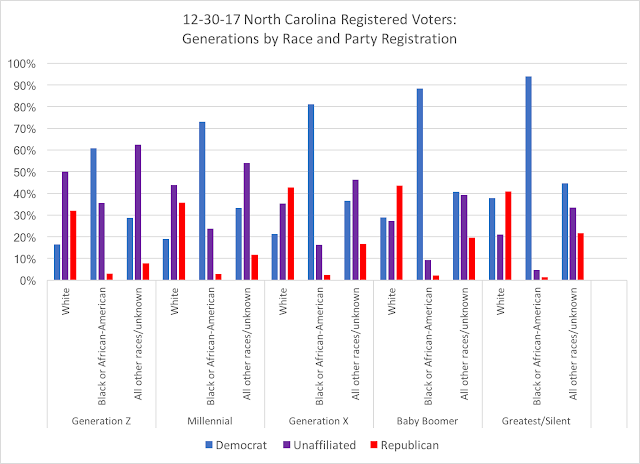 While it may take you to click on the graph to see the critical patterns, several important trends are evident when you look within the racial breakdowns by generation as to party registration:

In recombining all generations and focusing solely on race, the party registrations among racial groups show that white voters are plurality Republican registration, black/African-American voters are overwhelming registered Democratic, and all other races are decidedly unaffiliated. 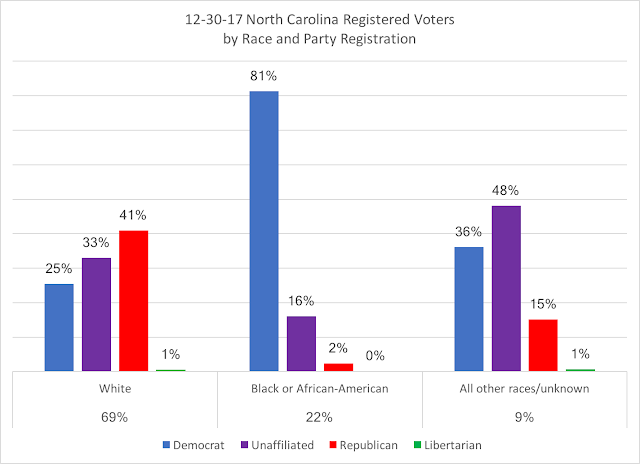 Separately, ethnicity within the 6.8 million NC registered voters show that only 3 percent identify as Hispanic/Latino in the state, but among those voters, they are much more likely to be registered Democratic or unaffiliated. 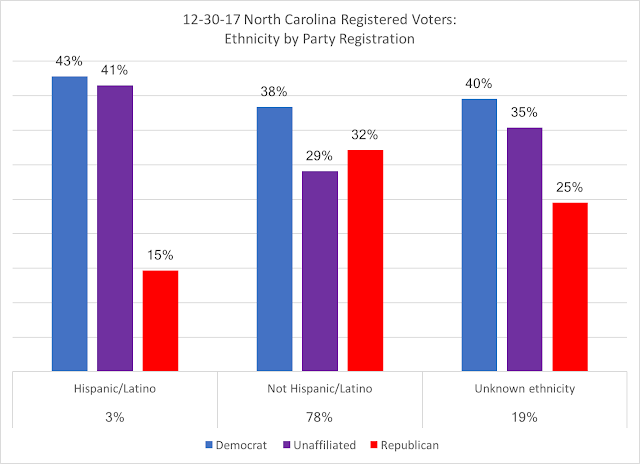 Then, going back to the generations and looking within the gender breakdowns and party registration, one tends to think that men will more likely register Republican while women register Democratic, and that is the case with older voters, but once you get into Millennials and Generation Z, the gender gap falls off dramatically, with unaffiliated registration dominating: 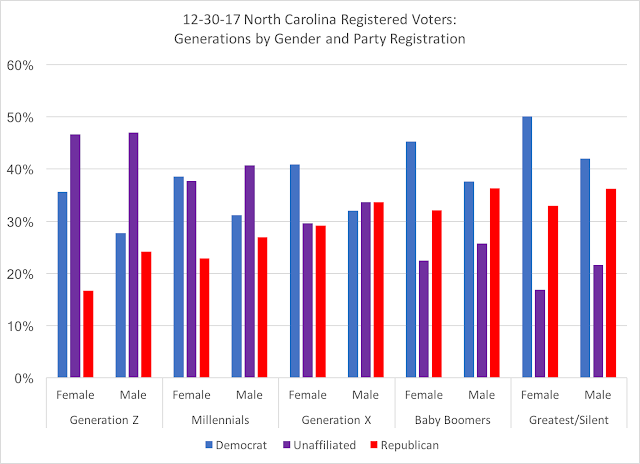 Finally, in looking at regionalism within the state (urban, suburban, and rural counties), the Democratic-leaning of urban areas, while suburban NC leans most Republican, is evident in the registration figures. 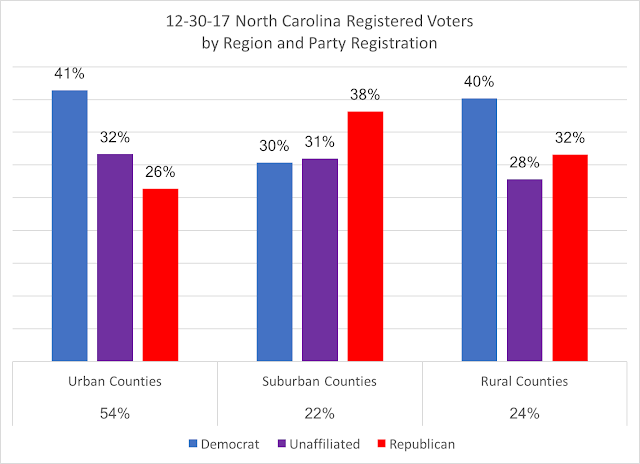 As North Carolina enters 2018 and the "blue moon" election cycle of no major state-wide office being contested, the dynamics of watching what could be an interesting mid-term election year may be found in the registration numbers and trends as we march to November.
By OldNorthStatePolitics.com - December 31, 2017