I looked into North Carolina's voters who have cast accepted absentee ballots and paired with information as to whether they were registered in 2012 and, if so, their 2012 voting methods if they cast ballots four years ago.

In terms of the 2.8 million North Carolinians who cast accepted in-person absentee ballots and were able to match their 2012 registration status (whether they were registered before or after 2012) and, if they were registered, did they vote and what voting method (mail-in, in-person early absentee, on election day) did they use.

For the overall state-wide numbers: 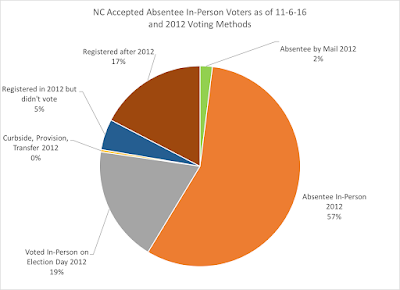 So, among the 2016 in-person early voters in NC, 57 percent of them used the same method, with another 2 percent voting early through mail-in ballots.

There was 19 percent of this year's in-person early voters who changed their voting method from waiting until election day 2012 and decided to cast an early in-person ballot this year, with another 22 percent having not voted in 2012 (but were registered) combined with those voters who registered after 2012's election.

In response to a reporter's query, I broke these voters into their party registration (registered Democrat, registered Republican, and registered unaffiliated (and yes, there are Libertarians, but their numbers are small)) and ran the same analysis: 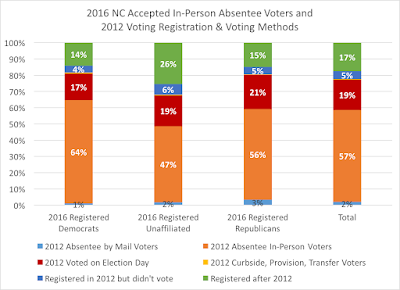 So, among the 2.8 million early voters who cast accepted in-person absentee ballots, 238,430 registered unaffiliated voters, 224,445 registered Democrats, and 174,779 registered Republicans could be considered 'new' voters in this year's general election.
By OldNorthStatePolitics.com - November 07, 2016