Differences in Absentee Ballots: 2012 vs. 2016 by Party Registration in North Carolina

With the dramatic increases in absentee ballots in North Carolina and preparing for the general election day, a question from a Twitter follower was, "what areas saw the most changes among absentee voters?"

Using information on accepted absentee ballots in both 2012 and this year (with some changes in the numbers still expected), I was able to run cross-tabs of the different party registration based on two key factors: region and race.

First, the Democrats saw a very slight drop in their absentee ballots (both mail-in and in-person) from 2012's totals. In looking at the cross-tabs by region (urban, suburban, and rural counties) by race, the following demonstrates the changes in the Democratic voter base among absentee voters: 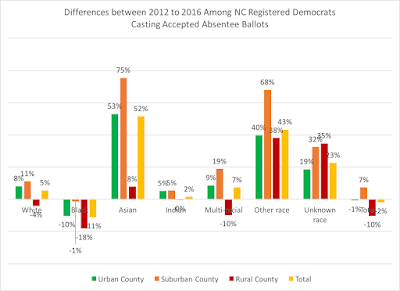 Among white voters, Democrats overall saw a 5 percent increase in registered members of their party showing up to cast absentee ballots, but there were noticeable differences by region: rural white Democrats were slightly down, while urban and most notably suburban white Democrats were up over their numbers from four years ago.

The critical change from 2012, to the negative, is among black Democrats. Only among suburban black Democrats was there an increase from four years ago, while among urban and rural black Democrats, the drops were noticeable to have an overall drop of 8 percent from 2012's numbers.

Among all other races, however, registered Democrats saw, at times, dramatic increases in their numbers from 2012's totals. And while some of the changes were due to what would appear to be small numerical changes (for example, Indian Americans went from 7,372 to 7,485), registered Asian Democrats went from 8,146 to 12,345, while those voters who classify themselves as 'other races' went from 17,220 to 24,677.

Overall, registered Democrats saw their greatest decline in their numbers from rural counties, down 10 percent (from 324,373 to 290,856) and contributing to the slight decrease in their overall numbers. Yet suburban Democrats, going from 200,445 to 215,107, showed the greatest increase.

Among registered Republicans, the total numbers went up by 13 percent, but there were slight differences among the regions and racial categories. 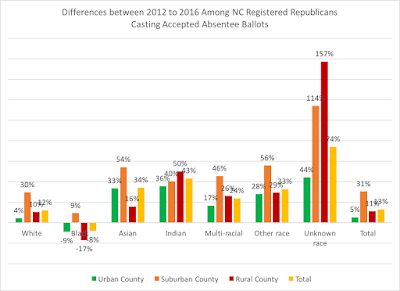 While the black Republican numbers seem dramatic, it was an overall difference between 10,949 in 2012 and 10,067 this year in terms of ballots being cast.

Again, the other races were among the consistent growth areas, but like with black Republicans, the numbers were fairly small: Asian Republicans from 3,624 to 4,865; Indian Americans from 1,937 to 2,776; and multi-racial Republican voters from 1,604 to 1,985. Among those voters who did not indicate a race on their voter registration form, the noticeable increases was from a total of 9,783 in 2012 to 17,029. Overall, like with registered Democrats, suburban registered Republicans saw the greatest overall regional increase, of 31 percent.

Finally, the huge increase of registered unaffiliated voters is dramatic in comparison to their partisan counterparts. 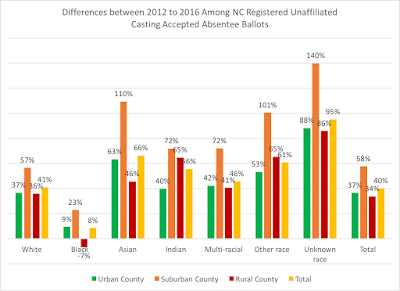 Again, like the partisans, all other races saw huge increases among unaffiliated voters. Among Asian registered unaffiliated voters, their numbers in 2012 was 10,422; this year, there was 17,340. The other numerical large-scale increase was among 'other' races, which went from 12,850 four years ago to 20,670 this year.