With today's expansion of early voting sites and hours, North Carolina's absentee ballots, particularly those by in-person, should start to dramatically take off, and considering that this year's cumulative absentee ballots are only slightly behind the same day totals from 2012, we should expect the flood gates to potentially open up on votes being cast before November 8 in the Old North State.

First, a little context regarding the expansion of early voting sites and hours. Several North Carolina counties had fewer sites and hours than in 2012 during this first week of absentee by in-person voting. Yesterday, there was 253 sites that were open for a total of 2,195 hours; today, there is slated to be 394 sites open with 3,517 hours of voting opportunity. The chart below shows the considerable rise in both sites and hours between now and November 2, when absentee by in-person voting ends. 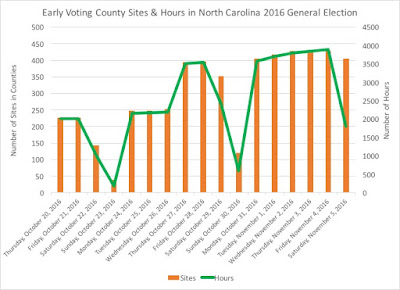 Tomorrow's report on NC absentee voting should reflect a considerable rise, but it may be Saturday before we truly see the surge occur in in-person early voting.

While we await today's numbers, the latest report from the NC State Board of Elections data file of absentee ballots (by mail-in and in-person) shows that over 1 million ballots have been sent out to voters. The following chart shows the ballot requested type (mail vs. one-stop, or in-person) and the delivery type (the ballot was requested by e-mail, fax, in person, or mail):

Using the same day cumulative total for all absentee ballots in 2012, this year's numbers are very slightly behind where things stood four years ago (down 4 percent from 2012's 1,119,338 ballots cast at this same date from Election Day). 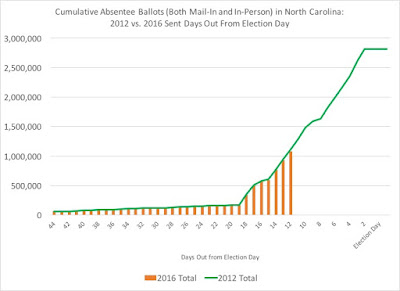 Of these 1,081,594 ballots requested, the party registration of the voters is:

The party registration in comparison chart form is: 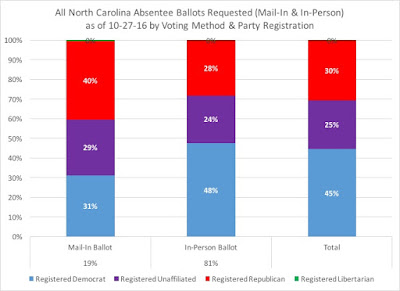 An important point to note here: typically, among mail-in ballots, registered Republicans are a majority (50 percent) of the returned and accepted ballots (as they were in 2012). At only 42 percent, this shows a considerable decrease in these voters using this voting method (more on mail-in ballots below). Among in-person ballots, registered Democrats are typically 49 percent (as they were in 2012); they are only slightly behind, and considering that many counties have had fewer sites and hours in comparison to 2012, this may be a positive sign for Democratic performance as we move into the final week of early voting.

In terms of all absentee ballots (mail-in and in-person), registered Democrats are 11 percent behind where they were four years ago on this same day, while registered Republicans are 9 percent behind; the interesting pattern that is broken from 2012 is the fact that registered unaffiliated voters are substantially ahead of their same-day totals from 2012, by 25 percent. 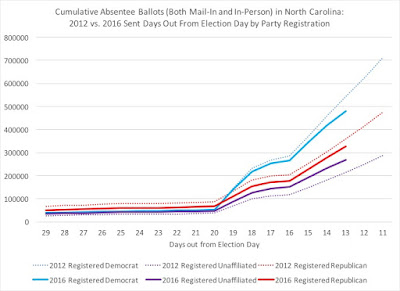 Of these 1 million ballots requested, the return status of all of the ballots indicated that 89.5 percent of them have been returned and accepted as votes for the November 8 election (967,923): 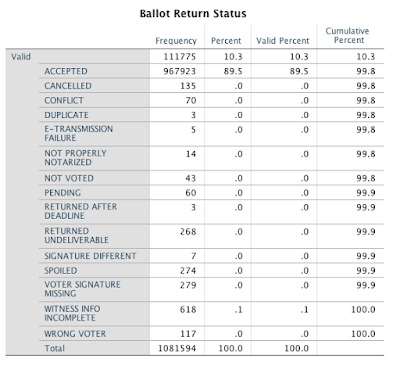 In breaking down the 1 million absentee ballots by the ballot type (in-person vs. mail-in), I ran the numbers for accepted versus spoiled for both ballot types: 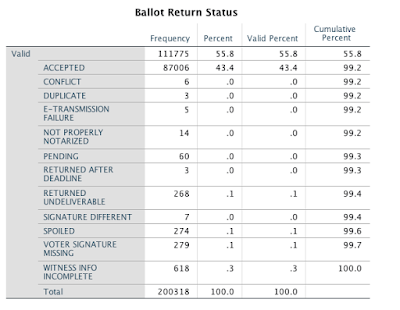 This makes a total accepted ballots so far for North Carolina of 967,923 between the two voting methods. The following table gives the party registration of the voters who have submitted and had their ballots accepted by the ballot method:

In comparison graph form of the accepted ballots for accepted mail-in, in-person, and total accepted: 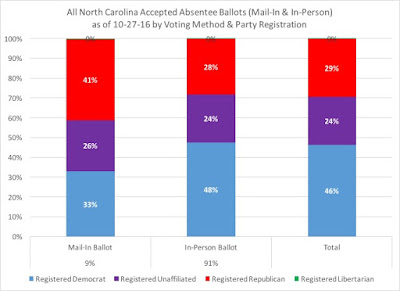 Finally, when analyzing the total cumulative ballots so far by race and comparing it against 2012's similar days, it is apparently that a core group of voters--African-Americans--are not quite engaged in early voting. 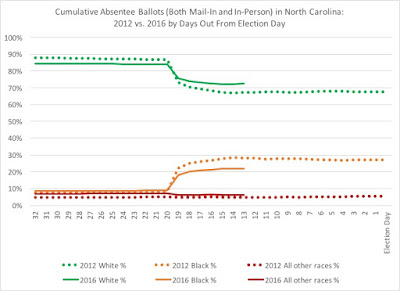 This may change with the expansion of sites and hours, so watching these comparison trends will be important to gauge grass-roots/ground game operations, especially for Democrats.

The racial composition of both methods of early voting is: 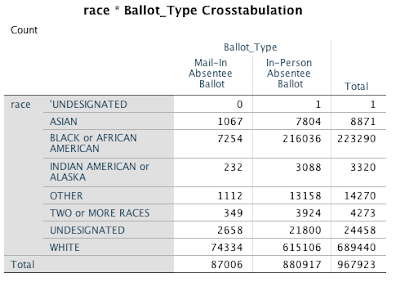 And the racial composition by voter party registration is: 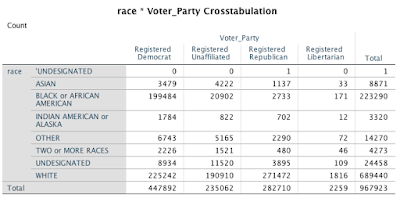 In looking at the party registration of in-person absentee voters, the trend of partisans either slightly underperforming or comparable, while registered unaffiliated voters overperforming, is quite noticeable in comparing day-to-day cumulative totals: 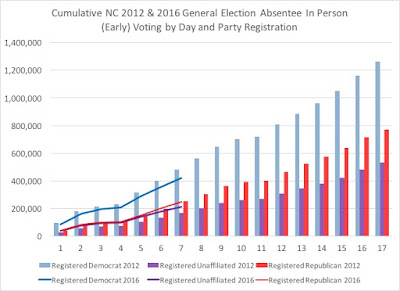 In terms of the daily percentages by party registration of in-person ballots being cast: 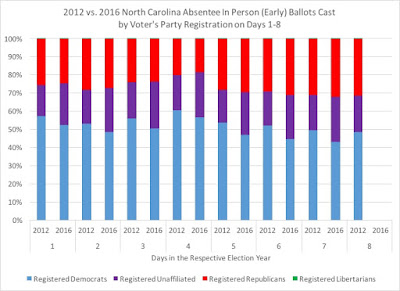 In looking at the racial composition of in-person accepted ballots, there is significant differences between the parties in their coalitions of voters: 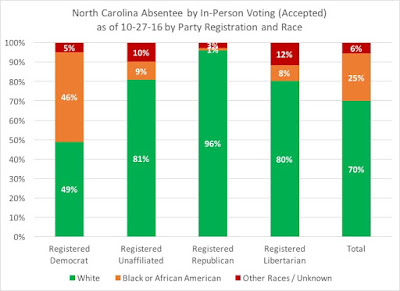 In the daily percentages by race of in-person accepted ballots compared to 2012, the noticeable difference is in African-American voters in their percentage of the ballots being cast: 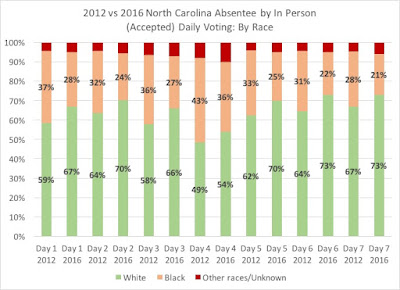 Among gender, women continue to make up a sizable majority of the in-person ballots being cast (56 percent), with 49 percent of female ballots coming from registered Democrats: 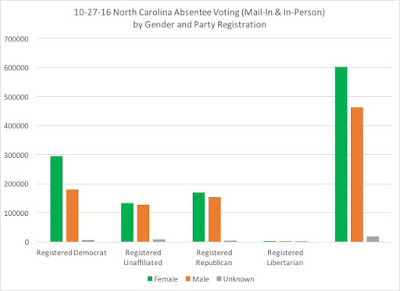 In looking at in-person voters and if they were registered in 2012 and, if so, how they voted, we see a continued preferences for casting ballots by in-person as was present in 2012's voting: 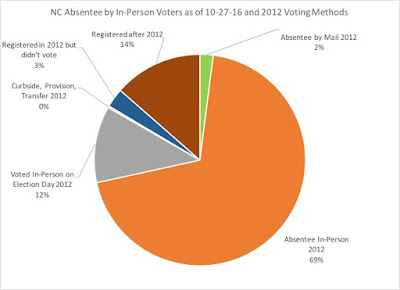 In comparison to the past few days, in-person ballots from urban county voters has taken a slight dip, but are still a majority of the ballots accepted. This urban domination should start to increase with the increase in urban sites, especially in a county like Guilford (home to Greensboro), which had only one site open for the past week. 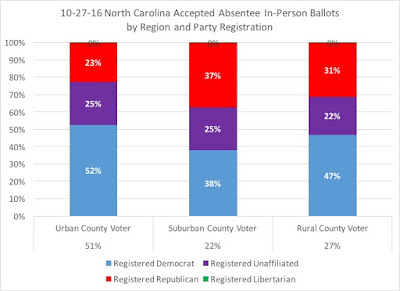 Those voters born outside of North Carolina (or unknown birth state) continue to dominate the in-person accepted absentee ballots with 57 percent of the ballots. 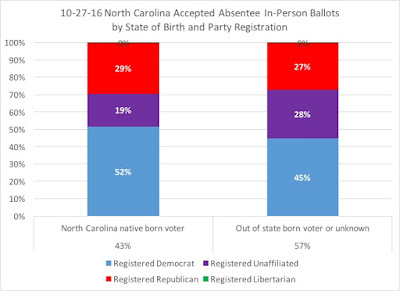 Finally, among in-person absentee ballots, the generation composition of this electorate continues to be more Baby Boomer and older. 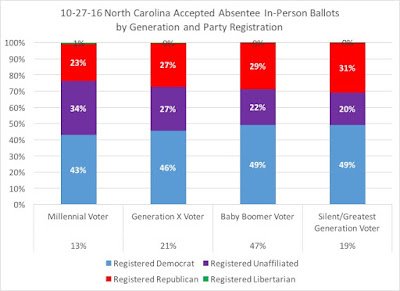 Now, turning to mail-in absentee ballots, while registered Republicans continue to lead in this form of early ballot casting (41 percent of the total accepted ballots) over Democrats (33 percent) and unaffiliated voters (26 percent) ... 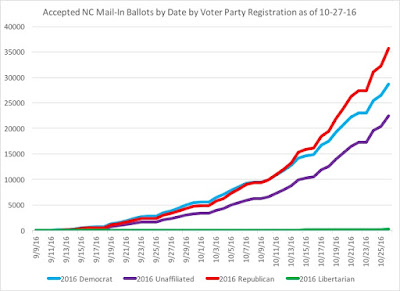 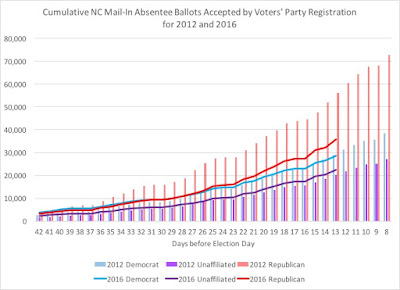 Of the outstanding ballots still yet to be returned and accepted: 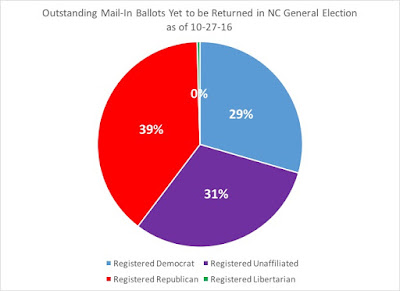 Finally, the voting methods of this year's mail-in absentee voters: 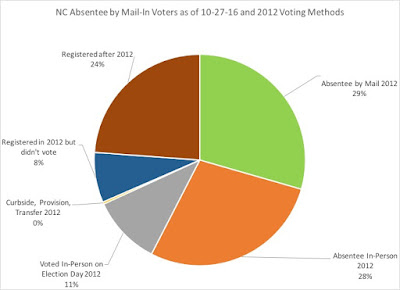 I took one more analysis based on a suggestion from someone who follows me on Twitter: what are the percentages of unaffiliated voters who have cast absentee ballots so far in terms of whether they participated in the March 2016 primary or not?

In North Carolina, for primary elections, the state is a semi-closed primary system, meaning that only registered partisans and, by allowance of the two major parties, unaffiliated voters can vote in a party's primary. In isolating the current absentee voters who are registered unaffiliated, over half of them (56 percent) voted in the March 2016 presidential primary.

Of those registered unaffiliated voters who cast primary ballots, 46 percent of them voted in the Democratic primary and 54 percent voted in the Republican primary.

The growing 'great question' of this year's North Carolina absentee (early) voters is the rise of the unaffiliated voter, and what that might mean for November 8th's election. We won't know until the votes are cast, but are these unaffiliated voters really 'unaffiliated' and do their participation in the March primaries indicate some form of partisan leanings? Not sure if they do or not, partly due to the kind of candidates that North Carolina saw in March, but it will be interesting to see if any further analysis can detect these unaffiliated voters' partisanship after the election.
By OldNorthStatePolitics.com - October 27, 2016