In doing some comparative cumulative analysis of absentee voting (based on ballots sent dates) in both 2012 and 2016 so far, an interesting trend has developed that may give some insight as to how North Carolina absentee voters, by both mail-in and in-person, may be trending.

First, I looked at the overall cumulative total numbers for 2016 for both mail-in and absentee ballots, and the 2016 overall totals are slightly behind 2012's same day numbers (by about 3 percent). 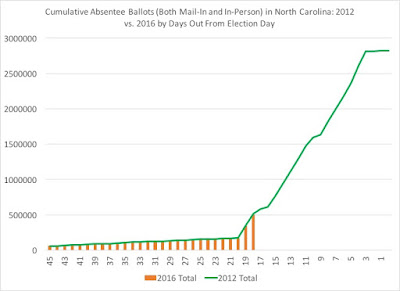 However, there are some distinct differences when one looks at party registration for total absentee ballots being sent out: 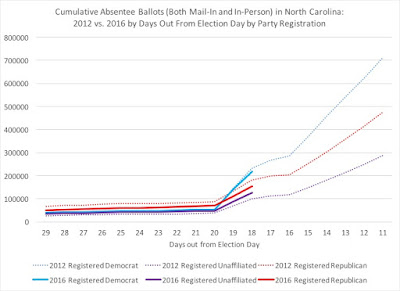 With two days of early voting into the mix with mail-in ballots, I decided to look at the trends based on race within the cumulative absentee ballot numbers, knowing that white voters overwhelmingly dominate mail-in ballots while black voters over-perform in absentee in-person ballots. 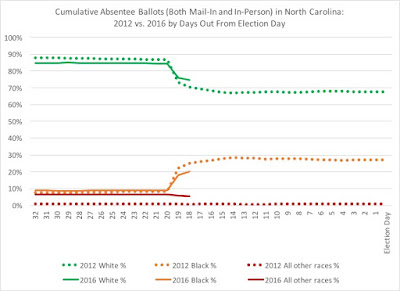 So, I decided to look at white voters by party registration to see what trends might be present. Even though absentee ballots from white voters is running slightly ahead of the same-day 2012 numbers (2 percent), the significant gap between 2012 Republican absentee ballots and this year's, combined with the over-performance by both Democrats and unaffiliated voters in comparison to their numbers from four years ago, is striking. 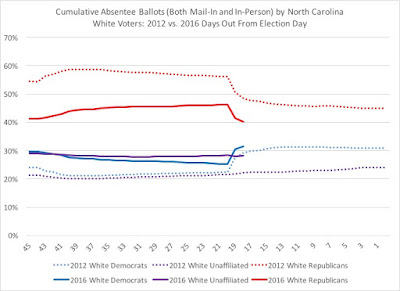 Since Republicans tend to be an exclusively white party in North Carolina in terms of registration (94 percent white in the 10-22-16 voter registration pool), the gap between 2012's performance by white Republicans and their current turnout indicates that something is not motivating them to turnout, at least through absentee voting. I decided to look at one more potential factor that may be causing this.

Much has been made about the urban/rural divide in North Carolina. In comparing the percentages of the absentee ballots that came from urban, suburban, and rural counties, I isolated just white voters in different types of counties and their party registration to find the following (again, using the final overall 2012 data and the 10-22-16 absentee data so far):

While more urban Democrats and urban unaffiliated voters are showing up this year so far than in comparison to the overall 2012 performance, it appears that urban Republicans are not casting absentee ballots, at this point in 2016's absentee voting, at the same potential rate as their 2012 overall percentage.

This could speak to the issue of the 'top-of-the-ticket' lack of enthusiasm, the potential differences between the Democrats' ground game in the state compared to the Republicans' ground operations, or it could also speak to the Republican presidential candidate's unfavorability and lack of motivation by some white Republicans, particularly those GOP voters who may be more moderate in urban areas, to 'get out and vote.'

Of course, all of this could be also attributed to the impact of Hurricane Matthew in the eastern part of the state, as well as the changes made by Republican county boards of elections in reductions in polling places as compared to four years ago.

Nevertheless, with two weeks out before November 8, these may be the warning signs for Republicans of serious issues that, unless corrected, could be critical to the final tallies on the evening of November 8th. Subtle shifts in turnout may have a significant impact on the final counts.
By OldNorthStatePolitics.com - October 23, 2016