Now that we are entering the first full week of North Carolina absentee (early) in-person voting and that many counties will begin to expand their locations and hours of early voting at some point during the week, we should start to see the total numbers for absentee ballots increase substantially (both in-person, which will be the bulk, and mail-in ballots, which are still being requested and coming in).

As of Monday, October 24, 769,630 absentee ballots have been requested so far in North Carolina, with the party registration and voting method/ballot type being:

So far, of all the absentee ballots this year, the numbers are about on-par with the same day out from Election Day as in 2012, down only one percent. This is interesting in that many counties had fewer locations open and shorter hours than the first five days of in-person voting from four years ago. 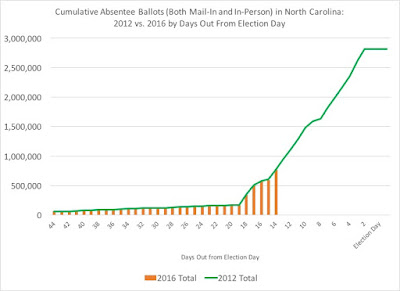 In terms of party registration for all absentee ballots so far: 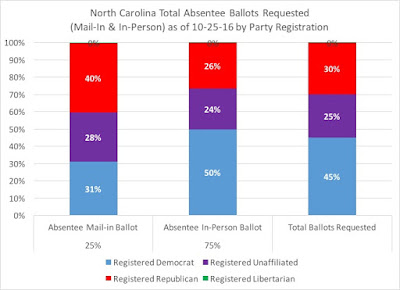 Currently, registered Democrats are 45 percent of all absentee ballots, registered Republicans 30 percent, registered unaffiliated voters are 25 percent, and registered Libertarians are less than one percent. 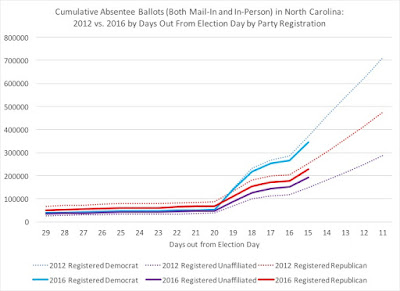 In terms of 'accepted' ballots for the November 8 election, over 650,000 have been accepted as votes for the general election so far:

The party registration breakdown by voting method (type of ballot) for these accepted ballots is: 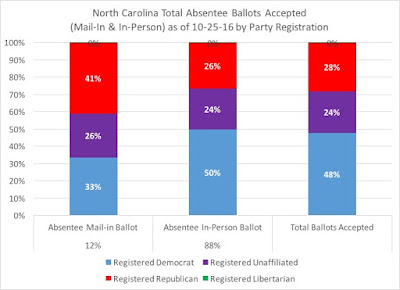 In 2012, among mail-in ballots, registered Republicans ended up being half of all those of ballots; among 2012's in-person ballots, registered Democrats ended up being nearly half (49%) of those ballots. Registered Republicans are down in comparison to their final 2012 mail-in percentages, while Democrats are matching their final 2012 in-person percentage so far.

Since the bulk of absentee ballots will be 'in-person' voting, the following two graphs present the comparison of where ballots are, by each day of early in person voting. The first graph gives you the sense of the total trend from 2012, with 2016 as the line graphs, and the second isolates the first seven days of early voting comparisons between 2012 and 2016: 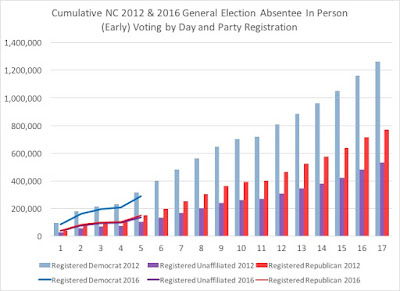 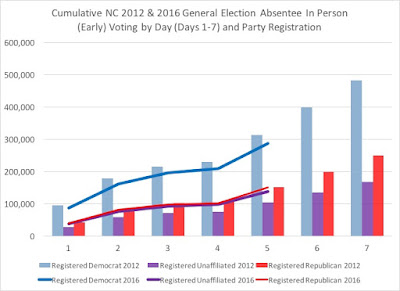 Among the cumulative totals of in-person ballots so far, registered Democrats are 50 percent of the ballots, with registered Republicans 26 percent and registered unaffiliated voters are 24 percent.

In terms of the daily party percentages for the first five days of early in-person voting in comparison to 2012's same day percentages: 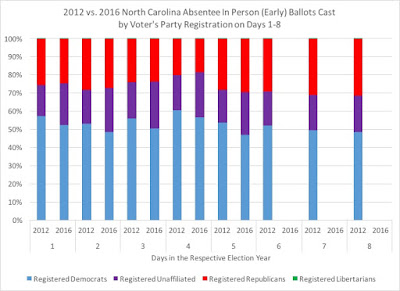 The very interesting patterns is the substantial increase in registered unaffiliated voters, who are turning out in in-person voting (in 2012, they generally tended to wait until Election Day to cast a ballot).

North Carolina politics is still dominated by racial politics, and you can see the differences among party registration with racial classifications of voters in the next two graphs.

First, the cumulative total percentages by race within party registration and the total in-person ballots: 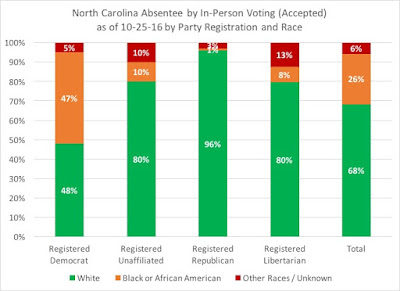 The total percentages indicate that there are fewer black/African-American voters utilizing early in-person voting. This could be expected, due to Obama not being at the top of the ticket.

One can see this trend in the daily percentages comparisons to 2012 by race: 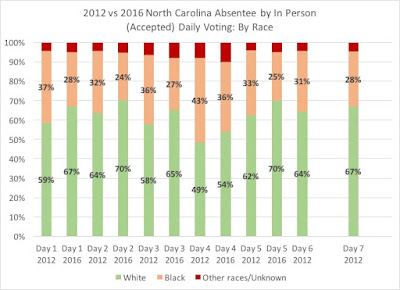 Much is being made of gender in voting--the next graph gives a sense of the ballots coming from female and male voters in North Carolina's in-person voting by party registration: 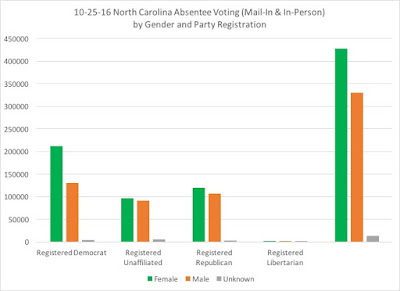 In looking at the voting methods and registration of the current in-person early voters, the next graph presents if the voter was registered in 2012 and, if so, what their voting method was: 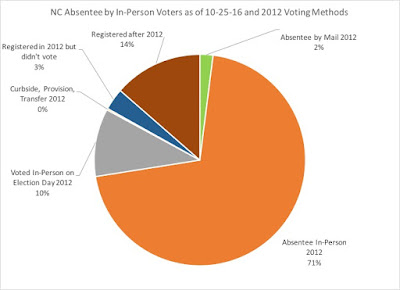 North Carolina politics is becoming deeply divided between urban and rural interests, and we see the pattern that urban areas are dominating in in-person voting patterns as expected, with a dominate majority of urban ballots coming from registered Democrats. 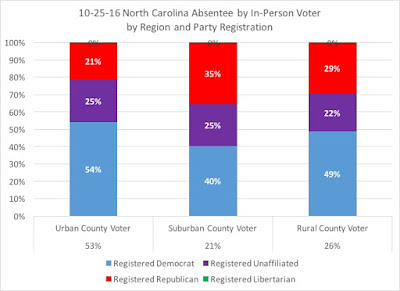 Another key aspect to North Carolina voting patterns is the influence of non-native voters to the state and their impact, which, so far, is a majority of the in-person votes coming from voters who identified a state outside of North Carolina as their birth state. 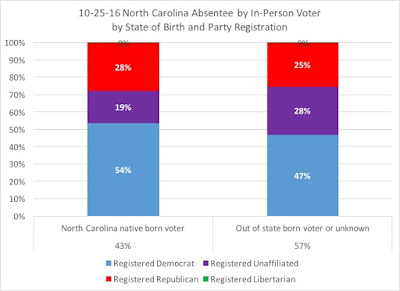 Finally, a generation change is occurring in North Carolina, but so far, Baby Boomers are the plurality of in-person early voters: 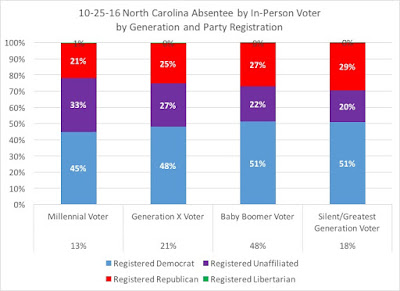 Later today (when I find the time in between meetings and class), I'll post some numbers regarding the mail-in ballots and the trends there.

Updated 10:00 AM on Oct. 25, 2016: while mail-in ballots are shrinking in their percentages of overall absentee ballots, some interesting trends are developing among this voting method.

Of the over 190,000 mail-in ballots requested and sent out so far, nearly 76,000 have been returned and accepted for ballots cast on November 8, for an acceptance rate of 40 percent. 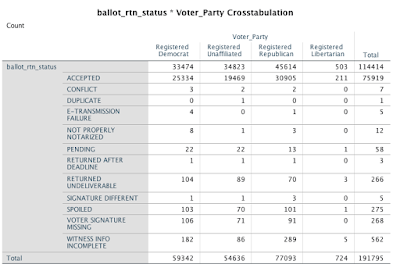 For the returned and accepted ballots, the party breakdown is 41 percent Republican, 33 percent Democratic, and 26 percent unaffiliated. 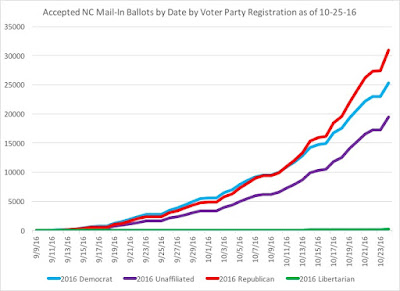 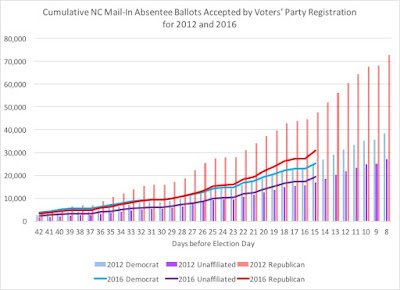 Finally, the division between the 2016 mail-in voter and, if they were registered in 2012 and voted, is: 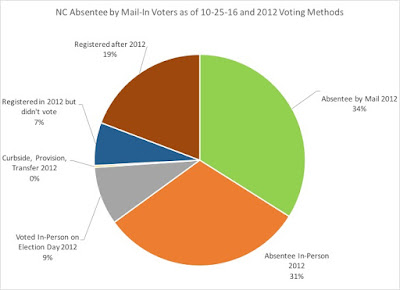