Some Thoughts about 2022 Election's Aftermath in North Carolina

As most of my colleagues are probably operating on (lack of sleep and significant sized mugs of caffeine), I decided to take the post-election stab (as Chris Cooper did yesterday for Election Day thoughts) and share some surprises, not-surprises, and things to think about as we further digest and analyze this year's mid-term election.

Nationally: It Was A Much Better Night for Democrats in the Expected "Republican Wave"

Classic research on mid-term elections tell political scientists and the general public that the president's party will suffer at the polls in terms of congressional seats during a mid-term election.

And indeed, that classic mid-term fundamental played itself in what we know so far (as of 11 AM on Wednesday, Nov. 9): Republicans appear to have picked up enough seats (at least 218) to capture majority control of the U.S. House.

The U.S. Senate is still up for grabs, and looks like even if Pennsylvania and Nevada switch sides of the political aisle, the nation will take a midnight train to Georgia's run-off election in early December to truly decide the fate of the upper chamber's majority control.

But in terms of the classic mid-term fundamental, President Biden's 44 percent job approval wasn't the anchor dragging the Democrats down in a number of key races, as expected.

In looking at the mid-term elections to compare the president's approval ratings against the gain/loss of congressional seats (both US House & Senate), Biden's approval put him on par with Trump's 2018 and Obama's 2010 levels, but Biden appears to have dodged the bullet when it comes to the loss of seats. 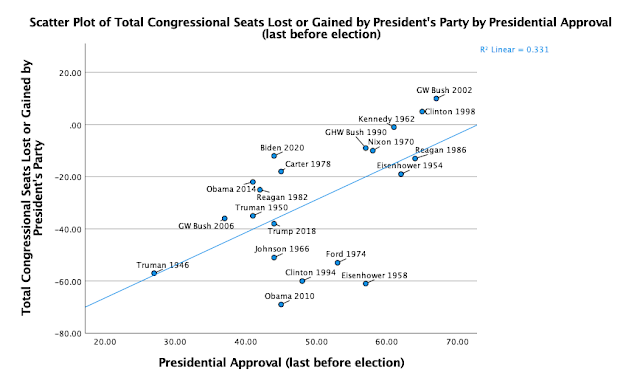 If you had told me "Biden's sitting at 43-44 percent approval," then by the above matrix, I'd say, well expect a loss of congressional seats to the tune of 20-40, at least. But if the predictive majority for the Republicans is at 224 (a pick up of 12 seats, with a majority of 6 seats, based on the New York Times estimates), then it looks like the best of all scenarios, barring the one where Democrats kept majority control.

For North Carolina Democrats, they have to be pleased that the most competitive U.S. House seat, the Raleigh-Johnston County 13th District, held to its basic 2020 dynamics, as it did most of the congressional districts playing out to their past performance levels (based on the Big 3 2020 Two-Party Election Results) 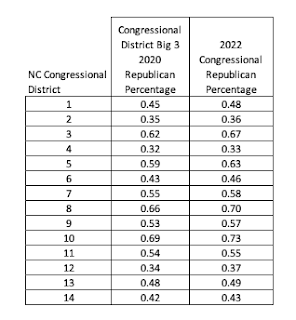 Now, what does this mean for the divided government control for the next two years? In two words: aggressive oversight. Re-elected Republican Dan Bishop noted to a reporter on Election evening that he is thinking of joining the House Oversight Committee, where partisan and deep investigations by the legislature will begin of the Biden administration.

But before Republicans begin their colonoscopic oversight, they have to resolve a more pressing question: is Kevin McCarthy the next speaker and party leader of a majority party with only a potential six seat cushion, and filled with a conference that has a significant MAGA/Freedom Caucus wing that will test any leader's patience.

The palace intrigue behind this speaker's race could be one to watch, and Democrats will have the luxury of being the bomb-throwers to the new majority, as they experienced from the other side of the aisle over the past few years.

In NC: The Political Past Can Really Tell Us About the Present

With a Republican advantage in the mid-term electorate, Ted Budd's county-level percentages match up almost perfectly to how the county's Republican percentage of the 2020 "Big 3 Elections" (US president, US Senate, and NC Governor's contest).

The below scatter plot of the 2020 Big 3 Republican percentage against the unofficial results for Budd's performance shows that North Carolina county voting patterns are remarkable consistent from one election to the next. 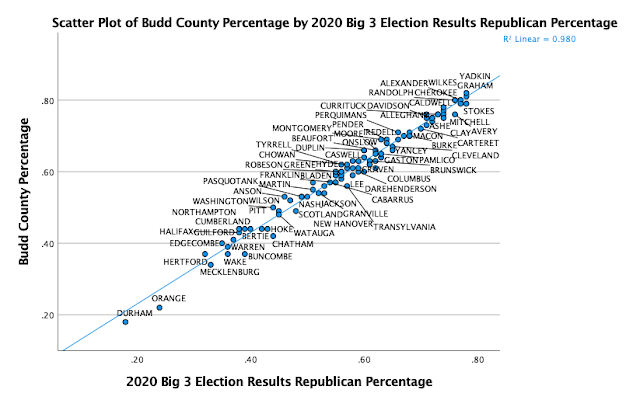 And if you take 2022's U.S. House contests in the state and match them against their 2020 "Big 3 Election" Republican results, you see a very similar close relationship between the two. 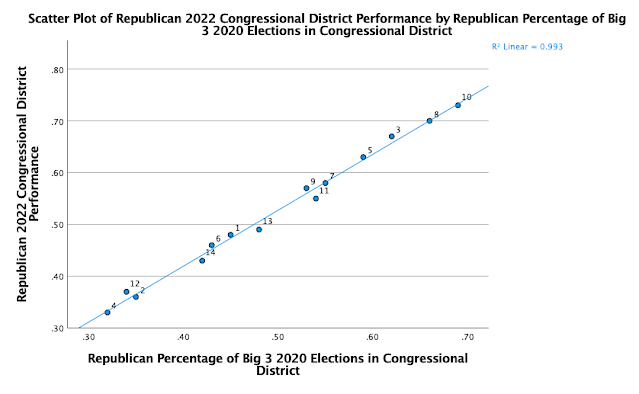 What this says to me is that, like much of the nation, North Carolina voters have become truly reliable partisan voters, and that our state's politics (and national politics) are very calcified in its behavior, as documented in the new book analyzing the 2020 election, "The Bitter End," by a team of respected political scientists.

I will await any final evaluative analysis on this trend until we get the final certified election results (happening with the canvassing of the 100 counties and the state certification), the precinct-level election results, and the voter history dynamic, but my suspicion is that North Carolina's voting patterns have calcified, or hardened into intense and consistent partisan loyalty with the electorate. And if anything, perhaps the hardening has become even more extreme.

In taking 2018's mid-term election results (and here, I combined all 13 congressional district results by vote methods to make a "general" state-wide dynamic) and compared this year's 2022 U.S. Senate results to see how North Carolina voters used their vote methods to play out a competitive state. 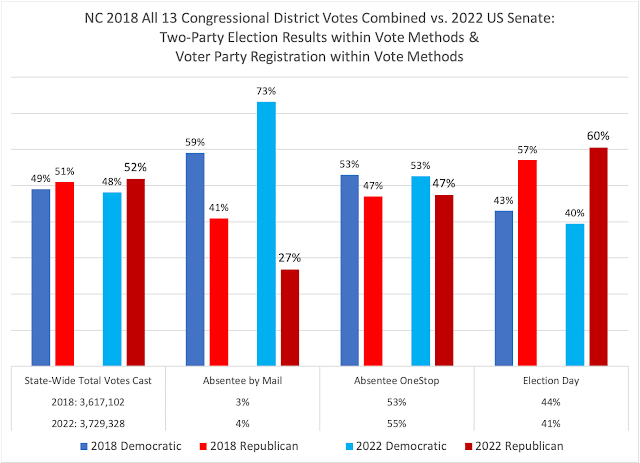 But with the majority of votes coming during in-person early voting in both years (53 percent in 2018, 55 percent this year), the competitiveness but slight Democratic edge gives way to the Republican flood of votes on Election Day. The Republican 'wave' was again on Election Day in this state.

When we get the voter history data file, we can find out the percentages of party registration for each vote method, and that will give us a much better dynamic. But the trends continue the same in North Carolina, it appears.

NC Republicans Had a Very Good Night, But Just Not as Great As They Wanted

Republicans were confident that the mid-term fundamentals would play to their advantage in the U.S. Senate race (as expected), and with the exception of the 13th Congressional District, won handily the U.S. House races expected for them.

But it was beyond the federal races that Republicans were seeking the wave to crash through, with a two-fold strategy: supermajorities in the General Assembly and control of the state supreme court. They got two out of three: a state senate super-majority and both seats on the state's highest court, but came one district short of claiming super-majority status in the state house.

This gives Democrats a bit of an exhale relief for the governor to wield his veto pen and, with party unity and loyalty within the House Democrats, keep the Republican majorities from overriding his legislative rejections. Of course, some Republicans are already talking about 'picking off' some Democrats to switch parties. It has happened before in NC legislative politics, but the intensity of partisanship is at a new level nowadays.

Now when it comes to one of the Republican's major priorities next year, tone that he governor won't have any say in, is redistricting the congressional districts in 2023. Pending the U.S. Supreme Court's case of Harper v. Moore and the decision regarding the independent state legislative doctrine, the Republican majorities will seek to carve up the current 7-7 U.S. House delegation into a more favorable light, and that light will be shaded heavily red.

And with the two critical seats on the NC Supreme Court, future litigation at the state level (if sanctioned by the nation's highest court) will end up before favorable partisan judicial review, and likely an overturning of the previous state court decision declaring partisan gerrymandering as unconstitutional.

What Didn't Have a Good Night: NC's Voter Turnout

Perhaps I'm being a bit harsh in the above sub-header, but most of us were expecting a bump-up from 2018's mid-term turnout rate of 53 percent for this year, thanks to what was a competitive U.S. Senate race all throughout the cycle and numerous competitive legislative district races.

In the end, it looks like barely half of North Carolina's 7.4 million registered voters had their voices heard in the election by casting ballots. And we'll again need to await the voter history data file to see what that electorate ultimately looked like. In the (Initial Assessment) End, What Does 2022's Mid-Term Election Tell Us?

First, both North Carolina and the nation continues its polarized politics: party loyalty among the voters results in another closely divided legislative branch, this time with divided government.

Second, with divided government comes intensified partisanship, increased negativism and antagonism, and the potential inability to address important policy issues without one side 'going their own way.'

Third, at the state level, it could be a bookend environment that Governor Roy Cooper found himself in for the first few years of his first term: locking horns with the Republican General Assembly, seeking to combat the conservative policies pushed by the legislature, and seeing his final two years in something more than "lame duck status."

For North Carolina Republicans, 2022 furthers their march in putting their stamp on North Carolina state government, at least for the foreseeable future. And with the pending decision in the U.S. Supreme Court, they could aid their fellow partisan brethren at the national level with wiping out an evenly divided U.S. House delegation next and stack the partisan deck to their favor.

In other words, and with the start of a second pot of tea to fuel me through the rest of the day, it's the politics of what we have come to expect in the Old North State.