The Supreme Court is Wildly Out of Touch with North Carolinians

Last week, the Supreme Court of the United States began issuing its most controversial decisions of the 2021-2022 term. They do this every year around the end of June into early July, which is traditionally their 'end of the term' before going into their “vacation” until the 2022-2023 term starts on the first Monday in October. (During this break, justices do some work of reviewing petitions and preparing for the next term. However, they are not nearly as active as during the term, such as hearing oral arguments and releasing opinions, so that they can disappear to Austria, if they like.)

For people who study and teach on the Court, like Michael Bitzer and I do, words cannot adequately express how unprecedented and radical last week’s decisions were. We are used to teaching students about how the Court relies on stare decisis (literally “to stand by things decided”) in order to promote stability and consistency in law. We explain how justices must use sound legal reasoning in order for their decisions to be respected and upheld by the other branches of government, and ultimately by the public at large.

Last week’s decisions took a giant wrecking ball to basically every lecture I have on the Supreme Court, because they illuminate how none of these things are actually true. Justices don't rely on stare decisis unless it suits them. Justices don't have to use sound legal reasoning because, honestly, who’s going to stop them? They are the final say on the Constitution, after all.

But should they be?

After all, the Constitution says nothing about judicial review. The Supreme Court took this power for themselves all the way back in 1803, and somehow are still permitted to keep it. This idea is even more hilarious juxtaposed next to the current Court’s insistence that we should only follow governmental institutions and processes that the Founding Fathers would have wanted, since at least one of the Founding Fathers promised that the Court would never have this much power.

Additionally--and perhaps most importantly--some of the most recent Supreme Court decisions demonstrate how wildly out of step they are with the views of most North Carolinians.

If you’ve heard of any of the decisions of this term, it’s almost certainly the Dobbs decision. That’s because it overturned the legal precedent of Roe v. Wade (1973) and the case that reaffirmed it, Planned Parenthood v. Casey (1992). We have been waiting for the official version of this decision to come down ever since the draft version was leaked in early May, and it is just as devastating as pro-reproductive rights activists feared.

So what did the Court rule?

In a 6-3 vote, the Supreme Court held that the US Constitution does not confer a right to an abortion, saying that "The Constitution makes no reference to abortion, and no such right is implicitly protected by any constitutional provision." Therefore, the precedents of Roe and Casey are overturned, and the right to decide what to do on abortion falls to each individual state. The decision also implies that there is no right to privacy when it comes to "a woman’s decision whether or not to terminate her pregnancy"--and remember, the word “privacy” does not appear in the Constitution either--but does not come out and say that explicitly.

What do North Carolinians think?

As we found in the April 2022 Meredith Poll, only 10 percent of North Carolinians favor making abortion totally illegal. Everyone else believes abortion should be legal in at least some cases, with the most chosen response to “maintain the spirit of Roe v. Wade” at 27 percent. The second most chosen response was to expand Roe at 25.6 percent.

This indicates that the majority of North Carolinians were fine with the way things were prior to the Dobbs decision, because the plurality liked Roe as it was and the second largest group of respondents could fight to have Roe expanded in the state of North Carolina via the General Assembly, as several other states have done.

As the chart below shows, Republicans were the group most unhappy with Roe. However, their preferred option is not to make abortion totally illegal, but instead to limit it by either making abortion illegal earlier in the pregnancy or by limiting abortion to only cases of rape, incest, or threatening the health of the mother. These limitations to Roe could have been accomplished without overturning Roe completely, because Planned Parenthood v. Casey described situations in which states could constitutionally limit abortion. 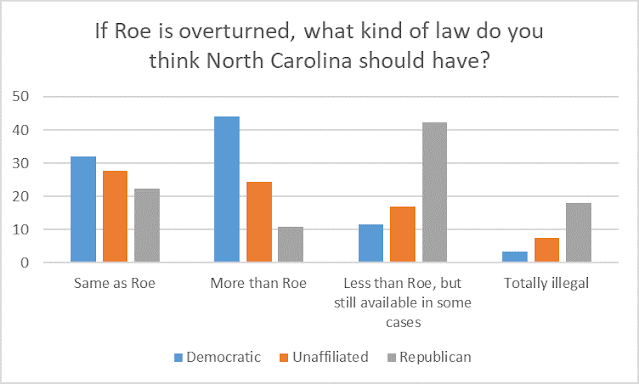 Again, the plurality of North Carolinians were fine with Roe, which alone suggests it shouldn’t have been overturned. This result is even more convincing when paired with the pre-Dobbs reality that those who wanted a little more or a little less than Roe could accomplish their goals via their state legislature.

As Chief Justice John Roberts wrote in his concurrence to Dobbs, the Court did not have to go as far as they did, and probably should not have done so if they want their decisions respected by the public: “The Court’s decision to overrule Roe and Casey is a serious jolt to the legal system—regardless of how you view those cases. A narrower decision rejecting the misguided viability line would be markedly less unsettling, and nothing more is needed to decide this case.”

The word on the street (read: law Twitter) is that the Court held onto this decision and released it later than was originally scheduled due to the tragedy in Uvalde, TX where a shooter with an AR-15 killed several elementary students and their teachers. Evidently, the justices felt that this decision was radical enough that it shouldn’t be issued directly following a mass shooting, but not so radical that they should change anything in it to, I don’t know, help ensure that future mass shootings are harder to pull off?

So what did the Court rule?

In another 6-3 decision, the Court held that an over 100-year old New York law was unconstitutional because it required that citizens demonstrate a “special need” to carry a handgun in public, which, according to the Court's majority, violates the 2nd Amendment right to bear arms and the 14th Amendment's requirement of equal protection of the laws.

Similar to Dobbs, the Court went beyond the actual question at hand (was the New York law constitutional?) by declaring that all laws related to guns must be examined under strict scrutiny, which is the most exacting level of review by the courts. This will make passing any kind of gun regulation much, much harder.

What do North Carolinians think? 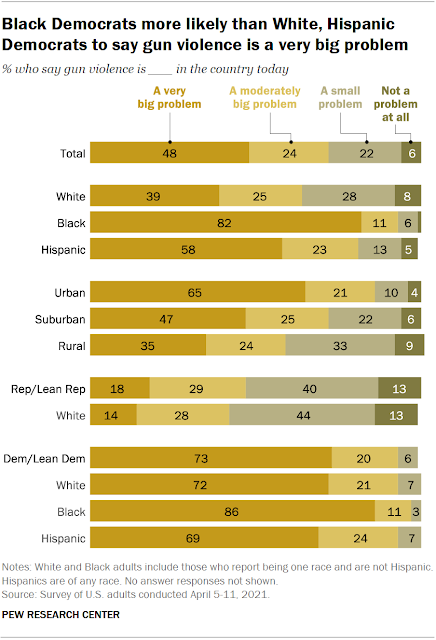 In a Meredith Poll conducted in October 2019, a full 76 percent of North Carolinians would support a law that would take weapons away from someone that a judge has determined is dangerous to themselves or others. Nearly four-out-of-ten, or 38.6 percent, of North Carolinians would be more likely to vote for a candidate who supported an assault weapon buyback program, while 25.3 percent would be less likely to vote for that candidate.

The chart below shows that the likelihood of voting for a candidate who would implement a gun regulation is conditioned strongly on whether the respondent owns guns or not. However, about one-third of both gun owners and non-gun owners said that this position would make no difference in whether they voted for the candidate in question, suggesting that this might not be the top priority for them. As Justice Breyer notes in his dissent to Bruen, already in 2022 there have been 277 mass shootings, which is more than one per day. The United States is beaten only by Brazil in the number of gun deaths each year (and these two are enormous outliers among the rest of the world). This case concerned only one regulation that had been put in place to limit gun violence, but many US states have passed other common-sense gun regulations, like universal background checks and limitations on high-capacity magazines, and the federal government banned military-style weapons from 1994-2004. All of these regulations are evidently now questionable, according to this Court, even though each of these regulations enjoys fairly widespread support among the American public.

These two decisions not only mean that a few long-settled laws in the United States are now overturned. They also paint a picture of a Supreme Court that holds views entirely different from the average American citizen, which is damning enough even without going through all the reasons why these decisions, together, are logically inconsistent (very quickly: how can society not have abortion, because it isn't explicitly mentioned in the Constitution, but can have unlimited bullets, which also aren't mentioned and were not even invented yet?).

The main point is this: if the definition of a democracy is that The People have the final say, can we still call ourselves a democracy when six unelected, unrepresentative judges are the ones having the final say?

Dr. Whitney Ross Manzo is an associate professor of political science at Meredith College. She tweets at @whitneymnz.