Does Party Competitiveness in NC's Primaries Drive Unaffiliated Voters One Way or the Other?

With the holidays looming, Cheri Beasley's campaign for the Democratic nomination for U.S. Senate got an early Christmas gift, coming in the form of fellow competitor Jeff Jackson's suspension of his campaign and endorsement yesterday.

And with the primary election now two months later, thanks to the state gerrymandering lawsuit, Beasley's campaign gets to firm up her general campaign operations, including building a warchest for what will likely be one of the most expensive U.S. Senate races again in the nation. Republicans, however, will have to wait until May before what appears to be a bitter and brutal primary fight will be resolved.

And while most of the focus will be on the candidates and their strategies towards May and ultimately November, there's one other important group of individuals to consider: the voters. As my colleagues and I have been looking at the rise of North Carolina's unaffiliated registered voter, we have the data collected to see who has shown up in past primaries, especially by voter party registration or, in the case of the unaffiliated voter, lack thereof.

For the 2008 to 2020 primary elections, I collected each of the presidential and mid-term voter history data, which provides both the voter's party registration and the party primary selected. As a reminder, only partisan registered voters are allowed to participate in their primary, but unaffiliated registered voters can select either the Democratic or Republican primary ballot. 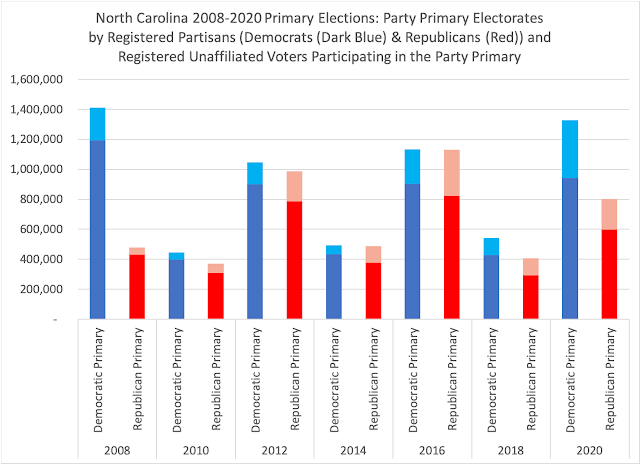 For most of the primary elections since 2008, the total number of voters casting ballots have been fairly equal between the two parties, with some notable exceptions. In 2008's May primary, the historic Democratic presidential nomination battle between Obama and Clinton attracted significant attention, while the Republican nomination had been settled for McCain. In 2018's blue-moon election cycle, which didn't have a major state-wide race on the ballot, the Democratic wave year was evident with 135,000 more voters in that party's primary than in the Republican primary. Two years later, with North Carolina's primary being on Super Tuesday following the South Carolina Democratic primary, over half-a-million more voters participated in the Democratic primary over the Republican primary.
Beyond the numbers, however, we see distinct trends in the percentages of registered partisans versus unaffiliated voters in the past seven major election cycles, as evident by the next chart: 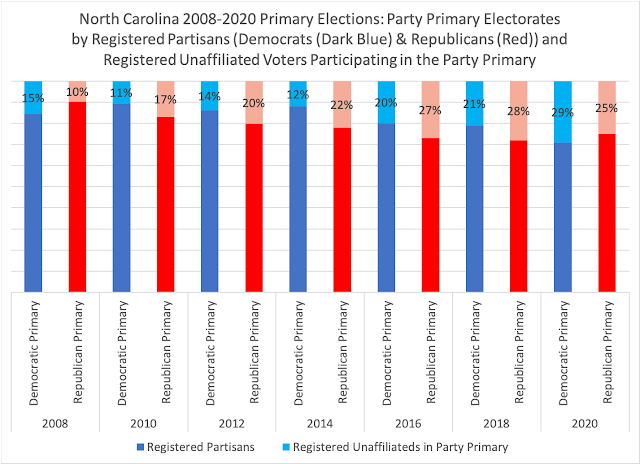 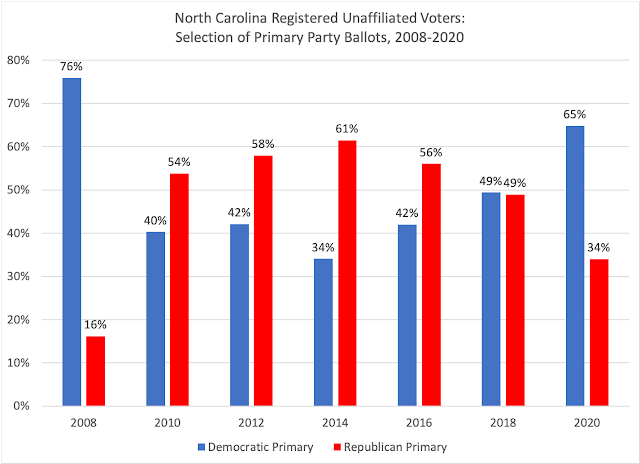 Between 2010 and 2016, significant majorities of unaffiliated voters who cast primary ballots chose the Republican contests. This shouldn't be a surprise, necessarily, because those same elections tended to have competitive GOP primaries (2010's Republican wave year dynamics; 2012 and 2016 saw open-seat Republican presidential primary contests, and 2014 was the U.S. Senate contest to take on Democratic incumbent U.S. Senator Kay Hagan).

With the 2022 path cleared for the Democrats (from what we can tell right now, six months out from the primary) for the U.S. Senate primary contest, the unaffiliated voter choice for primaries to vote in will likely be in the GOP primary, with its competitive U.S. Senate contest. It's expected that registered unaffiliated voters may become the largest group of registered North Carolina voters by the time of 2022's primary election, using a conservative comparable percentage increase over 2021 to forecast 2022 numbers, as evident in this chart: 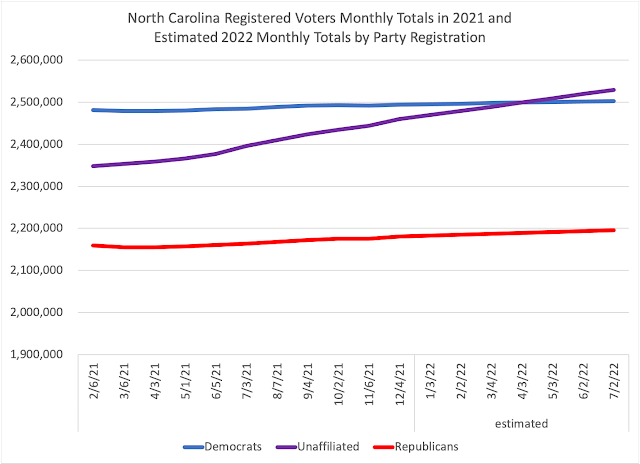 If current trends hold (or increase a bit), registered unaffiliated voters will surpass registered Democrats to become the plurality registration group among the 7 million plus North Carolina voters by April 2022. A month later, we'll have to see how many of them show up to participate in one of the two primaries, but the data suggests that they may see the GOP primary as the more interesting of the two.
--------------------
Dr. Michael Bitzer holds the Leonard Chair of Political Science at Catawba College, where he is a professor of politics and history and author of the Redistricting and Gerrymandering in North Carolina: Battlelines in the Tar Heel State. He tweets at @BowTiePolitics.
By OldNorthStatePolitics.com - December 17, 2021