As the U.S. Census Bureau gets ready to release the data for redistricting activities in the states, a sense of what the "ground" in North Carolina politics looks like going into the "most political activity in American politics" would shine some light on the future maps and their designs.

North Carolina redistricting efforts are centered around a core set of principles, often referred to as the Stephenson criteria. Written by then Chief Justice I. Beverly Lake of the NC Supreme Court (a summary of the full criteria can be found in his majority opinion, starting on page 42), one of the key components is the "whole county" provision of the state constitution, which holds that for both state senate and house districts, "No county shall be divided in the formation..." of districts (Sections 3 & 5, sub-section 3 of Article II).

Therefore, when legislators begin their work, they will start with counties that can sustain legislative districts within themselves, and then work towards "clustering" other counties to develop districts as well (a good explanation of this principle is found here).

But beyond the counties, one can dive even deeper into political geography through precincts (or voting tabulation districts ("VTDs")), which are the foundational geographic areas for election administration and where voters (who vote on Election Day) go to a central site to cast their ballots.

Generally, redistricting efforts try to keep precincts intact as well, namely to help election administrators create the ballots for voters (if a precinct is divided into two, or more, legislative districts, that requires the ballots to be more carefully created for voters to cast votes for the right office).

While many political analysts utilize county-level election returns to study a state's political behavior, I've become more focused on precinct-level data (such as returns, voter registration, etc.) due to some advantages. One, the county-level information may mask some serious differences within a geographic area, especially when one looks at urbanized areas (those 'central-cities' like Raleigh and Charlotte) versus the 'urban suburbs' (those areas outside of Charlotte and Raleigh's city limits, but inside the urban county).

This 'political regions' dynamic shows some distinct differences in election performances, as shown in the following chart for the 2016 and 2020 presidential (two-party) election results. 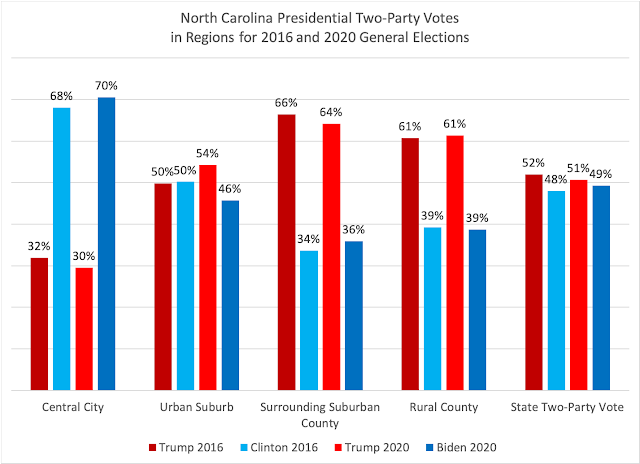 Compared to 2016's election results, North Carolina's central cities went even more Democratic, to the tune of a 70-30 split. Among rural counties, the Republican advantage held at 61-39, the same as in 2016. But it was in the two suburbs--the urban and surrounding counties--where some distinct differences emerged.

In 2016's election, the urban suburbs were split evenly for Clinton and Trump, but in 2020, Trump saw his vote share increase four percentage points to a 54-46 win over Biden. In the surrounding suburban counties, which are the most Republican areas of the state, Biden managed to slightly increase his performance over what Clinton did in 2016, with a 64-36 Republican split compared to a two-to-one Trump advantage in 2016.

Is Polarization Evident in Precincts?

Beyond the overall election results, one can also categorize the precincts for the four political regions into levels of competitiveness/polarization (for sake of clarity, I call this approach 'precinct polarization').

Each precinct's election results can be put into different categories:

Taking the various precincts across the state and classifying each precinct based on its two-party presidential returns, we see a unique distribution of precinct polarization types across North Carolina: 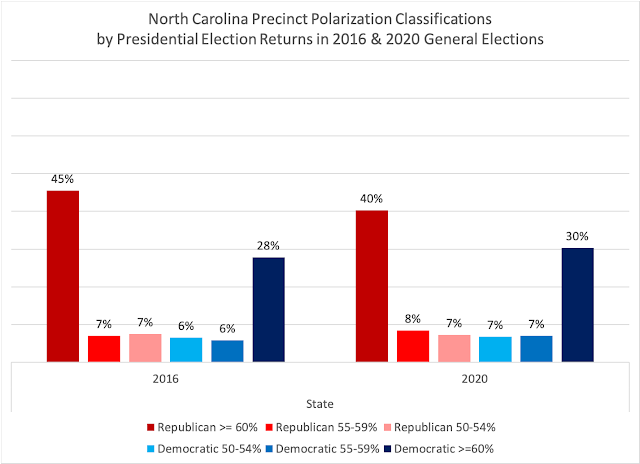 In 2016's election, 73 percent--or nearly three-quarters--of North Carolina's precincts were "solid" or highly polarized precincts, in that they voted 60 percent or greater for Trump (45 percent of the precincts) or Clinton (28 percent). The competitive precincts--those between 50-54 percent for either Trump or Clinton--represent only 13 percent of the state's precincts.

Out of this, you could consider that in 2016, 87 percent of the precincts went for one of the two presidential candidates by 55 percent or more.

In comparison, the number and percentage of "highly polarized" precincts in 2020's election decreased slightly, but only slightly, down to 70 percent. Trump saw fewer "strong GOP" precincts (40 percent) than he did four years earlier, while Biden's "strong Democratic" precincts increased (to 30 percent).

But taking in the 55-59 percent precincts on both sides of the political divide, again we see that 85 percent of the state's precincts voted 55 percent or more for one of the two presidential candidates.

Only 15 percent of the precincts across the state were "competitive" in nature.

The first big take-away for me is that North Carolina is highly competitive, but you have to dig deep to find where those competitive precincts are. The other key thing that stands out to me is that North Carolina voters, whether deliberately or not, seem to have 'sorted' themselves, a potentially controversial dynamic that may lend itself to support the "big sort" thesis of American politics. There are those political scientists that contend the sorting and polarized political geography isn't as evident as one would think in our politics, but that's for another blog post to debate.

I then analyzed each of the four political regions to classify its precincts into levels of polarization, with a comparison first between urban/central cities to rural counties (the great 'urban-rural' divide): 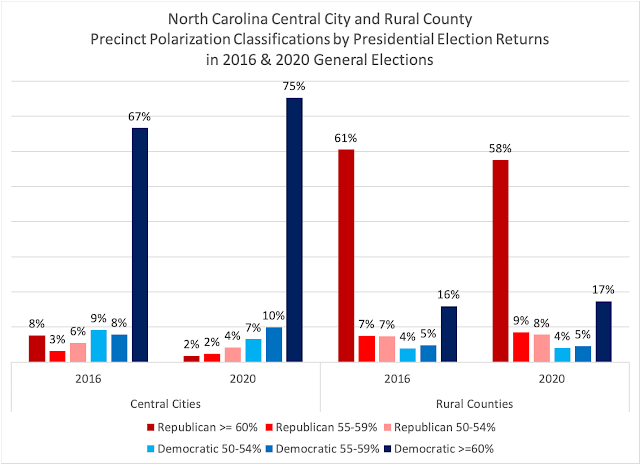 As demonstrated in the "Central Cities" side of the above chart, these urban areas went even more strongly Democratic (as the overall election results demonstrate), but the difference between 2016 and 2020 is stark in terms of the 'types' of precincts that moved.

On the right side of the chart, over two-thirds (68 percent) of rural county precincts in 2016 went for Trump by 55 percent or more, compared to two-out-of-ten precincts doing the same for Clinton. In 2020, those percentages held the same, with a slight dip among "strong" GOP precincts into "lean" GOP status.

Next, for the two types of suburbs, we see where the potential 'competitiveness' of North Carolina may reside. 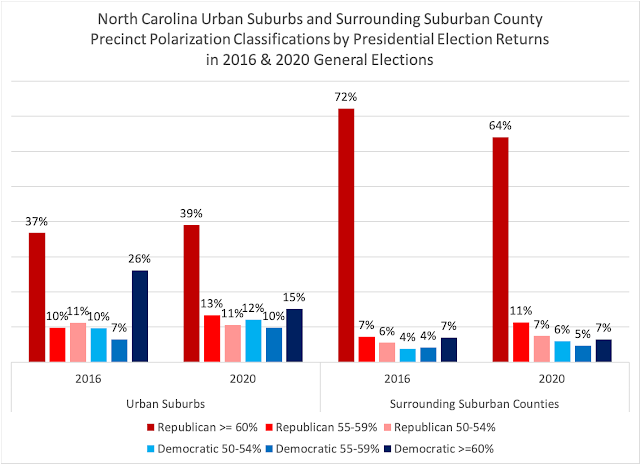 In the urban suburbs, the distribution of polarized precincts is slightly more 'balanced,' meaning there isn't a towering spike at one end or the other for both 2016 and 2020. Trump's improved performance in 2020's urban suburbs can be seen in slight increases in both strong and lean GOP precincts, while Biden lost ground regarding strong and lean Democratic precincts.

In both elections, over 20 percent of the urban suburb precincts were "competitive" (again, one party getting 50-54 percent), which is the highest number of competitive precincts in the state's political regions.

As a final chart, I brought together all four political regions into their precinct polarization: 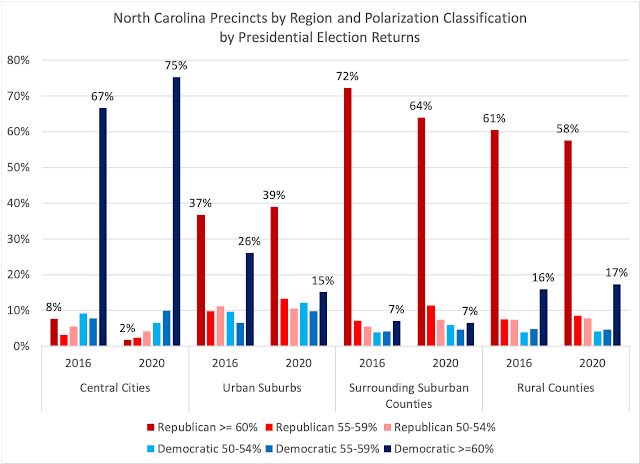 The "spikes" of 60 percent or greater for one party (the polarized precincts) in three regions is something that truly stands out, with only the urban suburbs presenting a "more balanced," but still an upside bell curve, to the distribution of its precincts in polarization. This dynamic of political geography is certainly something to watch more of, and further analysis (such as the demographics of these precincts in the regions) will explored in future blog posts.

So what does this potentially mean for redistricting?

As a reminder, redistricting is the process of redrawing legislative districts--congressional, state house, and state senate--to equalize population changes in the geographic areas following the census count, but it also has a strong political dynamic, which one scholar of the subject has labeled "the most political activity in American politics."

In North Carolina, the Republican-controlled General Assembly will control the map drawing process (the governor has no say in the matter), but as I note in a forthcoming book, the state courts have been, and will likely be, "interested parties" to the process, if history is any indication of what North Carolina redistricting goes through. But for the first iteration starting in a few months, it's likely the maps will favor Republicans in both congressional and state legislative seats.

Based on political geography and the past electoral dynamics at the precinct-level, it may not take much to create Republican-favored delegations to the U.S. House or the General Assembly. The question for this round of redistricting becomes, how much political/partisanship will be allowed in the map creation?

Back in 2019, a state court laid out the guidelines for approaching that kind of a question, but the question for this year's efforts will also center on the same question again. And with the political geography at play in North Carolina, the dynamic of intentional partisan gerrymandering versus what is already on the ground may be something to consider when the maps come forth.

Dr. Michael Bitzer holds the Leonard Chair of Political Science and is a professor of politics and history at Catawba College. He is the author of the forthcoming book, "Redistricting and Gerrymandering in North Carolina: Battlelines in the Tar Heel State," published by Palgrave, and tweets at @BowTiePolitics.