This week's memo from the North Carolina State Board of Elections (NCSBE) lays it out pretty clearly: “the Constitution and Green Party are no longer recognized political parties in North Carolina.”  As of January 27, 2021, neither party is listed listed on the voter registration application (h/t Gerry Cohen, the oracle of NC election law, for linking this on his Twitter account). Unless they can successfully re-qualify for ballot access before the February 22, 2021 meeting of the NCSBE (h/t to everybody's favorite Libertarian candidate, Sean Haugh for spelling this out clearly), members of both parties will have their party affiliation switched automatically to Unaffiliated.
The elimination of both parties wasn't done out of spite, but rather because neither party achieved "the required 2% of the total vote for their candidate for governor or for presidential electors in the 20202 general election” (see this piece from Danielle Battaglia for a good run-down on what happened).
Given the impending demise of both parties, it seems like as good a time as any to take a look at life and times of the Green and Constitution parties to see if it can teach us anything about the future of party registration in the Old North State.

The recognition of the Constitution and Green Parties was made possible by the "Electoral Freedom Act of 2017" (Senate Bill 656/SL 2017-2014), a law that, among other things, reduced the bar to become a recognized political party in NC. Like most consequential bills in the NC General Assembly, it was not a bipartisan bill, but rather one marked by partisan conflict. The initial vote was mostly along party lines (with Republicans in support and Democrats in opposition); Governor Cooper vetoed it, then his veto was overriden on a near party-line vote.
Once the Electoral Freedom Act made it into law, the writing was on the wall that the Green Party would soon be recognized as an official political party in North Carolina (see the clip from the N&O's Colin Campbell on March 27, 2018).

While the Green Party was indeed the first party to be recognized, the Constitution Party was recognized shortly thereafter.  See this clip from APs Emery Dalesio and Gary Robertson from May 17, 2018. 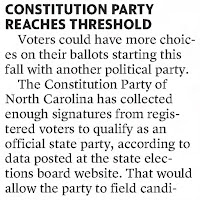 A Brief Demographic Description of Green and Constitution Party Members

In general, third party members are (much) younger than members of the two major parties in North Carolina. Moving from youngest to oldest, the average age of a Green Party member in North Carolina is 35, followed by 37 for Libertarians, 39 for Constitution Party, 45 for Unaffiliated registrants, 52 for Democrats and 53 for Republicans. The figure below, which shows the age distributions for each Party's registrants reinforces the same point, but with more detail. 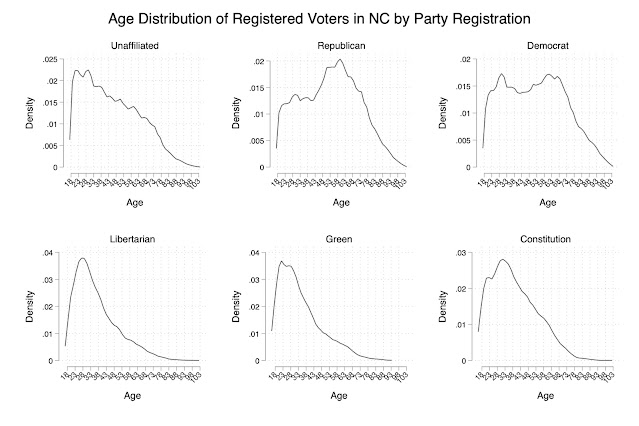 Putting it in Perspective

--------------------
Chris Cooper is the Madison Distinguished Professor of Political Science and Public Affairs at Western Carolina University. He tweets at @chriscooperwcu.