Combine the current totals of accepted absentee by mail ballots, of 556,365, and North Carolina has 12 percent of its 7.2 million registered voters already banking their ballots.

If we consider that we should see at least the same percentage of registered voter turnout as we did in 2016 (69 percent), that would put the total electorate at 5 million, and make the nearly 890,000 ballots banked so far at 18 percent.

A few charts to explain what we are seeing and what we can compare to just four years ago.

First, looking at the days out from Election Day, the 2016 daily totals for accepted absentee ballots, by both types, mail in and onestop/in-person, compared to 2020's first day totals for both vote methods. 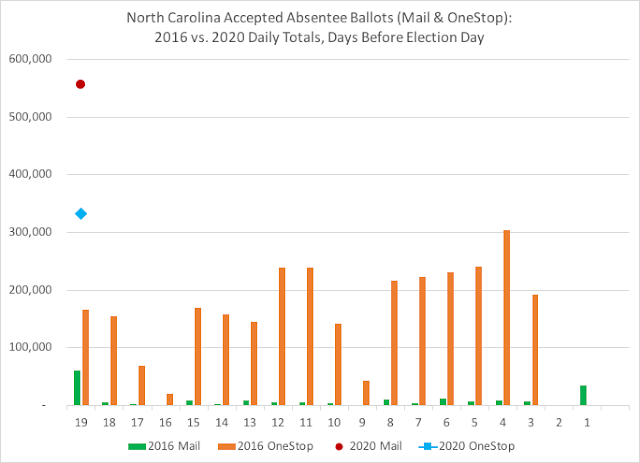 Next, to give a sense of the growth of absentee ballots in 2016, and where we are starting 2020 from in comparison: 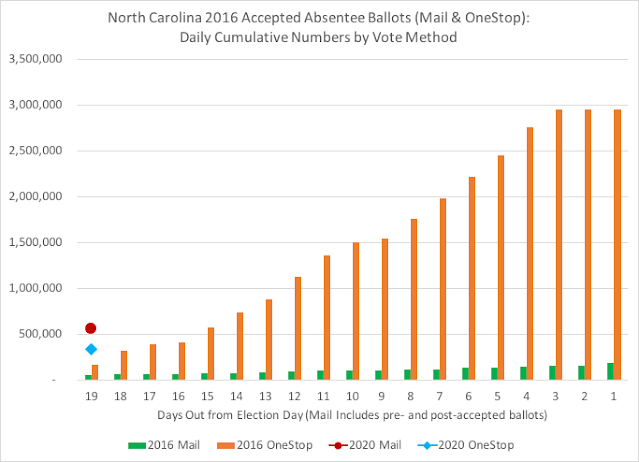 Nobody knows (and if they do, please e-mail me pronto) what the number of absentee voters will be in North Carolina. In 2016, absentee ballots made up two-thirds of all the ballots cast that year: by mail came in at 4 percent and onestop came in at 62 percent, with the remaining third coming on Election Day.

With 1.3 million requests for absentee by mail ballots and about 800,000 still outstanding, we could speculate that if the total number of ballots cast is 5 million (and I'm starting to think that may be a conservative baseline to use), and we see at least two-thirds, if not more, of those 5 million ballots come before Election Day, we could be looking at 3.3 million early ballots. But that's just a guess; again, I would not be surprised if 2020 brings even more before November 3.

Next, the party registration breakdowns for the two methods and all absentee accepted ballots so far: 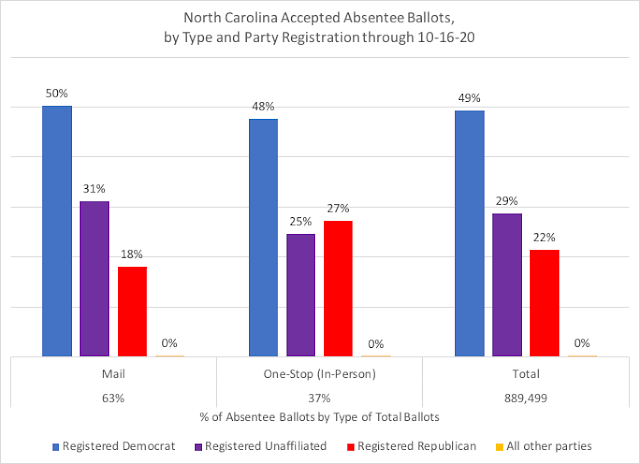 Registered Democrats continue to dominate the absentee by mail method, something Republicans generally have preferred and were either a majority (in 2008 and 2012) or a significant plurality (2016) in past mail-in ballots. Among yesterday's in-person ballots cast, it's not surprising that registered Democrats made up nearly half; voter enthusiasm among Democrats is at significantly high levels. What is interesting is the overall percentage attributed to registered unaffiliated voters, nearly 30 percent. I'll need to dig a little deeper into those numbers and see what dynamics we can glean from them. 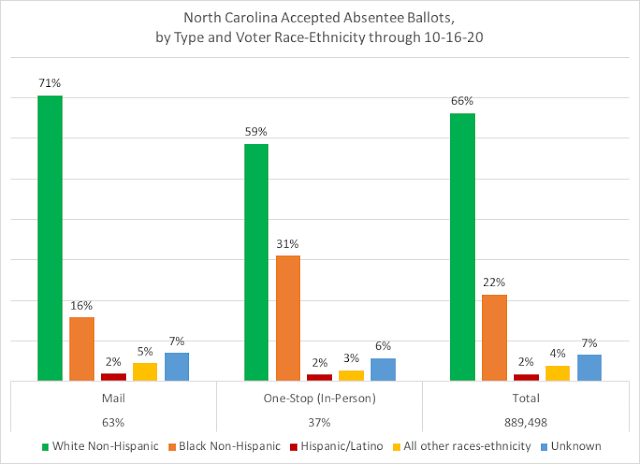 Black/African American voters are utilizing mail-in voting at a much higher percentage than they did four years ago (their overall percentage was just 8 percent of the total mail-in ballots in 2016; now, they are 16 percent), but their 31 percent of yesterday's initial in-person early voting is something that is quite notable, and needs to be watched as the early voting period marches along. At 22 percent overall of all absentee ballots, they are matching their percentage of overall registered voters.

By age and generations, we continue to see a skew towards older voters that is not surprising in early voting in North Carolina. Among all of the early ballots returned and accepted so far, the mean age is 59 years old, with registered Democrats at that age, registered Republicans older (nearly 63 years old), and registered unaffiliated voters younger (55 years old). 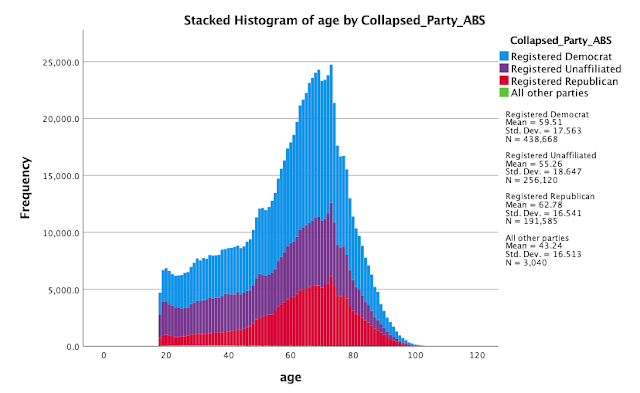 If you break the voters into generational cohorts (see the Pew Research Center's definition which I use), Boomer voters are nearly half of the total absentee ballots accepted so far. Voters under the age of 40--Millennials and Generation Z--are 17 percent. 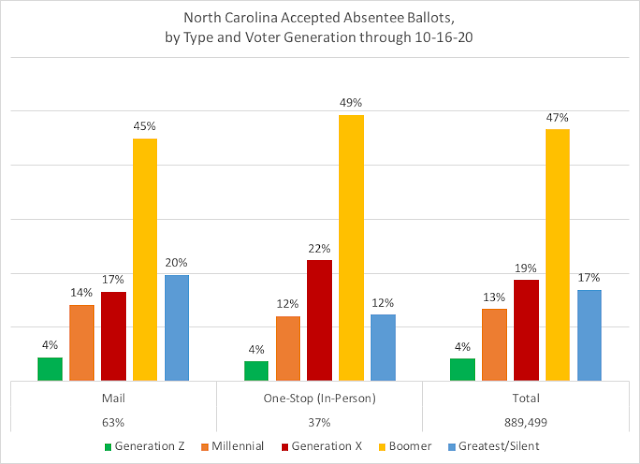 One of the important dynamics that I will be watching is the turnout rate for the generational cohorts. If 2020 is a kind of transformation election year, then voters under the age of 40 (who make up 36 percent of the total registered voter pool) should punch up to their potential political weight. We'll just have to wait and see if they do.

Finally, I am able to look at whether these 890,000 early voters voted four years ago, and if so their vote method, and if they didnt, when were they registered (either in 2016 and just didn't vote, or registered after 2016).

First, for the absentee by mail voters: 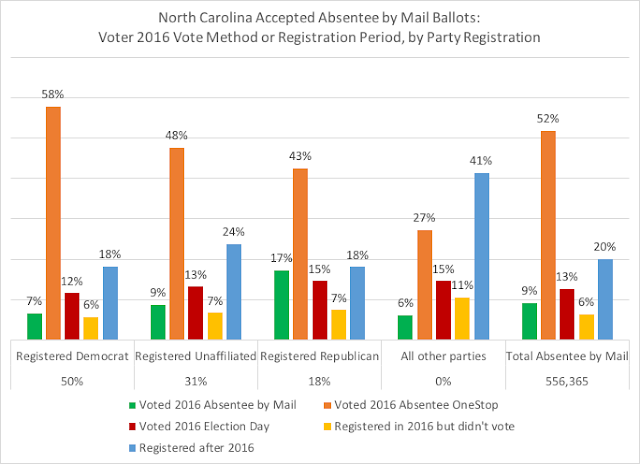 Over a quarter of this year's mail-in voters either didn't vote in 2016 but were registered, or registered after 2016's election.

When it comes to in-person voting (onestop), nearly three-fourths (72 percent) of the initial day voters used the same vote method as they did in 2016. 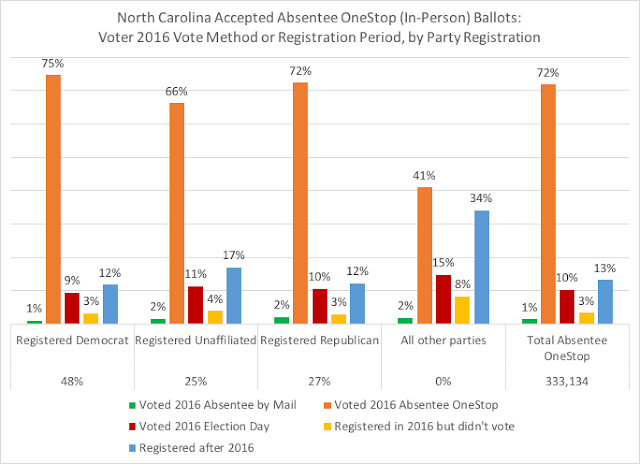 It will be interesting to watch this pattern play out as we get more days worth of data to see if 2016 early in-person voters repeat their vote method this year, and how many 'new voters' enter into this vote method as well.

Finally, combining the two absentee vote methods for the total pool of ballots cast and accepted so far: 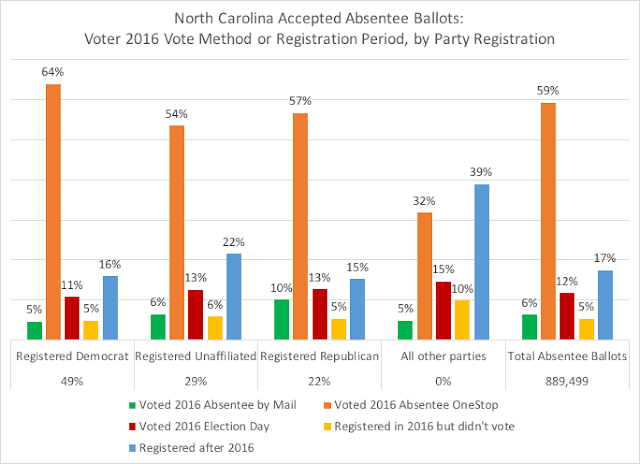 Overall, these numbers are simply astounding, and likely will continue to astound us as we move forward. Could we potentially see 70 to 80 percent of all the ballots cast done before Tuesday, November 3rd? Honestly, I wouldn't be surprised, but it would amaze me.

And as a reminder: these accepted ballots will be the first numbers that are released following the closure of the polls on election evening, so a massive amount of votes will be tabulated and ready to digest very shortly into the evening on November 3rd.

Maybe I should amend my first sentence of this blog piece to read: expect the unexpected, in ways that will blow your mind. And we still have over two weeks to go to November 3rd.