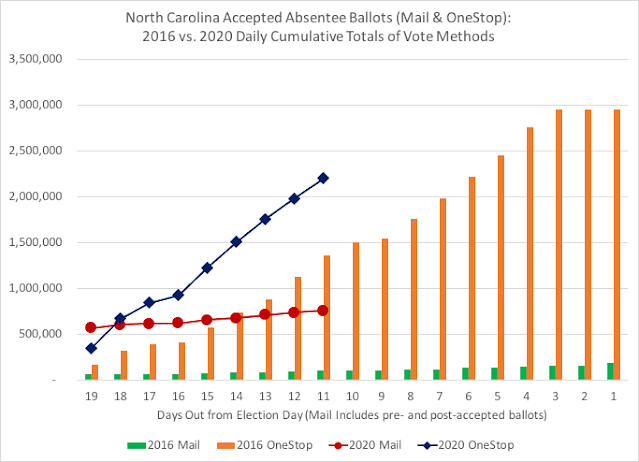 With three-quarters of a million absentee by mail ballots, North Carolina is nearly four times ahead of 2016's total absentee by mail ballots. And with 2.2 million absentee onestop (in-person) ballots cast, the state is about to reach its total in-person early votes cast (currently at 94 percent of the 2.9 million cast just four years ago).
And we have another week to go with early voting, ending on October 31.
The daily totals have started to slow in its pace, with the second Thursday and Friday numbers matching what was cast in 2016. What enabled the state to set its record numbers is the fact that by the initial day of in-person early voting, the absentee by mail ballots returned and accepted were beyond anything that anyone had imagined. Here's the daily totals for both absentee vote methods (by mail and onestop/in-person): 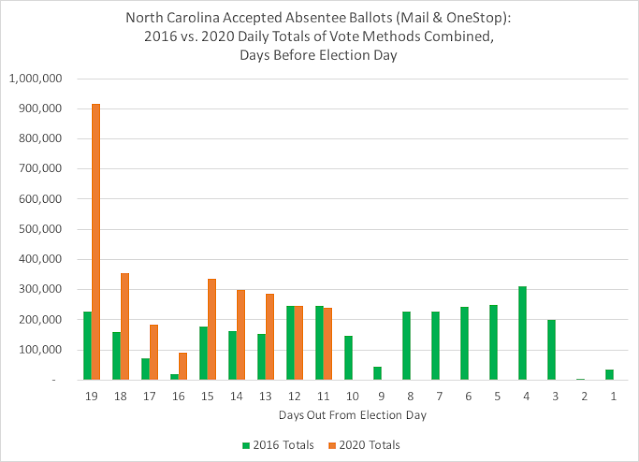 Isolating the two different vote methods, the second Thursday and Friday of early in-person voting has seen a slight decrease in total onestop ballots submitted as was done in 2016, but further revisions and processing by the counties may close that gap for the two days. 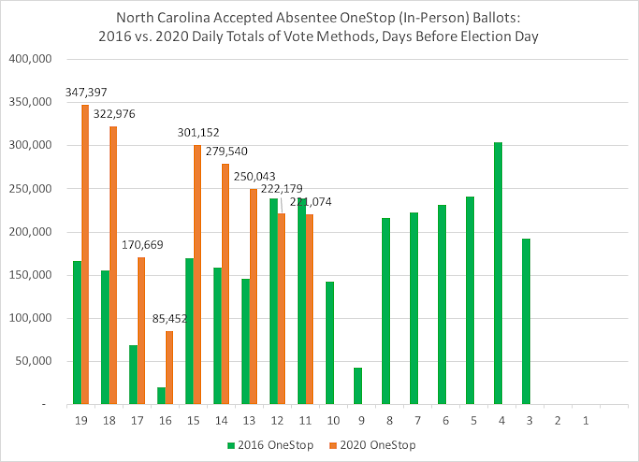 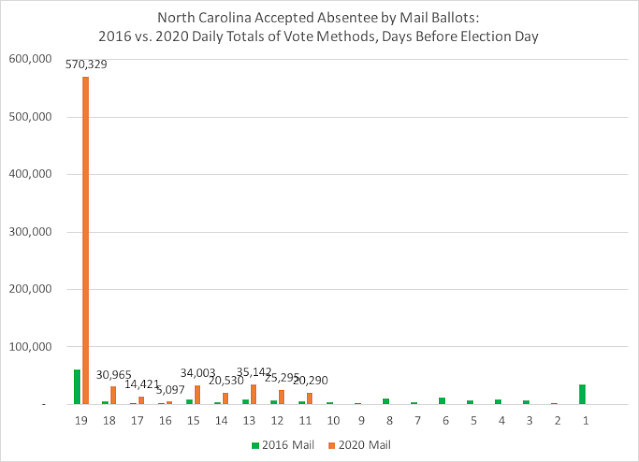 Many folks want to know "who is winning NC's early voting?", and they look to the party registration data to get a sense of things. But as any credible observer of North Carolina politics would caution, doing so presents its own risks: namely, the rise of the unaffiliated (but not likely the politically independent) voter and the lingering (but perhaps still present) phenomenon of North Carolina older (Boomer or Silent generations), white, typically male, rural or surrounding suburban county voters who are registered Democratic but are, in fact, Republican voters.
It's my thinking that new voters who register with one party over the other are party loyalists (what we in political science would describe as likely 'strong' partisan, or perhaps 'weak/not strong' partisan). For someone to register with one party today and yet support/vote for the opposition would take an amount of mental gymnastics/cognitive dissonance that I'm not sure I have enough training to adequately explain. But that subject is for another research project.
In looking at the two vote methods and the overall numbers, registered Democrats have an advantage, but in the past few days, registered Republicans have been increasing their share of in-person voting, especially. 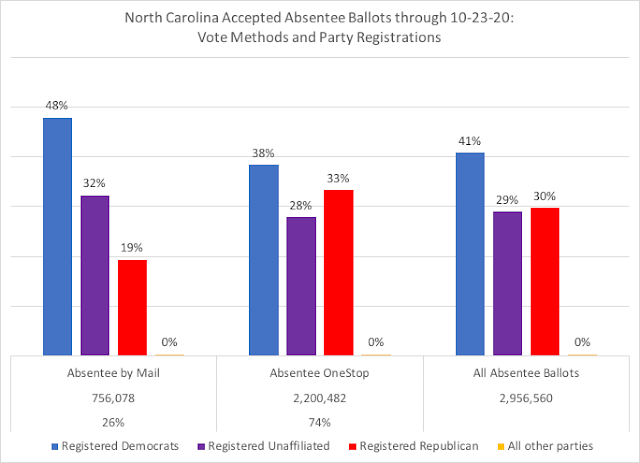 One can see that GOP rise in the second Thursday and Friday of early voting, with the daily Republican cumulative numbers exceeded those of unaffiliated voters. 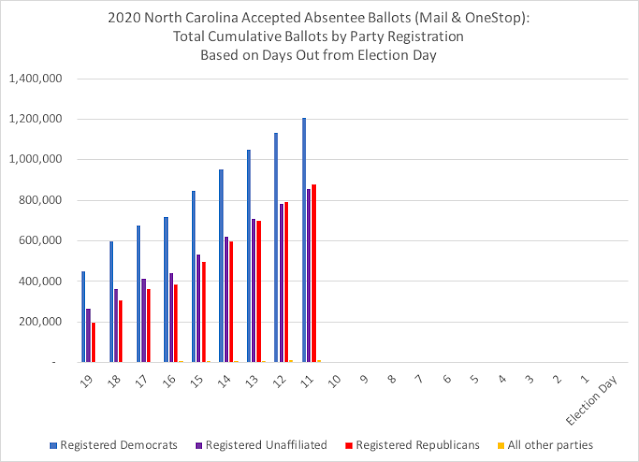 Here's the party registration percentages for the cumulative totals. 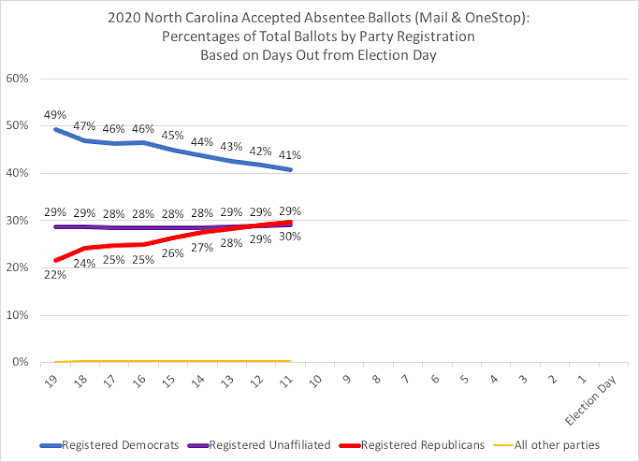 With nearly three-quarters of NC's early votes coming from in-person/onestop, the fact that a third of those ballots are from registered Republicans should be a heartening sign for the GOP.
However, the fact that they are below 20 percent of the mail ballots, when they have traditionally held dominance in that vote method (in 2016, registered Republicans were 40 percent, and 2012, they were 50 percent of mail ballots) seems to indicate the fact that GOP voters are much more likely to use in-person voting, due to the president's month-long attack on voting by mail. Democrats, perhaps more worried about public and individual health concerns, have nearly half of the mail-in ballots.
Among voter race-ethnicity, Black/African American non-Hispanic voters have seen their overall share of the total absentee ballots slip to 20 percent, down from 23 percent when the first in-person ballots started to arrive. 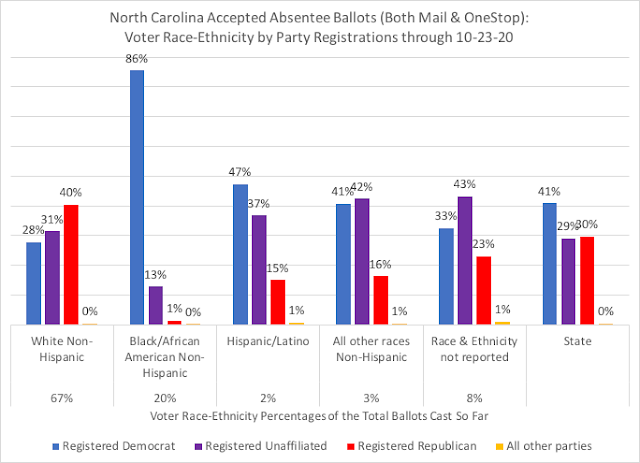 The importance of the Black vote in this state is critical to Democrats being competitive, and perhaps this weekend's last Sunday of early voting (known often as "souls to the polls" thanks to Black churches mobilizing voters to vote in-person) may have some effect. However, with the state's recent rise of COVID-19 cases, that dynamic may be somewhat blunted. We'll just have to wait and see how that plays out early next week.
Another important demographic dynamic are the generation cohorts. Among all of the state's 7.3 million registered voters, Millennials and Generation Z (meaning voters under the age of 40 years) are 36 percent, the largest group of voters in the pool.
However, the two youngest generations are only now 23 percent, having been 20 percent of the initial total absentee ballots. 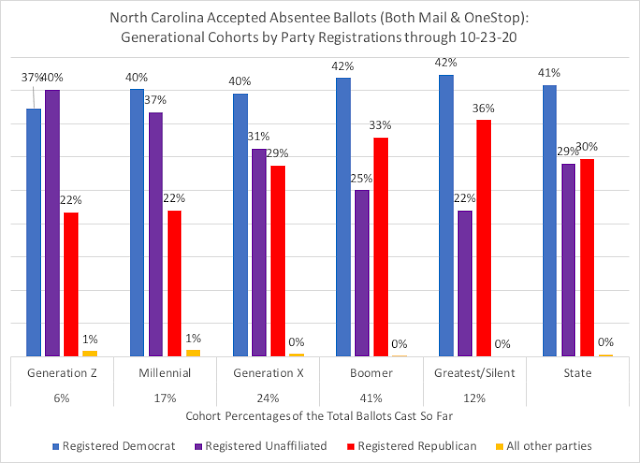 Boomer's share of absentee ballots have dropped from 44 percent early on to now 41 percent, so the generational dynamic and shift may become more apparent as we enter the last week of early voting.
Finally, the other important dynamic to watch is North Carolina's urban-suburbs-rural divide. 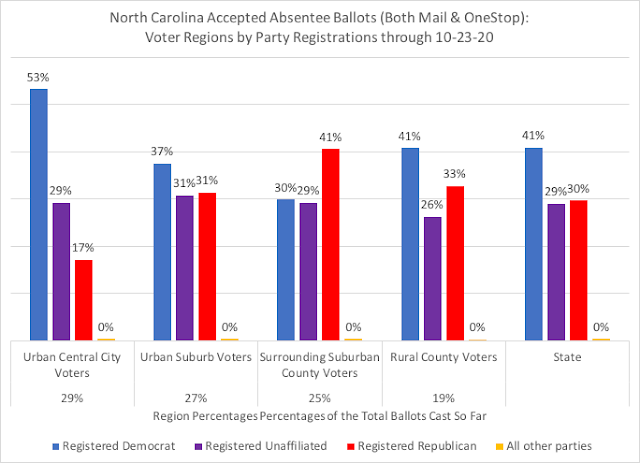 Not surprisingly, urban central city voters (Charlotte, Raleigh, etc) have over half of their early votes coming from registered Democrats (central cites are the most Democratic areas). And also not surprising, the surrounding suburban county voters (the state's most Republican areas) have 41 percent of their early ballots coming from Republicans.
But in the truly battleground region of the urban suburbs, registered Democrats are holding their own at 37 percent to 31 percent Republican. Considering that this region went for Clinton with 49 percent to Trump's 48 percent in 2016, this is an area worth watching closely.
Finally, in looking at how the nearly 3 million early voters in NC participated in 2016 (or didn't, or couldn't), here are the vote methods and registration periods for non-voters, by both the state totals and for each party registration. 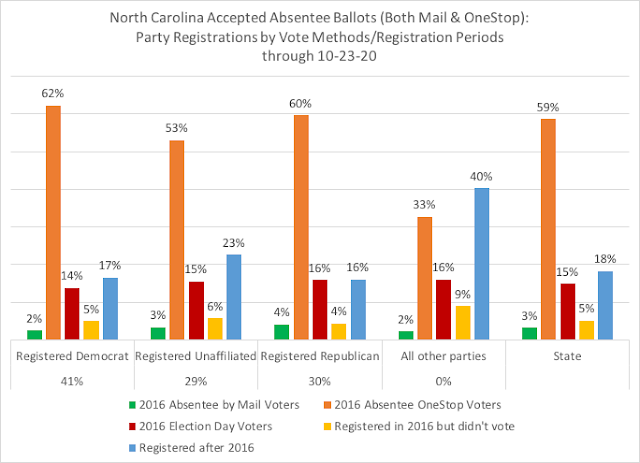 Some make much to-do about 'cannibalizing' consistent voters in early voting and not having folks for Election Day. But in 2020, as has been the case in recent presidential election years in this state, it's no longer "Election Day" but rather "Election Months" or "Election Seasons," and for the two party registrations, they are comparable in their numbers of current early voters who didn't vote (but were registered) in 2016 (5 percent of Democrats to 4 percent of Republicans) while those who have registered after 2016 are also comparable (17 percent of Democrats to 16 percent of Republicans).
But among registered unaffiliated voters, nearly 30 percent of this year's early voters with that registration are 'new voters' (6 percent are 2016 registered voters but didn't vote and 23 percent have registered after 2016).
Finally, I looked at the party's turnout percentages of what has been cast so far based on registration totals for each. 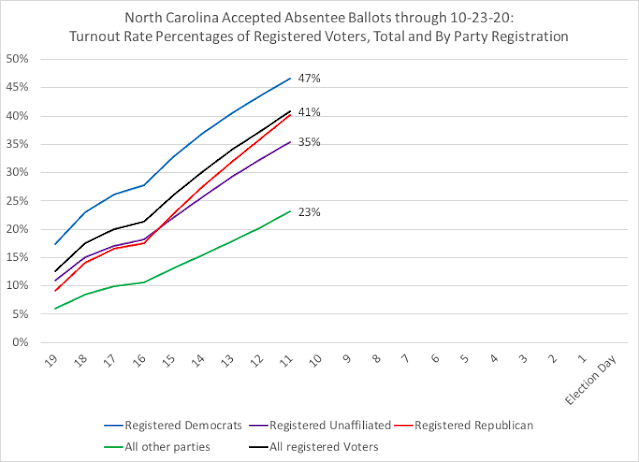 Through October 23, 41 percent of North Carolina's 7.3 million registered voters have already banked their ballots, with registered Democrats inching closer to nearly half of their registered voters. Unaffiliated voters are at 35 percent, with Republicans nearly matching the state percentage.
Among voter race-ethnicity, White non-Hispanic voters are slightly ahead (42 percent) of the state's 41 percent, while Black/African American non-Hispanic voters are slightly behind at 40 percent. 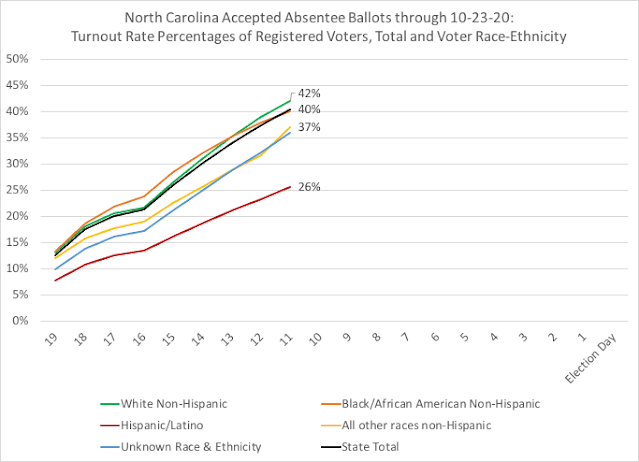 It's my assumption (and that's all it is) that North Carolina should meet and exceed all of 2016's early votes today (Saturday, October 24). Perhaps this is due to increased hours and days of early voting. Perhaps its due to voter intensity, loyalty, and enthusiasm. Perhaps its due to concerns about coronavirus. Perhaps it's all that and more.
But in thinking about where we may land when we hit next Saturday (October 31) and the final day of North Carolina's early voting period, with three days to go before actual Election Day, I did some 'back of the envelope' calculations to think about what we might see in the back half of early voting.
If we average 250,000 ballots cast each day in the second part of early voting as we did in the first part (the actual number is 254,854, and at this point, I need to say that's a big "if" but 2020...), North Carolina could see a total of 4.9 million ballots cast in early voting, before we even hit Election Day.
That's more than 2016's total number of all votes cast (4.7 million).
So, maybe we'll get a bigger scare with that potential NC early vote number than any mask or costume folks might don on Halloween.

Dr. Michael Bitzer is the Leonard Chair of Political Science and professor of politics and history and chair of the Department of Politics at Catawba College; he tweets at @BowTiePolitics.
By OldNorthStatePolitics.com - October 24, 2020