With the end of May and now the Phase 2 reopening of North Carolina (even though COVID-19 cases in the state are increasing), many are wondering about the economic impact on the state from the stay-at-home order from mid-March. From my point of view and research interest, another area is about voter registration and what has happened over the first five months of 2020. Articles are drawing attention on the drop of new voters across the nation since the pandemic began, and recent actions by the NC General Assembly have sought to loosen the requirements on using absentee vote-by-mail for this year's election. 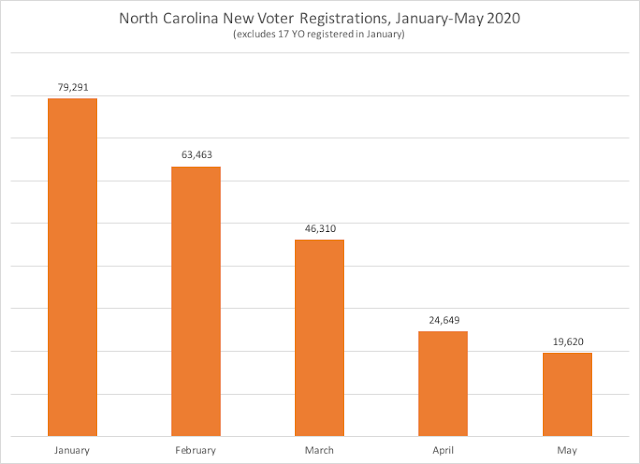 To have gone from nearly 80,000 registered voters at the beginning of the year down to less than 20,000 seems to be a significant drop. Some might speculate, well, after a primary election in March, wouldn't voter registration trail off and then pick back up with the beginning of the fall campaign?

One can answer those questions with comparative data from 2016 (the last presidential election year) and 2018 (a mid-term election year), both with March primaries. 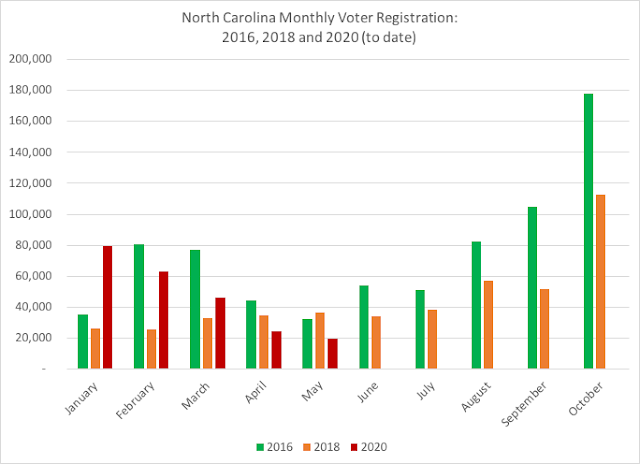 While 2020 had the highest number of new registrations of the three years, the drops in both April and May of this year reflect the lowest numbers compared to 2016 and 2018.

In comparing the cumulative numbers of 2016, 2018, and 2020's new registrations, 2020 was certainly acting like a presidential year, in terms of numbers, until April, when the cumulative line dipped below 2016's numbers. 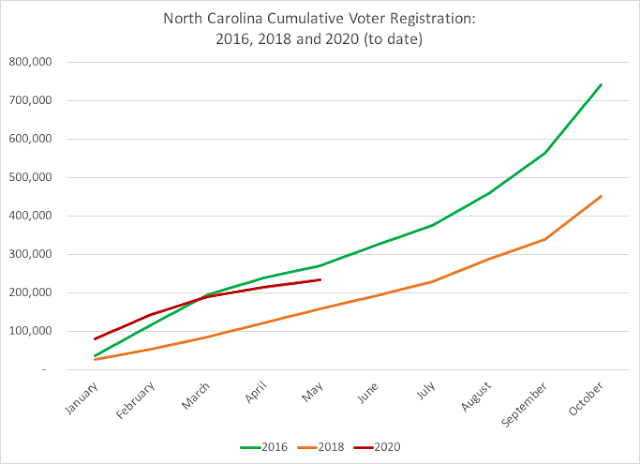 So it would seem that COVID-19 had an impact on new registrations so far this year.

In looking at new monthly registrations, some distinct patterns are evident early on, but the later months seem to hold a consistent pattern.

In looking at the numbers and percentages by party registration, January started with a significant plurality of voters selected 'unaffiliated,' while in February, before the March primary deadline for registering, Democratic registration saw a jump. 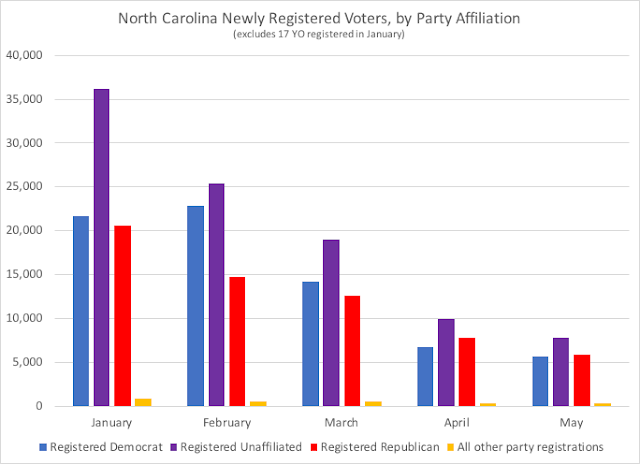 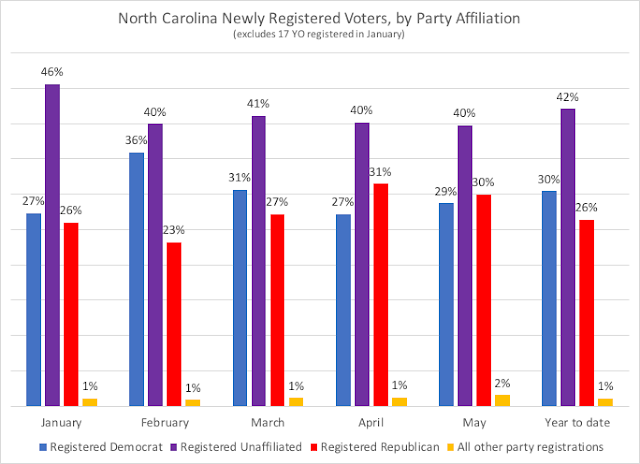 In looking at voter race among the new registrants in North Carolina, an interesting break in white versus voters of color happens after March: 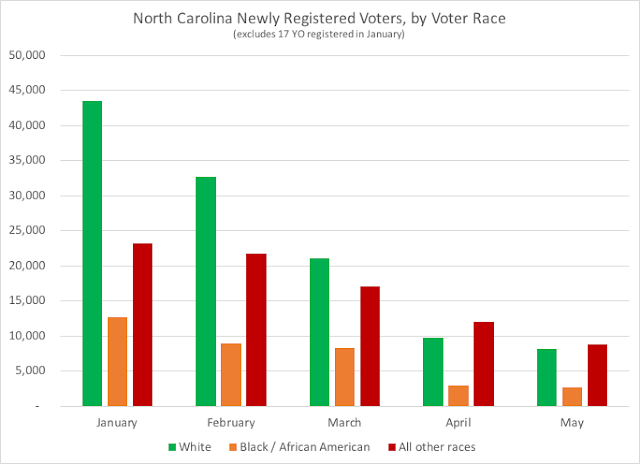 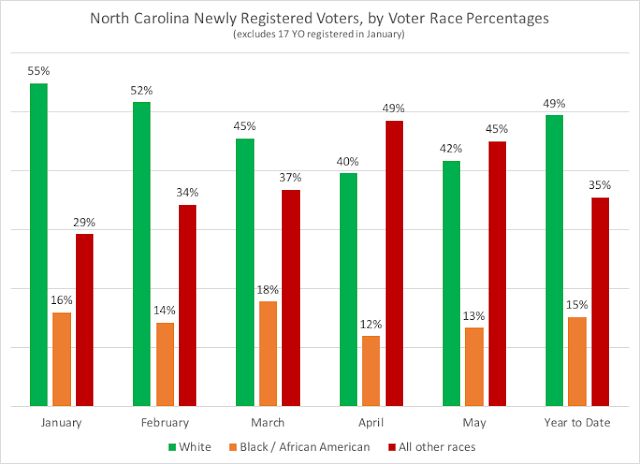 In breaking down the new registrations using a collapsed race classification ("all other races" are Asian, American Native/Alaskan Indian, multi-racial, other race, unknown/unreported), the spike in April and May of "all other races" lead me to break out the races into all categories, as reported by the Board of Elections. 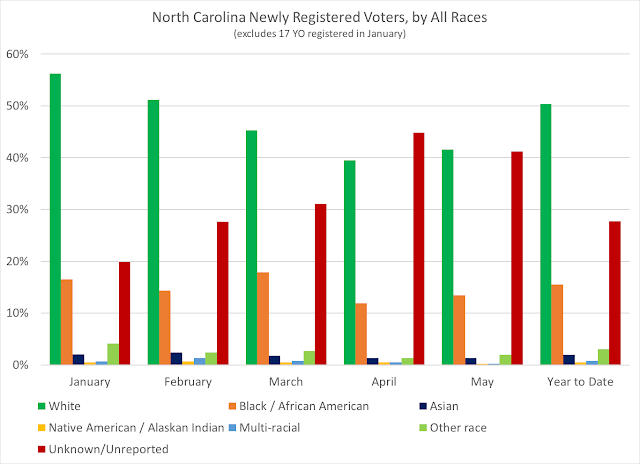 The rise of "unknown/unreported" is what drove the April and May increases; and within this group, it is voters under the age of 40 who selected "unknown" or didn't report a racial category. Millennials and Generation Z constitute two-thirds of those who reported "unknown" or chose not to report a racial category among the 2020 new voters in the state. 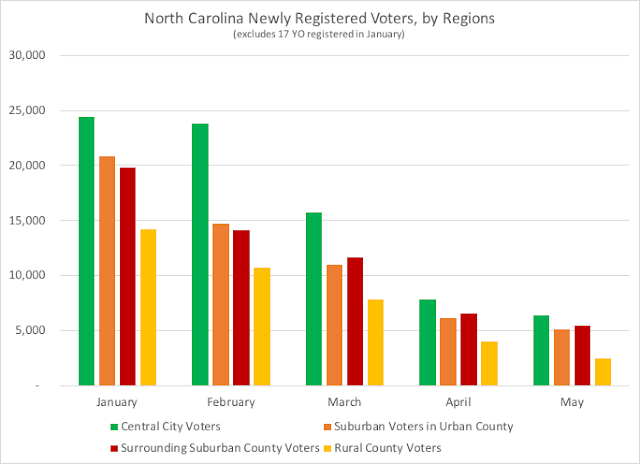 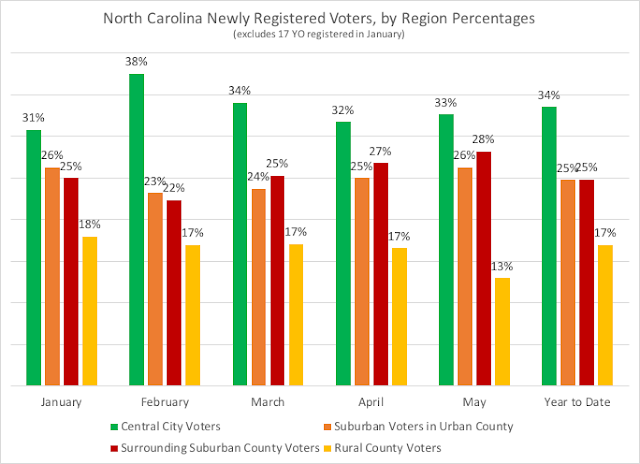 By the end of October 2016, nearly 750,000 new voters were registered in the state from January of that year. In order to make that same total for the 2020 election, each of the five months between now and November would need to add slightly over 100,000 voters.

This could be an important trend to watch, in conjunction with a competitive battleground state and the continuation of the COVID-10 pandemic.
By OldNorthStatePolitics.com - June 12, 2020